The Monaco Grand Prix rounded off an epic week that saw Real Madrid make history, as did the Gujarat Titans, and some of the big names of tennis forged ahead in their bid for that red clay glory that is the French Open. In the world of motorsport though, it was only heartbreak and fury for local boy Charles Leclerc, as Max Verstappen climbed back to the top.

Confusion, chaos, and controversy. The commentators on the sport could not have summed it up better when describing what had been a rather long Sunday in the Monaco GP. If the Spanish Grand Prix was confusing in terms of how fortunes see-sawed, the Monaco Grand Prix became one of patience, endurance and composed heartbeats.

For a second consecutive week, Leclerc who positioned himself as a serious championship contender from the outset this season, was forced to contend with unexpected twists. Max Verstappen, the current reigning champion, took the lead on the world drivers championship leaderboard at the Catalunya circuit and then held onto it by mere mature consolidation by the end of the rain afflicted Monaco Grand Prix.

“What are we waiting for?” Verstappen radioed his team even as the race initially began, with behind the safety car in the formation lap. The delayed start was further held up as it rained ominously, the race stewards deemed it too dangerous to continue even as others wondered about races in the past that carried on in the rain. A ten minute hold up turned into an hour’s uncertain wait. The rolling start was in contrast to the traditional standing start on the grid which was considered too risky on the street circuit, which is already facing an uncertain future in an increasingly crowded F1 calendar.

Charles Leclerc is now sandwiched between the two Red Bull drivers, Max taking a slim 9 points lead while Sergio Perez, after that outstanding win in Monaco, is now only six points behind the Monegasque driver.

It was a weekend that needed a thunderous response from the world of motorsport even as other sports fought for allegiance and eyeballs. Real Madrid continued onward on their road to history, winning the UEFA Champions League trophy by beating Liverpool, who have been chasing a treble of success themselves and losing out to Manchester City only last week. But that was not before the French authorities had to contend with an embarrassing situation of security concerns, and fans overwhelming the stadium, causing a delay of over half an hour before the final could get underway.

The French government and the football authorities have some damage control to do even as the French Open, the second major Grand Slam of the year in the world of tennis, has been pushing players into talking about the special feeling of the Olympics coming to Paris in 2024. This security situation and police action has punched a few holes in that preparation, something the French would want to repair in a hurry.

The French Open itself is turning into business as usual, particularly in the men’s draw as Novak Djokovic and Rafael Nadal, the latter stretched by the relatively unknown Auger-Aliassime to five sets in the round of four on Sunday for his quarterfinal booking, keeping the old guard flag flying. Younger tournament frontrunners like Germany’s Alexander Zverev and Greece’s Stephanos Tsitsipas are giving the crowds plenty to cheer, and boo about. They are blowing hot and cold while making it count, coming through marathon matches in the early rounds where they eerily echoed similar comments about their opponents such as “he drove me crazy!” on late nights in Paris.

The titan clash seems set with Nadal on track to meet Djokovic in the quarterfinal to set up a champion versus contender challenge for the semi final draw.

Indian Premier League was turned on its head

Speaking of titans, the Indian Premier League was turned on its head. Newcomers Gujarat Titans took on the first ever IPL champions, the Rajasthan Royals, at the Narendra Modi stadium in Ahmedabad, hiccupping before reigning supreme with a seven wicket win. This match too got off to a delayed start because the BCCI decided to go big, bringing back a closing ceremony, to a tournament that has seen the usual suspects retreat, while new teams made a big splash.

It might have been an anticlimactic finish for the Royal Challengers Bangalore looking for redemption in Qualifier 2. And it might have been bittersweet for the Lucknow Super Giants who will now look enviously at the Gujarat Titans, having come so close. But in the end, it would seem that business is booming which is what matters to the BCCI with the new teams in no way compromising the quality of the game, this edition being one of the most open in the tournament’s history with only the Chennai Super Kings and the Mumbai Indians chasing the wooden spoon.

Speaking of chase, unfortunately the wheel-to-wheel action on the rather wet Monaco track had to wait for nearly three hours, before the final 15 minutes made it an edge of the seat drama. Ferrari lost the race within the first 25 laps of the Monaco Grand Prix, compromising Leclerc’s lead yet again. It was pure heartbreak after an engine failure– a turbo failure – sunk Charles’ hopes despite a massive lead in Catalunya, and it was anguish all over again for the Monegasque driver as a botched pit line up and strategy saw him drop out of the chance of winning his first race from pole at home for a second year in a row.

While Ferrari eventually followed Carlos Sainz’ suggestion to switch to hard/slick tyres while most teams opted for intermediates for their pit stops, the second pit stop within ten laps that spanned lap 14 to lap 22 meant that Ferrari not only played spoilsport to their own lead driver on track but also, ended up playing a befuddling plan where Leclerc was pounding his steering wheel in frustration waiting for Sainz to be fitted with new tyres in a double stack pit stop that saw him lose valuable seconds.

That Ferrari plan was quickly followed by the Red Bulls reducing any chance of an undercut, and Sergio Perez taking the lead. It was a moment of glory for the Mexican driver to have finished first in Monaco in the end by keeping his cool and making the most of his opportunity, making him the most successful Mexican driver with three wins to his name, beating Pedro Rodriguez.

The win was also important from the point of view of maintaining decorum in the Red Bulls camp after Perez was an unhappy man after the Spanish Grand Prix. Verstappen struggled with the DRS and was held back by Sainz while Perez was clearly the better driver with the faster car. Perez felt let down that while he had given his team mate the heads up with an early choreographed overtake with the promise that the favour would be returned, he felt betrayed when it wasn’t.

Ferrari’s reliability issue was pure anguish for Leclerc who had taken a significant lead and although fortune swung the way of the trier that was Verstappen in Catalunya, there was a feeling of Perez being undermined.

Perez winning Monaco on his merit notwithstanding Ferrari’s misfortunes while Verstappen had to contend with the limitations of the car under his control has not only pulled one back for the harmony in the Red Bulls garage but also, puts up an interesting proposition where both drivers are now inches on either side of Leclerc in the three way battle at the top of the world’s drivers championship.

Perez did not have it easy, having to forge his way and also, in the end, keep off a fast catching Sainz who seemed absolutely gutted to finish second in a season that has already seen the Spanish driver warned twice for driver safety and ended up with two first lap exits. It says a lot about the tenacious driver who was also the hero of the final race of the 2021 season, defending against Hamilton and in many ways, ruining his race in favour of Verstappen.

Lewis Hamilton’s race was once again ruined, stuck between the two Alpines for the better part of the race in Monaco despite changes to his car ahead of the Spanish Grand Prix. It speaks to the vulnerable mindsets that the seven time champion was ready to throw in the towel very early in Catalunya when despite a great start, his car made contact with Kevin Magnussen of Haas to set him back with a punctured tyre and damage to head to the back of the grid. Soft persuasion from his radio crew kept him on track to finish within the points which would have done his confidence a world of good in what has been a rather poor start to his year.

In Monaco, if his collision with Estebon Ocon set his mood for the rest of the race, Hamilton’s resurrection for a second race in a row was not helped by the fact that he lost time, stuck behind in eighth position where he began the race.

It was Ocon’s team mate, the former champion, Fernando Alonso, who dictated the race pace for the rest of the pack post the safety car on lap 30. With tyre management the need of the hour, the Spanish driver kept the rest of the pack lagging significantly behind the Red Bull-Ferrari-Red Bull-Ferrari train at the front such that even Hamilton’s engineer was not willing to let his driver know how far behind the leader he was so as not to demoralise him.

Gambling on medium tyres, a change accorded around lap 30 with the safety car coming on for Mick Schumacher’s crash, Red Bull had to play a nursing game, holding onto their positions while trying to finish ahead of the Ferraris which they did. Whether the call about the start of the race due to weather conditions actually makes the case for or against the Monaco Grand Prix is another matter and remains to be seen.

In the end, it came down not to the lap remaining but rather time in Monaco. A similar adjustment paid off for the defending champion as well. Will that keep Monaco still in F1's schedule after such chaotic drama as one of historical significance?

Something has to be said for the way Verstappen led the way on the maturity board. Citing early low key free practice sessions on Friday, the defending champion knew he was up against it as far as getting on the podium in Monaco was concerned.

Playing a rather quiet game, Verstappen chose to stay back, wait for his moment and then consolidate his place. He played to perfection and subtlety through the weekend and through the race, being rewarded with a final place on the podium, even if only one spot ahead of Leclerc. This is where he needs to be to finish this season as he did the last – ahead of the competition. 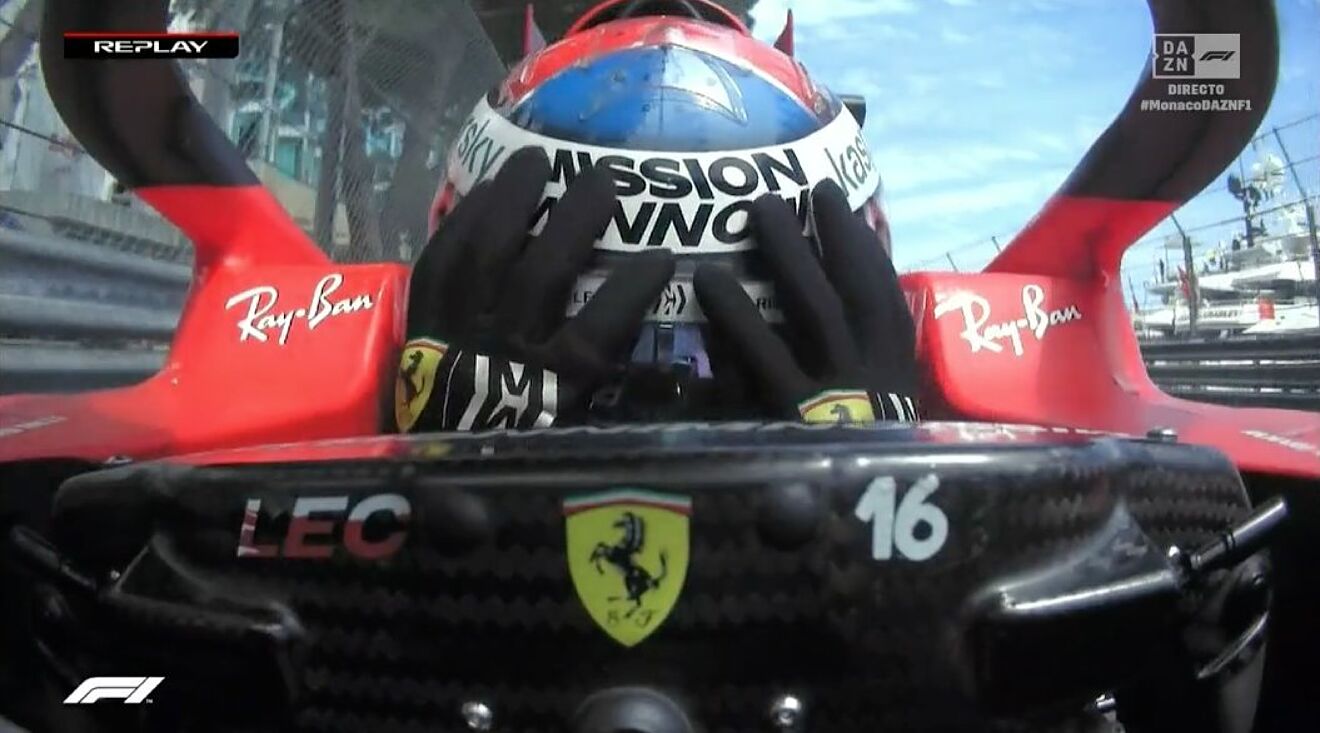