Both Rafael Nadal, and the women’s games have remained in the spotlight

Did Amelie Mauresmo, former Grand Slam champion and current director of tournament at Roland Garros, have to apologise what a majority of tennis lovers were thinking about the men’s game being far more popular?

While that is a highly contested debate, what is not in question is that while Rafael Nadal kept his affair with Paris ongoing, the French Open has lost some tact and dare one say, viewership, over the controversial scheduling of the game in the second week.

A Semi Final to Remember

Picture this. A packed stadium. Clay court legends present, including the coaches on either side. Sergei Bruguera and Carlos Moya, amongst others like Gustavo Kuerten and Henri Leconte sharing space alongside Hollywood celebrities as the evening sun was only beginning to come into prominence.

On court was the 36-year-old king of clay fighting to reclaim the throne. His place threatened in the semi final by a lanky German, who seemed to be wrestling with his best self, with Nadal looming large at the net, or with a rare forehand, down the line winner when it mattered. Three hours later, the game was no better in terms of deciding a winner as the second set, like the first set, went to a tie breaker. But the outcome would never be decided.

Reaching for a ball too far from him, Alexander Zverev used his 6 foot 6 frame to full extension, but crucially rolled over his ankle. The reaction was as immediate as it was haunting, in a stadium that went pin drop silent soon after. Zverev screamed in agony as he clutched what appeared to be his lower shin, above the ankle. So unprepared were the tournament organisers that there was a clumsy attempt to first get the player back on his feet, and then an agonising wait on one foot while a wheelchair was rolled out for him.

The crowd’s chatter was dimmed out of respect. The whispers were startled rather than animated. The verdict seemed almost immediate. Nadal was in sight of a walkover, fortune favouring the last man standing amongst the big three, keeping the upcoming generation at bay for another season in time.

Few in the know remembered that the German Zverev was emulating to make the French Open final, Michael Stich, had a similar ankle injury that nearly put paid to his tennis career. However, this was not before one last final hurrah which saw Stich make the final of the 1996 edition against eventual champion Russia’s Yevgeny Kafelnikov. A tearful Stich was grateful to have been able to put his foot back on hallowed turf.

Nadal was anxious and restless. He too it seemed was haunted by Zverev’s excruciating moans. He suddenly unplugged from what had been a high intensity match with endless rallies, deep points, and resounding aces. And even he knew that as he was breaking the German on the crucial points to get himself back on track. This was not the way he wanted to prove his supremacy.

One almost felt sorry that the match to follow, the second semi-final, given how the Nadal versus Zverev match was going, was played before television spectators as well as in-stadia audience to more muted tones. It was hard to recover from the shock of what had been a riveting match that saw Nadal robbed of rightfully fighting for a spot in the final. It robbed the Olympic gold medallist of a first Grand Slam and tennis fans of a heart stopping match.

A fiery debate over an obvious concern

This was all in the midst of another fiery debate on the side lines that involved the complicated and confounding night schedule for some of the men’s matches, and the baffling response from fans who were either aggrieved by the timing or by the disparity of how the men’s matches were scheduled vis-à-vis the women’s.

Amélie Simone Mauresmo, a first time tournament director, was candid in her admission that there was no easy way to put the women in the spotlight in the night matches. The former women’s champion who coached Britain’s Andy Murray in the men’s section stated, “concerning the scheduling, specifically for the night matches, my say was that because we have one match (at night), it’s really tougher to schedule a women’s match because we have to take into consideration the length.”

That point was of course overlooked amongst the more staggering but truthful statement that was put bluntly by Mauresmo, “in this era that we are in right now, I don’t feel bad or unfair saying that you have more attraction, appeal in general, for the men’s matches.” She pointed out that there was not enough star power in the women’s section to schedule a match at night.

Iga Swiatek did pick up her French Open trophy ahead of Coco Gauff. But controversially enough, while she stated her disappointment at Mauresmo’s comments, it was easy to see why the women’s game lacked “appeal”, a word Mauresmo was helped to at the press conference after running through a vocabulary in her head that also, included words like “unattractive”.

There was only one night when the women players played while the timing of the men’s matches at night might have appealed to the local Parisian crowds, it did not endear itself to some of tennis’s worldwide fans including in Asia. This included fans in India who did not like the fact that reluctant graveyard shift player, Nadal, played out a four set thriller against Novak Djokovic in a match that lasted over four hours. This took fans in India and Asia into the wee hours of the morning, having started past midnight.

Billie Jean King had an interesting take that might sit well with Nadal as well going into the future should the now 14 time French Open winner and 22 Grand Slam holder decide to lengthen his career further still into his epoch making graph. King, herself a part of the original nine who brought the women’s game to the forefront of attention, talked about the need to bring the women’s game out of the doldrums.

While some called it the hangover of the Steffi Graff-Monica Seles era and of the subsequent Williams sisters dominance for why the women’s game is struggling to win over loyal fans, there is also something to be said for the longevity and dominance in the men’s game rather overwhelmingly by the big three who are well past the traditional prime age even for men as the battle of the Grand Slams only gets more fascinating between Nadal, Djokovic and Roger Federer.

“It (the women’s game) will stay that way (lack appeal) if we don’t have more matches, that’s for sure,” said Billie Jean King. “You’ve got to put them on when it’s prime time, and you have got to figure it out, and you want to give equal opportunity to both genders. Always. If we keep treating us like second-class citizens, we will stay second-class citizens,” she added.

The men versus women’s game debate

The men’s game has not gone unchallenged. Djokovic, Nadal and Federer have had to not only brace to overcome each other over the years but also, strong opponents such as Zverev, Tsitsipas and this tournament’s finalist, Casper Ruud. While some might claim that the men’s matches have been edge-of-the-seat action with sets going longer, with the results rarely in straight sets, others could argue that the results were the outcome of larger-than-life players and big contenders blowing hot and cold which would not be out of place.

Either way it would be hard to refute as well as not empathise with Mauresmo for speaking her mind even if she was forced to eat her words. But the spotlight was already shed on the pestilent problem in the women’s game that few will dare to shed a light on.

While the night matches might have won the Parisians over, passionate tennis fans in Asia and Australia are not happy. While the women have received a setback to have one of their own call out the obvious dearth of viewership, there is no doubt that the women’s game needs to be given a greater spotlight while also, the WTA introspect themselves at this crucial juncture about how to boost their own game into the arc lights.

As unfair as it is, it is arguable that Iga Swiatek got as much attention or even a standing ovation as Zverev received when he hobbled out on crutches moments after disappearing behind the court to receive medical attention, only shook hands with the chair umpire and waved briefly to the crowds.

Closer home, tennis’ existential crisis vis-à-vis the women’s game which seems almost chronic at this point resembled what it felt like as the women cricketers played a quasi tournament in the break between the IPL playoffs to eerily empty stadiums. Is anyone listening? They seemed to ask no one. Who is to blame here: the market that won’t back these players as primetime worthy probably because that is not the diet the fans have grown up on? Or the tournament organisers who do not yet believe it is worth putting these eggs – not golden in their opinion, not yet anyway – in the basket alongside the men?

Meanwhile the men’s singles final turned into a fanboy moment that almost guaranteed Nadal a cakewalk or something close to it en route to etching his name once more in history. Casper Ruud, the first Norwegian to make the finals of the second Grand Slam of the year, was clearly in awe of the king of clay, not hiding his unabashed adulation of the Spaniard. Whether this played into how he played the game, and whether his mindset of feeling like it was an honour to simply have made the final on the other side of the net against his childhood hero and someone who has trained at Nadal’s academy, is also up for debate.

Fortunately for Casper, he is just 21 and has the potential to overcome this hiccup. The women’s game too might need to work harder as there is every reason to believe it might just become primetime fodder next time round in a knee jerk reaction to this year, representation for representations’ sake in front of very partisan French crowds and even more vocal tennis fans around the world.

Meanwhile the Rafa train chugs along at Roland-Garros. 14 titles. 22 Grand Slams. History making. The age defying Spaniard keeps his date with the red clay juggernaut for yet another year. 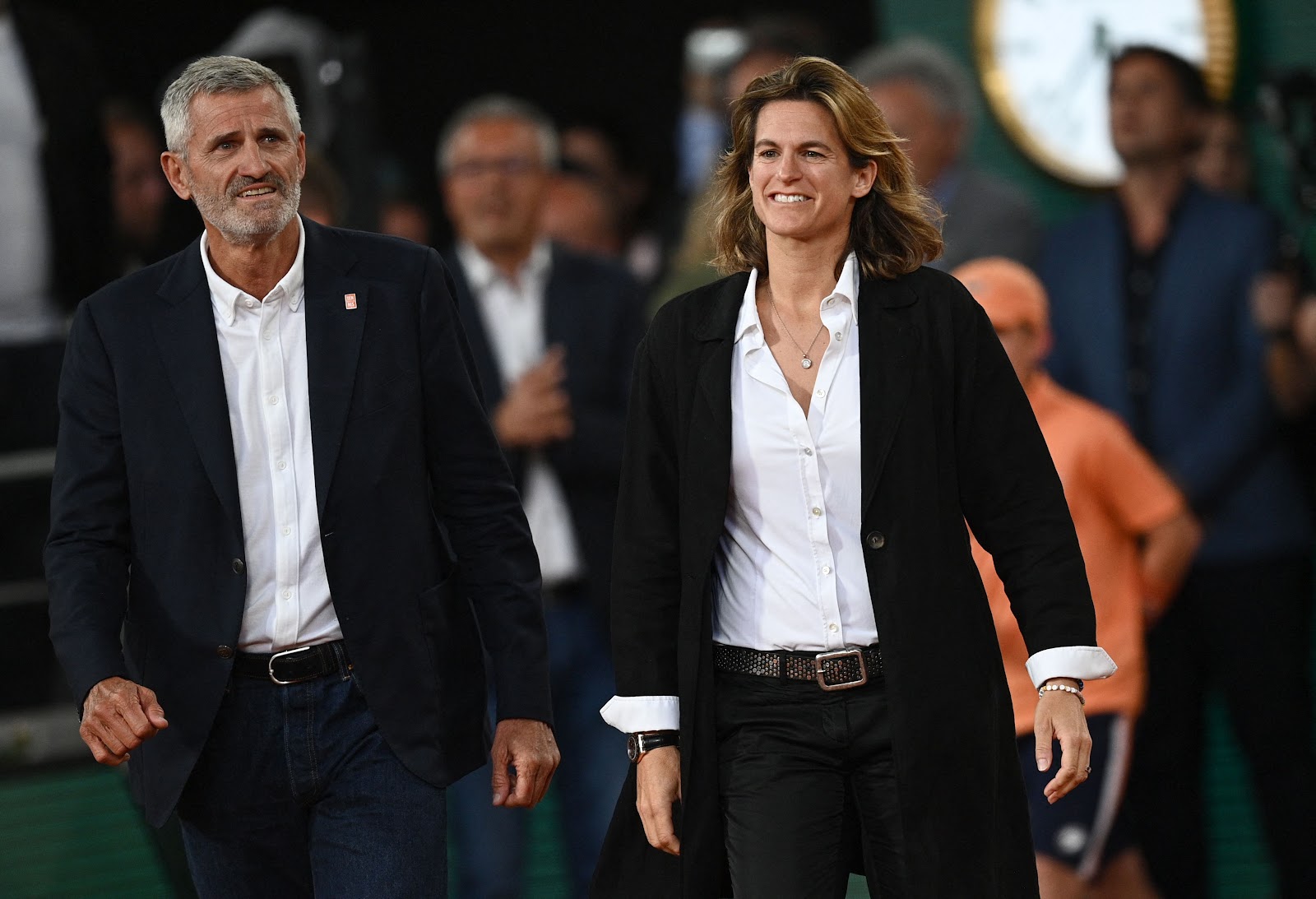