An Uncertain Future for Horticulture in Kashmir

About half the valley’s economy depends directly on horticulture

SHOPIAN, KASHMIR: Before November 7 as one travelled from north to south in the valley, foliage everywhere was turning autumn yellow. The apple harvesting season, which started late this year, was nearing its end. Apple boxes were still in the orchards, pending packing, and in the higher reaches of the valley the crop was still to be harvested.

That evening the whole valley was engulfed by a dense fog and clouds loomed large in the sky.

By late evening a gentle snowfall began, setting farmers in motion. They covered their valuable produce with tarpaulins to protect it from the moisture. But they hadn’t expected the snow to continue.

A few farmers tried to dislodge the accumulated snow from the trees next morning. But the snow fell heavier with each passing hour and continued through the night.

One could hear the cracking of branches that night, that couldn't bear the load of accumulated snow.

Next morning, few trees were upright and without injury. One couldn't distinguish between the trees: apple, pear or cherry, all were broken and forced apart.

“We were about to go for pruning, but we had unpicked and unpacked apples on the trees. We could not carry it out and see now what happened with our orchards," said a moist eyed Muneer Ahmad, pointing to his uprooted and broken apple trees.

He had opted for fruit growing after leaving truck driving. His five-kanal orchard is his lone source of livelihood. 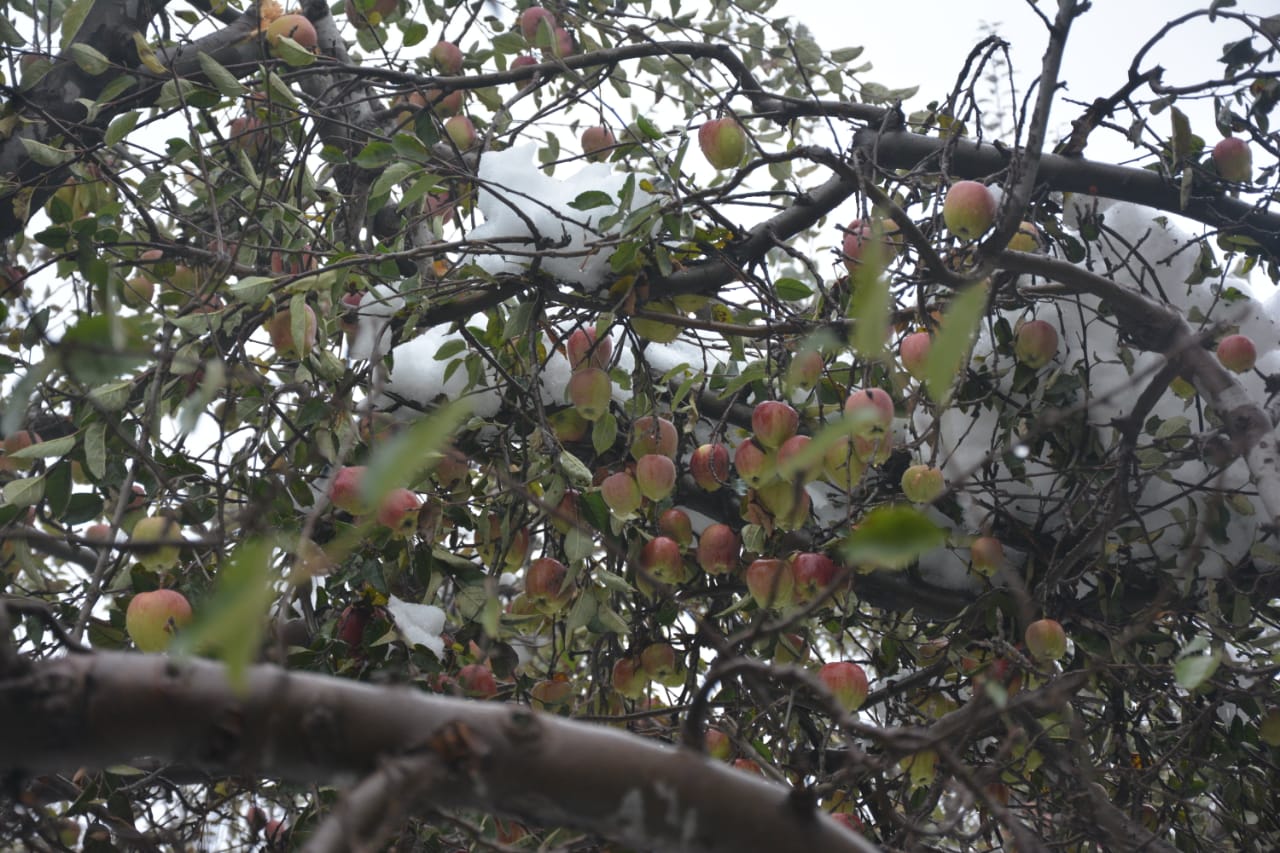 The much talked about horticulture sector in Kashmir is facing a crisis, which if left unattended might lead to its downfall. Climate change in the form of early snowfall, market dynamics in low rates, and political uncertainty are all gnawing at this vital sector.

About 50 percent of Kashmiris’ economy is directly dependent on horticulture and it is the main source of employment here.

The apple harvesting season this year was running around 20 days late due to the circumstances prevailing since Parliament struck down Article 370 on August 5, due to which orchardists had to postpone the pruning process.

This year’s early snowfall left a trail of destruction in its wake. In many places, heaps of uncovered apple sustained cold injuries and farmers had to wait till the snow melted.

Farmers instead of packing their produce are busy mending their trees, using steel bolts, ropes and nails. Due to high demand, the prices of these products skyrocketed within a few days.

The sector saw damages due to early snowfall last year as well. But farmers say that last year the damages were much lower. 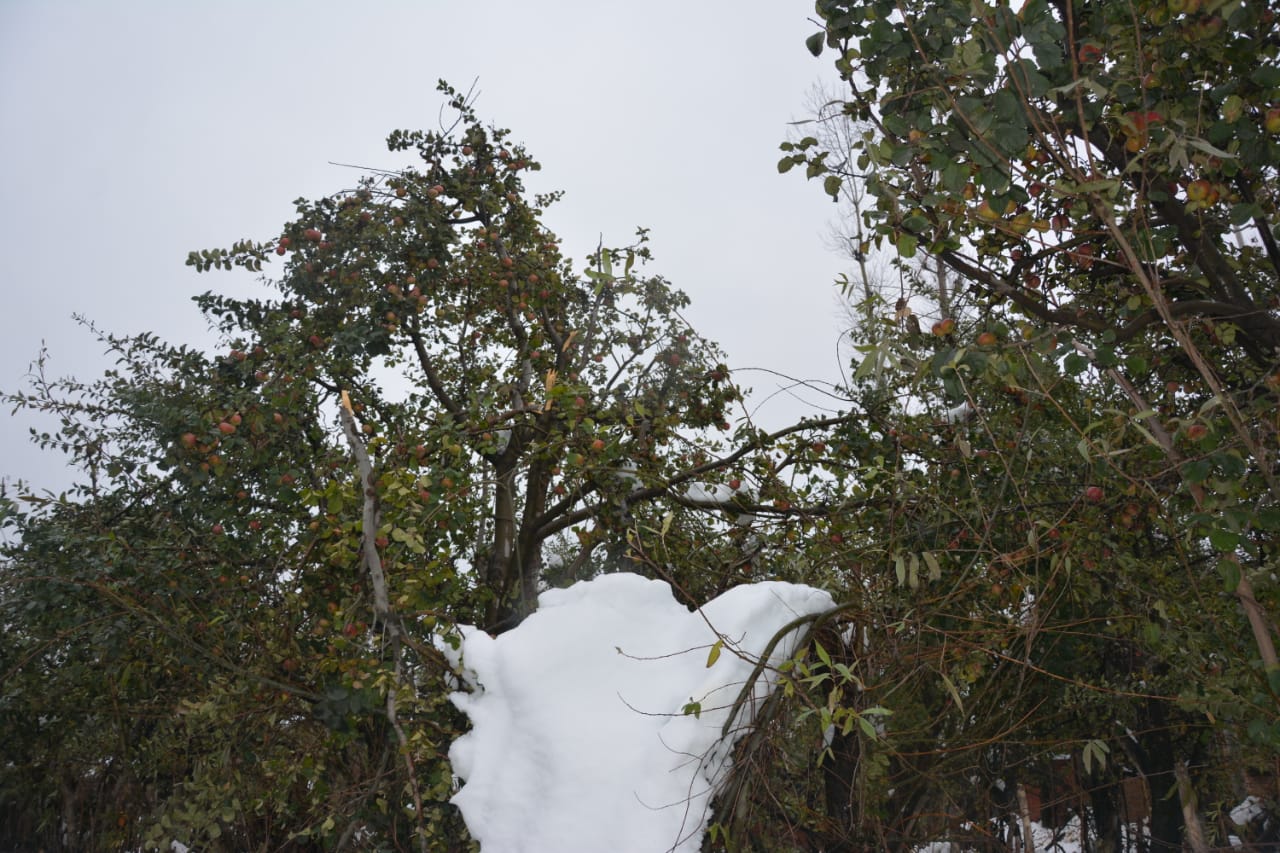 “Two and a half feet of snow was recently recorded which caused a major loss to the horticulture sector,” said an official in the J&K administration’s Department of Meteorology. He said this year snowfall was similar in the plains as well as the upper reaches, unlike the past when the plains would receive less snow.

According to experts, the breakout of disease (secondary stage scab infection) between August and September this year forced many orchardists to spray costly fungicides on their crop. These along with frequent rains in the same period kept the leaves greener and prevented leaf fall. Consequently, snow accumulated on the leaves, adding weight to the trees, contributing to their breaking.

Earlier, following the uncertainty after Parliament nullified Article 370, the majority of non-local labourers left the Kashmir valley. Earlier still, the government had issued an advisory asking outsiders to leave the valley.

Their absence put the whole workload upon the growers and local labourers. They were forced to pick and pack their entire crop by themselves, resulting in more delays.

As many as 10 non-local drivers, labourers and traders were killed in different parts of south Kashmir by unknown gunmen. The killing of outsider truck drivers forced many of them to leave without loading. Local truckers took advantage of the killings and imposed double fares, adding to the worries of farmers.

Hilal Ahmad Bhat, a fruit trader from Shopian district said that truck drivers imposed a fare of Rs 160 a box to Delhi markets this season, which according to him was Rs 80 last year.

Last year due to incessant rains, even during the normally dry month of March, the highway was closed due to landslides. Farmers started selling their cold-stored produce early in the month. Due to closure, farmers couldn’t send it to the outside markets on time, and it spoiled. 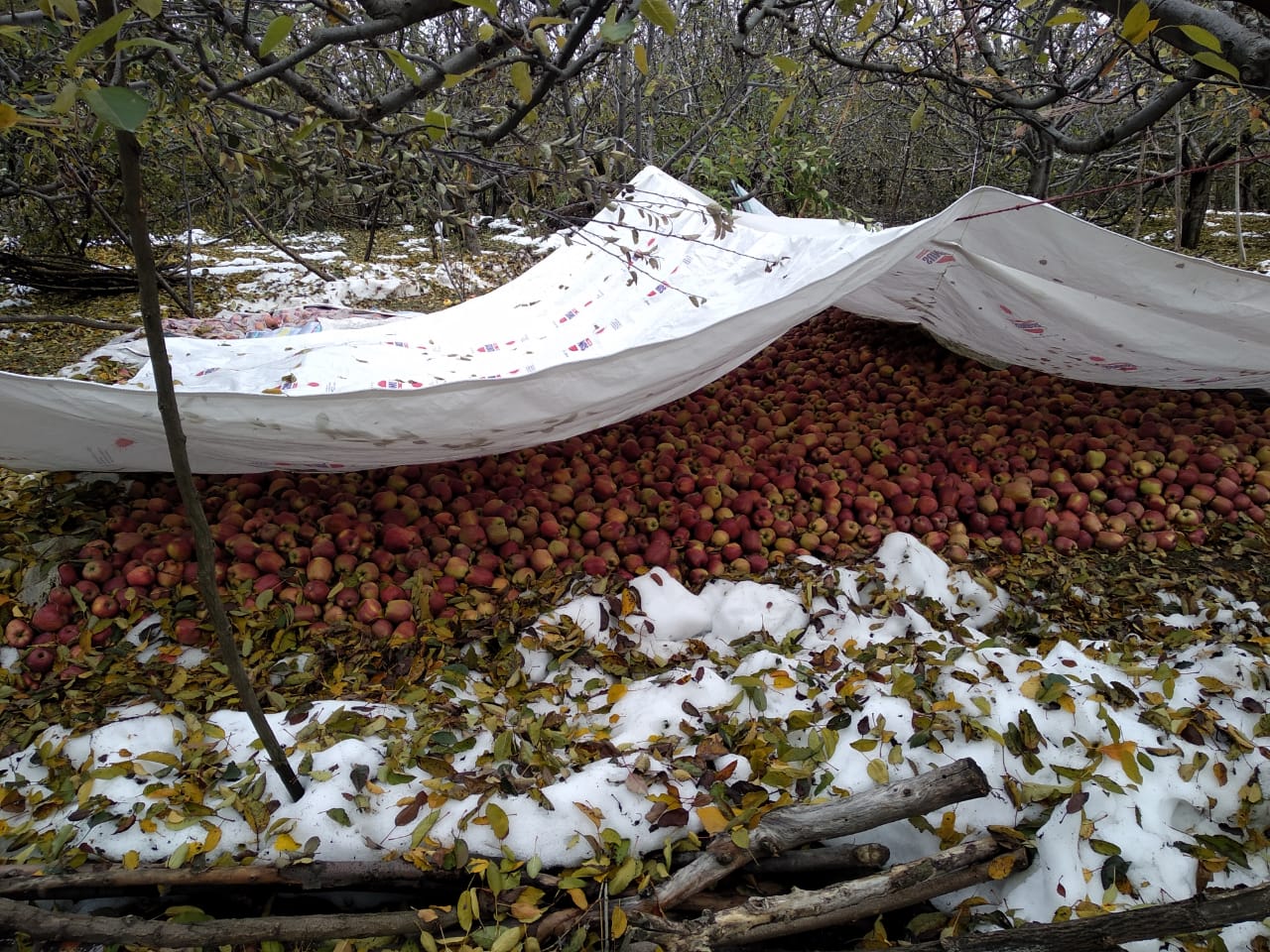 Earlier in the season, due to the highway being blocked by the authorities, fruits couldn’t be supplied on time, disturbing the demand-supply chain, costing farmers.

Gopal Das, chief executive at a marketing firm based in the New Subzi Mandi, Azadpur, Delhi said that there were several reasons for the decline in prices of Kashmir apples.

“This year hailstone-affected fruit laden trucks reached the market at the start of the season. Also, trucks were stopped at the Kundli border before entering, and given the temperature differences and the humidity under the plastic covers, the fruits spoiled. Hence the hence lower market rates," he said.

Das too sees the demand-supply imbalance as a contributing factor to the decreasing rates, saying that they can handle around 300 trucks at the mandi on a particular day, but at times more than 1,000 reach the market.

Many areas like Pakharpora, Keller, Baramulla, Bandipora, Pulwama, Shopian and Sopore in Kashmir this year saw hail during the summer which badly destroyed the standing crop.

A director in the J&K government’s horticulture department said it had forwarded the reports of losses caused by hailstones to the central government. However, farmers in these areas said they haven’t yet been compensated.

Market rates have taken a downslide, hovering around Rs 500-700 for A-grade this season, while input costs on fertilisers and pesticides have constantly been increasing.

Nazir Ahmad Lone, a farmer from Kulgam, said that “Preparing a 16-20 kilogram apple box costs around Rs 250 to 300, from harvesting to packing, excluding transportation charges, and the same box gets Rs 500-700 at maximum in markets outside. This in itself depicts the crisis we are facing.”

Farmers in the region take loans from banks at the start of the season to buy fertilisers and pesticides, and this time most haven’t been able to pay back. Most farmers who were interviewed for this story have defaulted. 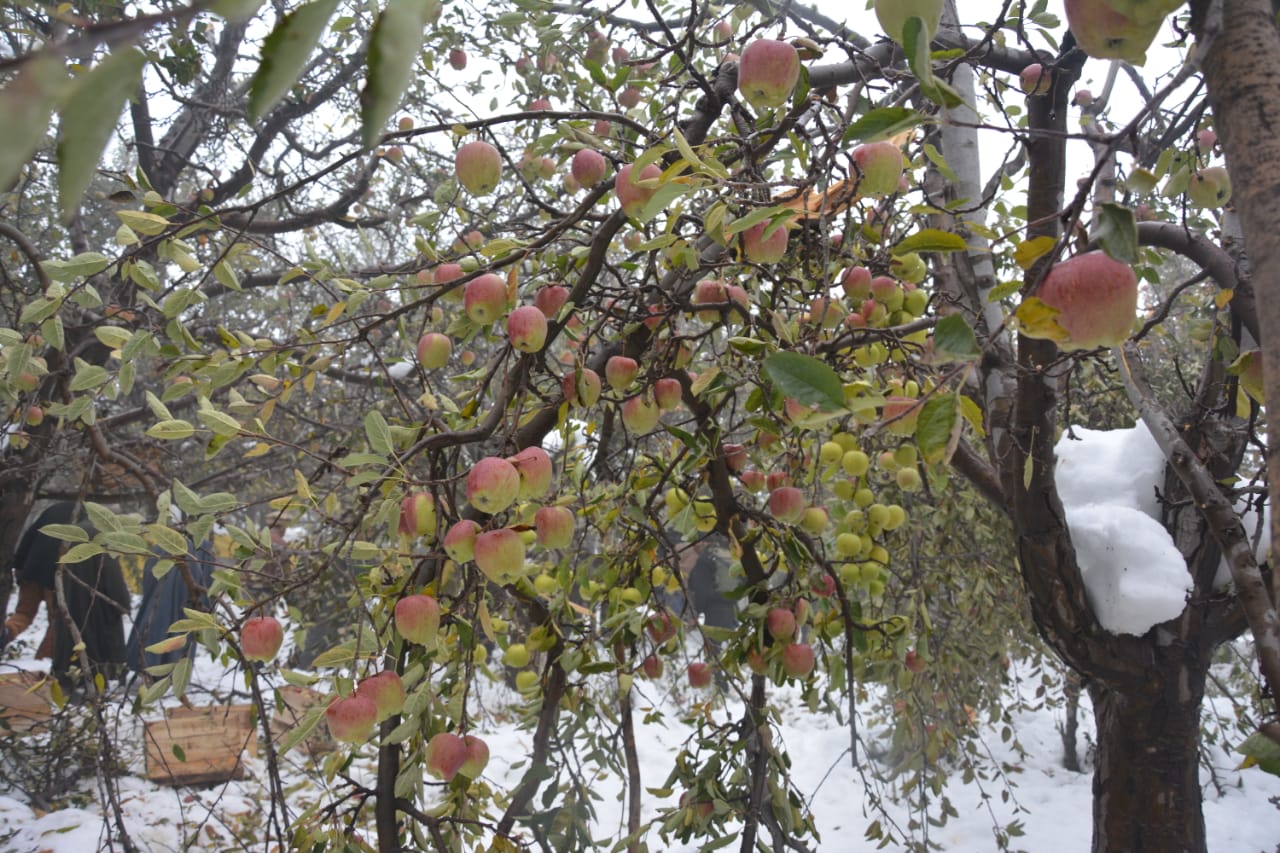 “I will just pay the interest on the KCC [Kisan Credit Card] loan that I took from the J&K Bank. Hopefully, next year I will close it” said Mohammad Sultan from Shopian district.

Earlier the government had introduced a Market Intervention Scheme, roping in NAFED. Even after a good response earlier in the season, the government for unknown reasons closed it down as the season neared its end. Farmers’ produce is still stranded in different mandis in the valley.

At the time of writing, south Kashmir had received yet another spell of snowfall on December 20, and the highway was closed again. Hundreds of fruit laden trucks which were stopped earlier to allow one-way traffic to pass were again left stranded. In Sopore traders and farmers protested against the administration for not allowing their trucks to ply.

For now farmers are just worried about the rates - and the chillai-kalan, a forty day period of intense weather - and whether it will allow the road to be open. 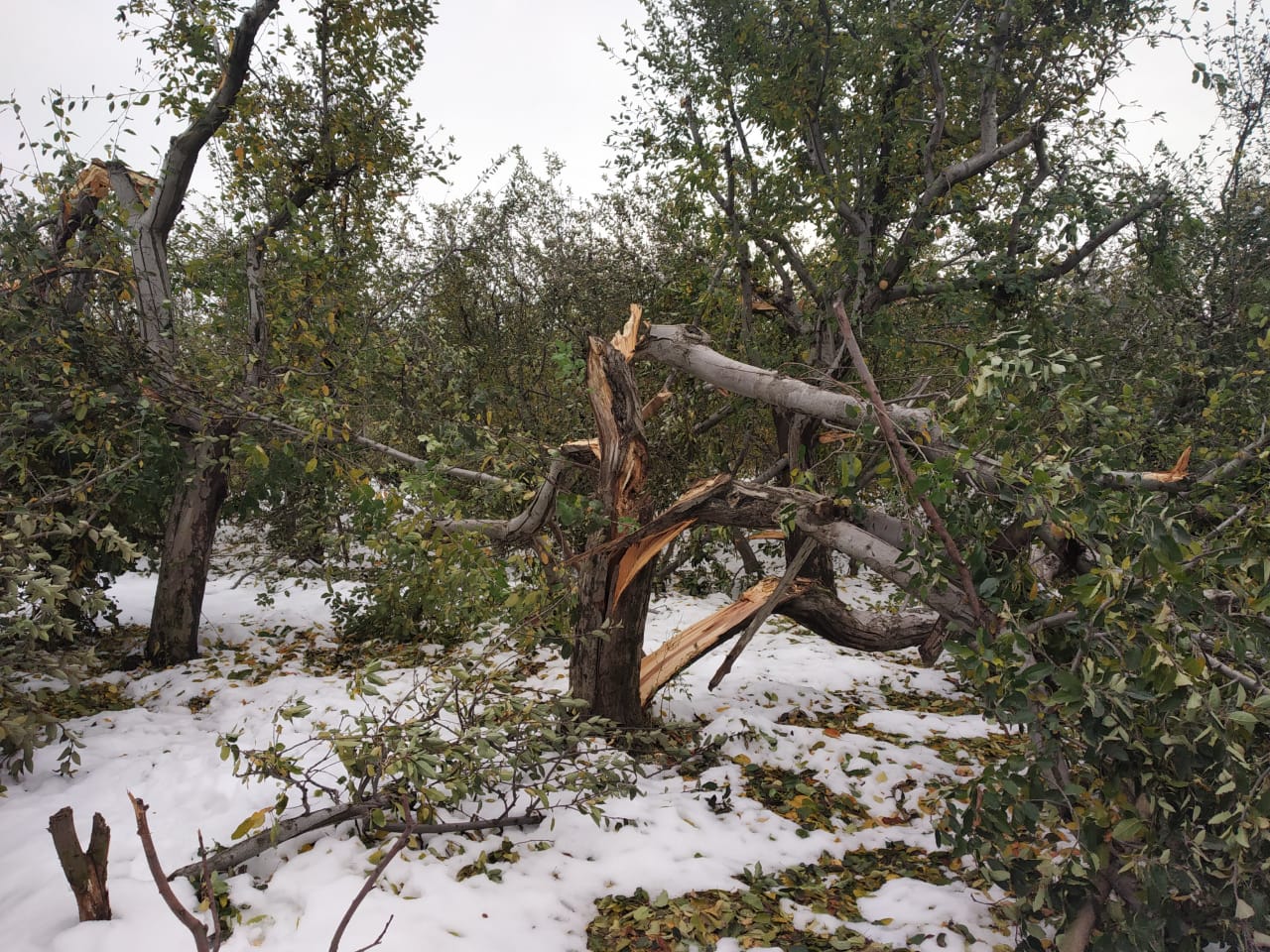 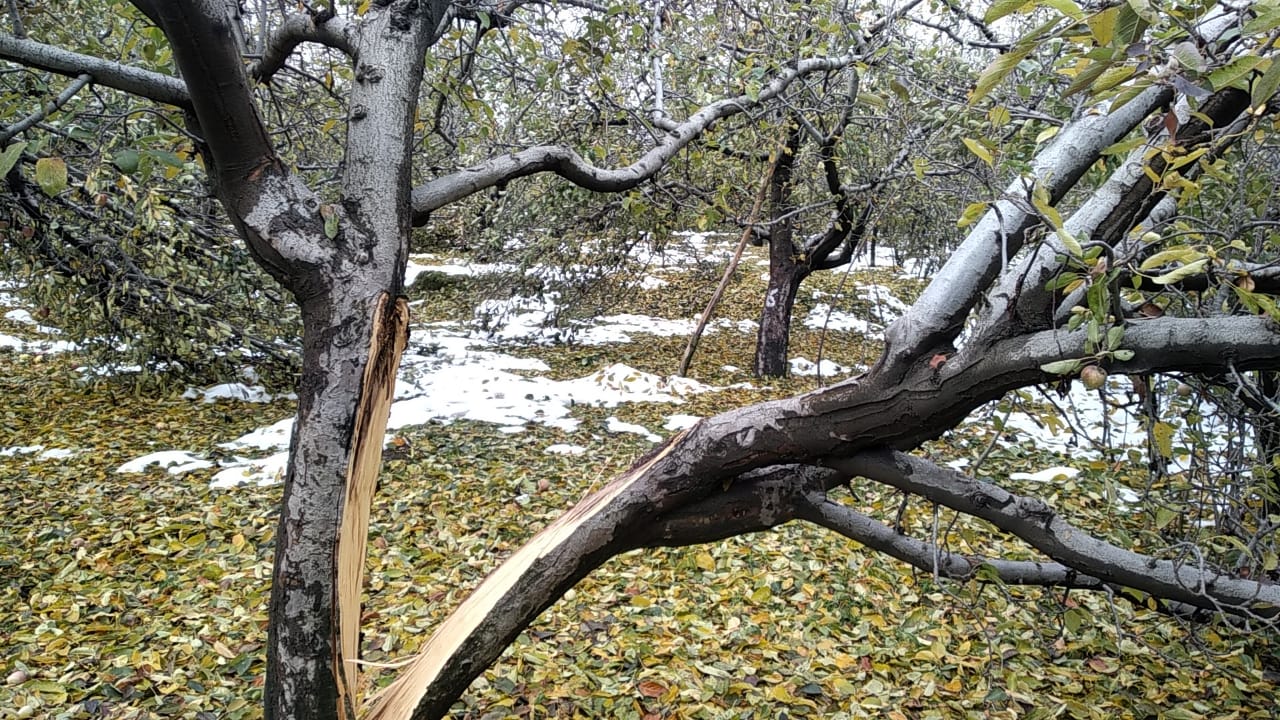