KOLKATA: On April 24 this year, three houses were demolished after evicting the residents at the Macheng village near Langol reserved forest area in Manipur during nationwide lockdown. According to the forest department, the evicted people had encroached upon reserved forest and illegally constructed three houses at Compartment Number V, Khabam Block at the Langol Reserved Forest.

A press release issued by the Principal Chief Conservator of Forests and HoFF, Kereilhouvi Angami, a regular patrolling team of Central Forest Division had detected the unauthorized constructions and stopped the constructions.

The statement further said, “However, taking the advantage of the lockdown due to Covid-19 epidemic and while the frontline staffs were fully engaged in controlling and fighting forest fires at different places, the encroacher started the constructions.”

Speaking to the media, Divisional Forest Officer, Central Division, R K Amarjit Singh, said that the villagers had been given prior information six months ago to stop constructing new houses but they did not cooperate.

Initially residents of the Macheng and adjourning area had blocked the road and upon seeing forest officials they started shouting their objections to the move to dismantle the structures as well as insisting them to take their lives as well. The argument went on for hours and the crowd was finally dispersed after police fired tear gas shells and rubber bullets at them. Local sources claim few police personnel got injured during clash with agitators.

However, Mani Gangmei, village head of Macheng, questioned the behaviour of the forest officials and said that the authorities showed no empathy for the underprivileged amid the lockdown. He had also appealed to the state government to provide alternate accommodation for the evicted members considering the pandemic situation in the state. 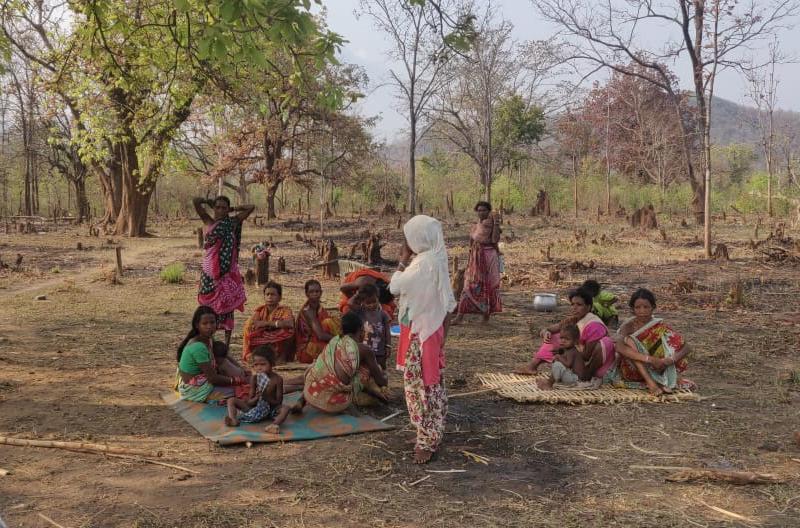 On the same day the Odisha Forest Department carried out demolitions amidst lockdown, leaving nearly 90 people shelter-less of 32 tribal families in Kalahandi district. Sundhar Manjhi, who lives in in the Sagada Gram Panchayat, told Gaon Connection: “When the forest department officials had come to demolish the houses, we were visiting a village close by as someone had passed away. When we returned in the evening, we didn’t have homes.”

He added: “We don’t know what happened to our chickens and goats; they just disappeared. We don’t have anything to eat. We are living under mahua trees with our young children. If it rains, we have no place to go to.”

Highlighting the plight of the hapless tribals environmental activist and Goldman Environmental Prize winner Praffula Samantara, who heads the Lokshakti Abhiyan, an organization that has long been fighting for the rights of tribals in Odisha, wrote an open letter to Chief Secretary of Odisha on Facebook after the eviction happened.

Samantara said, “These tribals had been living here for the past six months. They all lived in a village in Makhaguda, which is located on a mountain about 15 kms away from here. Due to the landslides in 2017, their houses were damaged and so they settled here. Nobody could have removed them from here under the Forest Rights Act. Nevertheless, on April 24 afternoon, a large number of forest department officials arrived and demolished their thatched houses made of mud.” 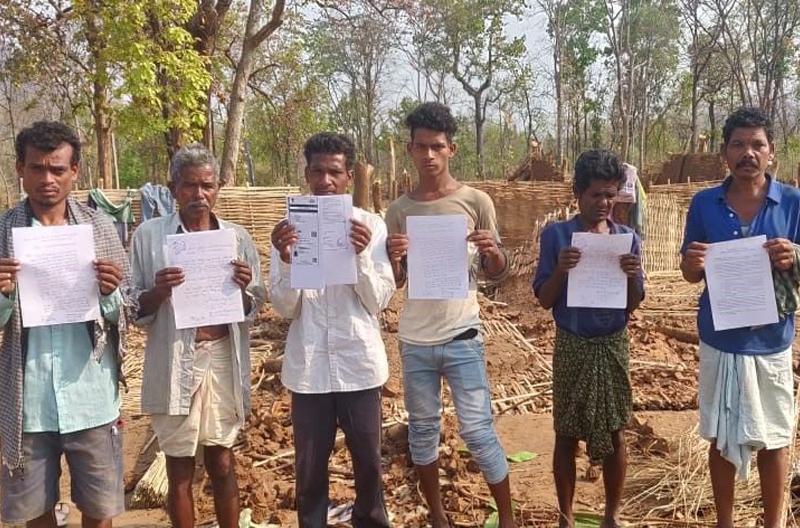 These homeless families have no shelter to protect them from the scorching summer and no place to go amid the nationwide lockdown.

Housing and Land Rights Network (HLRN) has documented at least 22 incidents of forced eviction and home demolitions, across India, by both central and state government authorities between March 16, 2020 and June 16, 2020. These incidents have affected over 13,500 persons (conservative estimate calculated by HLRN) and resulted in the violation of multiple human rights. The reasons for these evictions include ‘beautification’ projects, government land clearance, and ‘smart city’ projects.

Activists opine none of these evictions can be justified during this severe global pandemic and the resulting public health and economic crisis in the country. In most cases, due process, including provision of advance notice and alternative housing, was not followed, in violation of international human rights standards, including the United Nations (UN) Basic Principles and Guidelines on Development-based Evictions and Displacement.

The vast majority of evicted persons have been rendered homeless, exposed to the heat and rain, and face the heightened risk of contracting COVID-19.

The UN Committee on Economic, Social and Cultural Rights also called on State parties to impose a moratorium on evictions during the pandemic. Several Indian courts, including the Bombay High Court and the Allahabad High Court, directed state authorities not to evict people or demolish homes during the lockdown. 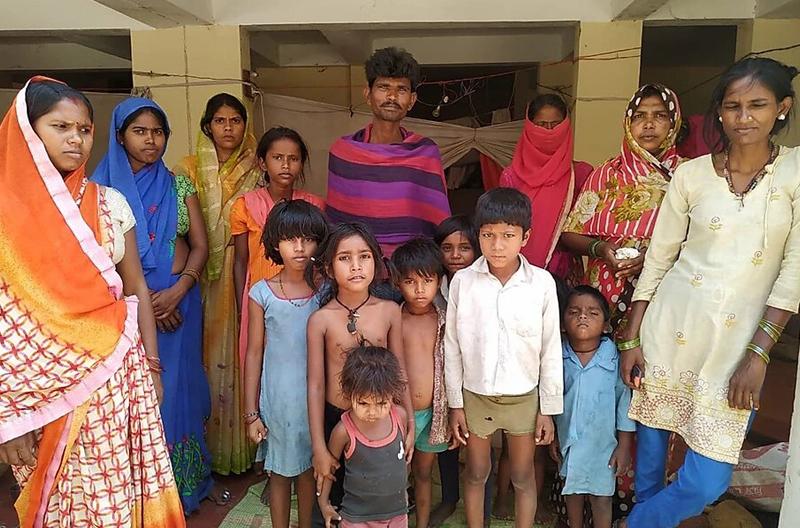 After demolishing their homes on 9 May, the Rewa municipal corporation put up the people in parking lots where they live with no rooms or physical distancing. (Courtesy: Article 14)

Despite these orders and advisories, at least 22 incidents of forced eviction across India during the national lockdown made 13,500 people homeless. It is likely that many of these evictions were carried out during the lockdown to take advantage of the curfew-like conditions, when movement of affected persons was restricted and they did not have access to legal remedies.

-For instance, in Siddipet, Telangana, authorities demolished 30 homes of Dalit farmers in the middle of the night, without prior notice.

-In Rewa, Madhya Pradesh, local authorities demolished 20 houses for the ‘beautification’ of a pond, rendering daily-wage labourers homeless during the lockdown.

- In June, forest officials in Siwal, Madhya Pradesh set fire to the house of a tribal family and threatened to destroy more homes, reportedly, to prevent villagers from cultivating land.

-In Bilaspur, Chhattisgarh, the state administration evicted about 400 families living in government housing to accommodate those evicted from 160 houses for the ‘beautification’ of the Arpa River. Despite the rise in COVID-19 cases, families have been forced to live out on the streets without food and water.

-Most recently, in Shakur Basti, Delhi, officials of the Indian Railways forced 13 families to demolish their own houses after threatening to evict them.

According to the United Nations, forced evictions are a gross violation of human rights. During a pandemic, to evict people when they are required to ‘stay at home,’ is particularly inhumane and amplifies their already high vulnerability to contracting the virus. 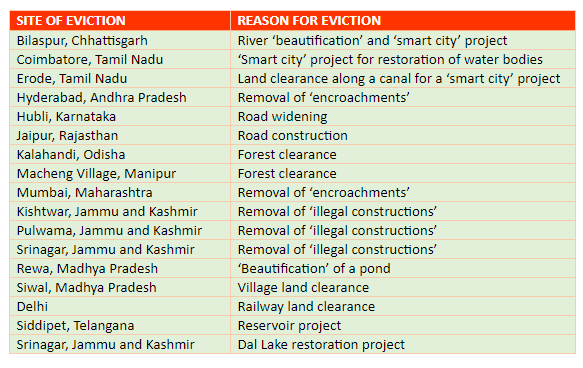 Since March HLRN had called on the Government of India to impose a national moratorium on forced evictions till December 31 this year and ensure that no one in the country is rendered homeless.

“We had also called for measures to improve living conditions of those who are homeless and inadequately housed. The Ministry took heed of HLRN’s letter by forwarding it to all state governments and asking them to frame policies to protect those without adequate housing. Despite this, both state and central government authorities, such as the Indian Railways, have committed grave violations of human rights by demolishing homes of the urban and rural poor at the height of the pandemic, thereby threatening their lives and worsening the risk of exposure and spread of the coronavirus,” HLRN said in a press release. It also demanded proper investigation and compensation for loss of housing and personal belongings for each eviction case.