“Whenever I buy any product with palm oil content, even if its an ice cream, I ask myself whether its the result of a sustainable means of production or the decimation of rainforests,” says Arundhati Ghosh, an independent horticulturist.

Ghosh lived half her life in Australia, where there is extensive documentation of orangutan extinction in Malaysia and Indonesia due to the cultivation of palm oil, most of it exported to India, China and Pakistan.

The world’s largest consumer of vegetable oils, the Indian public remains unaware of the dangers of massive palm oil plantations, especially in thickly forested regions. The threat to biodiversity is emphasised by experts in the northeastern region, which accounts for 25% of the country’s forest cover.

In the last week of July, Prime Minister Narendra Modi urged farmers across the eight northeastern states to set up palm oil missions to reduce India’s dependence on imported edible oils, in line with the Centre’s Atmanirbhar Bharat or Self-Reliant India campaign.

The Oil Palm Developers and Processors Association welcomed the suggestion, saying in a press release on August 9, “The oil palm area in the country is very negligible today, compared to the potential the crop has. We have seen the transformation this crop has brought about in the lives of the farmer community in Andhra Pradesh. This can be replicated in the North-East.”

Jayaditya Purkayastha, a herpetologist at Help Earth, told The Citizen that “Northeast India is part of the Indo-Burma biodiversity hotspot, a sensitive area for flora and fauna. Monotypic cultivation of oil palm will have a direct impact on species endemic to the region. Obviously we cannot convert paddy fields into palm oil fields: they will be looking for additional areas, targeting forested areas.”

But “If you talk about such standards, do you think they follow the EIA norms diligently?,” asked Dr Narayan Sharma, a wildlife conservationist from Assam, referring to the Environmental Impact Assessment norms recently diluted by the central government.

State-backed palm plantations can have a serious impact on human and ecological health, and the economy. In Assam the fear of groundwater depletion and unmitigated conversion of reserved forests for agricultural activities is a persistent danger.

In the district of Goalpara, infamous for its detention centre holding those excluded by the government’s National Register of Citizens, and Kamrup, around 560 hectares of land were allocated in the foothill areas, fallow land and wasteland during 2015-16 under the National Mission of Oil Seeds and Oil Palm, according to state government data.

“The problem comes with the lack of clarity on the definition of wastelands. Grasslands are not wastelands. As long as oil palm is cultivated in non-grasslands, non-forests and non-habitat places, it is fine,” stressed Sharma, who also teaches at the National Institute of Advanced Studies in Bengaluru.

“Palm oil plantations should be planned on lands which have enough groundwater. Local people should not suffer because of depletion of the groundwater table,” he added.

The government of Assam has reportedly signed an agreement with Shivasis Oil Palm Private Limited to help farmers in the state get the necessary agricultural equipment and market associations. 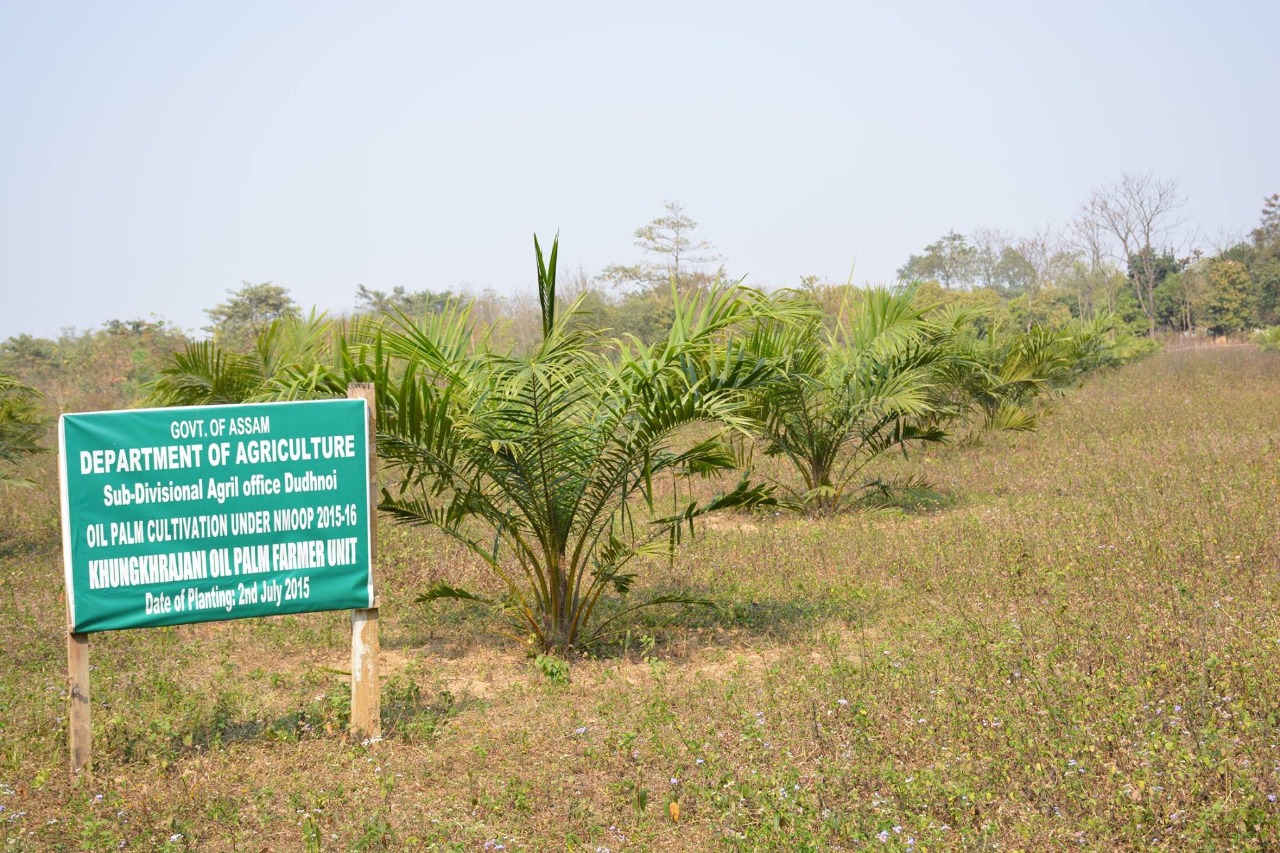 
In Nagaland, a major problem is the lack of palm seeds and saplings. Local people fear that these groundwater-guzzling plantations could affect water tables which may not be replenished quickly.

According to Dr Animesh Sarkar, assistant professor at the School of Agricultural Sciences and Rural Development in Nagaland University, potential areas for oil palm plantations have been identified in the districts of Dimapur, Peren, Mokokchung, Wokha, Mon and Longleng.

For a 1 hectare (2.5 acre) plantation of oil palm, there is a general requirement of 143 seedlings. “We can collect the seedlings from the southern states of India instead of importing it. The issue with oil palm cultivation here is that there is no processing unit yet. Another issue is the need of high water content for its growth,” said Sarkar.

Tripura and Nagaland palm growers complain about the lack of processing plants. They say the oil extracted from fruits should be processed within 24 hours.

A ‘Brief Note on Oil Palm’ prepared by the National Food Security Mission (Union agriculture ministry) shows that 530 hectares of land had been converted in Tripura up to March 2018. But according to Dr Mrinal Kanti Choudhury, assistant director at the RCDF Complex Research Station in Agartala, palm oil has a longer history in the state:

“In 1985-86, 84 hectares of land was allocated in a government orchard at Baspadua for palm cultivation. Some plants even entered the fruition phase, but there was no subsequent oil extraction and processing thereafter. We couldn’t develop the facility here.”

In Arunachal Pradesh and Mizoram, big businesses such as Ruchi Soya [acquired by Patanjali Ayurved last year] and Godrej Agrovet have entered the fray, luring farmers with small landholds who may be adversely affected by the long gestation periods and replantation challenges of oil palm.

An expert on forest genetics from Itanagar who didn’t want to be named said, “Marginal farmers are brainwashed by the government with the lure of decent revenue. The farmers will have to wait for at least 4-5 years till the crop bears fruit. Moreover, the replantation of palm trees takes place 30-40 years down the line.”

Eminent biologist Umesh Srinivasan’s report on 'Oil Palm Expansion: Ecological Threat to Northeast India’ cites the threat to critically endangered species in Arunachal Pradesh such as the Bugun Liocichla (a bird species made known to science only in 2005) posed by the conversion of community managed forests to oil palm fields. The jhum landscapes here are known to hold significant biodiversity.

In 2011 the Mizoram government implemented the National Land Use Policy to legitimise individual land titles, a step towards settled farming through oil palm plantations.

A botanist from Mizoram shared his assessment of oil palm plantations in the Kolasib district in the state, saying that unlike jhum cultivation where men and women were equal partners, oil palm has increasingly become a man’s business.

“From the collected data, 55% of farmers have an annual income of more than 90,000 from Oil Palm Plantation. Failure to achieved the expected annual income is mainly due to improper link road to their oil palm field, and late plantation wherein its gestation has been just been completed,” he stated.

In Sikkim meanwhile, state-promoted oil palm plantations would threaten the sustainable and profitable organic farming practices which are widely followed. Asked whether there is any such plan in the offing, Dr P.P Dabral, dean of the College of Agricultural Engineering and PHT, Ranipool, Gangtok said:

“Palm crops are usually cultivated in warmer areas. It cannot be grown here. Take the example of pineapple which is cultivated in West Bengal. If it were to be replicated in Sikkim, there would be a markup in the price of a pineapple. Let’s say if Rs 20 was the original price, transportation costs worth Rs 60-Rs 80 would make it unaffordable.”

The challenge of supply chains and logistics is also acute in Meghalaya where the farmers have to fend for themselves. The National Food Security Mission’s 2018 Brief Note identifies at least 50,000 hectares of “potential land” in Meghalaya for palm oil cultivation.

A horticulturist from Meghalaya who now lives in Himachal Pradesh said, “Meghalaya has a mix of subtropical and temperate climates, which is well suited to any type of crop cultivation. However, there is a lack of cooperative societies engaging farmers to ease the shipment of their produce. Farmers have to take their produce individually to the shops and sell. In Himachal Pradesh, the farmers stack their produce on the roadside, which are carted off to the sabji mandi areas in Delhi without any hassle. The money is directly transferred to their accounts.”

The palm oil missions have faced some resistance from the local people. Following closely on the heels of the Mizoram template, the National Land Use Policy was implemented in Manipur in 2014, paving the way for palm oil missions. Among other communities the Kukis opposed it, apprehending a loss of traditional agriculture and arguing that palm oil cultivation is an unsustainable practice.

Narayan Sharma agrees. “In the long run, jhum cultivation is sustainable for the locals who can draw medicines, bamboo and other bounties from forests. Additionally, the fallows have enough time for regeneration into forests. Once the land is converted to oil palm, it is lost forever.”

Plantations also introduce a different land ownership pattern, according to a scientist from the Indian Council of Agricultural Research in Imphal.

“In the hills in the Northeast, the land used for shifting cultivation either belongs to the chieftain or community, hindering permanent plantation. In other states like Himachal Pradesh and Kashmir, the hills have an individual ownership. Therefore, there are well-maintained orchards growing apples, oranges and other crops earning a hefty return.”

He said that it is the lesser irrigated areas, mainly rain-fed, such as Suangphuh, Tamenglong and Jiribam that have been earmarked for palm cultivation in Manipur.

Still the question of people’s health and unnatural destruction looms large. Palm oil has been the largest driver of deforestation practices in Indonesia and Malaysia, destroying the habitats of endangered elephants, rhinos, tigers and orangutans, and famously lighting up the Asia-Pacific skies in a pall of forest fire and smoke last year.

“Northeast India is a treasure trove of biodiversity—a myriad species of flora and fauna remain to be tapped. Palm oil might be an easy source of income for farmers but without sustainable means of production in place, we will end up like Indonesia and Malaysia,” said Arundhati Ghosh.

An orangutan tries to fight off loggers in West Borneo, 2013


Cover: From the fires in Indonesia last winter