Havoc in the upper Himalayas

On February 7, 2021, a large part of the Nanda Devi Glacier in the Chamoli district of Uttarakhand triggered an avalanche and flash floods in the Alaknanda and Dhauli Ganga river streams near Joshimath. The rapid flow of water caused landslides which fell into deep ravines, destroying all the houses and structures that came in the way of these sliding mountains.

With this incident, Rishi Ganga hydropower project was completely destroyed and NTPC’s Tapovan-Vishnugad hydel project has also been severely damaged. The collapse of three dams near Raini village has completely cut off communication with several border posts. A high alert has been issued in several districts, including Pauri, Rudraprayag, Tehri, Haridwar, and Dehradun, for fear of being affected by the calamity due to rising water levels in Alaknanda, Dhauli Ganga, and Rishi Ganga rivers, as a result of the glacier burst.

The incident has wreaked havoc in the upper Himalayas. The death toll from the calamity has risen to more than two dozen, while nearly workers are reportedly still missing. A large number of workers were trapped in the water which filled the tunnels constructed in the dam projects. The 250-metre-long tunnel at Tapovan is blocked by debris, mud and silt, making rescue operations difficult. Only 80 metres of the tunnel has reportedly been cleared so far.

The incident in Uttarakhand refreshed the traumatic memories of the June 16, 2013 tragedy. The state of Uttarakhand is naturally very beautiful as it has invaluable resources like dense forests, innumerable rivers, and high mountains. At the same time, it is worth mentioning here that it has a very fragile ecosystem. Hence, the state is prone to natural disasters.

The district of Uttarkashi was hit by a magnitude 6.8 earthquake in 1991 which killed hundreds of people and destroyed thousands of houses. It was followed by another earthquake in 1999 in Chamoli in which hundreds of people were killed. The entire Malpa village of Pithoragarh was devastated by a landslide in 1999 and about 250 people were killed in the incident. A cloudburst in June 2013 killed thousands of people and left millions stranded in flood water for days.

Earthquakes, cloudbursts, landslides, and massive avalanches as well as other natural disasters are part of natural processes, but the rise in their frequency and depth of intensity is increased due to human activities.

The natives of Uttarakhand are well aware of the fragility and eco-sensitivity of the state's environment and have been trying to save it for a long time. Mira Behn, an environmental activist of Garhwal, published an article in The Hindustan Times on 5 June, 1950 titled ‘Something wrong in the Himalaya’, documenting that the flash floods in Uttarakhand are bound to wreak havoc as the sensitivity of the environment is being overlooked for the economic development process. Later, she also wrote to then Prime Minister Rajiv Gandhi about the same.

It is also pertinent to note that where the incident has taken place, is the cradle of the Chipko Movement initiated in the 1970 to save trees. Alas! The governments of the time neither listened to the cries of the locals and the environmental activists nor learnt a lesson from the tragedy of 2013. There are still more than 50 hydroelectric projects underway on the Alaknanda and Bhagirathi river system, even though a committee of experts had warned that hydroelectric projects could pose a threat to the state.

Regarding the incident, Uma Bharti, a senior BJP leader and former Water Resources Minister—during her incumbency—had highlighted that the Himalayas are a very sensitive area due to which power projects should not be built on the Ganga river and its major tributaries.

Following the catastrophe in Uttarakhand, the government needs to seriously reconsider its stance on building hydroelectric dams in the region. The government should no longer ignore the advice and warnings of experts.

The Himalayan glaciers are also melting rapidly due to the rising temperature. According to a report by the International Centre for Integrated Mountain Development, the rate of glacier melting doubled between 1980 and 2005. If the Government of India cuts greenhouse gas emissions in accordance with the Paris Climate Agreement, one-third of the glaciers in the Himalayan and Hindu Kush mountain ranges will melt by the end of the 21st century. It will be too late by then. Urgent action needs to be taken sooner. This study shows that natural disasters are likely to increase with rise in temperature.

Magsaysay award winner Chandi Prasad Bhatt said that he had written a letter to the then Environment minister in 2010, warning about the adverse effects of this project, which has now been destroyed in the 2021 incident. He also said that if his advice had been followed in 2010, there would not have been such a huge loss of life and property.

The central and state governments have been pursuing pro-corporate development by ignoring environmental norms. The state of Uttarakhand, once famous for its natural beauty, now appears to be at the verge of catastrophes even greater than the 2013 tragedy, by flouting the Environment Impact Assessment laws to build the 889-kilometer long stretch of Char-Dham road, which passes through an environmentally-sensitive area.

The construction of this stretch of almost 900-kilometers has been started by dividing it into 53 smaller sections of less than 100 kilometres each, which was reportedly done to avoid an Environmental Impact Assessment. Such an assessment is required for projects in ecologically-sensitive areas of over 100 kilometres. The width of this road is being kept at 12 metres for which land with width upto 24 metres would be required. It is important to note that in European countries, the width of the road in the mountains is kept to only 8 metres.

In the aftermath of the February 7 catastrophe, Prime Minister Narendra Modi said that the country stands by Uttarakhand. He has also announced financial assistance to the victims’ families. This announcement will not benefit the environment or the people of Uttarakhand as the government’s negligence in environmental regulations has led to an immense loss of life and property, both in 2013 and 2021.

In the February 7 tragedy, from the 250-metre-long tunnel in the environmentally sensitive area, only an 80 metres stretch has been cleared. Workers trapped in the remaining 170 metres stretch of the tunnel are feared to have lost their lives due to suffocation, all while earning their livelihood. Would this count as development or the destruction of the environment and people?

The huge loss of life and property as a result of natural disasters gives a warning signal to the central government to strictly abide by the environmental norms. The Central Government is reportedly planning to relax environmental norms for Mopa Airport (Goa), iron-ore mining (Goa), sand mining (Uttar Pradesh), Sterlite Copper, Thoothukudi (Tamil Nadu) and construction activities in and around Delhi, which have been blocked by the Supreme Court and the National Green Tribunal.

NITI AAYOG—the government’s apex think tank—has meanwhile commissioned a study that seeks to examine the “Unintended Economic Consequences” of judicial decisions that have hindered and stalled big projects on environmental pretexts. If mountainous areas of the country, including Uttarakhand, and their people are to be saved, then it is incumbent on the central government not to carry out development work in these areas without seeking the opinion of geologists and local stakeholders.

The government should immediately ban unsustainable development projects in the hilly areas, be it the Char-Dham road or proposed hydropower projects. If this does not happen, the people of these areas will be forced to endure disasters like sliding mountains and glacial bursts in the future. The interests of people living in the hilly areas and country at large demand that the central government should adopt a pro-people and pro-nature development model instead of a pro-corporate economic development model.

Gurinder Kaur is a professor at the Department of Geography, Punjabi University, Patiala. 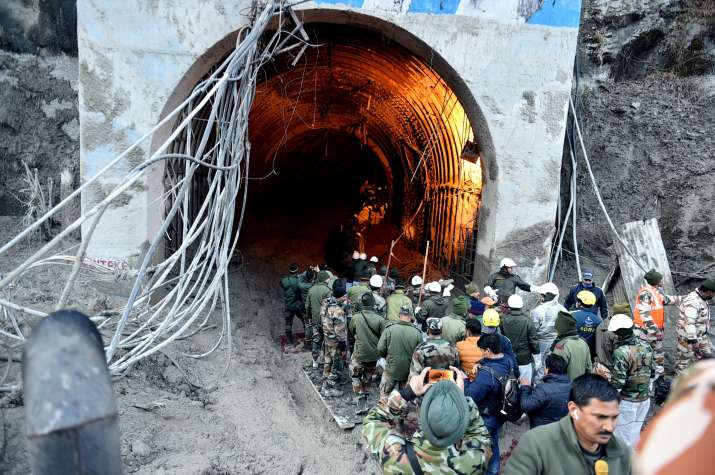