On February 15 a three-judge ‘green bench’ headed by the chief justice, Sharad Bobde allowed the government of Himachal Pradesh to clear 614 hectares of forests and move ahead with 138 existing infrastructure projects. It approved an additional 289 projects exploiting another 122 hectares of forest land, subject to certain conditions.

The chief minister, Jai Ram Thakur welcomed the decision saying that development work in the state would be accelerated now. All of these projects stood suspended since 11 March 2019, barred by the Supreme Court under the Forest Conservation Act 1980 and the Forest Rights Act of 2006 (FCA, FRA).

Thakur said he had discussed this issue with prime minister, Narendra Modi and union home minister Amit Shah, and that his government had also filed five petitions in the Supreme Court, one in 2019 and four last year asking that these projects be commissioned.

The chief minister said that the 138 projects under the FCA include 20 hydropower plants, 88 roads, 3 bus stands, 2 degree colleges, the Manali ropeway, a helipad, an IIT, a cowshed, a Shiv Dham temple, a school. The 465 projects cleared of FRA restrictions include 334 roads, 53 schools, 20 community centres, 10 dispensaries, 7 anganwadis and so on. The bench also approved the ₹1337 crore Green Corridor National Highway Sirmaur and a two-lane national highway in Dharamshala.

Like Uttarakhand, Himachal Pradesh is mountainous, earthquake prone, rich in forests and covered with snow. It is important to seek the opinion of geologists, ecologists and local residents before permitting construction there. Failing which, Himachal Pradesh may have to bear the brunt of avoidable tragedies like Kedarnath (2013) and Chamoli (2021) in Uttarakhand.

Construction in mountainous areas requires cutting down forests and damaging mountains and hills. Denuded of forests, rain erodes the fertile topsoil cover, while cutting up mountains or hills disturbs their balance and stability increasing the probability of landslides, resulting in the huge loss of property and lives.

The projects that have been cleared fall in the jurisdiction of FCA 1980 or FRA 2006. If reserved forests or ecosensitive zones are used for hydropower dams and multi-lane roads then this area of the state could be devastated like Uttarakhand.

Constructing a kilometre of road in hilly areas extracts at least 30,000 to 40,000 cubic metres of soil and stones. During the construction of roads and dams, mountains are usually blown up with explosives causing cracks in their side. As a result they slidedown during the monsoon season or during heavy snowfall in winters. This leads to heavy loss of life and property.

In the Himalayan region, on average one person is killed every year by landslides in every 100 square kilometre area. In 2014 alone landslides killed 500 people in the country. The recent glacier burst in Uttarakhand killed 58 people and left 150 missing unaccounted for in the tunnel.

Just on February 16, a landslide near Garola on the Kharamukh-Holi road in the Chamba district of Himachal Pradesh closed traffic for several hours. Road widening work was underway at the site and part of the mountain had been blown up with explosives a day earlier.

In 2013 about 4,200 villages in Uttarakhand were affected by landslides and countless people were buried under the mountains. Many landslides including those in Malin (2014) in Maharashtra, Kedarnath (2013) and Chamoli (2021) in Uttarakhand have been caused by the construction of dams in ecologically sensitive areas.

Himachal Pradesh also falls in a seismically sensitive zone. The Indian and Arabian tectonic plates are constantly pushing India into the Eurasian plate, which is likely to cause major earthquakes from Jammu and Kashmir in the northwest to Mizoram in the northeastern region of the country.

Geologists are well aware of this, and had expressed concern after the 2015 earthquake in Nepal, stating that a major earthquake could strike the Himalayan region at any time. Very recently, on the night of February 12 the jolts of an earthquake were felt in Himachal Pradesh and in the afternoon of February 14. It is pertinent to remember that the Nepal earthquake in 2015 also killed 30 people in Bihar and Uttar Pradesh, although its epicentre was 300 to 400 kilometres outside the Indian border.

The Himalayan mountains are also called the third pole of the world as they contain a huge amount of glacial ice. Himalayan glaciers are melting at a rapid rate due to the rise in the earth’s average temperature caused by industrial activity. The rapid melting of glaciers creates glacial lakes, which when they burst can lead to tragedy as recently seen in Chamoli.

The chief minister of Himachal Pradesh said his government would take up the issue of the Chamoli incident while implementing a plan for hydropower projects in the state.

Besides water shortages from melting glaciers that feed many of our rivers, the indiscriminate cutting of forests could also lead to severe water shortages in the state in the near future. The roots of trees absorb excess rain and snow melt and later on gradually release it flowing into rivers, springs and waterfalls.

The projects cleared by the highest court even include protected forest areas which fall under FRA 2006. This law covers indigenous Adivasis and other forest residents who depend on forests for their basic needs and development rights. Using their land for construction would mean the complete displacement of these people.

Even when they appeal for a lawful hearing in such situations, it often goes unheard. In this regard, based on his research Dr Sujeet of the Jawaharlal Nehru University, New Delhi has shown that Himachalis made 2,223 appeals under the Act in 2018 of which the state settled only 136. In this way, by using forestland protected by FCA or FRA for construction works, we are harming the regional ecology and trampling on the rights of indigenous people.

Sometimes, such as schools, colleges and universities are built on forestland and it emerges later on that these constructions were meant not for the public but for private corporations. One example is the Manav Bharti University in Solan which is reportedly involved in about 36,000 fake degrees scandals.

Our governments, assemblies and courts while exploiting forests for development purposes should keep in mind that economic development should be for the benefit of people, and people shouldn’t be sacrificed for development. It should be sustainable and protect the interests of ordinary working people and not the corporate sector.

Having obtained clearances from the court, the Himachal Pradesh government should now seek the opinion and advice of geologists, meteorologists, environmentalists and people who live in the affected areas before embarking on these projects, and develop them in such a way as to sustain the natural resources which belong to the people. 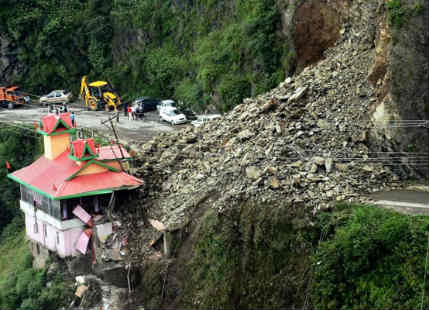