No protest is small

Events are taking place in the aftermath of cyclone Aila in the village of Samsernagar II in North 24 Parganas, West Bengal. The state government has acquired some 43 acres of land in this village in the Kalitatla panchayat to build concrete roads along the banks of the Kalindi river adjoining the Bangladesh border.

The planned road in this area is nearly 650 metres long, directly affecting around 140 Dalit families of whom 90 live below the poverty line. They are marginal landholders who say the government acquired this land without intimating them, and is denying them fair compensation for encroaching on their land.

The acquired land and property includes homes, trees, ponds, and farm and vegetable land owned by local residents who belong to Schedule Castes.

The road extension project is part of a flood management scheme being executed by the Irrigation & Waterways Department of the Government of West Bengal.

The key objection of these frontline communities is that on average 110–150 feet of land along the width of the present Kaccha Kalindi bank road will encroach upon their property.

Mainly Dalit Poundras, these landholders are a marginalised part of society who depend directly on the Sundarbans forest for their subsistence. Their yearly income is a maximum of 1 lakh rupees per household, earned from a sum of occupations including single season rice farming, crab collection, honey collection, daily wage labour and more.

These families live next to the boundary kaccha (unpaved) road which gets washed off every monsoon due to poor management of the embankment here. They say no sign was seen of embankment repair or road construction after cyclone Aila hit in 2009, until this month when a sudden jolt of road construction was begun in anticipation of the Bengal assembly election.

As a result, 140 families have been asked to desert their bastu land or native homestead, which includes a personal pond, trees, farm or vegetable land for self-consumption, and houses with a small courtyard, immediately and with unfair compensation.

According to local resident Niranjan Mondal, the shali lands (listed agricultural land) of the affected families were acquired from them without their knowledge in 2012. Of the 90 BPL households here, 46 got some compensation and 44 did not. The shali land so acquired was compensated at the rate of ₹1 lakh per acre, much less than the market rate then prevailing.

Most of the affected families hold 1 to 1½ bighas of land or a third to half an acre. They say the state assured them of the remaining compensation for household property or bastu land in due course of time. At present the market rate of dynamic land is around 4 lakh rupees per bigha or over 10 lakh an acre.

The revised Land Acquisition Act of 2013 requires the state to provide just and fair compensation to anyone whose land it takes away for constructing roads, buildings, factories. It brings transparency to the acquisition process and provides for generous compensation and rehabilitation to those affected by the takeover. In most cases the collector or a special land acquisition officer fixes the compensation rate as per the market value. 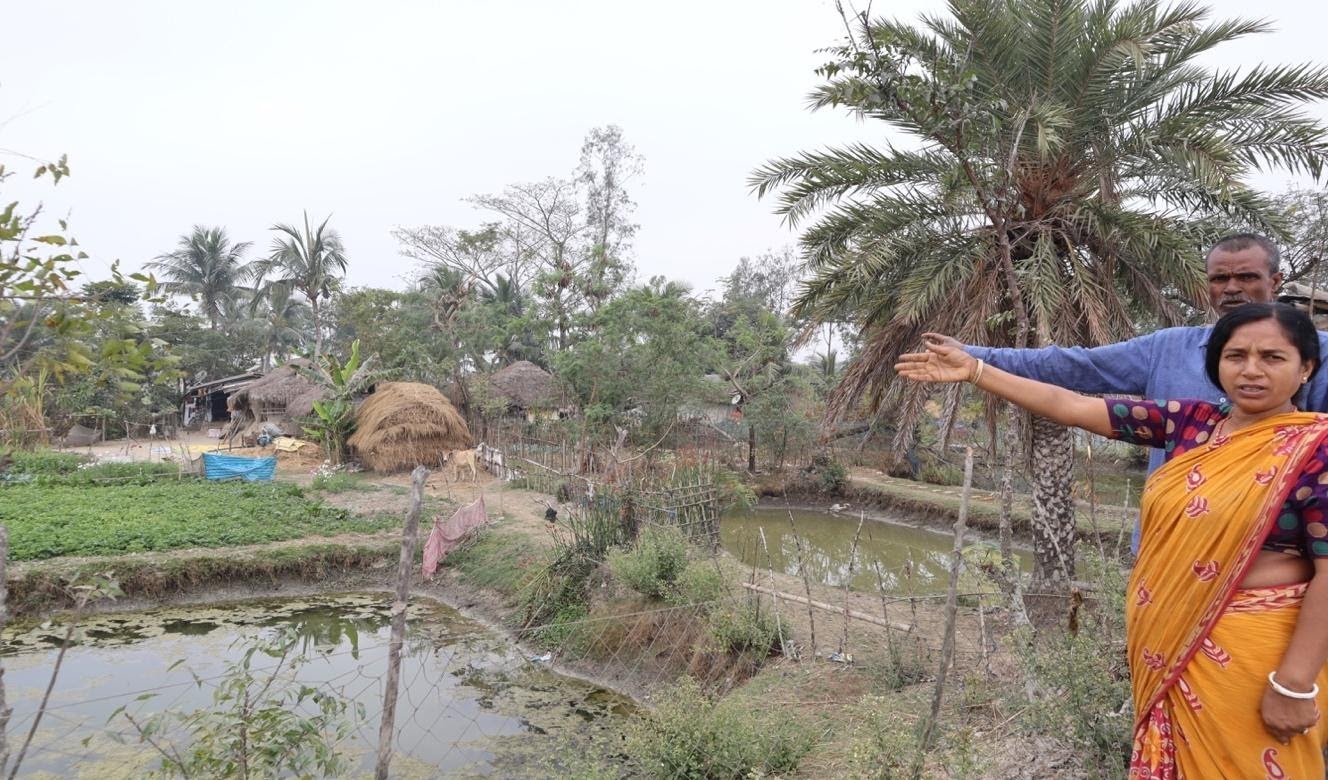 Tarapada Gayen, a crab collector in the Sundarbans forest, and his wife Romola Debi show their house, pond and courtyard which will soon be demolished

In the first week of February, officials of the irrigation and waterways department along with the contractor awarded the tender to construct the road abruptly stormed into the Kalindi Para construction site to begin work on the roadway without notifying residents. They were accompanied by the Kalitatla panchayat pradhan.

As witnessed by myself and recounted by other residents, the contractor came with JCB excavators and other demolition machines to demolish the homes and infrastructures of the affected families and start constructing the road.

These families and individuals are the most marginalised in Samsernagar, and have no social-political connections to resist the cruelties perpetrated in the last three weeks.

The village panchayat has been continuously misusing its position with the ruling political buttress, threatening the impoverished, undereducated men, women and children who are barricading the road construction, collectively protesting to gain their demand of proper compensation.

It hired local goons and muscle power to remove the survivors from the protest site. 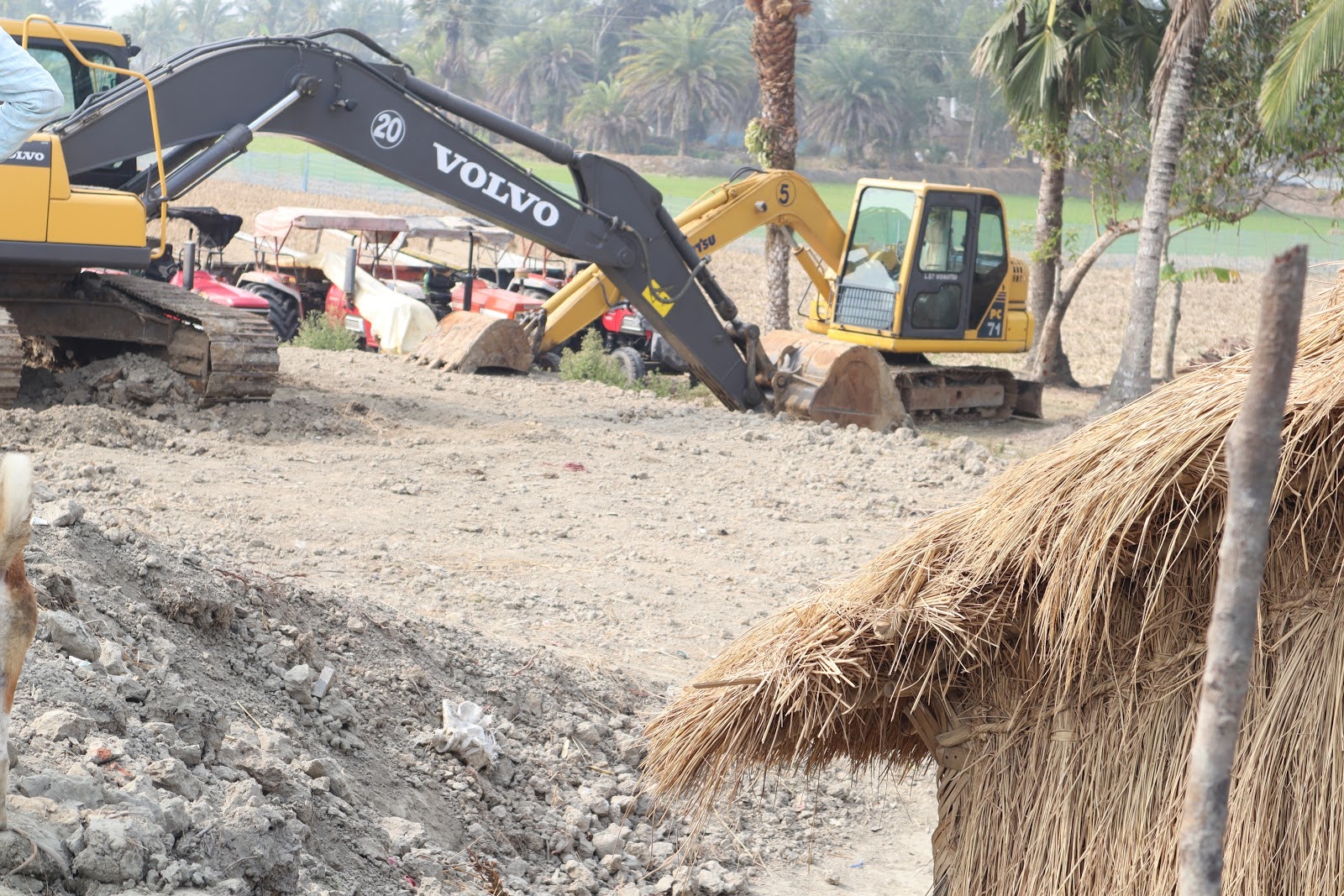 In the first week of February officials abruptly stormed the site

Reprehensibly, the compensation has come down to a mere 8,000 rupees for each affected family’s bastu land, which is worth 3–4 lakh rupees per family.

Several of the survivors recall how they had to rebuild their houses from scratch after Aila in 2009. It took them three or four years to put together the money and recover from all their losses, and now all of a sudden they have been asked to desert their homes, watching their roofs collapse again, this time not in a climate disaster but an institutional debacle, deprived of shelter, a basic human necessity.

Residents say these 8,000 rupees have been plotted by the contractor as a negotiable amount to stop the Dalit resistance and start the work sooner. They say this money is not enough even to buy a small pond, forget building a house. 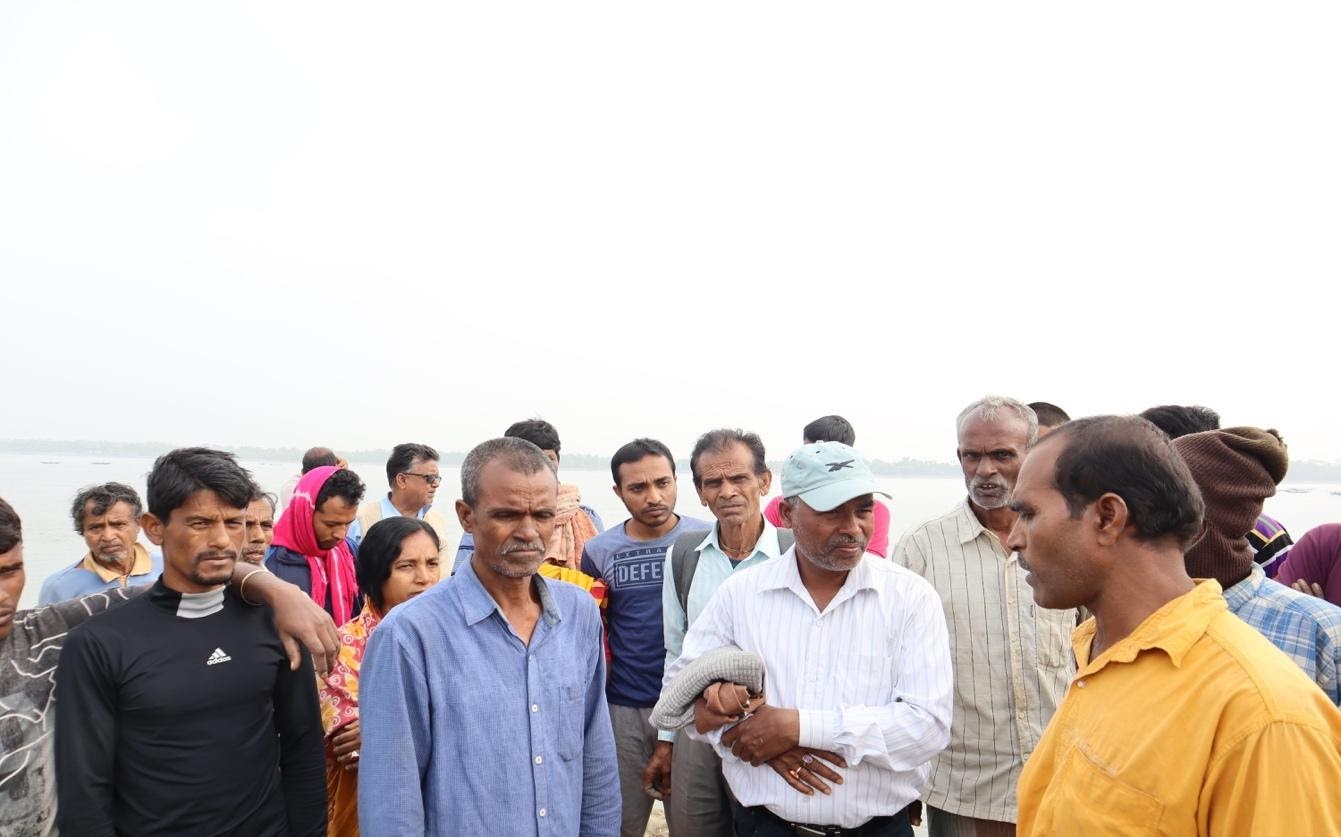 As February 18, the government had started demolishing the first few houses without considering the survivors’ plight and demands. Fundamental rights of these Dalit individials are being challenged, requiring an immediate halt to the process of construction and demolition.

The affected families say status quo must be maintained until further actions are taken by the state government.

They say they are not against the construction of a road; indeed they are in dire need of an elevated road embankment to safeguard from the continuous blows of erosion and embankment breakage leading to flash floods.

The main reason for their protest is to ensure they are recompensed fairly for their loss, so they can rehabilitate themselves and restart their lives again. They say a sum of 8,000 rupees is mere mockery.


Demolition of houses has begun

Camellia Biswas is a doctoral candidate in the humanities and social science at the IIT Gandhinagar
Photographs: Camellia Biswas
Video: Dhiman Biswas, local resident and protestor 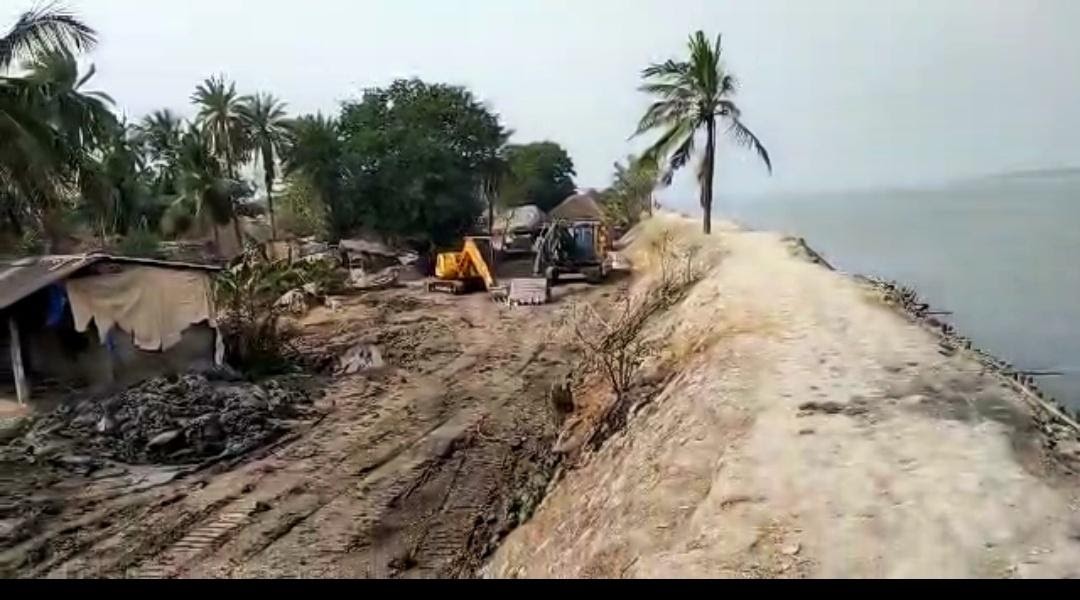