'Looking at the sky then, I could tell the air was finally able to breathe'

“Khela Hobe, Khela Hobe” – The game is on, let’s play – is the slogan that rents the air in West Bengal. Of the many who have submitted their nominations to contest the election, we found one who has raised his voice against deforestation and other agroindustrial activities damaging our health and environment.

He says he wants to enter the system and then question the system itself. No, he hasn’t got a ticket from any political party, neither does he care. Dr Swadesh Mandal is the independent candidate from Bankura, which recently found place in headlines and on TV.

Who doesn’t know about the latest fires that raged across the thick forests of Susunia Hills? It was no one off accident: the jungle has repeatedly been engulfed by fire of late, causing irreparable loss to the many animals and plants that call the Susunia Hills home.

The constant slaying of Sal and Segun trees, illegal sand mining from the Gandheswari and Dwarkeswar rivers, and dumping of all the garbage from nearby places into these rivers have forced an alteration in their flow, leading to devastating floods as we saw last year. 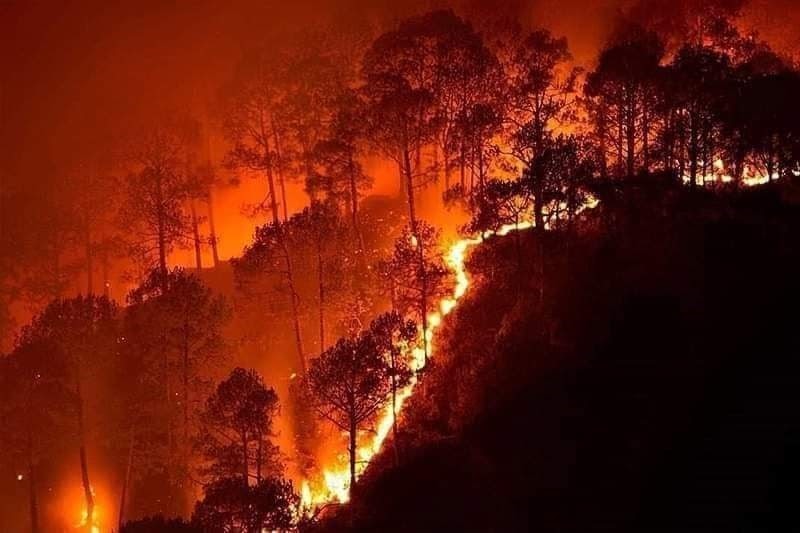 We spoke to 38-year-old Swadesh Mandal, Bankura native and former professor of chemistry, after he submitted his nomination for the Legislative Assembly election as an independent candidate.

There are many ways to organise environmental protection movements even without entering the state. Was it really necessary to stand for election?

We, I mean I and my colleagues, are fighters. We fight for nature. You, in fact all of us, have seen so many movements to protect our Mother Nature but what we don’t see is the outcome of those movements or any sort of improvement. There have been movements which ended exactly where they had begun, and the concerns could never really reach the right destination. That is why we have concluded that to raise the concerns in the right place, we need to be in the system. It is really important to send the message at the Assembly. This is the only way nature and the human race can be benefited.

Bankura was recently on all the news portals due to the fires that raged in Susunia. Did that play an important role in your decision?

Well, the recent fire is the salient reason. The Susunia Hills have caught fire twice recently. Many villages have been adversely affected by factories and workhouses, and many people have been suffering from chronic disease. A large portion of cultivation lands have become infertile.

Strangely, the coronavirus pandemic brought the long-lost glory of our Mother Nature to the surface, when these vicious demons in the shape of factories or pollution were annihilated. Looking at the sky during that time, I could tell the atmosphere was finally able to breathe.

I believe that when trees are cut down, it is an act of crime just like killing a human being. It goes without saying that if deforestation is not stopped, the human and animal conflict will also arise.

Besides, one must have heard our chief minister advocating “Jol dhoro Jol bhoro” (Save Water, Store Water) and it is quite an irony that water itself is a victim of pollution. Buildings are being established by demolishing the existence of ponds. This is what I am fighting against.

What are you focusing on in your electoral propaganda?

I have so many concerns. The main thing I care about is the environment and our Mother Nature. If nature is at stake, human life will be in danger. Industries are destroying nature in the name of development. Coals are being looted mercilessly and no question is raised. We need to bring these concerns today at the forefront.

What I believe is that as long as human beings are there on this planet, nature’s condition will definitely be compromised, but we have to find ways to keep it in balance or controlled by laws.

How have you planned to build your election campaign and ask for votes?

The Election Commission recently accepted my nomination, for which I have been waiting for a long time. I have already started promoting my candidature by spreading the news door to door. I won’t deny it has been difficult for me to find places for meetings or campaigns, since all the places are already in the hands of the mainstream parties.

But it doesn’t mean I cannot. I chose my symbol, a pen-nib with seven rays of light, and I’ll try to reach each and every family of this constituency with this symbol.

How much importance do you think your movement to protect the environment has in people’s minds?

I believe that those who are educated, responsible and aware of the current condition of nature would definitely understand this movement. I will not say that people are ignorant, rather I’m glad to share that more and more people are already aware of the impact of what we call ‘civilisation’ or ‘growth’ on the environment. It is our responsibility to instil knowledge and awareness of our nature into those who are comparatively less aware about it. We must take further steps and it’s a delight to say I am getting good responses from people.

How much do these forest fires and pollution caused by factories affect your people or voters financially?

Well, there is no doubt about the financial losses. The events of conflagration certainly have a very bad impact on people’s health as well as on the cultivation lands. Human lives are directly dependent on forests. After all, trees produce oxygen. Many parts of the forests in Bankura have been destroyed or bulldozed to build offices and residential buildings.

If this goes on, the day is not far when the true essence of life will no longer be there, and we might have to take resort to oxygen cylinders for our survival. Who will pay for this? We need to think beyond the financial losses and focus on the larger impact of deforestation on our lives.

Would you say the forest and environment departments are trying enough to do their job?

The Forest Department certainly does its job whenever a forest is in the grasp of fire, but we the people expect more pro-activeness from them. When a place catches fire again and again, it is far more severe than labelling it as an accident. The responsible departments need to be more vigilant with all the laws in effect.

I worship nature and I do not believe nature has had anything to do with the creation of religion, nor has it created division amongst human beings. Religion is like addiction and is more harmful than opium. It is religion that separates us from each other, sets boundaries and divides us into clans and makes us fight with each other.

Being an Indian is my only identity. I sent my nomination with love and blessing from my family, neighbourhood without having any remote connection with any religion. My only motive is to fight for our Mother Nature. Just remember Nature is my God and serving her is my duty - you might say religion!