'Solar energy production should be decentralised'

For over a year, Karbi and Adivasi residents of Mikir Bamuni Grant Village in the Nagaon district of Assam have been fighting for their paddy fields, which they allege have been forcibly taken for a 15 MW solar power plant to be built by Azure Power Forty Private Ltd. Now, a fact-finding report alleges a number of human rights violations and the “blatant misuse of police power” perpetrated on people over the past year.

The report by the Delhi Solidarity Group alleges the complicity of state and district government officials in “illegally” acquiring the residents’ land. It claims that Azure Power, a subsidiary of the international corporation Azure Power Global Ltd., destroyed the crops that were standing on the villagers’ fertile land and acted in violation of judicial orders and state land laws.

It also establishes the region as an ecologically sensitive zone and an active elephant corridor, which will be adversely impacted by the corporate solar power project. The findings assume significance in light of the Narendra Modi government’s “target” to generate 175 GW of power from renewable sources by 2022, compared with 90 GW last year.

The fact-finding team visited Mikir Bamuni in January and met with state government officials, district authorities and project impacted villagers among others. Its findings identify the Karbi and Adivasi people of the village as the rightful claimants of the land in question.

Locals told the team that this is a “corporate land grab” assisted by state authorities and police officials who worked in favour of Azure Power, employing illegal and violent means to shut down their protests and dispossess them of their land. 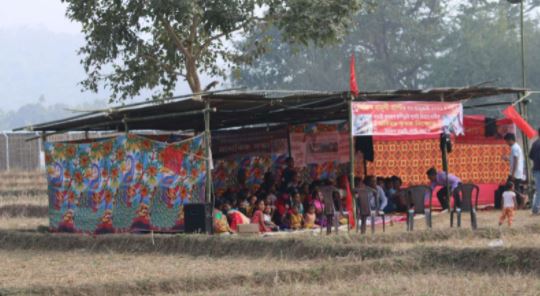 The report further cites instances of villagers being pressured to give up their land by company officials as well as local authorities. It says that some residents were given only 24 hours in March last year to present their objections to the demarcation of land for Azure Power.

According to the report, Azure Power, with the support of the police and local administration, allegedly bulldozed around 200 bighas of land, destroying standing crops on the same day the District Court restrained the company from evicting a resident.

Company officials later claimed they were unaware of the order at the time.

“The people should at least be allowed to harvest crops. They say ‘No, they don't have any crops’... The land has been bulldozed and machines have been left there,” fact-finding team member and advisor to the National Alliance of Peoples Movements Prafulla Samantara told The Citizen.

However, Azure Power denied any wrongdoing in a statement dated February 12: “We are fully compliant with the rules and regulations of the State and the land purchase has been done in a lawful and fair manner, with due consultations with all stakeholders.”

It was in 2018 that the Assam Power Distribution Company Ltd. (APDCL) gave Azure Power clearance to develop solar parks generating 90 MW of power. Of this, the company planned to build a 15 MW capacity plant in Mikir Bamuni.

Residents told the fact-finding team that 93 acres of paddy fields, which they have been cultivating for generations, were forcibly acquired by the company with the help of the state.

The land in Mikir Bamuni is part of a fee simple grant, a 19th century land tenure scheme created by the colonial government for special cultivation such as that of tea.

“The British would term the land ‘waste and uncultivated’ and sell lakhs of acres to big landlords and foreign companies in the 1860s,” Amit Kumar of the Delhi Solidarity Group and a member of the fact-finding committee told The Citizen.

“Large forest areas and fertile lands were also sold under the Grant system by corrupt officials to make money during the same period. Many such Grant lands are not under special cultivation such as tea. These lands are either being cultivated by Indigenous people of Assam majorly for growing paddy or are lying vacant. The tillers of these lands need to be recognised and given ownership rights before any other project tries to get hold of such lands illegally,” he explained.

In a stark parallel to this process, Union minister for new and renewable energy Raj Kumar Singh responded to a question in Parliament last March by reportedly stating that the Government of Assam plans to build over 14 GW of renewable power generating capacity, including 13 GW from solar under its Solar Energy Policy – and that these projects will be built on “barren or fallow land of farmers”.

“The administration created a false report that since 10 years there has been no cultivation on that land. However, anybody can see that the land has been cultivated recently,” Samantara told The Citizen.

According to the report, even Census data over the past three decades shows that the village lands have been under cultivation.

A number of laws undergird the rights of cultivators, sharecroppers and Indigenous people in Assam. Of these, the Assam (Temporarily Settled Areas) Tenancy Act of 1971 is of particular significance as it establishes the heritable right of occupant tenants to continue cultivation, and also lays out a procedure to ensure their land is not taken away illegally. The Act defines a tenant with the right of occupancy as a person who has continuously held the land for three or more years.

“A khatian patta was given to the people to cultivate the land. If they are not cultivating on that land, the land will return to the original landowners,” Samantara explained.

Despite being in possession of khatians—documents dating to the 1980s that recognise their ancestors as occupancy tenants—village residents claim their tenancy rights have still not been settled. Instead, they allege, a private settlement was struck with the original title holders without acknowledging the rights of the tiller.


The villagers’ resistance has been met with violence and arrest. “We have also met with women and children and heard very disturbing accounts of how they were terrorised by the local police and company officials. They are traumatised, and yet no one from State welfare agencies, or human rights commissions had reached out to them till when we visited the site,” said committee member Bhargavi Rao of the Environment Support Group in Bengaluru.

The team worries that the recent push given to renewable energy production in India will lead to further violent dispossession of people who are Indigenous or marginalised.

“There is a huge push for solar power generation in Assam with an ambition of becoming the largest solar power producer,” said Kumar.

“In this context, when a small 15 MW solar power project is grabbing 286 bighas of land in Mikir Bamuni Grant village, the scale of future land grab can only be imagined as a disaster for the people of Assam, increasing further landlessness and putting a large area of agricultural land into non-agricultural purposes.”

Committee member Leo Saldanha, also from the Environment Support Group, explained that “Prime Minister Narendra Modi’s promotion of 450GW of energy production from renewable sources is fraught with various inconsistencies, particularly the lack of appreciation of various details relating to finance demands, and social and environmental impacts. It appears that the message to State Governments is to assist the transnational and national private sector to secure land in any manner.”


The Assam Solar Energy Policy 2018 provides for setting up solar projects on barren land. But village residents emphasised to the fact-finding committee that the Azure Power solar project contradicts this provision, as it is being developed on fertile paddy fields.

“In the name of green energy, you are destroying that agricultural land... I agree green energy is important but you have to follow the policy that exists,” said Samantara.

Going by the recent land grab in Mikir Bamuni, “one can expect such land grabs across India, all in the name of meeting the Paris Climate Agreement targets, and in making India a major producer of solar energy,” Saldanha told The Citizen.

He observed that such so-called “just transitions” which claim to respond to climate change lie outside the purview of environment laws in India. This despite the Supreme Court and National Green Tribunal’s directions that such projects too must undergo an environmental clearance review.

Samantara suggests that solar energy production be decentralised, instead of being concentrated in the hands of big businesses: 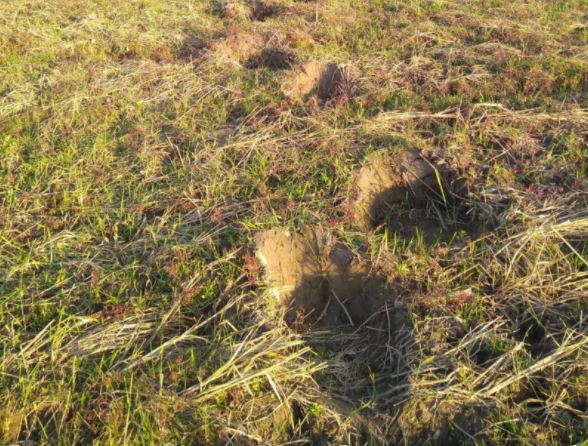 The report further indicates that the village lands fall within an active elephant corridor. The fact is reportedly noted by the Union Ministry of Environment, Forests and Climate Change itself.

On two of the three days they visited the Mikir Bamuni Grant Village, the team witnessed elephants passing through the village and surrounding areas.

“The area is an elephant corridor but it has not been officially declared a corridor yet,” said Samantara.

According to Rao, the regular passage of elephants shows that the Forest Department consented to the project “when they should have declared the area an ecologically sensitive elephant corridor to protect elephants.”

Assam has some of the highest instances of human-elephant conflict in the country. Many experts think this conflict has been intensified due to increasing urbanisation and wide-scale deforestation for big-ticket infrastructure projects.

The forests surrounding Nagaon host several endemic plant species and around 479 species of birds, the report states. The wetlands or beels in the district also form critical ecosystems that are rich in biodiversity but sustain local communities, especially fishing communities.

However, Rao thinks such diversion of land in Nagaon district for infrastructure purposes will only increase with time.

The report recommends that the state government return the land to the Karbi and Adivasi farmers with Azure Power bearing the cost, as per the ‘Polluter Pays’ principle.

It asks for compensation for those on whom human rights violations have been perpetrated, with an enquiry to investigate reports of police excesses and fraudulent activities by district and revenue officials.

The report also recommends that the Union environment ministry subject solar and other renewable energy projects to social and environmental review, as per the directions of the National Green Tribunal (South Zone) and the Supreme Court of India.