‘We have become the caretakers of the river’

VADODARA: Crossing the river bridge we went down toward the water. A fisherman with all his valuables sitting on a platform underneath. This is his home. A man lay asleep next to him, undisturbed by the interview.

Down the dirt road is the Mahi river, where more fishermen are selling fish to customers.

The river is used to supply freshwater to Vadodara and other urban areas, especially since 2005 when the Sindhrot check dam was built. Its damming and diversion have led to salinity and contamination of the groundwater used by people who live nearby.

The dam is also a popular tourist attraction.

‘Since the check dam was built there are fewer fish in the river. Earlier we would catch a lot of variety and earned enough. Now we supplement our catch by selling fish bought from outside,’ says Shamu.

He indicates the polystyrene boxes lining the riverfront. ‘All of these boxes come from Andhra Pradesh. They farm fish there. Andhra supplies fish to a lot of parts—major cities in Gujarat like Bharuch, Surat, Baroda, even states like UP and Bihar.’

‘No I’m not from Baroda, my native place is Bihar. It has been around 15 years. I was here before the bridge was built.’

Has it brought any improvement to your lives?

‘Nothing. Not much at all. We live here. We earn, eat, catch our fish, and go to our native villages from here. Not much development in our lives.

‘By evening the bridge is houseful with cars. It was constructed for the public, nothing to do with us, we just live under it. We fish in the morning and make our food at night. There is no other work.’

The bridge was completed in 2001. Since then the Makarpura suburb has been turned into an industrial hub, subsidising multinationals like ABB, Larsen & Toubro and Philips, and GIDC, the Gujarat Industrial and Development Corporation.

‘That reservoir built in the river—it supplies water to all of Baroda. The main city, Nandesari, Makarpura, all the water goes from here.’ I ask if they face any trouble going back during the lockdowns.

‘Pappu Yadav of Bihar is a friend to the poor. Last year during the lockdown, in all the big cities like Mumbai, Ahmedabad and Delhi he sent more 50 buses for people like us to reach our native places safely.’

Rajesh Ranjan, popularly known as Pappu Yadav, formerly with the RJD is now chief of the Jan Adhikar Party incarcerated in Virpur jail.

They say there have been no corona cases among the fishermen here. ‘None of us has contracted the virus yet. Usually we depend on information from television or our mobiles. If corona happens then we make karha.’

Shamu adds, ‘I don’t go to government hospitals, they add 200-300 rupees to the bill so I go to the private ones. No government doctor comes here. If we have any trouble we go to the other villagers. The police help us too sometimes. You see, we’re not from here. We are migrants.’

I ask if fishing meets their financial needs.

‘There is no alternative so we have to do this. It’s not like we will get government jobs anywhere. Where do you see development?’ he laughs.

‘This is our workplace and we send money home. I have three boys. One works in a factory in Surat, the other two are staying in the village.’

He says covid is not the only problem people are facing.

‘The police keep coming. Today a 21-year-old man jumped from the bridge. In a month at least three or four people jump from the bridge. This is a common occurrence, happening before corona.

‘Usually couples in love jump together. Old people bored with their life jump too.’

There is a temple near the riverbank built by the fishermen who live here, for the river goddess Mahi. The fishermen call it Mahisagar because it connects with the sea.

Pictures of Hindu deities and offerings litter the edges.

A fisherman wearing a white shirt and no mask joins in. He agrees there has been no covid among the fishermen. He is also from Bihar and has lived and worked in Vadodara 20 years.

‘The whole area from here to Baroda, that much garbage—dry waste, plastic, flowers and plastic flowers, garlands, all kind of things are dumped here.’

‘People keep jumping from the bridge. Today the body of a young man was sent.’

They explain that flower offerings cannot be deposited with ordinary garbage. This auspicious refuse is usually tied inside plastic bags and thrown into the river.

They don’t worry about the garbage accumulating along the river because the tide will float it to the Arabian Sea.

Shamu adds, ‘All the solid waste settles on the riverbed—when we spread our nets no waste gets stuck. We have become the caretakers of the river.’ There is a pond on the way here with a heavy smell, and a dense layer of algae covering most of the stretch.

They explain, ‘Gili nadi. Wastewater from the GIDC chemical plant nearby is channelled into the pond. That water comes to the river as well, but the check dam was made so the river water remains fresh.

‘This water reaches Vadodara too. You too get your water from this river, but you would filter it before drinking.’

They say there is no municipal or other piped water supply here.

‘We drink the river water and use the same water to cook our food. We are migrants here. We don’t have facilities like freshwater taps.’

‘There is pollution in the water, but more towards the edges. We don’t have the technology and can’t afford to wonder if the water is safe to drink. If we start thinking like that we’ll have nothing to drink.’

‘Until we get our ID cards, documents, or a temporary residence proof made we have no one to look after us here. No support from government aid or schemes.’

‘We boil our dal in this water. Times are difficult sometimes but we’re used to it now. We’ve had a lot of practice,’ he laughs. ‘As long as the river is flowing, the water is alive.’

‘Our nets catch the number of fish written in our fate that day. Sometimes we catch 40 kilos, sometimes 10 kilos. Some days nothing. It all depends on our fate.’

Thinking Vadodara is predominantly vegetarian, I ask if they have faced any trouble for selling fish.

‘There’s nothing like that here. Earlier one had to get a licence made to sell fish but now there is no such rule. Gujarat is no longer a vegetarian state; everyone has become non-vegetarian here,’ he laughs.

We discuss the growing pollution of the Ganga back in Bihar, and the bodies that were seen floating in the Ganga. They say the Bihar and UP governments are busy playing the blame game while the river becomes more and more polluted.

‘What can we do?’ the second man asks. ‘If we start thinking about it, it becomes a case of big talk from small mouths.’ ‘We start our day at 4 in the morning and work till evening. By 10 at night we have cooked and had our supper. Sleep comes naturally after all that work’ he says, sounding content.

Shamu adds, ‘We are poor and have to do hard work to earn money. So we don’t get time to think. So many people jump from the bridge, attempting suicide. We might save half of them, but half of them die.

‘The ones we save, we are helped by the villagers nearby. We rescue 60-70 lives in a month. In the process we have built good relations with people living nearby and with the police. We don’t do anything objectionable.’

Do the people living up there have amicable relations with you?

The second man says grimly, ‘People from above often throw stones. But we live right under the bridge so we don’t often get hit.’

‘The local people sometimes. Otherwise it’s a peaceful place. We aren’t locals from here so we tolerate it.’

But it’s one country!

‘Some say, if someone slaps one side of your face, turn the other side to him. Some say give me your blood, I’ll give you freedom. Do you know who is the biggest deity and the fiercest demon on earth?’

‘The most brutal demon on earth is man. And the most benevolent deity is also man. People are responsible for most of the pollution around us today, polluting the river, wind and soil. But it’s in people’s hands to ameliorate it.’

‘If we face a problem we would go to the gram panchayat. If that doesn’t settle it we go to the district magistrate. If things still don’t get better we have to reach the higher levels of government, and reach the central government.

‘Now after running around so much, won’t my work stop for the day? I won’t be able to earn that day or more.’

Shamu adds, ‘We don’t have a union. If we did it would be good for us. Else, if we approach a big officer to put in a word they taunt us asking if we have become bigger than them. Such discrimination happens.’

‘Things are not easy to resolve. You will come and buy your fish and go home, but we would be at a loss if we kept chasing after these problems.

‘In that sense, there are difficulties and there aren’t.’ 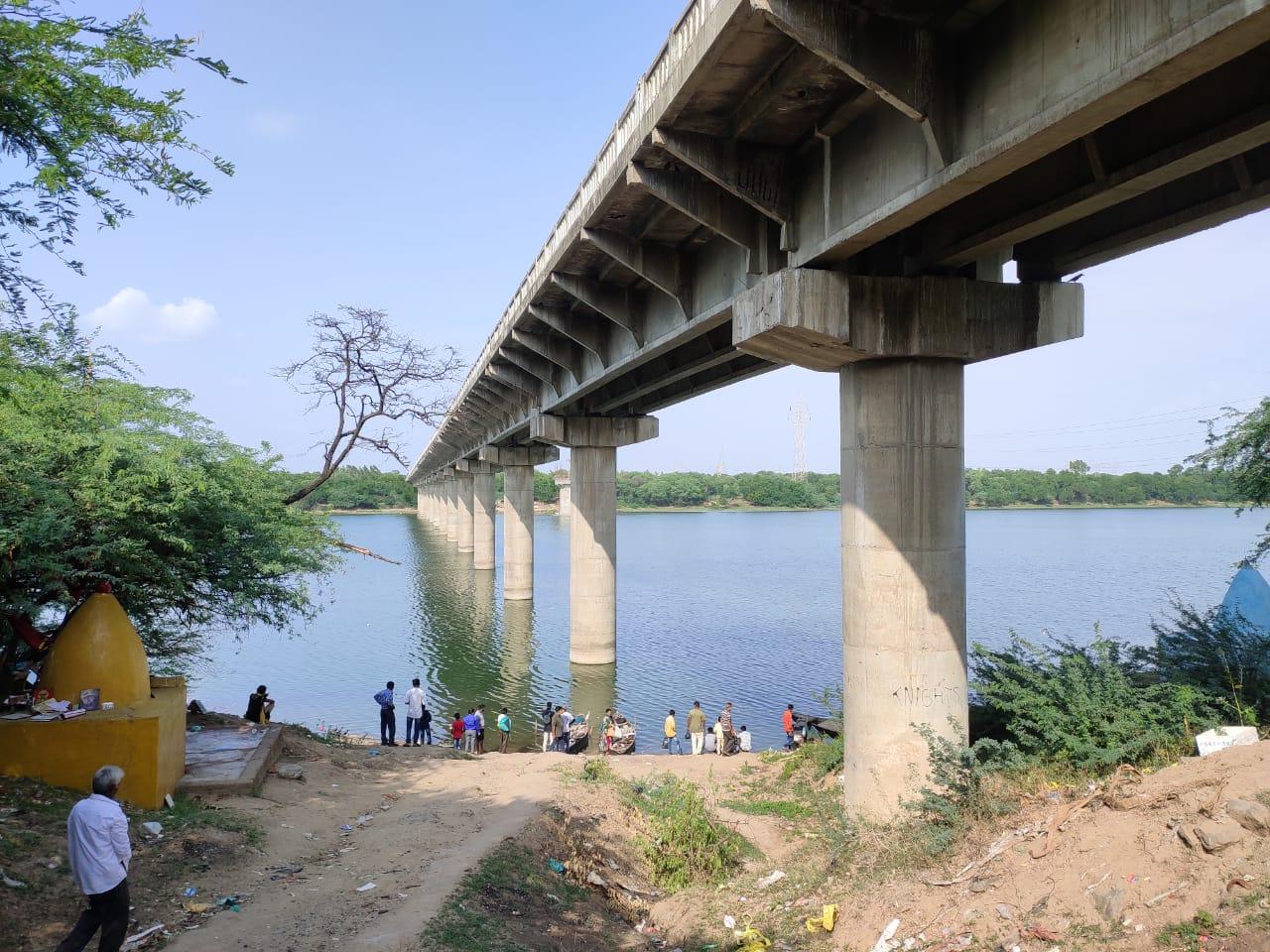