'We just lie here all day, and do nothing'

Sitting down in the expansive Recovery Centre of the Delhi government’s Sarai Kale Khan 500-bed homeless shelter, as caretaker Vicky Kanaujia (32) begins elaborating about the amenities offered to residents, he is interrupted by a tall skinny boy with curly black hair.

“Chai?” the boy asks, holding up a metal kettle blowing puffs of steam out of its petite mouth.

The boy pours tea into a paper cup on the table, and walks away to offer it to other inmates lying on their beds.

“They get tea at 7 am, breakfast at 10 am, lunch at 1 pm, tea again at 4 pm and dinner at 7 pm,” says Kanaujia, a caretaker from Society for Promotion of Youth and Masses (SPYM), the NGO contracted to manage this shelter owned by the Delhi Urban Shelter Improvement Board (DUSIB),

“That’s Vicky, another resident. He has been here for many years. We provide all facilities. Everyone stays happily here.”

'Everyone' here means Delhi’s homeless and destitute, some first-time visitors to the shelter complex to escape the city’s plummeting winter mercury, and some frequenters in the aftermath of pandemic-caused layoffs. The cohabitants are now community, living in buildings, porta cabins and tents that ring a public square where everyone congregates in the evening to cook on open stoves, gossip around bonfires or watch their children running in between swings.

As the Delhi government winds up its winter shelters for the homeless for another year, we speak to these residents as they laud the facility’s amenities and NGO workers. But they also mention what is missing from their well-oiled welfare lives.

“The facilities you find here, you won’t find anywhere in the city,” says Vicky Das (17) after serving tea to everyone in the Recovery Centre, the 35-bed room where those needing medical attention are housed after they are brought in by rescue teams, that go out every night between 9:30 pm and 4:30 am. Das ran away from his home in Tamil Nadu at the age of 11 and lost his parents soon after.

“We get free medicines and transport to the hospital, and hot water and electricity all day. I wash utensils here but used to work at Rekart, a waste management company. They laid me off because I fell ill.”

This Recovery Centre is one of the six permanent shelters in the complex. The others are four Family Centres for couples with children, and one Adult Male Centre. There is also a temporary tent, one of 211 set up in the city, as part of the Delhi government’s annual drive to rehabilitate the homeless into winter shelters between November and March. The original capacity of all city shelters was 19,874 beds, revised to 9,240 beds after COVID protocols necessitated social distancing.

“I came to Delhi in 2001 and worked in a hotel kitchen until I broke my leg. I was lying on the street and they took me to Safdarjung hospital for treatment,” says Parbat (35) from Darjeeling, who has recently been transferred to the Male Centre after spending 10 months in recovery. "Food comes on time here, there are even daily COVID vaccinations outside for those with Aadhar cards. I have no complaints,” he says.

Tejpal (44), an inmate sitting on his bed next to Parbat, says he came to Delhi from Uttarakhand many years ago and has been staying here since the lockdown because he hasn’t found work. “We all know each other now,” adds Ravi Shankar Sharma (61), from Rajasthan, who also came here during the lockdown and spent a year in the Recovery Centre after a lung operation. “The medicines and food are all on time, and there are plenty of blankets. Comforts are like home here,” he adds.

Ishaan (42), a security guard at the national highway being constructed nearby, says he worked in Bangalore before coming to Delhi but rents were too high to live anywhere but at the shelter. “This is the best homeless shelter in Delhi,” he says with a smile, “everyone helps each other here, unlike other shelters. But there’s nothing like home. And you will have nothing to send back home if you sit here all day. You won’t be handed a job here.”

Lakshman (45), native to Jaipur and formerly a tour guide in Paharganj, says many of his inmates are here because of struggles with intoxication and addiction. “I used to do drugs and came here after problems with my kidney. I’ve recovered but many inmates are still estranged from their family and have hurt themselves repeatedly,” he says.

“My husband worked in party management but since the lockdown, there’s no work so we can’t think of leaving this place,” says Nageena, cradling a baby boy in her arms. She came to Delhi from Agra with her husband and lived in a rented house before the pandemic.

“During lockdown it was very difficult and I got no labour work at all. We get free food, water, shelter here, but there’s no hope of leaving because how would I find any work?” asks Mangal, who has been living at the shelter for 5-6 years with his wife, Kusum. “We’re just whiling our life away here,” she adds, “we had a house in the village and lost it. We just lie here all day and do nothing.” There is no plan for livelihood generation among the homeless, according to SPYM supervisor Sujit Nath, but DUSIB had begun computer classes in this shelter earlier. The SPYM had also started skill training activities in other city shelters but COVID put a stop to most of them, says the NGO’s Sarai Kale Khan supervisor Ratan Kapoor.

“There were commercial laundry programmes and we used to train women in stitching, tailoring and beauty parlour work, and men in plumbing,” says Nitesh Kumar, an SPYM project coordinator.

“There are several more challenges we face when it comes to rehabilitating homeless people, like unemployment, de-addiction and mental disorders,” says DUSIB Member Expert Bipin Rai, “cooperation with other departments like the Social Welfare Department, Health Department and Municipal Corporation is what we need.”

“A shelter will only protect a homeless person from the cold, the larger goal should be to reintegrate them into civil society,” says Sanjay Kumar, co-founder of Aashray Adhikar Abhiyan, a 20-year-old organisation working towards connecting the homeless with citizenship entitlements like Aadhar Cards, voting IDs and bank accounts, “We believe in holistic upliftment of the homeless, because like anyone else, if you give them equal opportunity they will rise.” 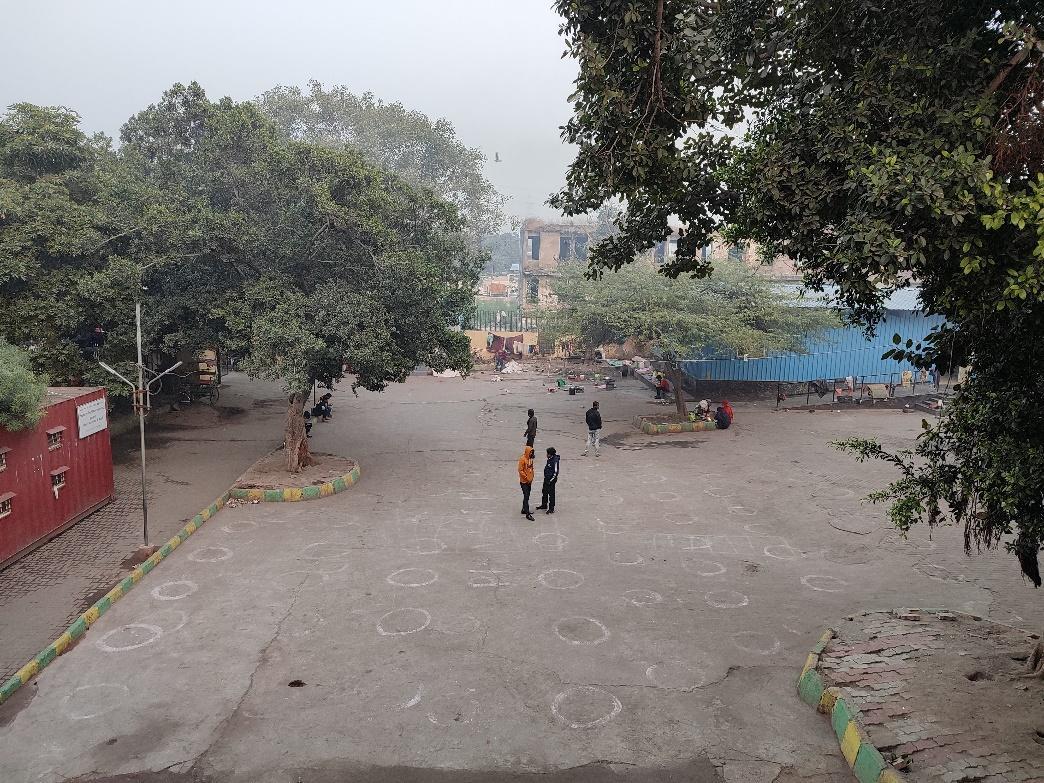