The top Google reviews for Delhi’s famous Midland Book Shop (located in Aurobindo Market, with branches in Janpath, South Extension and Gurgaon) talk about the owners and staff being the best part of the experience. This is an opinion seconded by Midland regulars, some of whom have been frequenting it for most of their lives, and have grown up alongside it.

Indeed the owner of Midland, which is one of Delhi’s oldest bookstores, is himself the last of the city’s legendary old bookstore founders to survive. He is a figure to behold. At the age of 92, Mirza Yaseen Beg sits outside his shop in Aurobindo Market, next to a stack of books in English, some beautiful jute bags for sale, and a smaller stack of Urdu books for his own reading.

Slightly hard of hearing, Beg takes a minute to respond to questions, and says with a smile: “I am currently surrounded by thousands of books, while lakhs have passed through my hands before. A bookseller can never have favourites, for us each book is life giving.” Workers at Midland add that Beg enjoys reading the Punjabi Urdu and Persian poet Alama Iqbal’s verses quite often.

Yaseen Beg has spent his entire life around books. He stepped into the trade at the age of 15, working at a bookseller’s on Sultan Road in Hyderabad. Here he got only books in return for his help, until one day the business itself was handed over to him.

In 1971, Beg moved to Delhi to restart his business here. He began with a small NDMC stall in Connaught Place where he shared space with shoe-shine boys at the India Coffee House near Regal Cinema. After Indira Gandhi imposed the Emergency and the coffee house was demolished – for it was a hub of intellectual activity unsuitable to the country’s matriarch – Beg lost no heart and started a small book shop at the Rambles restaurant across the road.

Later, in 1978, he opened New Book Land at a circular stall in Janpath set up by the NDMC for florists, but later allotted to him because of his promise. New Book Land is the oldest of Beg’s book shops in the city, and it was followed in 1985 by the Midland book shop in the then newly constructed Aurobindo Market.

“Hyderabad and Delhi have different cultures – Delhi is home to different people from all over the country – but people mostly read the same kind of books in both cities,” says Yaseen Beg. “When I started working in this trade it was the age of Nawabs, a time of Urdu and Farsi literature. At that point in time, Osmania University’s Urdu translations were in much demand,” he adds with an air of nostalgia.

“Now we are surrounded by a big sea of English. This sea has taken me to book markets in London and Frankfurt, from where our books are imported, but I haven’t seen a lot of difference in the market. All people are united by these books.”

Beg made the shift from selling books in Urdu to those in English when he met Tulsi Shah, a Mumbai-based importer of what booksellers refer to as remainder copies – unsold books which are returned to the publishers. Unlike others who sold these copies at full price, Beg decided to offer them for the lowest possible profit, a model which ensured a huge turnover from Midland’s large and loyal customer base.

According to Beg the unbelievably low rates have made literature accessible to more people. Midland still sells books at much cheaper rates than any other bookstore in Delhi, he says, often with discounts up to 20%.

“For those who like this work, who are truly interested in books and this trade, such things pose no difficulties. I came into this trade because I like it, not because of any compulsion or helplessness. I started working with selling books, and I plan on doing the same till the end of my life,” he says.

Beg is well regarded among his customers for his extensive knowledge of authors and titles of all stripes. “Mr Beg can recommend books you’d like just by looking at your face; he recognises visitors and is so dedicated to them,” says one customer.

When asked about this superpower, Beg laughs and calls it an instinct. According to one of the men assisting at the shop, all of this is a result of his memory and his dedication to selling books for the love of reading. A passing customer remarks how “Mr Beg reaffirms the joy of physical bookshopping in the age of Amazon and Flipkart.”

Mr Beg believes that no bookseller can ever go out of business, not even in an age of e-retailers, if they conduct their trade ethically. “Be it business or life, I trust God. Ethics are important: whether it is buying or selling, I am indebted only to God and to no other person in the trade,” he confides.

Beg finds unmatchable comfort in sitting outside his shop, watching the day’s happenings, interacting with customers new and old. He also supervises the major work in his bookstores, such as the coordination of orders and shipments, while his sons run the daily business.

“It’s a simple life,” Beg says, “to wake up every day, come here, and go back home in the evening. But I feel at bliss here, nothing troubles me.”

The gentle old man says he thinks of his customers as family. “I am blessed that God has given me customers who come to me from different places, and keep coming back. Many who started visiting us as children bring their own children to the store today.

It is striking that all four of his bookstores are run by his four sons, and have in recent years been taken over by his grandsons as well.

Almost singlehanded, Mirza Yaseen Beg seems to have created a reading culture in the city which is truly being passed down the generations. 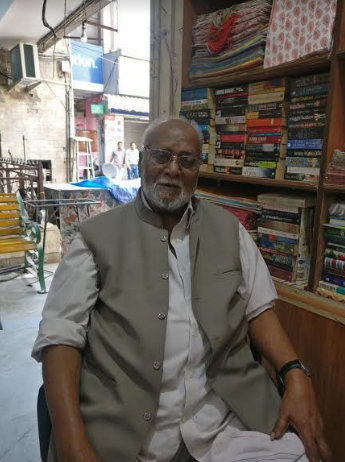 Homeless In The Bitter Cold