80% of the damage to university property was in the library

The whole of Moulana Ali Jauhar road - outside the Jamia Millia Islamia University in New Delhi - is filled with protestors, with slogans reverberating in the air.

It looks more like a carnival than a protest. People are huddled into small groups, with each group either chanting slogans, singing revolutionary songs or engaged in animated discussion, in all probability about the newly passed Citizenship Amendment Act.

From a distance nothing seems clear but as one approaches the slogan ‘Hum kya chahte - Azadi!’ hits a crescendo then falls, and another slogan from another group hits the air - just like that wave diagram we were taught in school. Amidst the cacophony, a group of students are silently sitting on the sidewalk, busy reading books. 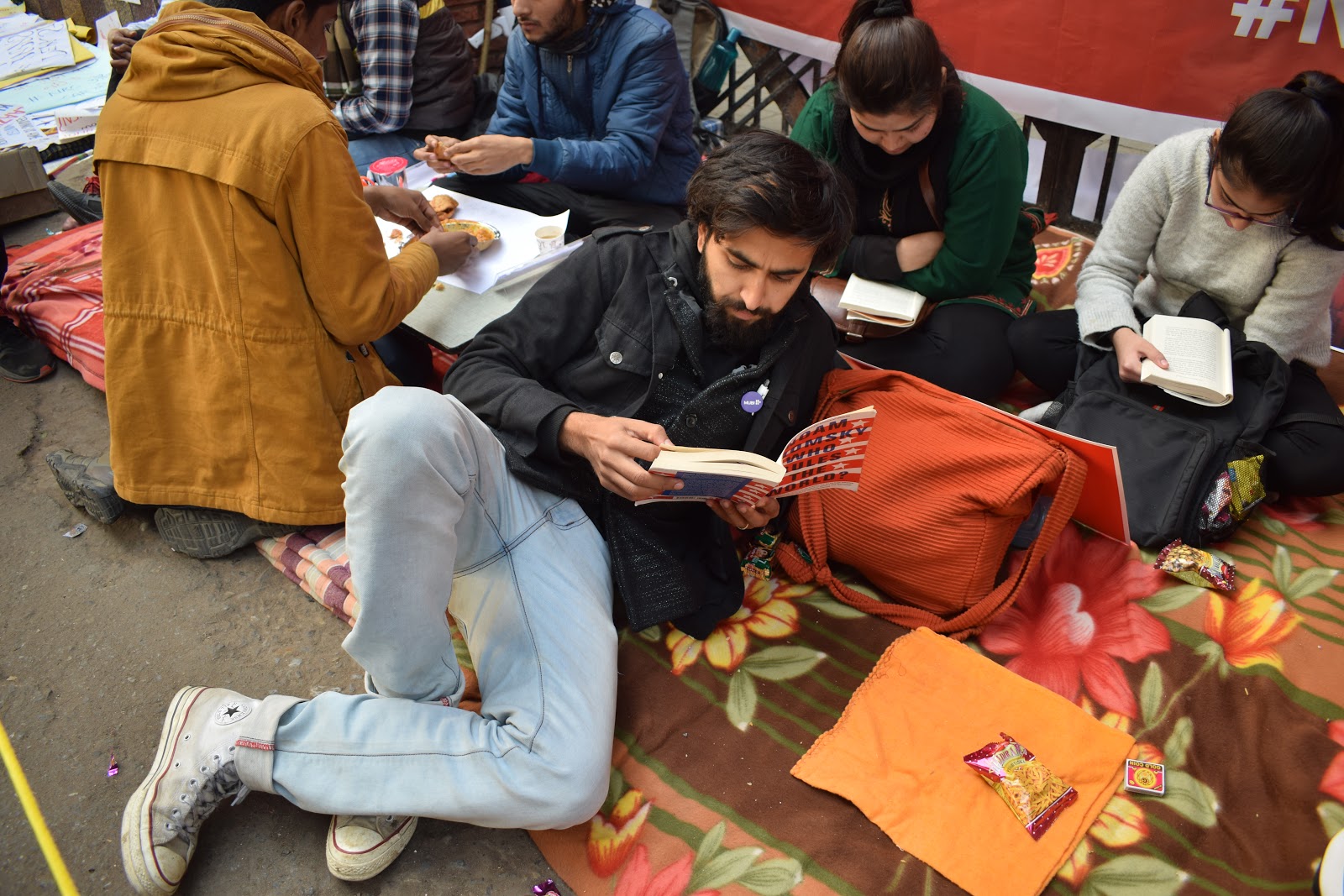 With their university library vandalised in police action, and the university administration announcing immediate vacations after protests erupted on campus against the CAA and NRC - which were spreading across the country - some students have started reading on the streets, creating what they term as ‘roadside reading spaces’ that offer an alternative to the library.

“It is not only aimed at continuing with the tradition of learning but also serves as a unique protest,” says Milan Pondal, reclining against a parapet beside a white board that reads ‘You can vandalise our library but not spirits’.

Pondal is reading Ian Black’s Enemies and Neighbors: Arabs and Jews in Palestine and Israel, 1917-2017. In the book Black attributes the rise of right-wing trends to, among other reasons, the conflict between Israel and Palestine. 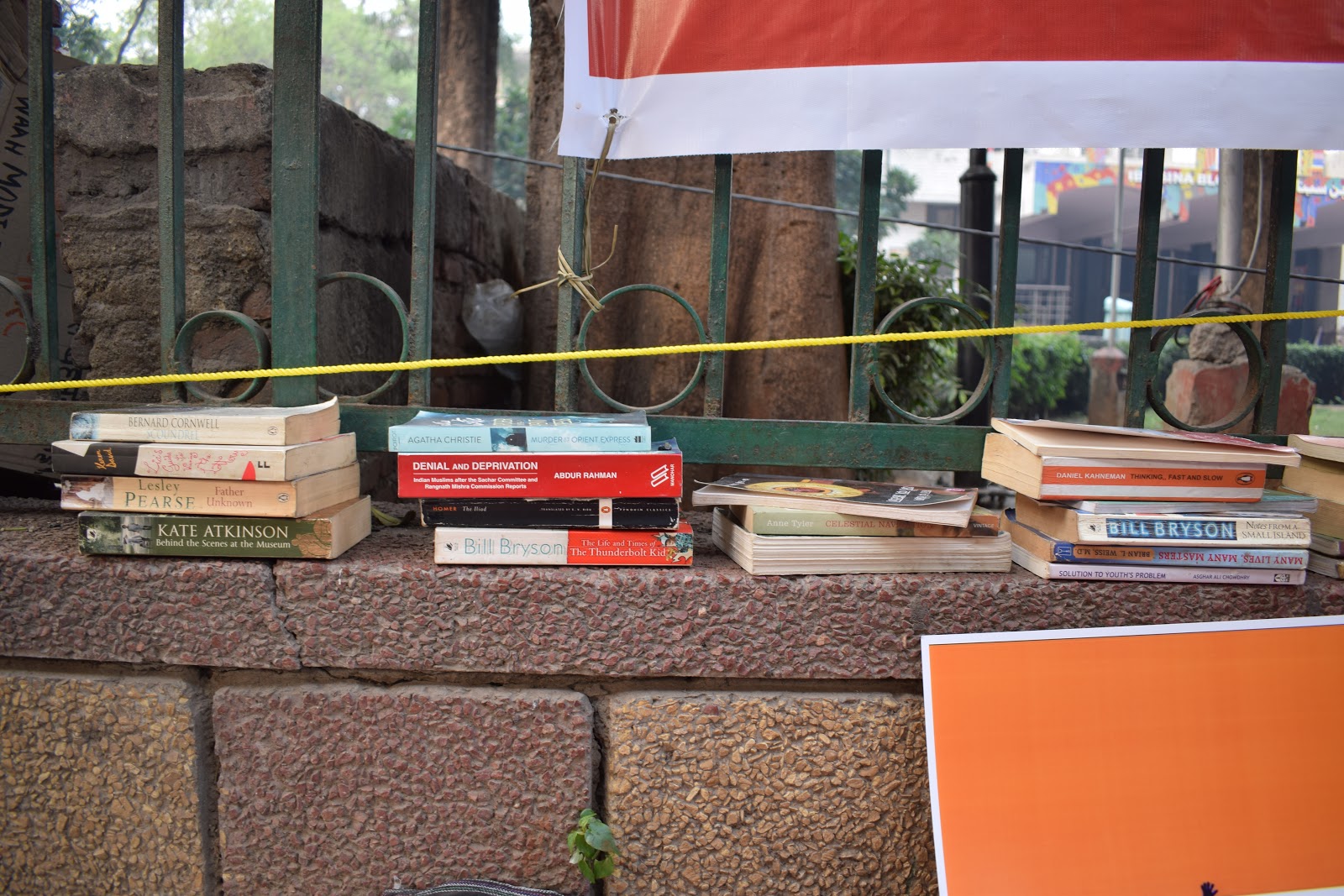 Pondal believes that India is facing similar challenges: “Our country is moving towards the right. Actually we are already there. The signs are ominous. But students of the university will continue to fight,” he says.

Jamia grabbed headlines across the country and in the international media after the Delhi Police controlled by the central government barged into the campus on December 15 and thrashed students, injuring hundreds. The police action led to yet more protests across the country in solidarity.

“We cannot win this battle by violence. How can we even counter the state violence inflicted upon us? We are barehanded while the police are equipped with all kinds of weapons. So, the best way is to come out in large numbers and protest peacefully, sing songs, chant slogans and read books. The government will have to bow down if we keep protesting for our rights,” says Abdul Rashid, who is reading Mahatma Gandhi’s Experiments with Truth.

“Mahatma Gandhi’s message was to live with honesty and fight with the means of non-violence. We are following his path. We will fight till we can. This is our peaceful war against the illiterate government,” adds Rashid.

The university library where the police chased after students, beat them and also lobbed teargas shells while they were studying, is extensively damaged. A report from the university administration says that 80% of the damage to varsity property was concentrated there. 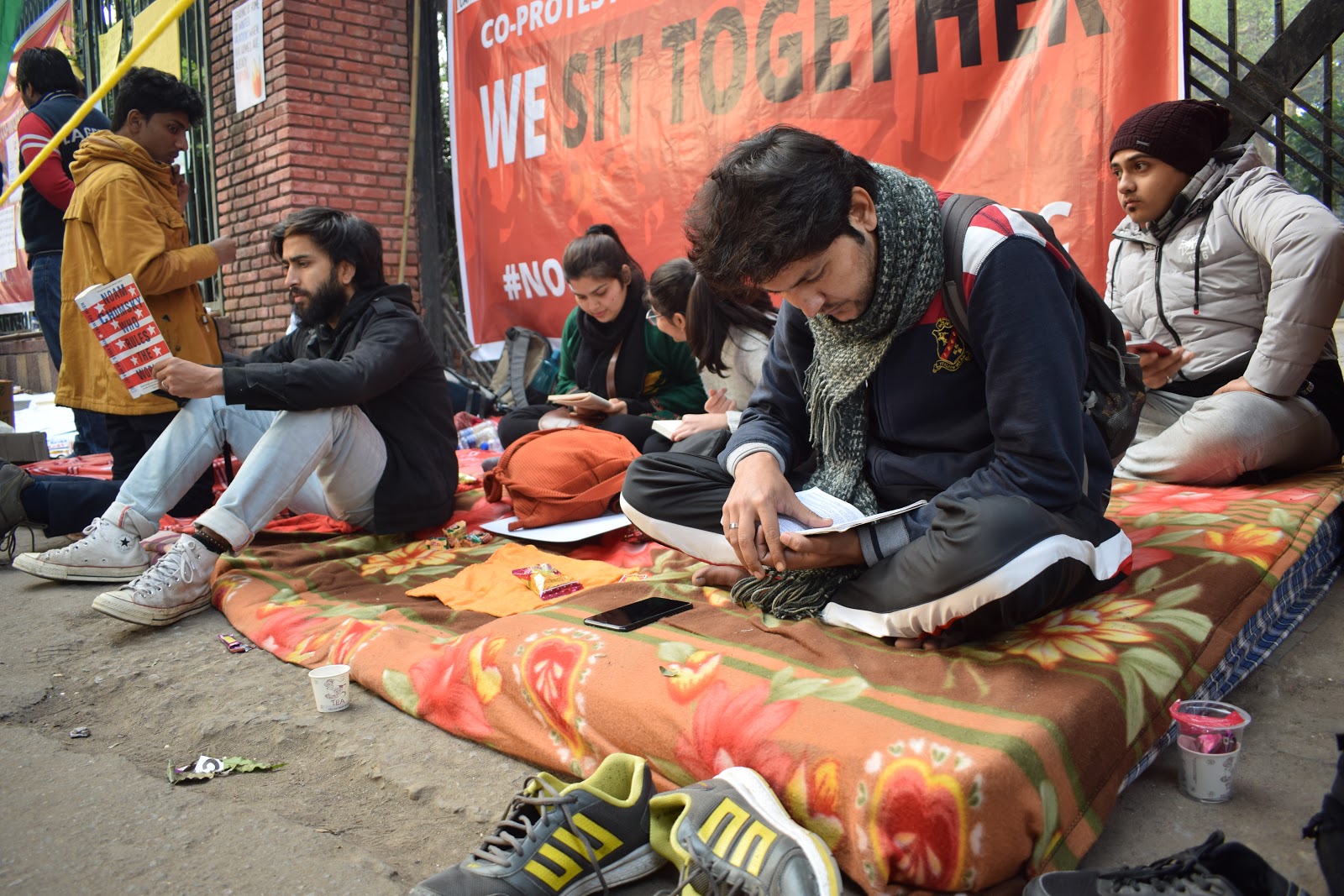 The protesting students then called on students and scholars to “Read for Revolution”, urging them to join regular reading sessions outside the campus.

“Many people come here. Not only students but also commoners from every walk of life sit for some time and read. Many professors and artists also joined us. It is a different form of protest. One may say it is mere symbolism but even then it is a very strong and creative idea,” says Aman Khan, a student at Jamia who is also reading by the roadside. 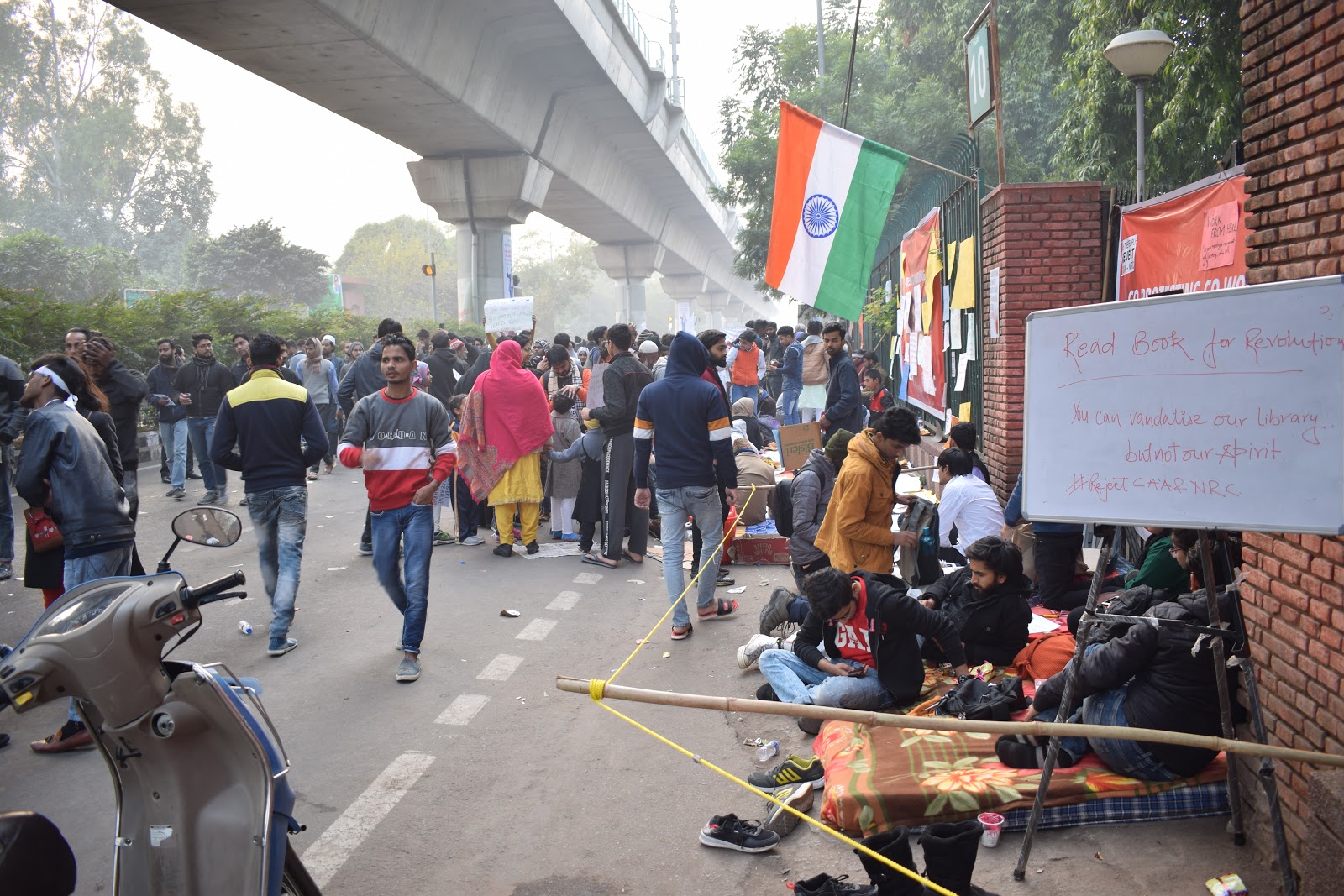 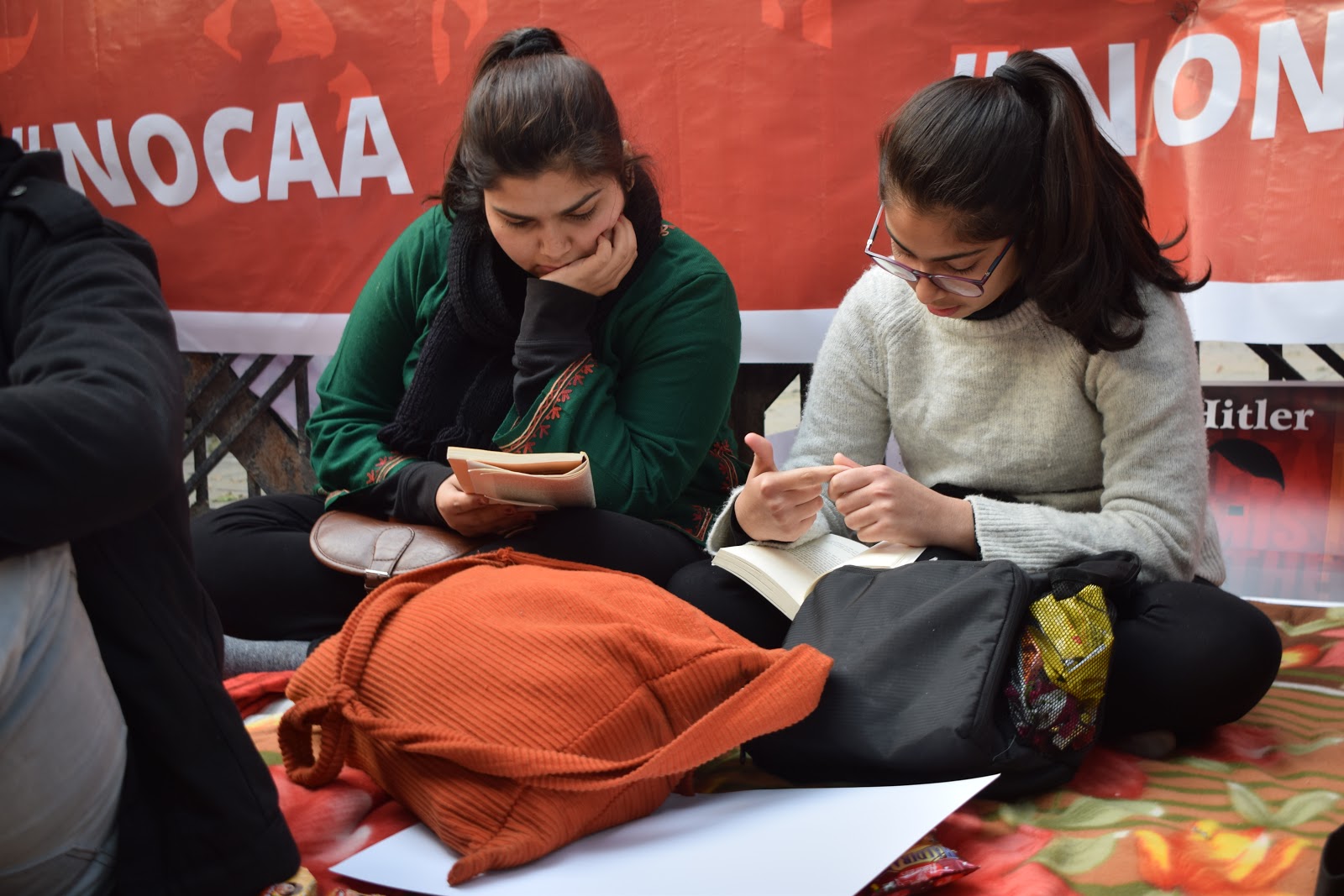