The book depicts the upheavals that those two momentous events had then caused among the Burmese, Indians living in British Burma and the Indians of the INA, depriving them of their peaceful livelihood. It also recounts in-depth how the Burmese struggled for independence both from colonial Britain and the Imperial Japan.

What had further worsened the situation were the post-independence conflicts between the majority Burmese and the ethnic minorities, particularly the Karens. And to top all that was the military coup of 1962, and how the courageous and as yet inconclusive movement by Sau Suu Kyi for democratic change has continued unabated between the regimes of successive military juntas after that coup?

The story actually begins with Stanley (an Indian) abandoning his native Calicut at age 18 in search for greener pastures in Singapore, his medico sister funding his passage. It was there that his singing talent blossomed, but the money that he earned was not enough to make ends meet. So as per the advice of his Chinese friend Frank, he became an independent salesman of sort.

In due course, Stanley’s business flourished. His next destination was Malaya (now Malaysia). He tied up with an Australian company to distribute potatoes in Malaya. But all those good days soon ended when the Japanese reached Malaya with stunning speed, mauling the hastily retreating Allied Forces with a savagery unparalleled in the recent history of ‘human primitivism’. The Japanese carnage, in a way, turned into a blessing for Stanley who per force became an interpreter with them. And soon thereafter Stanley joined Subhash Chandra Bose’s Indian National Army (INA). And after the defeat of the Japanese in Burma, Stanley and his band of eight INA men surrendered to the victorious British Forces.

To cut short the long story, Stanley married Dora, daughter of a relatively well off ethnic Karen. In due course, Dora and Stanley became the parents of six children, the author Simon being the oldest and lived a content life; however, when Nationalization began in Burma in February 1963, particularly targeting the Indian banks and even small Indian businesses, the family returned to India in 1966 as refugees.

A fascinating book, indeed. The protagonist Stanley comes out as a man of much courage and ingenuity, and wins the hearts of the readers. A must read for those interested in Burmese history and the political cross-currents in the context of South East Asian landscape.

In an email interview with THE CITIZEN, author Eugene Lawrence speaks about the book that defies a genre positioning.

The Lacquered Curtain is neither wholly fictional nor historical nor even autobiographical. What motivated you to pick on a theme that defies a ‘genre’ positioning?
The illustrious and talented become known in no time but the world is full of individuals, unseen and unheard of, and their little stories buried with them. Yet, it is these individuals who symbolize a multitude of people who had gone through difficult times with utmost courage, anguish, fear, hope and resignation. That was my real motivation.

What was the immediate cause for the military coup in 1962?
A weak government that was unable to reach an accord with the restless and dissenting minorities, rampant political rivalry among the Burmese and a strong nationalist desire to achieve supremacy.

What exactly were the main factors that led to a perennial state of conflict between the majority Burmese and the ethnic minorities such as the Karens, occasionally exploding in insurrections?
The ethnic minorities had expected independent statehoods, autonomy etc but the then British Labour government ignored them and handed the reins of the government to the majority Burmese, thereby greatly upsetting their expectations. That left no option to the minorities particularly the Karens but to rebel. Thus the insurrection of 1949 was the beginning and it never ceased until the rebels were vanquished in recent times.

In what way the Burmese politics would have been different if Gen. Aung San was not assassinated on that fateful day of 19 July 1947?
There was an apprehension that Gen. Aung San would become an undisputed leader once he formed the government. Also being sagacious, he would have reached an understanding with the various disparate and dissenting groups, and it would then be virtually impossible to unseat him.

What caused the massacre in July 1962 at the Rangoon University Campus? And what punishment General Ne Win – its perpetrator received?
In the game of politics, students the world over provide a fertile ground for fomenting dissent. Rangoon University was no exception. When the students demanded democracy, the army did not take it kindly. Any form of revolt had to be crushed. As head of the army, the General was beyond punishment as were the officers who took part in that massacre.

Burma had for more than a century been an integral part of the British India from 1824 to 1937. Both India and Burma got their respective independence almost at the same time. What then in your opinion were the reasons that while Burma suffered from coup after coup and India continues to have a stable Parliamentary democracy?
The British ruled Burma from 1824 to 1948 interrupted by a dubious Home Rule given by the invading Japanese that lasted from 1942 to 1945. India got its independence in 1947 as did Burma, and both the countries formed democratic governments. However, Burma had a coup d'état by the military quite early that sowed the seeds of the subsequent coups.

The long marriage between your father and mother was understandably a happy one. To what do you attribute it?
Sharing together both happiness and sadness.

Your father died in 1978 twelve years after the family returned to India. Was his income sufficient to educate and support such a large family? Or did your mother also work? You were then 28. Did you also contribute to the family kitty?
Yes I did. From age 16 through the College, I worked and earned at every opportunity: Selling handicrafts, domestic consumables, welding gas for automobile workshops, worked at cinema snacks counters in the evenings and nights. My mother also worked.

I assume you must be married. However, there is no such indication in the book.
As you rightly pointed out, the book is not an autobiography. I am married with a son and a daughter. The son’s with the IT sector in customer service and relations while the daughter is a marine scientist.

Do you have any plans to write another book? If so will it be a fiction or non-fiction?
I am working on another book. I think it can be considered as an historical fiction as this book has been largely seen. 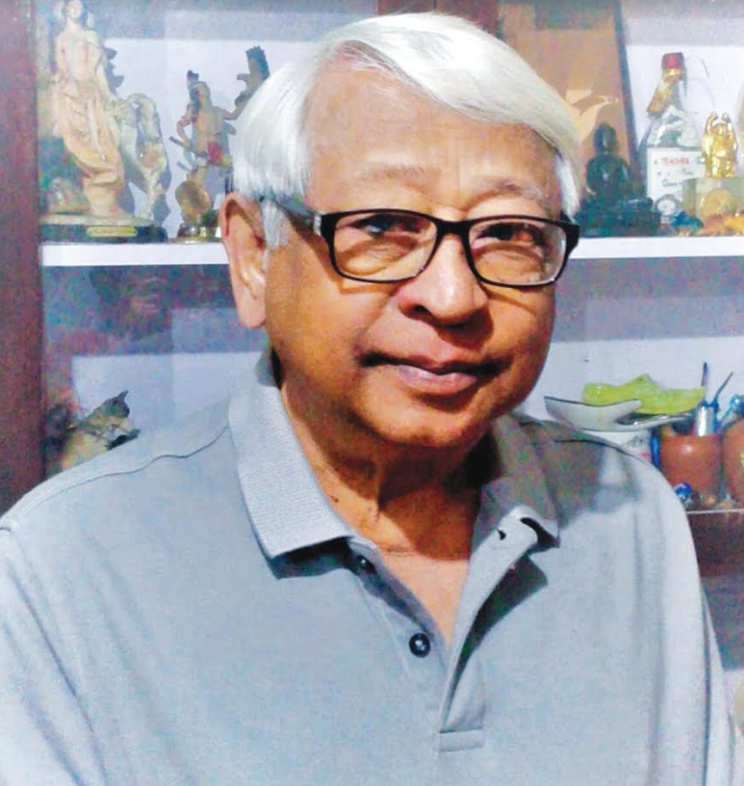