“One of the most terrifying sounds on earth,” Palestinian American historian Rashid Khalidi recalls, is “the screeching roar of supersonic warplanes diving to attack.”

He experienced that while rushing to retrieve his children from a kindergarten and a nursery school in Beirut during Israel’s 1982 invasion of Lebanon, which claimed the lives of more than 19,000 Lebanese and Palestinians, mostly civilians.

It is one of Khalidi’s many personal encounters with Israeli militarism told in The Hundred Years’ War on Palestine.

Unlike in his previous scholarly work, here Khalidi weaves his personal and family history into the period he covers. In a way it is lived history, a testament not only to what Palestinians experienced as a collective but also to what this meant in very immediate ways to the author himself.

Khalidi comes from a well-known Palestinian family that can be traced back for multiple generations, including a great-great-great grandfather who was a religious scholar, and two uncles who the British imprisoned during the 1936-1939 Arab Revolt.

Khalidi grew up in New York City where his father worked for the United Nations. After graduating from Yale University, he received his doctorate from the University of Oxford and went on to a distinguished teaching and research career, culminating with his present appointment as the Edward Said professor of modern Arab studies at Columbia University.

Khalidi’s 2013 book Brokers of Deceit: How the US Has Undermined Peace in the Middle East documents the role that successive US governments have played in the so-called Israeli-Palestinian peace process.

It demonstrates persuasively how the US was never an honest broker in negotiations but a behind-the-scenes lawyer for Israel, bound in part by a pledge dating from the Gerald Ford administration to never float a peace proposal without first seeking approval from Israeli negotiators.

This theme of US complicity in Palestinian oppression carries over into The Hundred Years’ War and is deepened with an account of the US role in Lebanon when American officials promised to ensure the safety of Palestinian refugees following the departure of the Palestine Liberation Organization. Those same officials reneged on the pledge as Israel oversaw the Phalangist massacres at the Sabra and Shatila refugee camps.

Khalidi concludes that US administrations have colluded with Israel ever since the 1967 War, which Washington green-lighted. The US continues to provide both the military aid and the diplomatic cover essential to preserving Israel as an apartheid, settler-colonial state.

As Khalidi demonstrates, all of the six wars the Zionist movement and the State of Israel carried out against the Palestinian people were enabled by colonial or imperialist powers.

Khalidi brings new research to the subject with chapters devoted to each of the six wars. His personal stories – such as his experiences living in Jerusalem during the first intifada and later serving as an adviser to the Palestinian negotiating team at the 1991 Madrid conference – make an already tragic history even more poignant.

Ending US collusion with Israel is the chief focus of the concluding chapter. Khalidi sets the stage for a discussion of possible solutions by first probing the failures of the Palestinian leadership.

He faults that leadership for dismissing the importance of influencing American public opinion as a way to counter US government actions. He contends that the Palestinian civil society call to boycott, divest from and sanction Israel has done more to win over the American people than anything the Palestinian political leadership has done.

Khalidi proposes three counternarratives to undermine the dominant belief among most US citizens that Israel is a normal, democratic nation state, like any other that espouses Western values.

The first counternarrative is one that draws comparisons between Israel and other settler-colonial societies, including Australia, Canada, South Africa and, of course, the United States.

Parallels between the fate of Native Americans and the Palestnians indict both Israel and the US. Khalidi concludes, however, that many Americans still cherish their early history in which settlers are portrayed as hardy pioneers in conflict with savages.

The dominant narrative is being increasingly challenged but still holds sway, he maintains. The “manifest destiny” claim that the pioneers used to justify the genocide and ethnic cleansing of Native Americans dovetails with the Christian Zionist myth of Jews at last returning to their ancestral land, an uplifting scenario of post-Holocaust rescue that appeals to many Americans.

The second proposed counternarrative is to highlight the asymmetry of power between Jewish Israelis and Palestinians. The problem with this is that Israel still enjoys being perceived as “David to the Arab/Muslim Goliath” and media tropes claim that Palestinians failed to take best offers at the negotiating table.

The third, and in Khalidi’s opinion, the most promising and important counternarrative, is to focus on equal rights and the lack thereof in apartheid Israel. Inequality was embedded in the 1947 United Nations partition plan which proposed a majority of the land of Palestine to the Jewish minority and is therefore at the root of the problem, he writes.

Focusing on inequality is crucial, Khalidi asserts, because it is in direct contradiction to the proclaimed egalitarian values of the Western democratic societies that Israel has relied on for support.

This inequality has become even more starkly apparent today and “is the central moral question posed by Zionism.”

Khalidi concludes: “By embracing its illiberal and discriminatory essence, modern Zionism is increasingly in contradiction with the ideals, particularly that of equality, on which Western democracies are based.”

It is instructive that at the age of 72, the prominent Palestinian American scholar sees the struggle against Zionist ideology as one of the keys to ending US collusion with Israel.

But it is difficult to see how this can be accomplished without a counternarrative that indicts the US for failing to come to terms with its own settler-colonial history, including its internal colonialism and its external imperialism, both of which persist to this day.

The Hundred Years’ War on Palestine: A History of Settler Colonialism and Resistance, 1917-2017by Rashid Khalidi, Metropolitan Books (2020)

Rod Such is a former editor for World Book and Encarta encyclopedias. He lives in Portland, Oregon, and is active with the Occupation-Free Portland campaign. ELECTRONIC INTIFADA 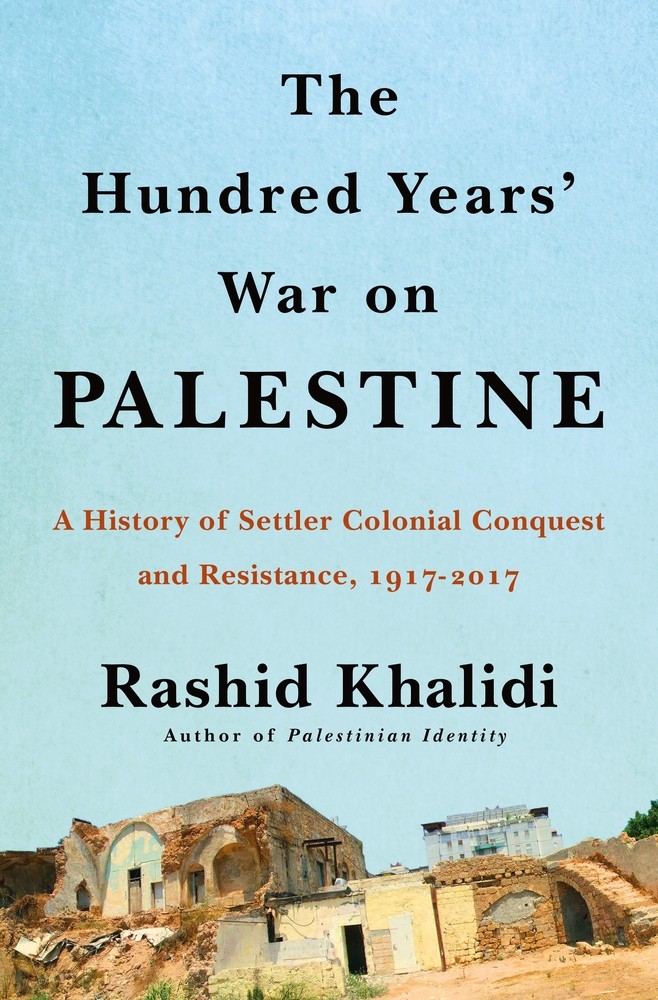