As the Emperor’s armies marched

Mandu by Malathi Ramachandran is a picturesque journey to the abandoned fortress on the Malwa plateau.

The landscape is lush here, north of the river Narmada, as the author escorts readers to magnificent Mandu, built from the 15th century into a vast complex of courtyards, palaces and lakes, to recreate the 450 year old romance between Roopmati and Baz Bahadur.

The 16th century love story of Roopmati, a peasant girl and Baz Bahadur, independent Sultan of Malwa is kept alive by locals in various versions. Now the romance is documented in English as well, for unfamiliar readers.

Mandu’s lavish landscape is roped in to add to the romance.

When Spring arrives in Malwa the Narmada bursts into dance, and the valley in song. Its meadows and forests are brushed with colours most vibrant. Up on the plateau in Mandu, the season tiptoes from terrace to terrace singing like the whispering of wind in the rains.

The ancestors of Baz Bahadur left him a sultanate stretching from the river Kali Sindh to the shores of the Narmada. This land between the Vindhyas and the Aravallis is fed by the river’s fertile soil. Its valleys are dense with forests rich in game, timber and honey.

In the mid 16th century, Baz Bahadur was badshah of this wondrous land. It was possible for him to have any woman he wanted. He already had many, as he drifted daily from one desirable woman to another taking them all to bed, but none to heart. Then he finds Roopmati, a young girl with the voice of an angel.

It was her voice that first made a home in his heart. As he canters around his kingdom along the grassy banks of the river one monsoon day, he pauses to wonder if that was a song he just heard, or only the sound of rain falling on the leaves above him. Or was it the wind sighing again?

Baz Bahadur lingers on, listening to the bits and pieces of a melody brought by the laden breeze. The air is fragrant with chameli as he follows the voice, till he is standing before the leafy canopy of a large tree.

He found the singer sitting there, her face lifted towards the river as she tried to weave the tones of raag Malhar into melody. When she moved to the main raag, Baz Bahadur joined her in singing. As their voice rose and fell, his eyes never left her face, and her eyes did not open.

Afterwards Baz Bahadur is loath to leave the singer behind. He asks her to come with him to his palace. She declines, saying she will not survive away from Narmada. The river is her mother, the source of her song, and without its daily darshan she will surely perish.

Eventually she tells him her name. He realises that Roopmati is a child of nature. She likes the colours of the earth: soft greens, warm browns and brick reds. Mellow mustard and burnt orange.

No man-made perfumes for her, as she bathed herself in the scent of wet red mud, in grass cropped by cattle and in the scent of the river, thundering on its way to eternity.

‘Sweet smells do not fill my senses. My mind and heart must be empty for the muse. For when the notes and beats pulse through the self, for everything else, there will be little use,’ recites Roopmati, who is also a poet.

Roopmati does travel to Baz Bahadur’s palace in Mandu with the promise that she will get to see the mother river every day. She accepts that she has been caged, but for her art and not for her body. Baz Bahadur treats her with such respect that she is inspired to explode into verse:

Voice of an angel, showering your favours on me as the tree showers her petals down. Your song has shrouded all my griefs, and buried them, covered with flowers.

The relationship between Roopmati and Baz Bahadur blossoms leisurely from partners in song to lovers. Above his hawa mahal, Baz Bahadur builds a pavilion from where Roopmati can see her beloved river every day.

The restless Baz Bahadur was finally at peace with himself.

Then the Mughal army marched upon his territory to claim Malwa, the last kingdom independent of the Mughal Emperor.

Akbar is determined to get Malwa, not because he desires the beautiful Roopmati, but because it is the road leading to the Deccan and the rich ports of Gujarat. Malwa is at the crossroads, central to the trade route since ancient times. It has been part of every military campaign, sought by empire builders since the mighty Maurya.

After Baz Bahadur is defeated in battle, Roopmati has no wish to be alive. She kills herself before Adham Khan, the dreaded general of Akbar’s army takes over Malwa.

Mandu is published by Niyogi, 2020 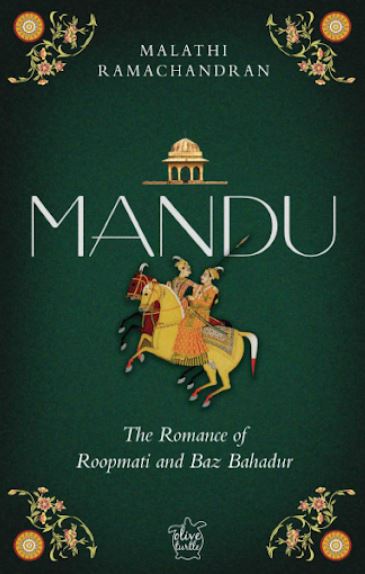