'Tipu Sultan, the Legendary Warrior, Was Not Communal'

COLOMBO: Friday November 20, 2020 was the 270 th birth anniversary of Tipu Sultan, South India’s greatest anti-British ruler and military leader who died fighting the British in Srirangapatnam on May 4, 1799.

Today, if there is an aversion for him in his native Mysore and Karnataka and also much of Hindu North India, it is because of motivated propaganda by British chroniclers and historians – a dark portrayal which has survived and is today grist for the ignorant and prejudiced mill.

From 2016 till 2018, the Congress government in Karnataka celebrated Tipu Jayanti with a grand procession on November 10 every year. But the opposition Bharatiya Janata Party (BJP), which saw Tipu Sultan as a “tyrannical, anti-Hindu ruler”, abandoned the observance in 2019 after it came to power under B.S.Yeddyurappa.

The opposition Congress led by Siddharamaiah defended the legendary warrior describing him as being both a non-communal and a development-oriented ruler. But this fell on deaf ears.

That Tipu was not communal and had been an administrative innovator was clearly brought out by his biographer Prof. Mohibbul Hasan (History of Tipu Sultan published in 1951). Hasan, who taught history in Calcutta and Jamia Millia Universities, says that Tipu Sultan ought to be appreciated for turning his vast domain into the most prosperous princely state in 18 th Century, when chaos prevailed in much of Central and North India.

If Tipu is viewed by a section of Hindus in a negative light it is because of British propaganda, Hasan insists.

W.Kirkpatrick, in his 1811 publication Select Letters of Tippoo Sultan, describes Tipu as an “intolerant bigot and a furious fanatic” who indulged in forcible conversions, mass circumcisions, destruction of temples and confiscation of temple lands.

Kirkpatric’s views were later echoed by M.Wilks (1864), and H.H.Dodwell in his Cambridge History of India (1929). According to Hasan, if the British chroniclers painted Tipu in dark colors it was because he had refused to pay tribute; tried to set the Nizam of Hyderabad and the Marathas against them; and sought an alliance with their European rivals, the French.

That Tipu was non-communal is evident in the fact that a number of top officials in his government were Hindus. Purnaiya was the Mir Asaf (in charge of Revenue and Finance). Krishna Rao was his Treasurer. Shamaiya Iyengar was Minister of Police and Postal department. Subba Rao was his chief Peshkar (Chief Secretary). Srinivas Rao and Appaji Ram were his close confidantes. His agents in the Moghul court in Delhi were Mool Chand and Sujan Rai.

The Faujdar of Coorg was Nagappayya, a Brahmin. The Asafs (revenue officers) at Coimbatore and Palghat were Brahmins. The chief of Tipu’s irregular cavalry was Hari Singh. Rama Rao and Sivaji, a Maratha, commanded his regular cavalry. Tipu sent one of his Hindu Generals, Sripat Rao, to quell the Nair rebellion in Malabar.

In 1791, the monastery was raided and pillaged by a Maratha chieftain, Raghunath Rao Patwardan, and the Sankaracharya had asked Tipu for help to restore it. Deeply grieved, Tipu Sultan wrote back saying: “ People who have sinned against such a holy place are sure to suffer the consequences of their misdeeds at no distant date” and asked his officials to send cash and grains so that the idol of Goddess Sarada could be consecrated.

He also donated a palanquin to the Sankaracharya and requested him to pray for the prosperity of his domain.

Tipu had contributed to the Lakshmikanta temple at Kalale in Nanjangud taluk; the Narayanaswami temple at Melkote; the Srikanteshwara temple at Nanjangud and to the Ranganathaswamy temple at Srirangapatna all in Karnataka. The greenish shivalinga at the Nanjundeshwara temple is known as Padsha linga because it was donated by Tipu, the “ruler”.

According to a Sanad, Tipu “ordered” the continuation of worship at the Thirupathi Venkatachalapathi temple. Biographer Hasan wonders if Tipu would have allowed the Ranganatha, Narasimha and Gangadhareswara temples to function in the Srirangapatnam fort if he was an Islamic bigot. Tipu was an ardent believer in astrology and consulted astrologers daily, first thing in the morning.

Tipu is widely accused of indulging in forcible conversions in Kerala and Coorg. But according to Hasan, Tipu told his French General, Cossigny, that he ordered the forcible conversion of Nairs and Coorgis because these communities had staged rebellions repeatedly. It was reported that 70,000 were converted in Coorg, but this could not be true because the total population of Coorg was not that much, Hasan points out. According to Punganuri Ramachandra Rao in his Memoirs of Hyder and Tippoo (1849) only 500 were converted in Coorg.

Hasan admits that Catholics in Kanara were converted forcibly, but this was because they had helped the British defeat Tipu Sultan at Mangalore. But Tipu never tried to convert loyal subjects.

Hasan says that Tipu gave Mysore a progressive administration. He points out that J.Mill in his History of British India (1848), acknowledged that as a ruler, Tipu sustained an “advantageous comparison with the greatest princes of the East.” Tipu’s country was “ the best cultivated and the most flourishing in India,” Mill adds.

Tipu rationalized the administrative system; got rid of private middlemen; encouraged local industries; sought French industrial technology and tried to send one of his sons to France for a modern education. He set up a rocket regiment in his army. After his defeat in 1799, the British shipped these weapons to Britain to replicate them through reverse engineering. Tipu was a believer in international trade and sent trade delegations to Afghanistan, Iran, Turkey and Myanmar. He also built the first road network in Malabar in Kerala. 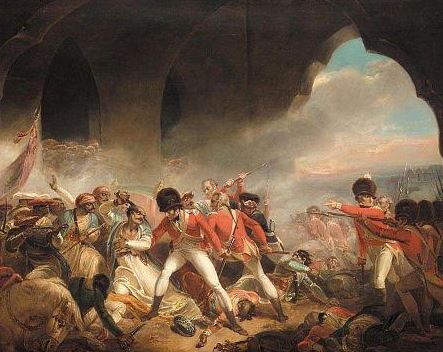