Lying dead for the last 203 years, the First Governor-General of Bengal Warren Hastings was recently catapulted to the news from history’s mortuary, for a very strange reason: the second impeachment of Donald John Trump.

During the proceedings, reference was made to the historic impeachment trial of Hastings, which began in the House of Commons in London in 1788 and went on till 1795. It figured in the House of Lords as well.

Just a few months into his trial, the French Revolution took place in 1789 to shake all Europe and America. But the impeachment proceedings continued. Hastings was lucky as he was exonerated. But not Trump.

Anyway, the impeachment of Trump in this context is a different issue. The real issue is Hastings of India. Our matter here is Hastings’ misdeeds in Oudh, Benares, Burdwan, Calcutta and in other parts of Hindustan.

Incidentally, he fought duels also in Calcutta. In one such duel, he left Sir Philip Francis half dead. Sir Philip, a very high official in the Court of Directors of the East India Company in Calcutta, was Hastings’ rival. But after that duel, he left for London.

When Hastings returned to London, Sir Philip brought the charge of impeachment against him. He was supported in it by Edmund Burke.

Despite all the political troubles rising out of the French Revolution, a large number of British politicians, intellectuals and writers including Jane Austen keenly followed the trial. Austen’s family knew Hastings very well.

Here we find that legal matters may be very old but their relevance continues. Or Hastings’ 1788 impeachment would not have formed a matter of legality in 2021 in Trump’s case.

It is not very often that the USA quotes from the history of Great Britain on its internal matters. Yet Hastings figured. What did he actually do in India that prompted the House of Commons to bring an impeachment motion against him?

Well! One can speak volumes about Hastings’ misdeeds in India during his tenure from 1772 to ’85. Records of the trial proceedings in the House of Lords say he committed “High Crimes and Misdemeanours”.

In fact, this impeachment case would have taken further tricky twists had the French Revolution not broken out. This revolution embroiled Great Britain, all Europe, the East India Company, India and the colonised Americas. Hence, people’s attention was diverted.

Hastings, after having amassed mammoth wealth through ill means in India, spent a very hefty £70,000 to fight the case, that he ultimately won.

Imagine how much Hastings spent in today’s money? In 2021 the amount stands at £6.5 million. Here the gravity of Hastings’s charges comes in very glaringly, otherwise he would not have spent such a sum.

The impeachment proceedings were watched keenly. Famous parliamentarians like Edmund Burke strongly opposed Hastings and his misdeeds in Colony India.

We know Hastings was one of the most hated Firangis in the Hindi belt of Hindustan. Hence, the fun-loving people of this region made a unique lyric on him:

Saddle the horses and call the mahout
Ey Warren Hastings, get the hell out

The impeachment charges against him were many but primary among them were torturing two Begums of Oudh for money, injustice to Raja Chait Singh of Benares (old spelling), hanging Maharaja Nanda Kumar, and injustice to the Rani of Burdwan and Rani Bhavani.

The issue shook the British in England and Burke fiercely attacked Hastings supported by Sir Philip Francis. It became more so as Hastings had tortured several Begums and Ranis to extract money from them.

Among the Governors-General of the East India Company, money corruption was there, but in the case of Hastings he could go to any extent to get money illegally. And that is why the two most powerful and richest Begums of the ruling house of Oudh – Nawab Begum and Bahu Begum – became targets.

In the proceedings against Hastings, they were referred to as “Begums of Oudh” in the House of Commons.

In the Battle of Buxar of 1764 (near Patna), Nawab Shuja-ud-Daula was defeated by the East India Company which brought Oudh under Kampani rule. Hastings was constantly pressuring him for money but he had none.

On the other hand his mother and wife had immense wealth, but they were unwilling to give Hastings even a farthing.

Nawab Begum, mother of Shuja-ud-Daula, was extremely cash rich and believed to have at least 90 millions of rupees with her in cash and ornaments.

His wife Bahu Begum, on the other hand, had cash worth 40 million.

Hastings sent his troops to Faizabad, the capital of Oudh, to imprison them. They were tortured brutally hto divulge where they had kept the money. Even their close servants were also put to extreme physical pressures to reveal the treasure. Ultimately, Hastings looted their money and kept a sizeable part of it.

Coming to the Queen of Burdwan, we find that Hastings appointed an extremely corrupt man, Brajkishore, as guardian or regent of her minor son. Earlier, the queen was the guardian. But she was replaced by Brajokishore.

In 1774 the Rani of Burdwan lodged a complaint against this with the Council of the East India Company. Brajkishore, who was swindling money from the state’s coffers, was forced to give an account though Hastings stiffly opposed it.

Brajkishore’s account statement submitted to the Council showed he had given 50,000rs to Hastings and another 5,000 to Kanailal Baboo, Hastings’ native secretary.

The third case of torturing women relates to Rani Bhabani, widow of the Zamindar of Rajshahi (now in Bangladesh). A pious lady, Rani Bhabani could not pay tax to the East India Company as the peasantry had lost all their standing crops in the massive floods of 1773. It was also the time of the Great Bengal Famine that was allowed to last five years.

Instead of helping her, Hastings surrounded the palace of Rani Bhabani and forced her to pay cash of 22,58,674 rupees and also had her Zamindary snatched. Rani complained to the East India Company Council in Calcutta.

The Council restored her Zamindari, despite very strong opposition from Hastings. He had appointed Dulal Roy as head of the Zamindari after getting huge cash as bribe. In 1775 the Rajshahi Zamindari was restored to the Rani and Dulal Roy removed from his power.

The case of Maharaja Nanda Kumar continues to remain a subject of legal study, discussions, arguments and even detailed debate among law students in India, England and the USA. This is perhaps the cruellest of Hastings’ many cruel deeds.

Nanda Kumar brought the charge of embezzlement of East India Company coffers by Hastings at the Council. He charged him with having taken a bribe of 350,000rs from the widow of Mir Zafar, ex-Nawab of Bengal who had replaced Shiraj-ud-Daula.

Muni Begum, widow of Mir Jafar, was practically forced to dish out this money to him. On Nanda Kumar’s complaint, the issue came up before the Council which ordered an enquiry. But Hastings dissolved the Council to prevent it from happening.

If Hastings was subjected to impeachment charges, it was fully justified and his treatment of Raja Chait Singh of Benares proves it. The Kingdom of Benares was under Oudh when in 1775 a treaty was signed between Oudh Nawab Asaf-ud-daulah and the East India Company.

Under this Treaty, Benares was transferred to the Company and the Raja was simply obliged to pay it an annual tribute, nothing else. Hastings, however, demanded 500,000 cash from Raja Chait Singh which was totally unjustified. Naturally, the Raja opposed it. But due to tremendous pressures he ultimately had to pay in 1778.

The very next year, Hastings again demanded money and when Raja Chait Singh refused, he was imposed a fine £2000. He had no option but to pay the fine, as well as other money demanded by Hastings.

Again in 1780, Hastings demanded and the Raja paid 200,000 rupees. Hastings kept this money personally. Shortly afterwards, he again demanded 500,000rs as annual tribute and an additional 2,000 horsemen for the use of the Company.

His greed for money created such a flutter in Great Britain in the early 19th century that even cartoons were created showing the money he was extracting in India. He was dubbed a person keen on Political Banditti. 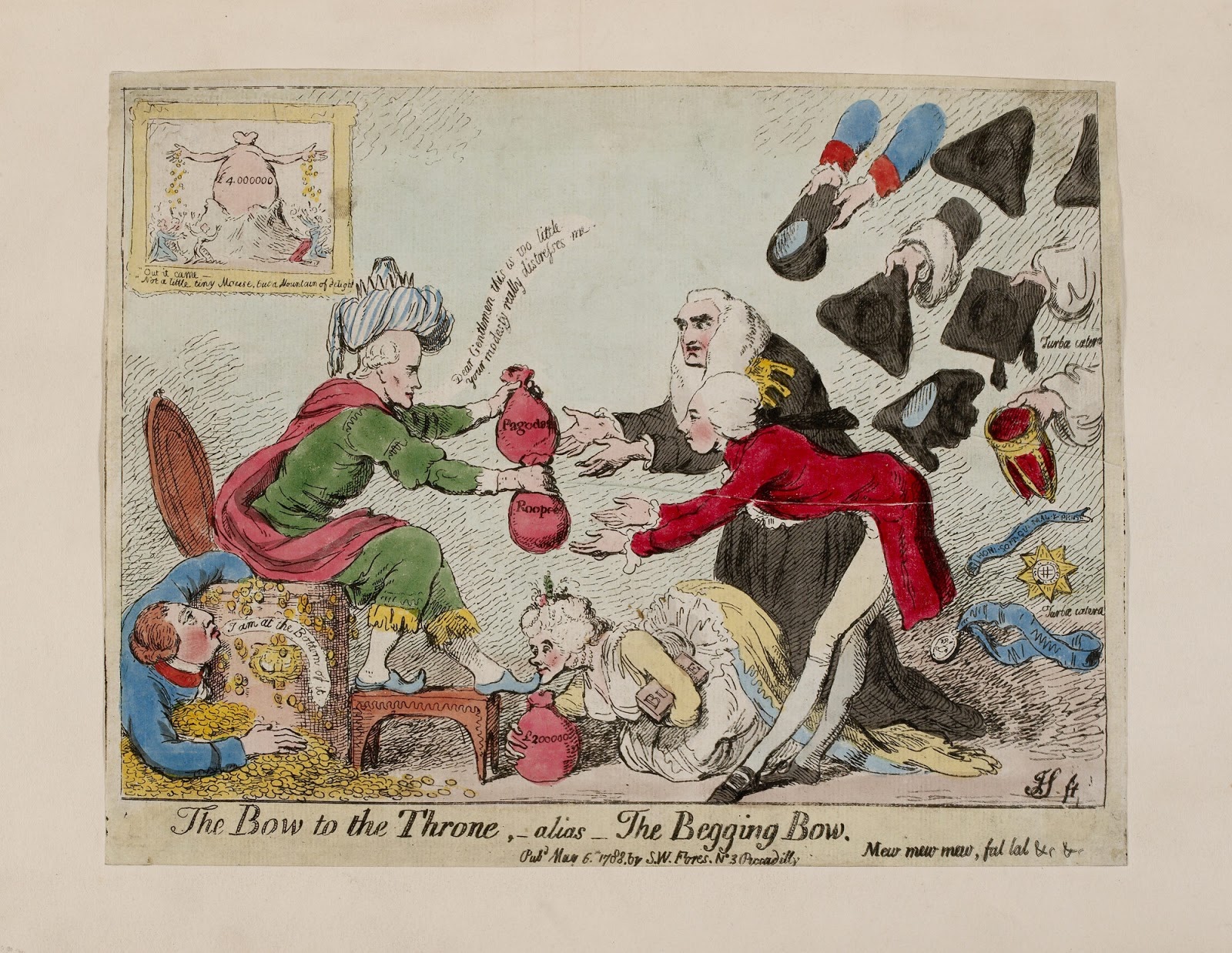 At the time, James Gillary was the topmost cartoonist of England. Braving libel and defamation suits, he created a large number of cartoons on Hastings and his Political Banditti in India. Some of these cartoons are still preserved in the British Library.

Eventually, Hastings personally came to Benares to snatch Chait Singh’s kingdom. After surrounding his fort, Hastings wanted to arrest the Raja but he escaped.

Well, if these were not grounds enough to impeach Hastings of India, what more reasons were needed? 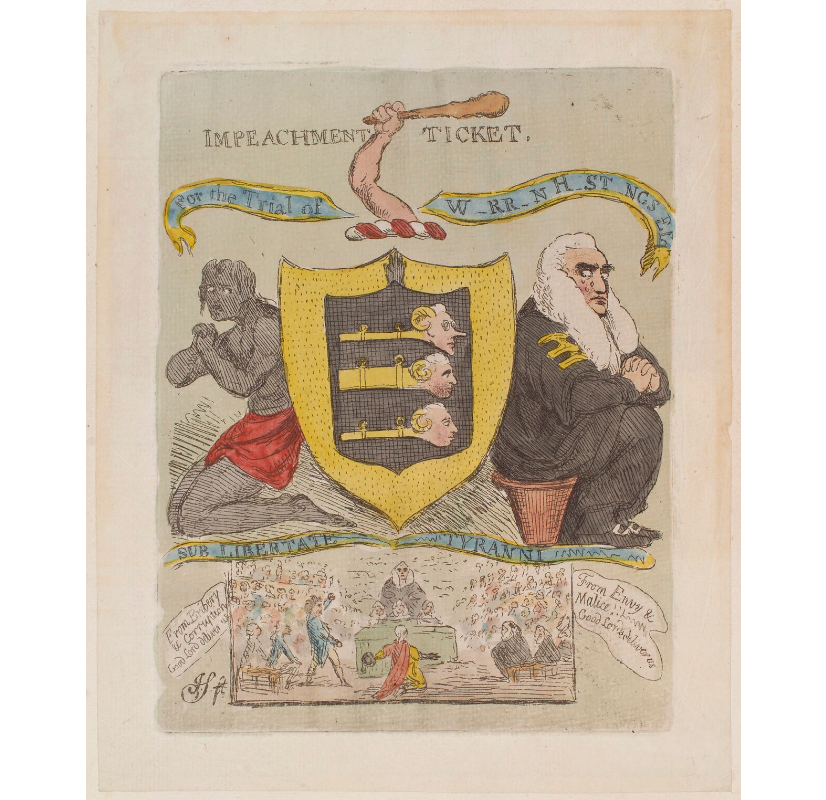