Jogishwar Singh ( IAS 1976 ) is the bureaucrat who literally came in from the cold- from his almost ten thousand feet high perch as Deputy Commissioner of Kinnaur to the pleasant cantons of Switzerland. He is also a most unusual civil servant, probably the only one who was selected twice for the IAS, rejected it outright the first time and resigned it the second time after eight years' service for a greater love. The fact that he hails from redoubtable Punjab must have had something to do with it, because I certainly can't see someone from U.P. or Tamil Nadu doing this !

His book is a delight to read- anecdotal, honest, impish and at times outrageous in his comments ( such as the one about the ladies of Kinnaur: " I could smell her from a distance since local people are not known to bathe very often." ). But his love and fascination for this most remote and beautiful of Himachal's districts comes through strongly, as does his passion for Lia, the Swiss girl who carried him off to Switzerland in 1984.

This book is, therefore, essentially an account of these two romances ( with some "sexual gymnastics" with an Italian Mona Lisa thrown in to establish his Punjabi credentials).

Jogishwar recounts his posting as Deputy Commissioner of Kinnaur in 1982, his service there for two years before resigning: how he falls in love with a visiting Swiss tourist who fully reciprocated his ardour. After their marriage he moved to Switzerland where he did a doctorate from Heidelberg University ( on alternate credit systems in Kinnaur), tried to join the UN but failed because he lacked the necessary "connections", went on to banking for reasons he has not fully explained in the book.

He had a very successful career as a banker and finally hung up his boots ( including the banker's pin-striped three piece suit, presumably) in 2018. He is now a free-lance consultant, and I shudder to imagine what kind of advice he gives his clients, if this book is anything to go by!)

The book honestly reveals his fascination for the powers and authority of a Deputy Commissioner in a remote region, and Jogishwar exercises them to the hilt, with scant regard for the Conduct Rules or simple prudence- all in the public interest, of course !

When an obdurate Finance Deptt. will not sanction him an official car, he withdraws cash from the Treasury, goes to Chandigarh and helps himself to the latest model ( The Ambassador and I ).

When a smoker on a road blows smoke in his face he is hauled to a police station to be taught proper civic behaviour ( Gone with the Smoke).

A butcher who sells rotten meat is made to publicly eat it, raw and with the maggots and worms, rather than just pay an ineffective fine ( Don't Cheat on Meat). Jogishwar has his own ways of dispensing justice, without reference to the IPC or the CrPC.

He has little patience for hide-bound rules or notions of Victorian propriety. He brings in lady visitors to the restricted area of Kinnaur without the prohibitive Inner Line Permit because he cannot abide the red tape ( Mona Lisa in Kinnaur), relying on the "lese majesty" effect of the DC's flag. He smuggles Lia into his room in a training institute as his wife ( Hyderabadi Masala) leaving his colleagues to stew in the juice of their curiosity.

He insists on deploying a police pilot car in advance of his official vehicle ( against the rules, naturally), and is overjoyed when an overbearing Brigadier is tricked into saluting him ( The General's Salute).

But on at least one occasion the young DC is caught on the backfoot: on a night halt in a remote place in Nichar the local Pradhan gifts him a young Kinnauri girl for the night (The Pradhan's Gift in Nichar),apparently a local custom to express hospitality. But it was too much for even Jogishwar who sends her away, much against the run of play.

It's not all fun and games in Kinnaur, however. Jogishwar takes his job and responsibilities seriously. He has visited every remote village in his district, sometimes trekking as much as sixty kms to reach the more inaccessible ones, like Hango, Chuling, and Namgya. On one occasion, on an April visit to Chitkul, the last village in the Sangla valley, he remarked on the beauty of the place. The local Pradhan had a differing view, informing the young DC that it was completely snow bound in the winters and no official or tourist visited them then.

Jogishwar promised the Pradhan that he would come and spend New Year's eve at Chitkul that year. And he kept his word, much against the advice of his staff and Tehsildars, tramping for eight hours over waist deep snow, only to find that the Pradhan himself had betaken himself to Shimla for the winters! He has studied, and worked on, alternate credit systems in Kinnaur and conducted a national Census even though all govt. employees were on strike.

He is also an environmentalist at heart: he opposed any plans for mass tourism in his district, arguing that the fragile topography and unique culture of Kinnaur would be seriously endangered by hordes of visitors and vehicles. This brought him into some conflict with the local MLA and Speaker of the Assembly, the legendary T.S.Negi, who, however, deferred to his DC's views and did not force his own on him. Subsequent events have proved how right Jogishwar was in opposing over-tourism. Incidentally, the author devotes a whole chapter to Mr. Negi, indicative of his high regard for the bureaucrat turned politician.

The pre-ordained, three year, Inner Line Permit romance with Lia is true to the character of the man, not exactly love at first sight but love in hind-sight. It took Lia a midnight walk to the thick-headed DC's residence for Jogishwar to realise that this was the girl he wanted to marry. His mother was not too happy, he confesses. When she was looking for a bride for him he had insisted that any prospective candidate must tick four important boxes, the fourth being ( in his own words): she must be large breasted. We are informed that Lia did not tick the first three boxes, about the fourth he remains reticent!

I finished this book in two sittings. Unlike most of his ilk who too have penned their memoirs, Jogishwar does not preach or pontificate.

He shares with the reader the joy of being a young DC in a unique place, the satisfaction of cocking a snook at the staid bureaucracy of which he too is a part, the miracle of how a chance encounter metamorphosed into a love that changed the whole trajectory of his life. It is precisely these qualities that make this book so readable, especially for those who have served in Himachal.

His has been a most unusual life and this book makes for very interesting reading for Jogishwar does not pull his punches. It's probably a good thing he decided to quit the strait-jacketed ranks of the IAS, for one can't help feeling that had he continued in the service he would have either become a Chief Secretary or would have been charge-sheeted for his out-of-the-box nature. There is no middle ground for this raconteur! 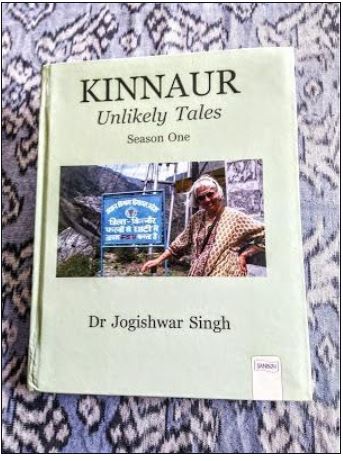