The country is celebrating the centenary of one of the greatest filmmakers in the world – Satyajit Ray. Publishers are vying with each other to bring out books on Ray. Online seminars, conferences and discussions have been planned around Ray and his films throughout the year.

Among these, perhaps the first to hit the market is Penguin Random House India’s Satyajit Ray in 100 Anecdotes co-authored by two renowned writers for children, Arthy Muthanna Singh and Mamta Mainy. Actor Dhritiman Chatterjee who made his debut as the protagonist in Ray’s Pratidwandi (The Adversary) release in 1970, has written a brilliant foreword to the book.

“It is so very appropriate then, that his birth centenary should be commemorated with a book that brings 100 incidents and anecdotes from his rich and varied life to readers in crisp, lively, finely illustrated accounts. On the face of it, the anecdotes may appear random but, taken together, they provide a kind of overview to the life of a fascinating man,” he writes.

In an outstanding foreword to the book, the authors state: “A master film-maker, a remarkable auteur, a writer par excellence and an artist with an immense reach and range, Ray flitted from form to form with boundless ease and his diverse talent coalesced to produce works that could be distinguished by a rare sympathy and compassion, a deep humanism that finds resonance with people across generations, aesthetic tastes and interests.”

The book has dived into a lot of research to dig out exactly 100 little-known anecdotes from Ray’s life as filmmaker, writer, illustrator and translator and more importantly as a very good human being, husband and father. Some of these anecdotes most readers from West Bengal will identify with as they have been written about frequently by critics and scholars of Ray and his films. But in English, they certainly guarantee a wider reach.

We learn that Ray was the only son of a single mother as his father died of a debilitating illness when he was around two. Among the few faint memories Ray cherished of his father, one recounted here says how thrilled he was when the family had gone to Sodepur for his father’s health problems and his father, engaged in a painting, pointed out to him a steamer passing by which was Ray’s first sighting of a ship.

The house they were living in was alongside the Ganges and the flowing water of the river must have had a deep influence in the little boy’s mind which reflected in his frequent use of rivers, waters, ponds, lakes, puddles and rain in many of his films from Pather Panchali through Aparajito to Teen Kanya (Samapti and Monihara) to most of his films set in the rural milieu of Bengal.

Another similar memory to do with water is also rooted deeply in early childhood when the family was vacationing in Giridih which is now in Jharkhand and his father was ill. The servant, Prayag, told him that if he dug deep into the sand along the banks of the river Usri, he was sure to get water. He took a wooden spade and began to dig and soon found water rising in the hole. But the little boy got angry when a village girl came and washed her hands in this water because he insisted that it was he who had found the water!

Ray had never met his grandfather Upendra Kishore Roy Choudhury, a famous writer, painter, publisher, editor who went to London to learn printing technology and came back to edit a children’s magazine Sandesh. Upendra Kishore passed away five-and-a-half years before Ray was born. But he left many objects that became memorable events in the child Ray’s life.

One of them was Ray’s discovery of a wooden box filled with paints, brushes and bottles of linseed oil. The little boy Manik used up all its contents to create drawings and paintings, planting the seed that grew into one of the most talents artists India has known.

His mother Suprabha Ray was perhaps the first big influence on his life and growth. It must have been very difficult as she was a widow and a single mother and had limited means of survival which she managed through her skills and command over Kashmiri embroidery, and music and we are informed that she was so good at vocal music that she recorded a song with HMV in Calcutta.

She had also sculpted a lovely bust of Gautam Buddha “which later occupied pride of place in Satyajit Ray’s home.” Many believe that some reflections of his mother have come out in Aparajito which shows the mother Sarbajaya stitching and knitting who finally dies of loneliness hoping that her son will come visiting.

The authors recount how “She would read out stories by Arthur Conan Doyle to him in English and then translate them into Bengali – to make it easier for the young boy to understand. Every year, she would take Ray to Whiteway Laidlaw % Co – one of the poshest departmental stories in Calcutta during the British rule in India – to buy him crackers for Kali Pooja. Ray and his mother shared a very special bond.”

The book practically spills over the anecdotes picked out of the life of a great man which will fascinate and educate all Ray lovers across the world of which there are legions.

One such explains how the Ray family was friends with the great scientist Sir Jagadish Chandra Bose. The small zoo that Bose had in his home, he has used in one of his famous Feluda mysteries later made into a film called Badshahi Angti (2014) by his son Sandip. Ray slightly changed the detailing of the zoo in his original novel.

Bonobihari Sarkar, a strange man, Bonobihari babu has ferocious and poisonous creatures like crocodile, African tiger, hyena, rattlesnake, scorpion and black widow spider in his home but this gave the film a completely different appeal.

The cover illustration and design are by Aniruddha Mukherjee and the line drawings in the slim book is filled with are inspired by Ray’s personal life and from his films. If one carries the logo of one of the earliest issues of Sandesh designed by Ray himself, another carries the sketch of a pastry as the text explains Ray’s fondness for certain kinds of snacks ranging from chana chur to pastry.

The choice of sketches are random and can be anything and everything from Charu’s opera glasses to an ancient gramophone which we saw featured in Ray’s Teen Kanya. There is a tiny film reel printed in one corner of every page in this unputdownable piece of work.

The only demerit of the book this reviewer would love to point out is the entire book being done in a shade of green with the fonts printed in white does not lead to a very friendly reading. If the publishers made it to make it look “different” it has not worked well with this reader. The price pegged at Rs.299 too may be a bit too heavy on many pockets.

But all said and done, this book will in course of time, turn into a collector’s item. 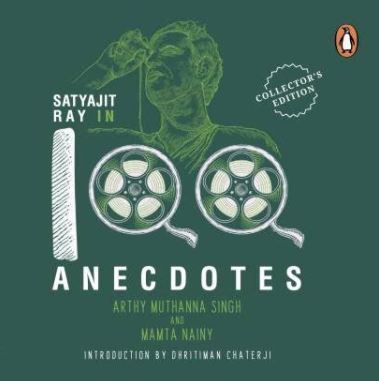