'Empathy is Missing': The Abled-Only Workplace in India

Dr Mahrukh Zaidi was born unable to hear. Her condition was only diagnosed at the age of one. “My parents couldn’t make out I was hard of hearing because it's not a visible disability,” she explains.

Zaidi underwent surgery for a cochlear implant to enable aural interactions in her everyday life.

Because of her disability, she never considered taking up medicine. But “a teacher told me that I can do it. I also wanted to increase the representation of disabled people in the medical community. I wanted to make it more inclusive. That’s why I became a doctor.”

“But the medical community is not disabled friendly,” adds Zaidi. “In medical school, I would get tired of explaining to people about disability. They would have so many questions. But I did not want to justify my problem to people.”

Another issue that individuals with hearing disability face is called “listening fatigue,” that comes with hours of socialising, the doctor explains.

“We have a limit as to how much hearing we can take in a day. After a while you get tired and go into isolation. You need time to recharge.”

According to Zaidi, there is also a myth that children with impaired hearing should only learn one language so they don’t get confused. “My parents only brought me up teaching English and no other language, so I had trouble in medical school when professors and peers would speak in Hindi”.

Dictations in lectures were also a problem for Zaidi. “The professors would not repeat any of the words while dictating notes, and I would pretend to write so I don’t get into trouble but I had to copy everything that I had missed,” she recalls.

“In addition to that, body sounds such as heart sounds and bowel sounds are very soft and hard to interpret. You have to train yourself as a doctor into understanding what is a normal or abnormal sound,” Zaidi tells The Citizen. “I had an issue with analogue stethoscopes. I could not use it, I had a big problem finding an electronic stethoscope. They are very expensive and need to be maintained.”

As a doctor she also finds it hard sometimes to follow her patients’ problems. “Sometimes people speak in Hindi, with different dialects and that’s hard to register. Especially with Covid19, when someone speaks behind a mask it is difficult to make out what they are saying.”

So in order to feel more confident, Zaidi started practising with her grandmother the conversations she would have with her patients.

“I am good at one-on-one conversations, but in a group of 3-4 people it is hard for me to listen and follow the conversation,” she explains.

“And if you ask people to repeat what they have said, they just say ‘never mind.’ This never mind is a very irritating word for us.”

“You don’t need a fancy tool to include us, you just need empathy. Empathy is missing in the medical circle.”

The Rights of Persons with Disabilities Act which came into force in 2017 defines disability as an “evolving and dynamic concept” and includes physical, mental, intellectual and other “multiple disabilities”. The Act applies to public as well as private establishments, and requires them to frame and publish an Equal Opportunities Policy.

All forms of discrimination against persons with disabilities are prohibited under the Act. However, there is no clarity with respect to its implementation, grievance redressal mechanism, or training for persons with disabilities (PwD). The act also fails to recognise the family as an essential asset in the management of mental health of PwD, according to Mallikarjuna Iytha, founder and CEO of the Inclusive Divyangjan Entrepreneur Association and president of the Fair Trade Forum India.

“The Act is also silent on the implementation of the provisions mentioned, nor does it cater to the support system being built in the country. Also, mental health disabilities like intellectual disabilities, specific learning disabilities and autism spectrum disorders are clubbed together, creating confusion,” says Iytha.

An assessment by the Human Rights law Network corroborates this, saying that in India:

“Disability is a reason for discrimination and denial of reasonable accommodation, there is lack of education opportunities both at the primary and higher levels, a lack of skill development interfaced with market requirements, employment and livelihood opportunities, discrimination in promotions and emoluments, a lack of access in the built infrastructure, transport sector, services and products, communication and documentation, the denial of access to most civil and political rights, and a specific marginalisation and discrimination faced by women with disabilities.”

23 year old photographer Vani Singh was diagnosed with ADHD in her final year of Delhi University, while she was doing her undergraduation.

“Research and academics has been a huge problem for me,” she says. “When I read something, I get stuck on one word and feel like I need to know more about that one particular word.. I never go back to the original point and go back to the research.

“Even numbers and digits become very challenging to deal with,” says Vani. In her first internship with Amazon, she got confused between all the digits in a meeting and said them out wrong.

In another instance, Vani could not write her JNU entrance exam. “I was standing outside the exam hall in complete paralysis but I just couldn’t go in,” she recalls. “It's all blank. You start questioning the purpose of it. You think it is just going to be like undergraduation all over again.”

Vani says that because of ADHD she also loses focus and gets distracted. “Especially in conversations, I might be talking to you but my thoughts are going to my dog,” she explains.

As a photographer, it is also very difficult for Vaani to move from one assignment to another. “I hyper-fixate on one story and struggle to move on.. The same thing happens in my personal relationship,” she shares.

The main issue, according to Vani, is that “people in professional circles do not believe that ADHD is real.. There is also a lack of awareness.”

She says it is difficult to help people understand “that I am just in bed, that I am in a state of paralysis.. When it is all about chasing deadlines, mental health does not get priority.”

“If I have to take a leave for my mental health, I should not have to lie about it,” says Vani, so for people with ADHD, there also need to be people in an office space you can talk to. “Mental health in offices has to be accommodated.”

When choosing a job, she says, “I also don’t join organisations where I know they won’t be accommodative of my disability.”

For 26 year old Akash, diagnosed with minor dyslexia as a child, their condition was not something to share with their first employer, a small newsroom in India. “I did not know what it would mean to tell your employer that journalism is not meant for me. Working with words at a very high pace is not something individuals with dyslexia are good at,” he explains.

During that time he faced a lot of challenges. “I was working on a web desk so I was expected to do a lot of things very quickly. I used to make a lot of mistakes. I would confuse June with July, I used to confuse rankings of the stories on the website. It was very confusing for me. I used to use this extension called open dyslexic, which changes the font for every other website to make it easier for me.”

After facing these challenges for 3-4 months, he decided to tell them that the job wasn’t easy for him. “That's when things started going bad,” he said. “They stopped giving me certain tasks. Earlier I was being given some advanced tasks, and that stopped. I started to feel isolated and I didn’t know anyone else who was facing these issues.”

Tired and devastated, Akash finally decided to quit his job. He went on to join a much bigger and more formal newsroom than his previous one.

“This time I was much clearer about my disability,” he tells The Citizen. “The process of hiring in this organisation was much more formal. They asked me what my needs are. So it was easier to communicate.”

“Empathy goes a long way,” Akash added. “When there is communication, people around me will know that I am going through a challenge, so they can help me.”

He thinks organisations should discuss these issues openly and much more formally. His current organisation has a confidential system in place where he can talk about mental health. “If there is also something that I can’t do, I can openly tell my team and lean on them for support,” he says.

According to Mallikarjuna Iytha, employers need to ensure an inclusive selection process where people with disabilities are fairly selected and the provision of reservation implemented in the recruitment process.

“Once an individual with disability is recruited, their training period should be paid and the distance between training centers should be in close proximity to the PwD,” adds Iytha.

“There also needs to be a grievance redressal board in every institution for a person with disability and their complaints. Additionally, it is essential to have regular sensitisation workshops for the employers in every company to create a better environment for individuals with disability at workplaces.” 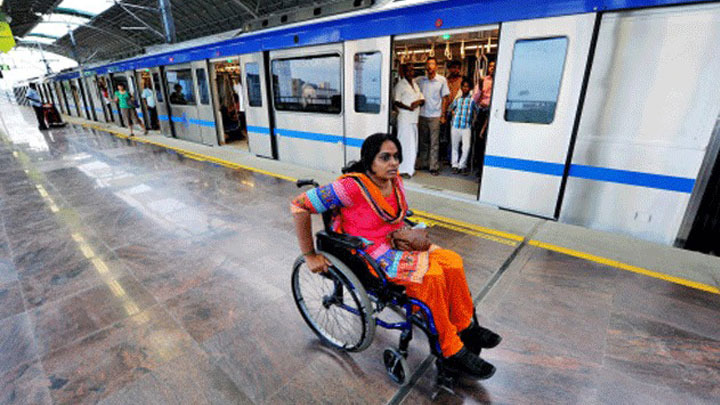