The majority of weavers in Varanasi are Muslims, and run their business as a cottage industry. A community that was once known to be among the wealthiest in town are now left struggling to make ends meet.

“I am the fourth generation in the family doing this job, but I don’t think it will go any further from here. The next generation feels that this job does not provide a viable future,” says Rizwan, 35 who has been doing the job of a handloom worker for the past 20 years.

“The younger generation says they would prefer selling shoes over this job. In other jobs, at least they know that they will get the right price for their product,” Rizwan explains.

It is not the pandemic alone that is responsible for their condition. As in much business, transactions here happen on a credit basis, hence demonetisation was the start of their losses back in 2016. Then GST came in that added taxes to the textile industry, which was not the case earlier. The pandemic was only a catalyst.

Most of these handloom workers have been compelled to leave the occupation entirely or shift to power looms. Some who are financially more stable now run both power looms and handlooms in order to sustain their family.

Firoz Ahmad, 26 used to work on sari embroidery but now runs a tea stall in Kashmiri ganj. “I was earning about 15,000 rupees a month while working for two different people. With the first lockdown, I lost both the jobs and was left unemployed. I am the sole earning member of my family - both my parents passed away a long time back, and I am the only family for my two younger sisters.”

As the lockdowns persisted, he continues, “I lost all my hopes of getting a job anywhere and with my savings exhausted, I had to start this tea stall. Not that it’s leaving me with a lot of money, but I don’t know what else to do. I just hope the market conditions improve with time and I get a job soon.”

According to data provided by the Varanasi Textile Industry Association, the industry lost about 24 crore rupees every day during the lockdown. Around six lakh people are directly or indirectly associated with the business and have incurred irreparable losses.

Atul Pandey, who has been working in this market for the past six years, highlights another problem: how the cultural significance of Banarsi sarees has diminished with time.

“Earlier, the buying capacity in the market was quite high and people appreciated the weaver for the way every bit of the sari was carved. This came down with time as the demand for these sarees increased. With the advent of the power loom, digitalization and cutthroat competition, the handloom started to lose its presence,” says Pandey.

“It takes much longer for a handloom to get the sari ready, therefore people have had to shift from the market. There is still a set of old customers who would go for handloom sarees rather than the powerloom one, but the number of such people has dropped dramatically.

“General customers would not understand if the sari has been prepared by the powerloom or handloom. Only a person who understands the concept and has studied the differences between the two really well would be able to differentiate between the two,” he explains.

Weavers here say that last year, post the budget, local newspapers published headlines to suggest that Banarasi sarees would be more expensive in the year 2020. But the rise in cost has been only in terms of the raw material, not the final product - as a result, only the capitalists who control the market in raw materials are getting any richer.

Since there was already no demand, and the cost of production was rising, the merchants decided to bring down their labour costs.

As for customers who still buy handloom, there are many weavers working on both power and handlooms. According to one such weaver, Abu Talha, “I did not start on the power loom willingly, it was due to helplessness. We were not able to meet the required demand and had to start this.

“However, with the pandemic, our situations worsened. Last year the cost of resham zari rose to about Rs 500 per sari, and the entire additional cost has to be managed by us alone. We go to the wholesalers and they say there’s no demand, resulting in the final product being priced the same as before.

Besides the problems originating in the business itself, there are other government-sponsored hurdles to tackle. One such problem is the electricity supply.

As the Yogi government pushed the need for installation of smart meters in every household, weavers here say, a basic amenity like electricity has became a hindrance for them. For every power loom the earlier cost was Rs 75 per machine. The same cost now has risen to about Rs 500 per machine.

The weavers state that the government told them these costs would go down eventually, and they would get a subsidy just like earlier, but it has been more than a year with no sign of subsidy implementation.

Further, the NRC-CAA duo has plagued the relationship between the Muslim weavers and the Hindu wholesalers.

According to Ashraf, a third-generation weaver from Khojwa, “Our business was affected after there were protests against the two laws. It cannot be said with certainty, since you do not know what the other person thinks of you, but the behavioural evidence is very suggestive.”

While the government has come up with several schemes declared in support of the weavers, the problem remains where it always has, in implementation.

A loan of Rs 10,000 was offered to weavers, but no person who is already in debt in the existing economy would take any more burden on themselves.

Further, literacy plays a major role in the development of this community. And the underprovision in this regard is quite visible.

Since most of these looms function from home, a lot of women are engaged in this industry. And women’s literacy in Uttar Pradesh paints a very sad and appalling picture across religions and castes. As a result, most working people do not even know about these schemes, and availing them is almost impossible.

As mentioned earlier, directly or indirectly about 6 lakh people are associated with the textile business in the city. With the diminishing marginal utility of these banarasi sarees that hold global relevance, the art of weaving is being moved gradually towards extinction. 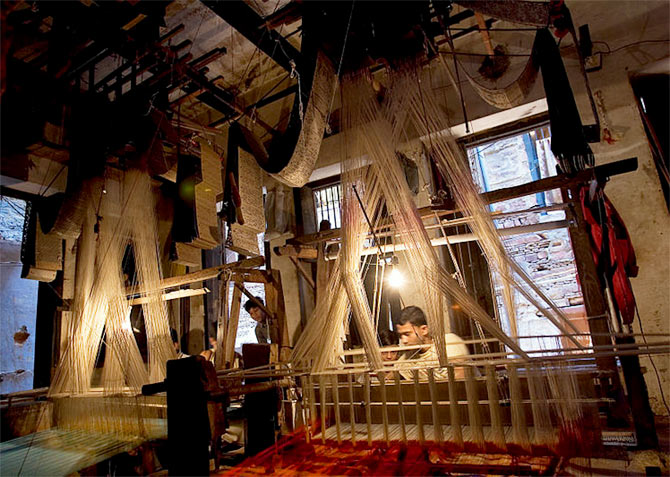