A book that speaks of a global topic involving military law and justice but flows smoothly into simple parlance that even a layperson can comprehend is indeed a treasure trove. The opening page is not only significant but poignant as it sets the tone and pace on the milestone decisions by constitutional courts across various jurisdictions that have impacted military justice – in a positive manner.

While military law and justice is a challenging topic, the book delves into the purpose of military justice in order for military leadership to maintain discipline, efficiency and morale. The book makes us realize that it is increasingly relevant to study and analyze the outcome of decisions that have a direct bearing on military courts.

Major Navdeep Singh and Colonel Franklin Rosenblatt have worked tirelessly over a period of time to bring out the importance of a subject close to their hearts. The book has been edited by both of them as it contains short essays and commentaries by jurists, judges and academics from around the world. Their aim has been to provide facts and data on the diverse course taken by military law, justice and reforms globally. The learnings from these experiences play a cumulative role.

The language is lucid and engrossing, and makes for easy reading. I highly recommend this book to all those interested in law, politics, military, policy making, governance and human rights. The book contains contributions related to various nations, including the USA, India, Canada, UK, The Netherlands, Colombia, China, Australia, Georgia, Israel, Pakistan, Ukraine, Sri Lanka, Brazil, Denmark, Nepal and Turkey.

The foreword has been written by Mr. Diego García-Sayán, United Nations Special Rapporteur on the Independence of Judges and Lawyers and former Minister of Justice and Minister of Foreign Affairs, Peru.

The Yale Draft – A valuable global military justice template and the facets of the draft have been touched upon in the book. The draft was the result of the hard work of many distinguished professionals and personalities. There are also two essays on judicial pronouncements on women in the military, one from the Supreme Court of India and the other from the Supreme Court of the United States that stand out.

The editors have been very proud about the overwhelming contribution by many accomplished women in this book. Both also share similar views about the unifying aspects of military service. It is also interesting to note that in the 25 chapters there is a huge diversity of contributors. The cases range from military justice to the basic protection of law to members of the military to offenses under military law to the use of military tribunals and how landmark judgements have been arrived at.

You do end up flipping the last page feeling more knowledgeable and with a deeper understanding of the subject without doubt.

Major Navdeep Singh is a practicing lawyer at the Punjab and Haryana High Court, Chandigarh, India. He is the founder President of the Armed Forces Tribunal Bar Association at Chandigarh. Navdeep has been a national service volunteer-reservist with the Territorial Army.

He has been decorated with a record number of 11 Commendations from the Army, Air Force and tri-service Institutions for his work for the military community and veterans. He is known for his work in the field of rights pertaining to disabled soldiers and military widows and kin and being a member of a High-Level Committee of Experts constituted for reducing litigation pertaining to military service and pension-related matters. Navdeep is a prolific writer and has authored several books.

Colonel Franklin D Rosenblatt teaches law at the Mississippi College School of Law in Jackson, Mississippi, USA. He is a retired Judge Advocate from the United States Army, where he served for 20 years. He participated in numerous military operations around the globe. He is well decorated with numerous military awards. Franklin was the lead military defense counsel in the most publicized court martial in American history. He speaks and writes frequently about military law topics and has co-authored two military justice books. He is also a Judge of the Military Court of Appeals, Mississippi, and remains active in law practice too, focusing on the betterment of military justice.

Both editors have been a part of the historic Yale Draft (Principles) on Military Justice, an improvement of the existing United Nations document on the same subject, at a Yale Law School conference. 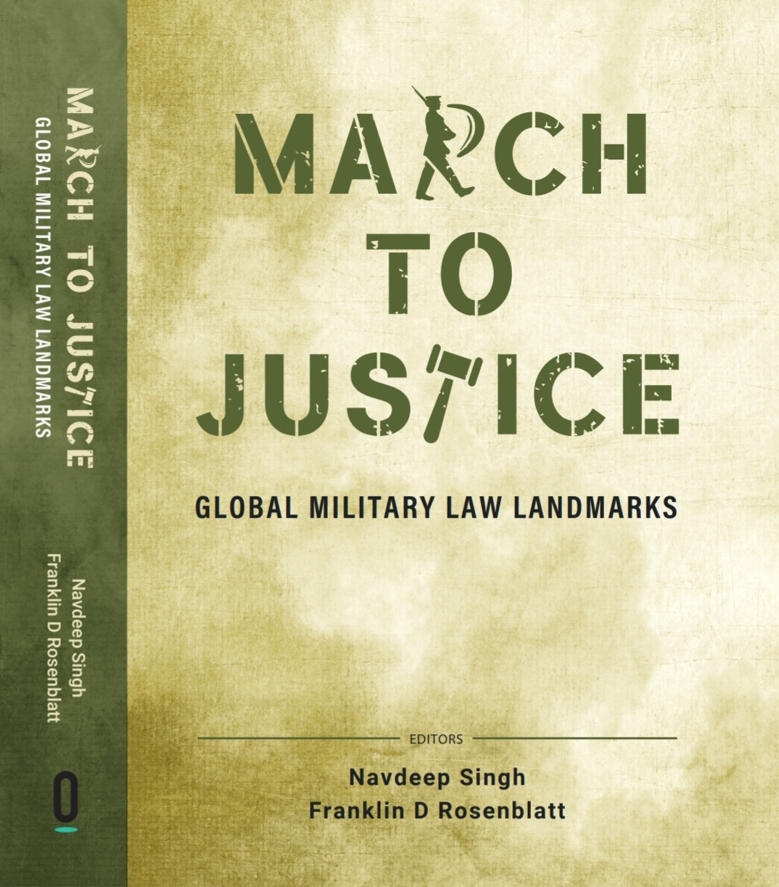