Sweets Settled in India As Our Very Own

Amongst our memories from children, there is invariably one with us standing in the sweet shop, sticking our faces to a glass panel and eyeing colorful, delicious sweets. Those days may be long past, yet our fondness for sweets has only grown. The laddoo is still our sweet, welcome reward for sitting through long pujas while the rasgulla is a regular feature during celebrations.

Gods aren't exempt from this fondness for sweets, and this fondness of theirs made sweetmeat-making one of the oldest professions in India. Ancient texts mention the production of jaggery in 500 BC by reducing sugarcane juice. This jaggery was offered to the deities. This was also the time when one of the oldest & the most popular sweet was invented, funnily enough not in a confectionery but in a hospital. It was none other than the laddoo.

Laddoo has always been our go-to sweet for celebration. Be it for buying new property, success in business, or forming new relations. This coarse round ball does not fail to mesmerize you with its flavors. Associated with Lord Ganesha, laddoo originated in India 2500 years ago. The credit for creating this delicacy does not go to any sweets-maker but the noted ayurvedic surgeon Sushruta, who used to make small roundels of sesame seeds with jaggery and coat them with honey to give to his patients.

Laddoo did not take long to make its way from hospitals, where it was used to balance raging hormones in teenage women, to the confectioneries. As soon as sweet-makers began experimenting with it, they came up with a plethora of laddoo variants from different regions. There were Motichoor laddoos from Rajasthan, dinkache from Maharashtra, nariyal nakru from Chennai and til ke laddoo from Assam to name a few.

According to the records of the first world war, Indian soldiers fighting in France were fed up with eating English sweets in the camps. The Sikh community took the initiative of writing a letter to London asking to be served pinni, a laddoo variety from Punjab, instead of English Sweets. Luckily, their request got the attention of the British, who not only arranged pinni but Indian music records to boost the morale of their Sikh soldiers.

Unfortunately however, the British soon had to discontinue importing pinni due to budget concerns. After many unsuccessful attempts to replicate Indian delicacies, such as kheer & halva in Europe for the soldiers, the British had to put an end to it. Interestingly enough, where on one hand the British failed to make Indian sweets during world war , on the other hand there exists an Indian sweet that couldn't have come to exist without European interference, namely that, of the Portuguese. This sweet is the rasgulla.

Rasgulla, a contemporary of laddoo, is equally sweet, delicious, popular, and round. The origin of rasgulla used to be a much debated issue in our country , which recently came to a conclusion when Bengal got credit for it. However, this delicacy would not have existed without the Portuguese, who taught us how to make cheese curds and broke our centuries old taboo regarding the curdling of milk.

Curdled milk was considered inauspicious and unacceptable in the Indian households, as cows were looked upon as sacred beings. However,the Portuguese traders who had settled in Bengal around the seventeenth century loved cheese. This fondness of theirs for curdled milk products was what created an opportunity for cheese curds to be recognised in India.

The Portuguese introduced the method of curdling milk with lemon juice and gradually Indians let go of their prejudice towards curdling milk in the face of Portuguese’s love for cottage cheese. With the introduction of cheese curds, the Indian sweet-makers got a new ingredient to experiment with. And thus, in the 18th century, the race for creating a new sweet using cheese curds began. Little did anyone know that the winner of that competition, the Rasgulla would go on to win hearts pan India.

In 1866, Nobin Chandra Das, a moira (confectioner) opened a shop in Bagbazar, West Bengal. There, he initially experimented with boiling cheese curd balls in sugar syrup, which unfortunately disintegrated. After endeavoring for several months to make the cheese curd balls hold together, he finally found a solution using washnut and creating bubbles. The bubbles lent a sponginess to the cheese curd balls. That is how, in 1868, rasgulla came into existence and has been around us ever since.

Interestingly, not all the sweets that we have been munching on throughout our childhood originated in India. Take the crispy, juicy jalebi, the golden round coils of which the confectioner designs on hot oil with his piping bag. The sight is less satisfying than that of watching an artist paint on his canvas. Like its many round coils, this savory sweetmeat is known by numerous names in different countries, such as zalābiya, zolabiya, jerry, jilapi, and more.

Even though its origin is uncertain, jalebi is believed to be based on the Arabic dessert, luqmat-al-qadi. They are the leavened flour deep fried fritters soaked in honey syrup & rose water. The basic difference between the two is that jalebi is made using whisked flour, whereas for luqmat-al-qadi, the flour needs to be kneaded and the round balls of the dough fried in oil.

Although jalebi reached India in the medieval period through Arab traders & invaders, it was not the first Middle Eastern delicacy that we adopted as our own. Gulab jamun is another sweet which, just like jalebi, not only has roots in the middle east, but is also based on luqmat-al-kadi. Some other sweetmeats that traveled from the Middle East & Central Asia to India during the medieval period are kulfi, phirni, falooda, to name a few.

When talking about sweetmeats we cannot leave out the halva which is a holy food for some and a dessert for everyone. Halva, being one of the most diversified sweetmeats, started its journey from Persia and ended up in hindu temples as an ideal offering for the deities, in gurdwaras, and of course in our kitchens. The term 'halva' is derived from 'hulw,' which means sweet in Arabic.

To conclude it all, our marriages, celebrations, mournings, get-togethers, and prayers are incomplete without sweets. To us Indians, sweets are more than just the last course of the meal. Sweets help us celebrate new beginnings and are good luck charms in tough times and we have been sharing love & happiness through them with others since antiquity. 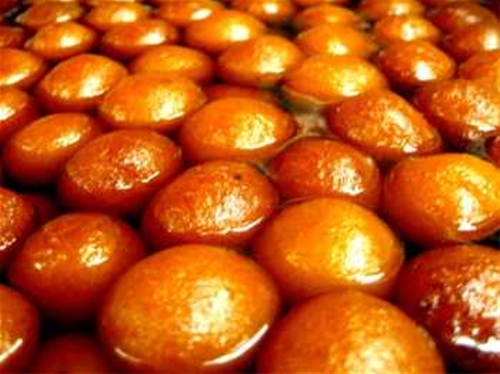