83 - So Much More Than Cricket

When the historic World Cup match was being played at the Lords, our daughter, then 12, my husband and I remained glued to the B & W television in our small Mumbai flat till the champagne bottle was popped and sprayed around on the players of the winning team. Colour television had not made its debut yet.

Each moment in the film 83 is filled with electric suspense blending smoothly into the magic chemistry of the players’ exuberance, their spontaneity and their solidarity on screen as a team, a solidarity so tangible that you can almost stretch out your hand and feel it.

I recall how the players gleefully played the tabla with their fingers on Syed Kirmani’s bald pate, slapped each other on their backs and looked so thrilled that they could not believe what hit them.

The sense of euphoria we felt after the match was over and the team was snapped holding the trophy proudly continued to haunt us for long as if we too, (a) had won the World Cup against the West Indies, (b) when our captain Kapil Dev broke the world record at Tunbridge Wells, (c) when the Indian team gained its first entry into the world-famous Lords stadium and (d) when they came home to share their historic victory against the most powerful cricket team in the whole world.

I recall that we went to a not-so-posh restaurant the following night to celebrate our win with a lavishly laid out dinner which damaged our budget, it being the end of the month.

The film is a tribute to this win that marked the Indian team’s making of history, to celebrate the killer drive and the determined spirit of the eleven cricketers who, led by an entirely focussed captain in Kapil Dev, points out clearly how it binds warring countries together and people trapped in a violent communal conflict at home sitting side by side to enjoy the thrilling match together, conflict placed on the back burner for the duration.

This win marks the consolidation and solidarity of all Indians which led to the gaining of much more than cricket in terms of both momentum and power.

No discussion on cinema and sports can be complete without reference to Escape to Victory, the greatest football film ever made. Directed by John Huston in 1981 it is set in a Prisoner of War camp during the Second World War. Michael Caine stars as Captain John Colby, who leads Sylvester Stallone and an all-star cast of footballers including Pele, Bobby Moore, Osvaldo Ardiles, and Mike Summerbee, who agree to play a football match against some local German troops, but after the Nazi propaganda machine takes over they end up in occupied Paris playing the German National team.

At the very end of filming there was an actors’ strike, unfortunately there was still one very important scene to film where the players get off the train at Paris. After the strike finished, the production company had to fly everyone back over to finish this final scene at great cost.

Back to 83. It is interesting to learn how hard Ranveer Singh worked to realise the role of the historic captain of the winning Indian team – Kapil Dev. Through the entire months of June and July 2020, Singh was practicing on the cricket field for eight to ten hours every day which, as Kapil Dev said in an interview, scared him as Ranveer was not in his twenties to be practicing so hard, not to play cricket but to play the role of a cricketer. He also stayed with Kapil Dev for two weeks, recording him as he spoke, watching him as he ate, observing his body language and his mannerisms and then taking all this back with him to emulate as much as he possibly could.

All this comes out lucidly, fluidly and incredibly through his performance aided every step of the way with the “look” he has been given, the wig, Dev’s well-known notoriously poor English and everything else which makes us conclude that if playing Kapil Dev in 83 does not bag for Singh the National Award, no one knows who can. Or should.

Deepika Padukone as Kapil’s wife Romi makes a late entry in a very sentimental cameo while Pankaj Tripathi as the team manager is given such a total makeover that it is difficult to recognise him in the beginning. His heavily accented Hindi adds to the colours of the wonderful dialogue filled with tongue-in-cheek, rubbing shoulders with the very serious Indian Captain who does not even realise that he has broken the world record. His iconic knock of 175 not out was actually shot at Tunbridge Wells on the same pitch that Kapil played on and some of the strokes are intercut with original stills of Dev making the strokes – a very imaginative touch.

The other members of the team, one of them the son of Sandip Patil who was a member of the original team, another being the son of Michael Mitchell, plays his father. The make-up team has tried its best to replicate the original members but the most outstanding makeover was, after Ranveer Singh’s Kapil, is the makeover of the actor who plays Indira Gandhi in a tiny role.

83 is perhaps the best ever example of “performance cinema” in the history of Indian cinema where non-cricketers have convinced their audience about their cricketing ‘talents’.

This is not limited to Ranveer Singh alone. It applies equally to the other actors, some of them who are making their acting debut with this film. Besides Singh, the other actors have acted with so much conviction that even their jokes among themselves are hilarious. One such is the impromptu ‘meeting’ inside the bus addressed by Kapil Dev to his team which gets over in minutes.

Another one is Sreekanth manipulating a treat of dosas at a South Indian’s home in the UK which has invited him with some other members of the team with prospects of marriage in mind for their nubile daughter. The spell is broken when another cricketer drops an atom bomb by revealing that Sreekanth was just married in March. These small bits, including the “night cricket batting” by almost the entire team to celebrate their first “win” offer just the right bit of relief in a serious film that needs to take every step with care not to overdo the credibility line.

Performance Cinema is a term that precisely describes the kind of grueling homework, focus and determination demanded by the actor who performs the role of a serious sports person, especially a real-life sportsperson. According to Stacey Stocky of the University of Denver, performance cinema combines both cinema and performance in dynamic ways, defining a media of creative work, while also instigating the development of new, defined genres.

Henry Warwick says that a performance film ‘sits between traditional, passive, cinematic experience and the dynamic experience of, say, a live music performance.’ Roland Barthes in Camera Lucia (1980), writes, ‘The power of authentication exceeds the power of representation.’

This was with reference to the photographic picture but lends itself beautifully to a different derivation of ‘performance cinema’ where the film illustrates perfection in an art/sport that is not related to cinematic forms like acting or technology, etc.

The film also brings in questions on racism where the West Indies team members, then the topmost cricket team in the world, treat their Indian colleagues and the media with arrogance and attitude which reduces to ridicule and humiliation of Indians by the West Indian audience when the Finals are on and it appears as if the Indian team will collapse like ten pins.

The British officers deny the admission identity card to the Indian team because they are convinced that India will not reach anywhere near the finals at Lords and when the PR manager tries to insist, you can actually see the British men in the neighbouring tables snigger. Then there is the Indo-Pakistan war going on in the snow-capped mountains in the northern slopes where Pakistan informs the Indian troops that there will be no firing on the day of the World Cup Finals at Lords and they open up their transistors with very poor reception to listen to the commentary.

There is also the sub-plot of the little Indian boy in London who comes to cheer Kapil Dev whose die-hard fan the boy is though his father is unimpressed to begin with. The little boy keeps swinging the Indian flag this way and that even when the Indian team is in very bad shape. He is there with his father at every match.

Though these small touches might seem like cinematic cliches, one needs to remember that this is a fictionalised version of the 1983 Finals and these work beautifully within the not-very-tight but strong script. The drawbacks are - the film’s inordinate footage which, however, does not bore us because the action just never stops. The other small demerit is an overdose of the” nationalism” ticket Kabir Khan is so fond of using in his films.

Like standard cinema, performance cinema requires a ‘moving picture’. Like live music, it calls for an audience. The audience, just by the act of viewing, participates in the construction of the event as a meaningful experience.

83 is the best example of this. It is not just a film about a historical sport event for India and also for the world, at least at that time, but it is also a humane celluloid document on how a life-defining and life-deciding match can be rescripted for generations through cinema. It is an excellent lesson for the youngsters of today who know nothing about the World Cup win, glued to their cell phones and tablets.

Sports basically, is a way of life that demands a certain attitude, high moral values, focus and strict discipline. A sport is a concept and an ideology not limited to performance in the field or within the four walls of a hall. Do these carry over in films dealing with sports through entirely fictionalised narratives or through real-life representations on celluloid?

Yes, they do and do it so well that as the film 83 begins to unroll, slowly and yet dynamically, gaining pace and electric energy we find the magic Kabir Khan along with his major star Ranveer Singh made possible in 83. The same goes for acting, in cinema or anywhere else, including real life. Keep it up Kabir Khan and team. You have made history all over again. Move on…. 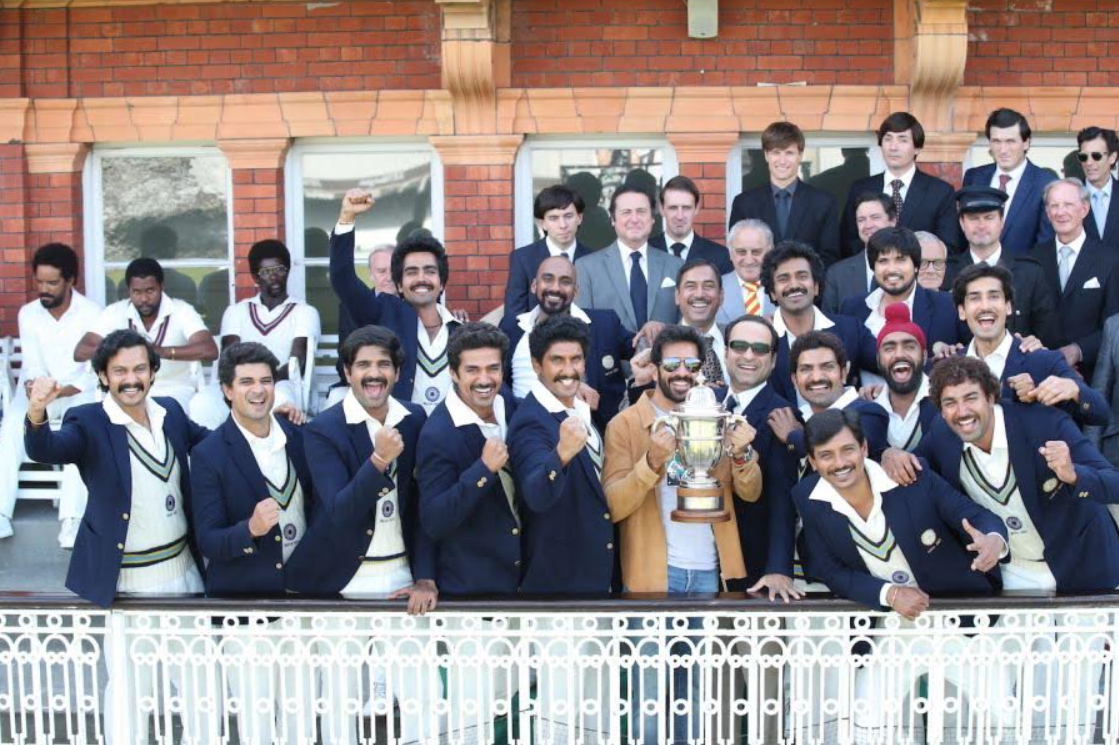