A Roller Coaster Ride On The Absurd

The film opens with Rinku Suryavanshi (Sara Ali Khan) , a pretty young girl running in Olympian speed to save herself and flee from a flock of men of different ages in hot pursuit. It turns out that she has made a habit of running away to hitch on to her mysterious lover whose name she refuses to reveal to her Nani (Seema Biswas), though she is beaten black and blue again and again by her mother’s family, her parents having died when she was a little girl.

When she is nabbed by her uncles and brought back home, as angry, as unrepentant and as stubborn as ever, the exasperated matriarch Nani orders her sons to find out any man who is new to this small town in Bihar to get Rinku married off and wash their hands off this forever truant beautiful young girl.

The three brothers kidnap Vishu (Dhanush), a young medico who has come to Siwan in Bihar to attend some medical camp. He is a Tamilian from Chennai and can hardly speak or understand the kind of Hindi these people speak. Before he can understand what is happening, they drug him with a laughing pill and Rinku , the bride,with sleeping pills, turning the entire marriage ceremony into a laughing circus.

The scene showing a decked-up groom laughing away to his heart’s content and his sleepy bride, also decked up, dozing off is a scream. The other problem is that Vishu is about to be engaged to Mandy who happens to be the daughter of the Dean of his medical college. When the couple come to their senses to discover they are a married couple, that too in the train to Delhi to leave for Chennai, they decide to part ways marking a finish to their abrupt wedding.

The problem is – Vishu finds he has fallen in love with this feisty, angry and stubborn girl and is actually relieved that his engagement broke when Mandy found out through cell-phone pix that he was already married to the very girl who was dancing away merrily at her grand engagement with the other girls.

This is perhaps the funniest love story one has witnessed in a long time within the framework of mainstream Indian cinema. The “villain” comes in the shape of Rinku’s forever elusive lover, the magician Sajjad Ali Khan (Akshay Kumar in his weirdest role) who it seems, is away in Africa to get more lessons in magic.

Aanand L. Rai, with his passion for strange and complex love stories with his earlier films Tanu Weds Manu and Raanjhana, goes one better with Atrangi Re by introducing some psychological ailment Rinku appears to be suffering from, with Vishu’s best friend Madhusudan giving her some pills from time to time to rid her of her mysterious ‘ailment’ as he is supposedly a qualified psychiatrist.

Sajjad Ali Khan, visible only to Rinku, is very possessive of Rinku and does not like her growing attraction for the very young and strapping Vishu. So, a disheartened Vishu begins to cry in secret and in front of his friend Madhu who is exasperated with his friend’s condition.

Add to this the lovely music by none other than our own A.R. Rahman, with numbers like Chaka chak and Little little are very melodious and fit into the changing moods of the film. Rait zara si is like the cherry on the cake. The lyrics by Irshad Kamil, thankfully, all on the soundtrack, add to the high entertainment value of the whole film. Rai is a master at positioning his song numbers and he proves this with this film too.

Then there is the very colourful and yet, layered production design (Nitin Zihani Choudhary) as the film journeys through Sivan, Bihar and moves to Delhi and Chennai changing colours with every change in the backdrop and the place setting. Pankaj Kumar’s cinematography effectively adds to the glamour quotient of the film not missing out on the non-glamorous settings of Rinku’s Nani’s home, or, the public toilet where Vishu breaks into a wonderful dance or, the very mundane room in which Vishu brings in his new bride.

Dhanush as Vishu runs away with the top prize though he has much-less-than-hero looks or body and has not used make-up for his very grassroots character. He expresses himself either by dancing away in private when he is thrilled, crying shamelessly when he is sad, and triggering laughter among the audience when he is getting married with a laughter pill inside him. He breaks into Tamil when he is extra excited, never mind if the listener can understand him and uses his friend Madhusudan's shoulder to cry on. It is a marvellous performance which proves that looks and an eight-abs, sexy body are futile if the actor is Dhanush.

Sara Ali Khan as Rinku is as free, as natural and as spontaneous as her mother Amrita Singh was as a young heroine in her hey day and shows that she can run like a leopard, dance as gracefully as Sridevi and emote as naturally as her mother did. Akshay Kumar plays a magician, with visible lines under his eyes perhaps for the first time in his entire career and though he tries his best, his star charisma often comes in the way of spontaneity. Ashish Verma as Madhusudan is brilliant as usual and does full justice to a role that seems to have been written only for him. Seema Biswas’s brilliance however, is reduced to a short cameo but that has been her beat for years.

All loose strings are tied up in the end as loosely as possible in ways only Rai and his friend writer Himanshu Sharma with little logic and no meaning revealing ‘twists’ like - the real identity of Sajjad Ali Khan, the truth of his relationship with Rinku and why she is so obsessed with him while she is also in love with Vishu who offers her strong moral and emotional support. Just enjoy the fun and throw away your thinking cap to relax and rejoice. Rai and his writer Himanshu Sharma (story, screenplay and dialogues) want to entertain you.

Atrangi Re roughly translates as “All Colours Hey” which means nothing and the same goes for the film. Nothing in the story makes the least bit of sense or has any dose of logic in it. Yet, you get rolling with it as it takes you on a jolly roller-coaster ride with lots of bumps along the way into a world of delightful entertainment. Watch it on your favourite OTT platform. Soon. 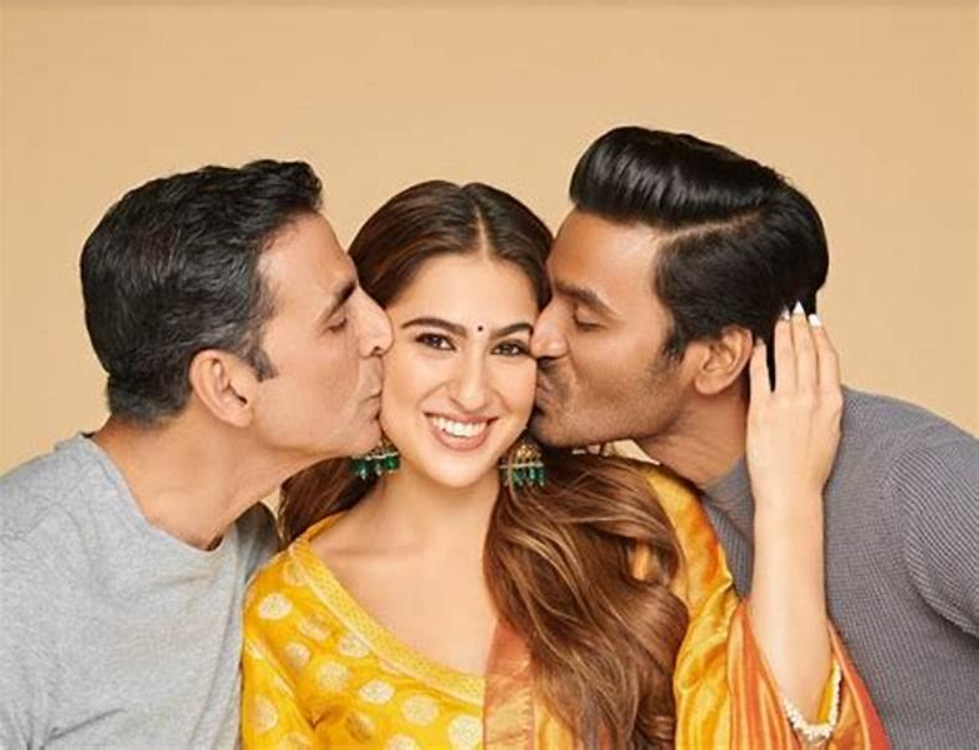