The Middle Finger has an aura of intrigue, even a strongly sensual one, attached to itself specially when it is the title of a novel. And that too, a novel by Saikat Majumdar who takes his own time to ponder over a plot for a novel, keeps thinking and re-thinking, musing and working on drafts and redrafts after which the novel takes final shape.

What comes out between the very charismatic covers (this one by Pinaki De) is a masterpiece and that is not an overstatement. The cover is unique in the sense that it is actually a double cover where the eye peeping from behind the soft cover actually belongs to two women and not to one. The dominance of gray is another revelation.

Saikat Majumdar is no new name within contemporary Indian writers writing in English. I was introduced to his writing by a very young friend who is a noted food critic. Firebird was Saikat's second novel. I was dumbstruck with the way he structured his story opening with a small boy shocked by the cremation of his mother even when it was a stage scene in which his mother was playing a role. The book haunted me for weeks till I went back to read his first, Silver Fish and then The Scent of God.

Each one came thinly layered with different characters living in their small worlds of sunshine and shadow, mingling into the mainstream to eke out a livelihood and then back to their own crevices and narrow bylanes of life. But they remain rooted to the earthy browns and greens and riverines and book stalls of Kolkata first and West Bengal next and do not venture beyond.

In The Middle Finger, Saikat moves out of the comfort zone of the Indian and specifically, the West Bengal ambience to step into the corridors of US universities, the literature courses they offer, the teaching positions they hold zeroing in on the protagonist Megha, who left her Ph.D. midway to join an underpaid writing position at Rutgers, she is not very happy doing.

Persuaded by friends and colleagues to finish her thesis topped with an offer of a teaching post at a University in Delhi, she flies back to set up her new home in Delhi, with the help of a new “family” that grows around her completely novel in her experience and it takes time for her to understand that after all, she is not as alone as she thinks she wants to be.

For the first time in his journey through novel writing, Saikat is seeing the world through the eyes of a woman, rather, two women, so we read about them from Saikat’s perspective tinged as it is, with the male point of view. The setting up of her flat, bringing in redone furniture to decorate it, arranging her huge collection of books which follow her from the USA.

All this is done slowly, slightly haphazardly with the help of her local driver Mr. Ajmal, Shazil Bhaiya, Reynold and Poonam, of course, Poonam who sought out Megha to help her organize her household the best she can. Poonam tries to get close to Megha not as another woman who is distanced from her in terms of age, education, and class but as a native local of Delhi warming up to this ‘distant’, America-returned lecturer in Delhi whose language she cannot wholly follow but becomes not only an admirer and a fan but also, her ‘pupil’ by her own decision.

Poonam is happy remaining several rungs below Megha along the social ladder and begins to borrow books from Megha to hike up her reading. She volunteers in a local church and gives speeches too.

Saikat brings up Megha’s talent for creating poetry, referred to as “underground” poetry from time to time and Poonam is mesmerized at one of these poetry reading sessions. There is also a beautiful description of a scene where an American trained in classical Indian dance performs a graceful dance to Megha’s poetry which even Megha is amazed by.

Saikat, in this very different novel, is subdued, understated, subtle as if afraid of taking one wrong step along the way and spoiling it all. His language is as fluid and flowing as water as he describes, in minute, almost visual detail, Megha’s recollections of her life in the US compared with the dirty old Delhi shops, car parking troubles, the lack of soya milk when she has to make tea for her new ‘family members’ who are overly conscious of their class differences and remind Megha of the difference with the reverential way they speak to her, maintain social distance and so on.

The reference to the Drona-Arjuna-Bhima story Saikat makes before the novel begins is reversed in the sense that teaching anyone is not boxed within the teacher-student relationship where one teaches inside a classroom or in one’s home but is a continuous process within which, teaching can happen incidentally, or, it can happen when the teacher-disciple roles are reversed, or, when the teacher and/or the student is not even aware that teaching is actually taking place.

This entirely ‘out-of-the-box’ novel, in terms of the author’s use of space, the way he captures the different rhythms of life in places as different as Delhi and New Jersey or Rutgers University, his description of how Poonam and Megha feel a strange pull towards each other without articulating this any time, anywhere, is so tactile that you can almost stretch your arm and touch them.

These feelings are hardly ever articulated in words yet strongly felt in physical and emotional terms spilling over to the reader filled with the expectation that something is about to happen between the two. But nothing ever does. Poonam does not shy away from claiming that she considers Megha to be her teacher though Megha does not quite agree as she has not ever ‘taught’ Poonam anything concrete that can be defined as “teaching.”

The earlier part of the novel when Megha is in the US keeping in touch with her mum who lives in Singapore, is too ‘foreign’ for the one who is not used to looking at Life in the US from up so close. The references to lots and lots of books are beyond this lay reader’s knowledge quotient and raises the novel to an intellectual plane the lay reader may not be used to.

Saikat’s language is so fluid, so variedly textured and so ‘new’ that it often seems that the content organically emerges from the language, the style, which makes for a beautiful form for a brilliant novel, structured just so. The reading is smooth and seamless minus jerks and shocks, all deliberately designed to contain the explosive underpinnings of the relationship between Megha and Poorna. They have “alternative” voices in the unfolding of the chapters but at times, the distinctions are rather blurred.

Whose is “the middle finger” in the title? Sex is only felt, that too, softly, so, is the middle finger the author’s, pointing out to his world of readership the irony contained in the straitjacketed relationship between teacher and student? Or, does the “middle finger” suggest that relationships are as fluid, as liquid, as volatile and as fluctuating as life itself? Read the book for yourself and decide. 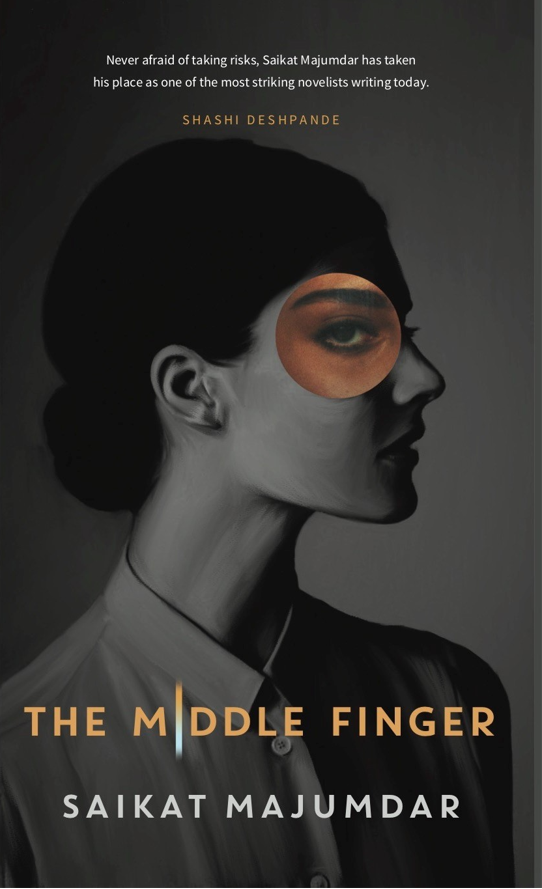