A feeling of community

NEW DELHI: India’s prolonged covid lockdown not only battered formal education, it also made community spaces inaccessible. One such shared space forced to shut down is public libraries.

“Most of us, who are preparing for competitive exams, went back to our home states when coaching centers were closed. We could not even access the libraries for self-study,” says Shubham Shukla, 25, who is from Muzaffarpur and preparing for the Bihar Public Service Commission exam. Before the pandemic he would frequently visit public libraries for study material and to spend time in their reading rooms.

Data shared by Babita Gaur, a former senior officer at the Delhi Public Library, shows its membership had been increasing year by year, from 1.07 lakh people in 2014 to 1.87 lakh in 2019. Since the pandemic however, “footfall at the library has definitely decreased.” With 32 branches in the capital region, the DPL is said to be the busiest public library in south and southeast Asia.

While libraries are vibrant places for interaction and discussion, they also provide a feeling of community and belonging. “After spending a few hours at the library, whenever we used to go for tea breaks, we would meet people who were preparing for other exams. This way, we used to share the exam patterns of different exams, discuss current affairs, and sometimes have a small debate around hot topics. It is all lost now,” says Shukla.

The closing of libraries also deprived many of a calm, peaceful ambience that would give them the mental space to read, learn, research, write, and think.

Parashram Patil, a fellow at the Nehru Memorial Museum and Library, used to visit the facility frequently before the pandemic hit. An international expert at the United Nations Framework Convention on Climate Change, Patil says that covid access restrictions have deprived him of an atmosphere conducive to research. “I am working on a book and you can’t do such a laborious task sitting at home. Also, once this habit breaks, it is very difficult to go back into that same momentum.”

While the closures and restrictions have been a challenge, many libraries are also turning to online services, including book requests and pickups at the British Council Library, and online materials at the DPL. “Since students are not able to reach the libraries physically, the libraries are now reaching them using information technologies. The process of learning hasn't stopped,” says Gaur.

At the libraries seeing more online visitors, the organisers have started working on new ways to engage. Chhaya Sharma, director at the American Center Library says they have organised several webinars to reach the students. Sometimes, more students participate online than the library space could have hosted. And by upping its social media game, the library (also called the iHub) has seen its membership numbers increase.

Meanwhile, a whole cohort of people have started their preparation journey for entrance exams during the covid period. For most of them the difference between using library websites and actually visiting one has blurred. “I started preparing for the exam in 2020 itself. I never got the chance to explore the potential of public libraries fully as most public libraries were not open. So, while preparing, I mostly refer to online material,” explains Chirag Mittal, 24, a Union Public Service Commission aspirant.

Others like Patil, who have spent significant time inside actual libraries, think that websites will never replace them. Patil who hails from a remote village in Maharashtra says that public libraries are a window to the outside world for many. He feels that privileging online resources might disadvantage those who live far from the cities.

23 year old Sneha Pal, another UPSC aspirant in Delhi, is one such person. She hails from Kandemai village in Farrukhabad, Uttar Pradesh, and is missing the city’s public libraries, that provided her a calm reading space and access to many reading and reference materials, at an affordable price. She says that back in her village she had neither peace and quiet nor a decent enough internet connection to access library catalogs.

It will be interesting to see how the pandemic changes the dynamics of public libraries in the country. If they transition from being a shared and accessible space to computers and smartphones, those without the means or internet provision risk being deprived. Nevertheless, as in many other sectors, the pandemic seems to have given most public libraries the push to explore their online potential and expand their user count.

Will India’s public libraries soon offer a mix of the real and virtual? “When the libraries would reopen fully, the rush would be there again with the plus point of the virtual world. In the pre-Covid period, users were not much aware of the usage of public libraries in online mode, but now, they have the opportunity to decide whether they want to use online or offline material,” says Gaur.

“I will start revisiting libraries when they are fully functional. I think my efficiency has significantly reduced by just studying at home,” says Shukla, who is patiently waiting for the public libraries to reopen. “I sometimes miss the physical touch of books.” 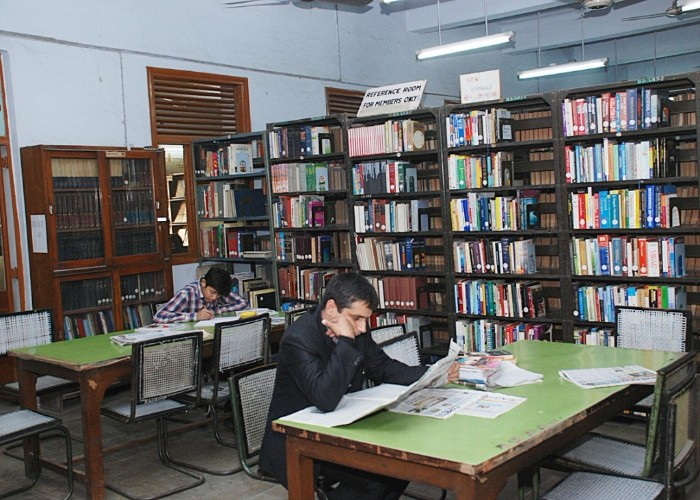