The 'honest and angry' image is mere arrogance

I thank myself for not having watched the BBC hit Luther from which, Rudra: The Edge of Darkness has taken birth, officially, in an Indian avatar. It is easier to take the series as an independent OTT series, than comparing it with Luther, its English “original”. Comparisons really do not work if one has a British BBC “mother”, and the other is a born-Indian breed with its own linguistic and cultural baggage thrown in.

Rudra: The Edge of Darkness marks Ajay Devgn’s entry into the OTT world, not really as a suspended police officer with severe anger issues. We have already seen him as one in many of his films for the large screen, but something is not right. There is nothing much to see in terms of his evolution as an actor. The flaw in the “honest and angry officer” image lies in the arrogance Devgn wears on his bearing, on and off screen. This arrogance spills over from his persona as a “top star” of Bollywood, to the characters he essays on screen, and he does not exempt his OTT debut from this either. We identify him more as “Ajay Devgn playing Rudra” than “Rudra, the angry policeman.”

Devgn is very confident of essaying any character he chooses to perform in, and Rudra:The Edge of Darkness is no exception. The film may be categorised as a “police procedural” as defined by police novelist Hillary Waugh who writes, “these are stories not just about policemen but about the world of the policeman.” Though Devgn occupies a major slice of the cinematographic, performative and narrative space of the film, his action, anger and movements are mainly placed within the police headquarters he functions in.

The anger however, is not confined to the limitations of the system he is trapped in, where criminals walk out for lack of evidence or something similar, but extends to the failure of his marriage to Shaila Durrani (Esha Deol) who now lives with another man. So, Rudra is a failure both in his marriage, and in his official capacity as a top police officer who, quite strangely, often takes the help of the beautiful Aliyah Choksi (Rashii Khanna). Aliyah Choksi, has killed her own parents and their pet dog in cold blood, but no one can touch her because there is no evidence.

Rudra is prouder of his integrity than his erratic service record in the police force, so it is strange to find him interacting with Aliyah who springs up like Houdini’s magic tricks whenever he thinks of her. Aliyah seems strangely attracted to this police officer, as her attempts to deepen the wedge between Rudra and Shaila show. Neither is Rudra interested in trying to nail her down to the heinous crime she has committed, nor is he interested in cutting off from her.

This sends out a very “immoral and unethical'' message in which the narrative pits a high-ranking police officer with anger-issues against a cold-blooded criminal! Where then, do his morals lie? How does he try to incriminate the corruption that exists within the police system if his very moral base is all wrong? How on earth does Rudra collaborate with a person whose ideology is diametrically opposite to his own? Rashii is brilliant in her sensual role. The sexual tension between the two is palpable, but spoiled by the self-conscious distancing of Rudra at penultimate moments of closeness.

Aliyah helps Rudra in shooting the last criminal down in this six-part series but continues to wander across the city as free as a bird! Perhaps, “The Edge of Darkness' ' in the title comes from this contradiction. Her earning a Ph.D. at 18 is a bit too far-fetched and the wigs she wears are terrible.

Though Rudra dominates as the central character, there is a lot of, rightly placed emphasis on teamwork. The contribution of other investigators, portrayed here by excellent actors such as Atul Kulkarni, Ashish Vidyarthi, Tarun Gahlot and Ashwini Kalsekar as Rudra’s hard-hitting, ‘tough, but tender-inside’ woman boss. There is significant focus on methodical procedures such as forensics, research, surveillance and interrogation.

The “killings” are as bizarre because they are committed by “psychos”. Aliyah kills her parents because she wants to prove her genius at not getting caught. She kills the dog because he would be the “sole witness”. Another man is somewhat shaped like a “godman” disguised as an artist who paints only with human blood, so he must kill for it. A “schizophrenic” taxi driver loves to sniff ladies’ handbags, while another “amputates women at will”.

They are nabbed with Rudra’s “psychological analysis”, helped by Aliyah who is one among them. Rapidly edited action scenes show us a Mumbai we really do not know. The “police headquarters” has interiors like a well-kept hotel.

Ajay Devgn stands out in a wonderfully multi-layered performance in the title role matched frame for frame by Raashii as Aliyah, and Atul Kulkarni as his friend and colleague. Esha Deol in her OTT debut looks extremely jaded and faded, and does not act well. This may perhaps be attributed to the weak script that fails to flesh out her character well.

The cinematography uses blue-grey tints throughout to underscore the “edge” as well as the “darkness.” The music is good but could be lower in decibels.

Director Rajesh Mapuskar proves his versatility, as this edge-of-the-seat thriller is a switch from his comfortable entertainment zone of Ferrari Ki Sawaari. 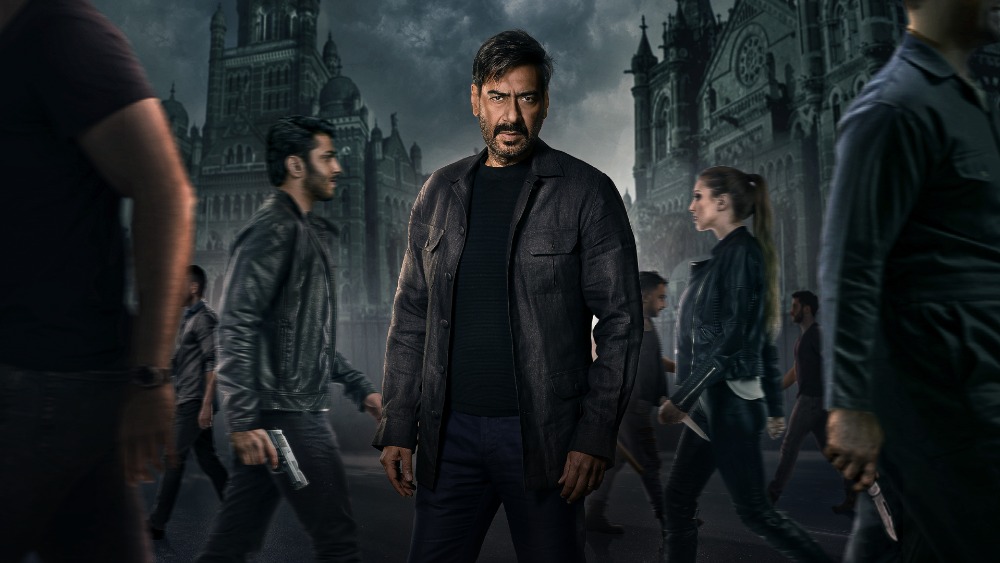