The Rapist: The Other End of the Rope

What happens when a rape victim discovers she is pregnant? Does she carry on with the pregnancy or does she abort the “rape child’? How does her husband react when she decides to keep the baby? What makes her want to interact with her rapist, now waiting to meet the hanging rope? Rape is often filmed through strategically composed lighting, carefully choreographed shots, sound effects, visual metaphors of props and property and so on. None of these, however, happen in Aparna Sen’s film, The Rapist.

Rape is a political act. It is a means of intimidation and control which functions to perpetuate the subordinate status of women in patriarchal societies. In her book, Against Her Will, Susan Brownmiller argues that the possibility of rape has served as the main agent in the “perpetuation of male domination over women by force.” Her account goes back to the farthest reaches of recorded history to look for evidences of attitudes towards rape. She contends that once ‘discovered’ by men, rape has been, and continues to be used as a means to control women through the fear it inspires. The absence of a quid pro quo from the woman who is a victim of rape has made this a volatile weapon in the hands of men.

According to the unwritten laws of society, ultimately women are held responsible for acts of violence against them. This is a powerful tool of control. To make this control effective, it is not necessary for all men to rape all women; just a few men can effectively carry it out on behalf of the rest. Perhaps this film throws up an example where the only identity the victim is left with is, as she says so herself, “a woman who has been raped”. Thus effectively wiping out all her other features that form her composite identity, such as her social, marital and professional status, her involvement as an activist for the Anti-Death Penalty movement and so on. As if getting raped was her fault!

Feature films on rape till date, have kept their focus on the victim and the social outcast she is turned into, though she is the victim and not the perpetrator. But Aparna Sen has different ideas. She titles her film The Rapist and turns the perpetrator into the protagonist, in a manner of speaking. The Rapist is perhaps Aparna Sen’s most controversial film, as, for the first time, the director decides to experiment with the mindset of the rapist, even after he has been awarded a death sentence. She stretches it to setting up a series of meetings between the rape victim and the rapist, a brutal reality no one has even discussed before in film or in writing.

The film opens on an enlightened, upper-middle-class couple, both professors of criminal psychology in Delhi institutions, and are activists in the anti-death sentence movement. They are in love and are desperately trying to have a baby. They live an affluent life with Naina Mishra (Konkona Sen Sharma) researching criminals on death row, and her husband Aftab (Arjun Rampal) backing her all the way.

One evening, after college, Naina and her friend Malini (Anindita Basu) rush to a slum in Noida to try and rescue a young girl who has just killed her infant daughter, from her mother-in-law’s wrath. On their way back, Naina and Malini fail to get a cab. While they wait for the bus, two guys from the slum rush in on a bike. One of them rapes Naina brutally, while the other breaks Malini’s neck when she tries to rescue Naina. Malini dies instantly.

Most films about female rape victims become opportunities to depict the act of rape for the titillation of the male audience, no matter how these victims ultimately respond or avenge themselves. But in The Rapist, Sen refuses to use the camera as a voyeur. The rapes are not graphically shown and later, when they are shown, the recaps are picturised using the natural, and dim street lights. The screams for help are much louder than the visuals of the two women lying on the lonely, dark street till a man working in a public bus informs the police.

Sen moves on to explore the disastrous impact the rape makes on Naina’s emotional, physical and familial person while she is subjected to continuous physically painful treatment and humiliating questioning by the police. The first question she is asked is, “are you a hooker?” When Aftab arrives and says that he is her husband, two elderly women shockingly say, “she is Brahmin, and what a shame that she married a Muslim! What has the world come to?” These scenes are brought alive by the performance of Konkona Sen Sharma in perhaps the most challenging and multi-layered character of her career.

As she begins to physically recover from the severe injuries, after the judge has awarded the death sentence to the teenaged rapist Prasad (Tanmay Dhanania), Naina decides to interview him. After a gynaecologist declares that Naina is pregnant and it is certainly not Aftab’s baby, Naina refuses to carry the ‘rape child’ though Aftab tries to dissuade her. She changes her decision to carry on with the pregnancy and now, Aftab is unhappy with her decision.

Cinematically, all this is presented with great sensitivity by Sen and her crew. The scenes at the police station with paunchy, unforgiving policemen treating an injured Naina like a hooker, the painful medical intrusions into her body; scenes of Naina at home, starting at the slightest sound, suffering nightmares to sharing her pain with the housemaid who faces marital rape every night, throw up a collage of images which strongly yet subtly suggest what a raped woman goes through.

The sound design plays a stellar role. Naina’s painful screams, the two women’s cries of agony shouting for help, television news channels describing the incident, slamming doors… Ambient sounds define Naina’s agony, especially when she imagines the broken-neck Malini speaking to her. The music is muted and does not disturb the scenes where the sound is more important than the music. The volatile fluctuations in the relationship between Naina and Aftab are brought out well specially when Aftab is open about his rejection of the newborn in their home. His one-night stand with an old friend is a serious comedown, even as a coping mechanism for him. Does it also not smack of power in a different way? “My wife is not able to give me sex so let me get it from someone else”?

The twist in the tale comes, towards the end when we are introduced to Prasad, the rapist, in his solitary cell, unwashed, dirty, waiting to be hanged to death. Though Aftab is against it, Naina insists on meeting Prasad in his cell under the guise of her “research.” She meets his widowed mother too. By the time the rapist and the victim seem to have warmed to each other, his death sentence is scheduled. He requests her to come to the execution.

Paragraph 872 of the Delhi Jail Manual states that after taking prior permission from the government, the jail superintendent can allow social scientists, psychologists, psychiatrists who are conducting research on death sentences to be present during an execution. "The jail superintendent's discretion shall prevail in the matters relating to grant of permission to witness execution," the manual states.

So, in spite of Aftab’s severe objections, Naina sets out to witness Prasad’s execution. What did Naina wish to prove? Whether Prasad became a rapist because of his nightmarish upbringing where he himself was a rape victim? Or, because she wanted to see who her child’s father was. Or, was it to come to some conclusion about whether society actually ‘creates’ a rapist or is a rapist born to rape?

When she leaves, she has no answers. Sen lets the audience draw its own conclusions. Prasad’s angry outburst before he is taken to the hanging platform shocks Naina, but she remains doubtful about Prasad’s repentance.

Does this take us back to square one – that rape is an act of power any man can commit on a woman, or on a less powerful boy or man? Or, thanks to the magnificent performance of the young Tanmay Dhanania in a negative role, do we leave the auditorium with a tinge of empathy for him? At this point, I really have no idea.

The Rapist is a film you carry with you outside the theater and keep musing about the rights and wrongs Sen has tried to put across. She has not summed up her main argument. Nor has she offered any answers, easy or difficult. She has raised questions about pregnancy after a rape where questions of class, heredity, etc arise. Rape, in the final analysis is all about power. It has little to do with the male libido or with the backstory of the rapist. 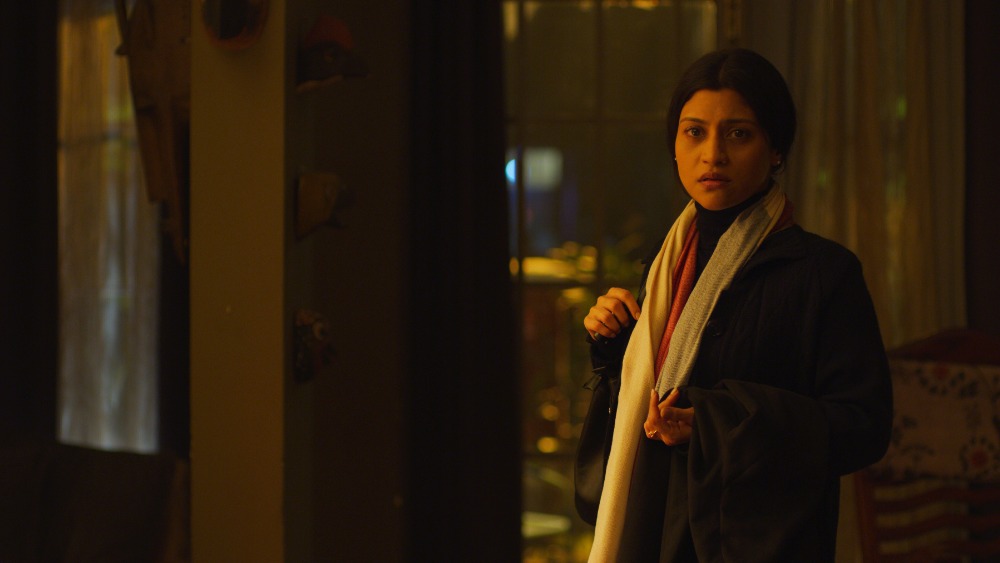