A red alert needs to be sounded here

It’s all hands on deck as individuals and NGOs rally to do what they can to patch up the safety net in these times of global pandemic. In the remote district of Namsai in Arunachal Pradesh, Chow Amat Namchoom, in his late thirties, becomes one of the many ‘one-man armies’ around the globe, and particularly in the region, bent on helping his neighbours protect themselves.

And how he does it is by making hand sanitisers and handing them around.

Sanitisers have become scarce in markets everywhere and are particularly missing from Namsai’s tiny shopping area, though prescribed as the only way, besides washing hands thoroughly with soap, to keep the deadly COVID19 contagion at bay.

Namchoom has distributed several litres to the district administration and other frontline workers in the district, which is vulnerable, being close to Assam which as of today has recorded 28 cases of COVID19, with the patients’ travel histories still being tracked down. 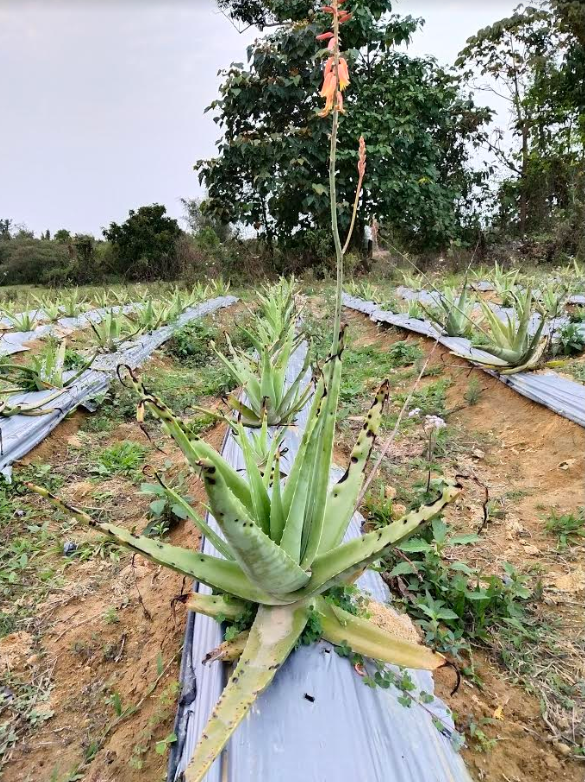 “I was constantly worried to see our people in the offices, health workers and police doing duty without any hand sanitisers,” he told The Citizen.

A frequent visitor to government offices for his own business related work, being an award winning entrepreneur and progressive farmer he noticed the absence of hand sanitisers, which were declared a mandatory item to be used in every public place. He was told they had tried to procure the item but could not find it in the market.

The unsafe workplace gave him nightmares, since the novel coronavirus is said to spread on a single touch. Also it is a fact that people busy at work cannot keep washing their hands, especially policemen on duty, either at checkposts or the traffic points. He often thought about this, he said.

Sharing his concerns with his wife, Nang Nikhita Namchoom, they hit upon the idea of using the aloe vera crop ready for harvesting in their plantation to make hand sanitiser. 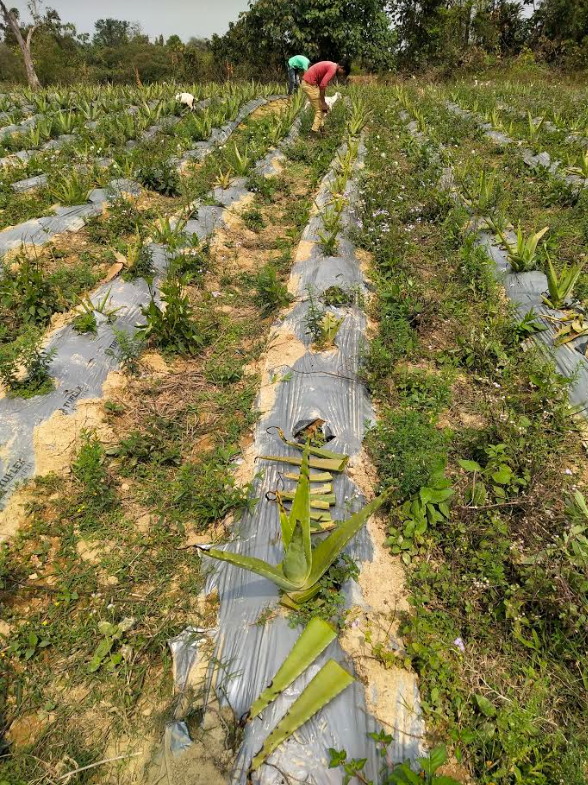 Namchoom said the aloe vera plantation was a long term scheme with a buyback arrangement with a concern that was supposed to set up a value-adding unit in the district. But these plans were cancelled because of the massive agitations against the Citizenship Amendment Bill, and then again when it became an Act.

Under the present circumstance it turned out to be a gift from heaven.

Aloe vera based hand sanitisers are much sought after even in normal times and more so in times of the COVID19 scare. Namchoom said they immediately harvested a gunny bag of the aloe vera, squeezed out the juice in an ordinary mixie, let it settle and mixed it with appropriate amounts of ethanol and glycerine to produce the sanitiser.

Before doing this he had taken expert opinion about the efficacy of his idea. He said he had also consulted his brother who as a doctor endorsed the idea. He then scoured the internet for instructions and found several on YouTube which he followed. 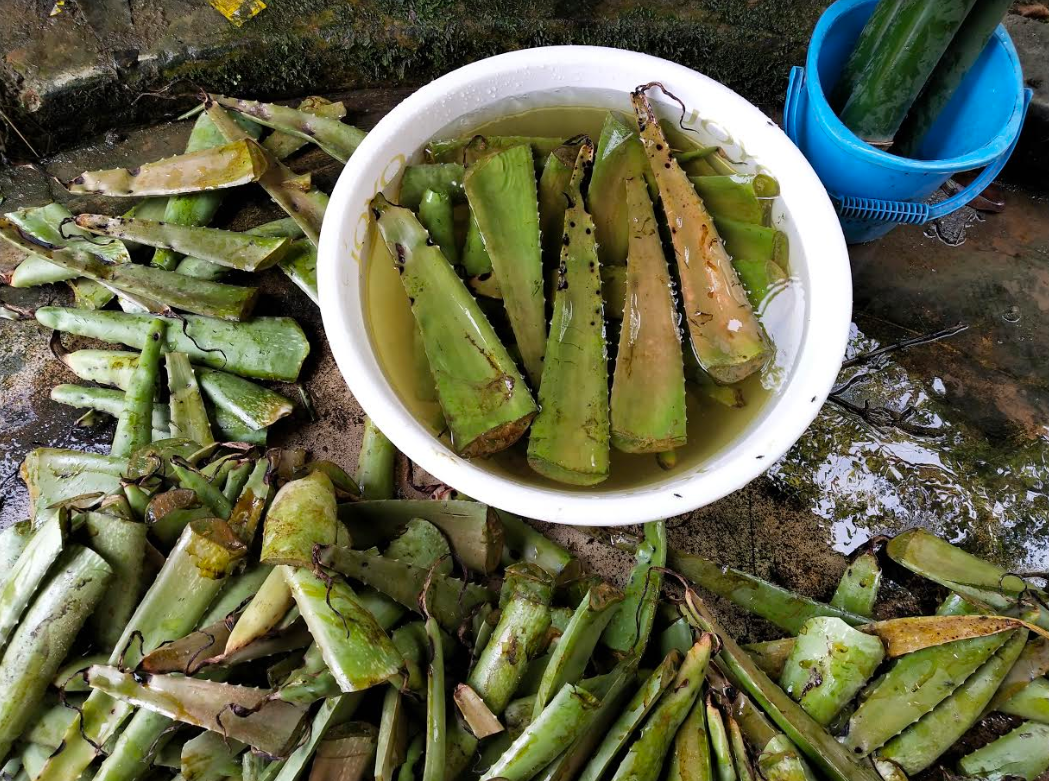 He said the main thing to ensure is that the ethanol content is brought to 70%. He added some Dettol for good measure, figuring that “general people have a good feeling about this popular antiseptic.”

“I also added some essential oil to give it a good smell, as aloe vera gives a stink after a few days,” he said.

The first batch of about two litres was donated to the district administration. Officials were so happy with it that they called him in the next day to hand him ten bottles of ethanol measuring around four and a half litres. They had bought it to make sanitisers for the office workers but never did as they were not sure how to go about it.

Namchoom took it gladly, and with more aloe vera juice from his plantation he produced several litres of hand sanitiser. Of this he handed over ten bottles to the district administration, and the rest he donated to the health department and the police. 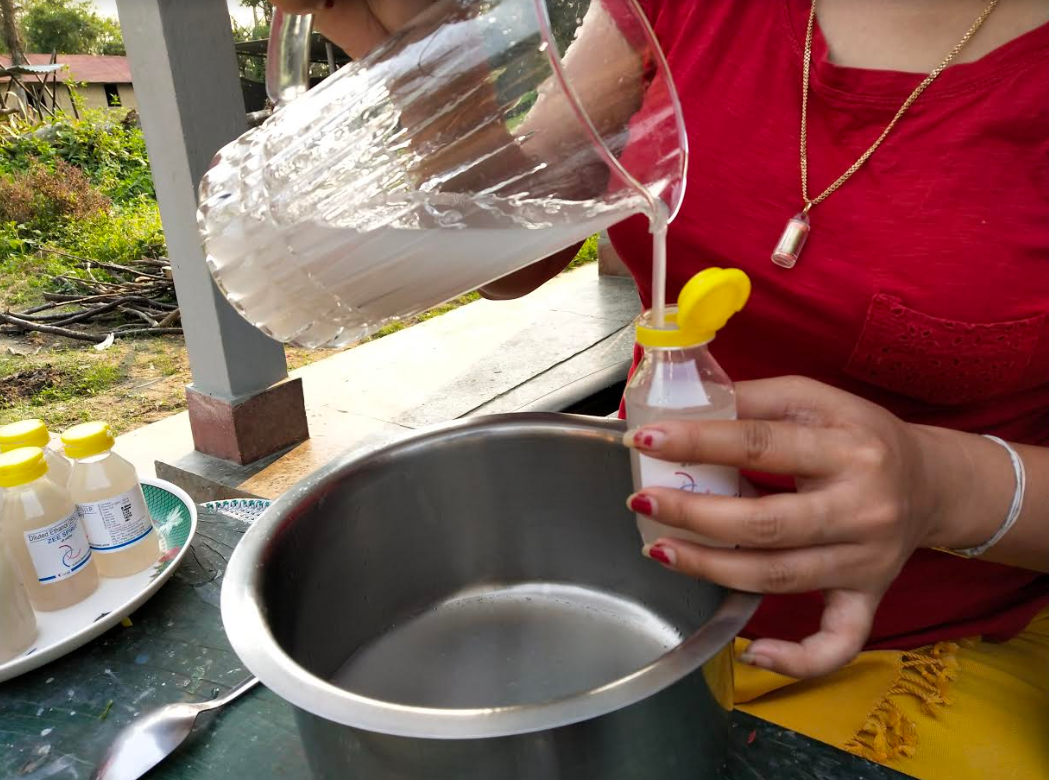 “We have lots of check posts and I’ve seen policemen at work. They are so exposed,” he said.

They most urgently need it. But since he could not hand it over to the police superintendent’s office, he did the next best thing by handing over bottles to the cops standing on duty wherever he came across them.

He also gave aloe vera juice to the district hospital to make their own hand sanitisers. Namchoom said he did that because he could not find ethanol or glycerine in the Namsai market.

“It is not available anywhere or else I would have bought and made it for them” he told The Citizen, saying he was willing to make it for anyone who could provide the two unavailable components. 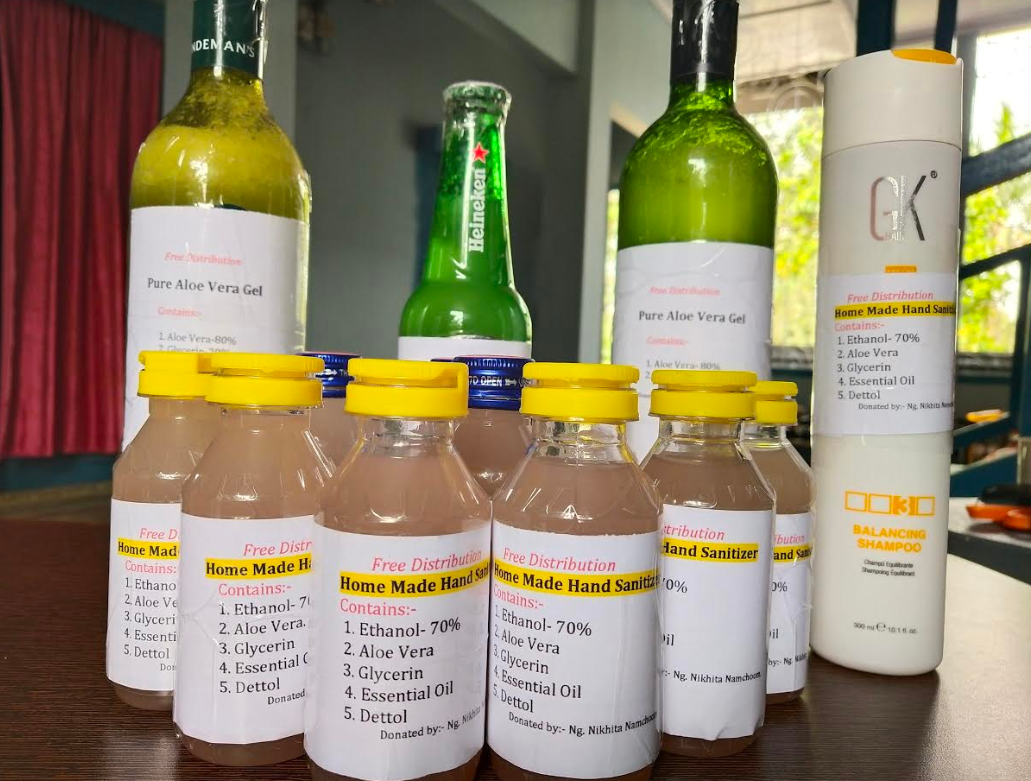 Shopkeepers are his next concern. As soon as he gets the chance he wants to see to it that they use hand sanitisers after every exchange of goods and money.

“God forbid, if one of them gets infected and does not know, then imagine how he could infect each and every one of his customers. They must use hand sanitiser after each customer,” he said.

In the absence of widespread testing and with many people contagious without showing symptoms, one cannot be too careful.

To add to the urgency, a red alert needs to be sounded here as the first COVID19 case in the state was found in Tezu, the headquarters of neighbouring Lohit district, from which Namsai was carved out in 2014.

“Even though the patient has been transferred to Assam, it goes to show how vulnerable the district is,” Namchoom said.

If the state government fails to take stringent protective measures this contagion could spiral the tiny numbered tribal populations into extinction.

People like Namchoom’s acute apprehension is not misplaced as Namsai is an ‘open district’ where despite the constitutional cover of restrictions such as the Inner Line Permit system there happen to be a large number of non-indigenous people settled here.

One can only hope that the state government wakes up soon and ensures the supply of all required personal protective equipment for the frontline workers here. 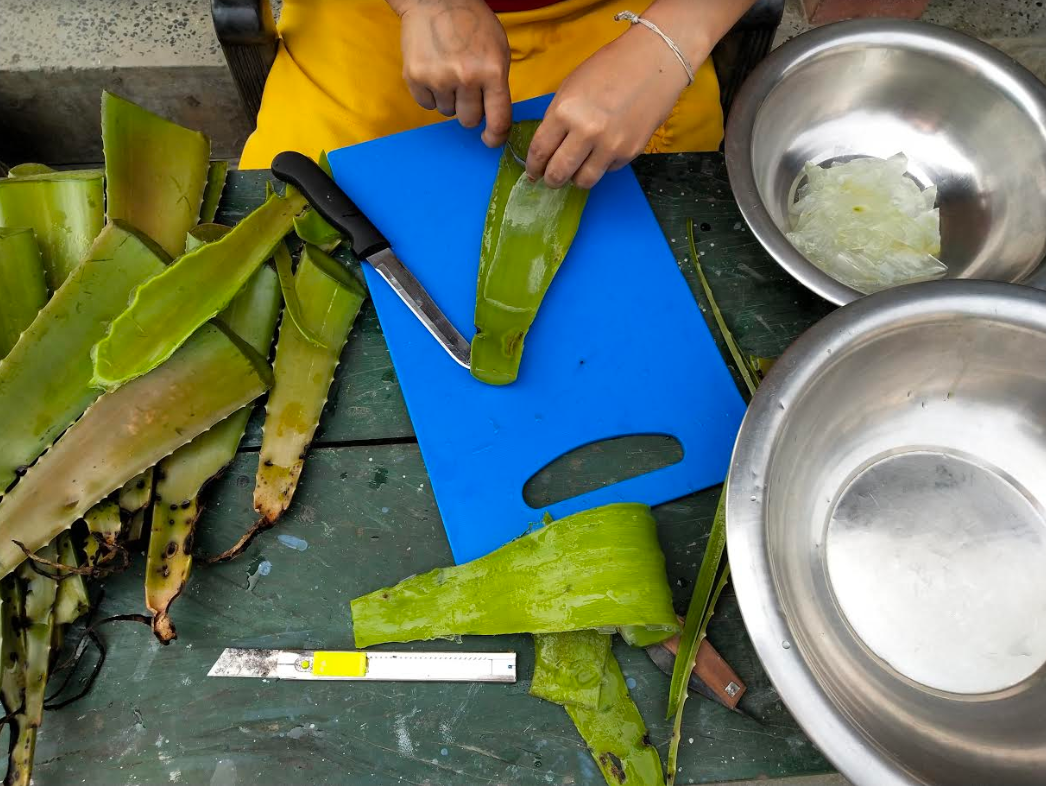 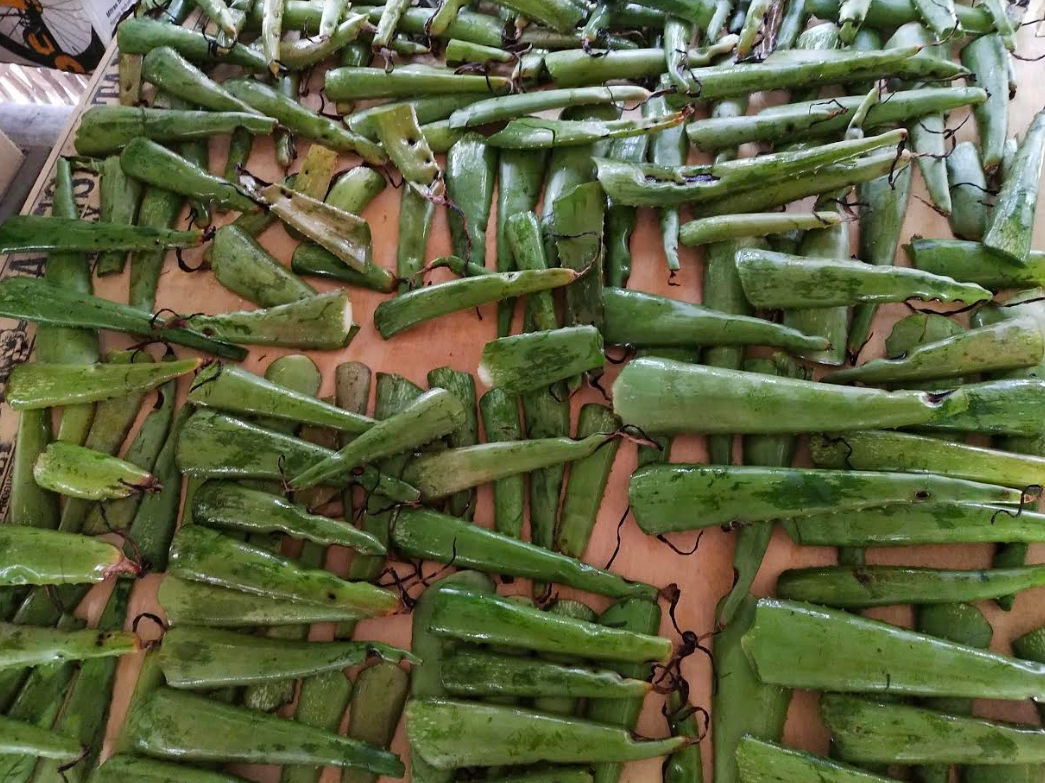 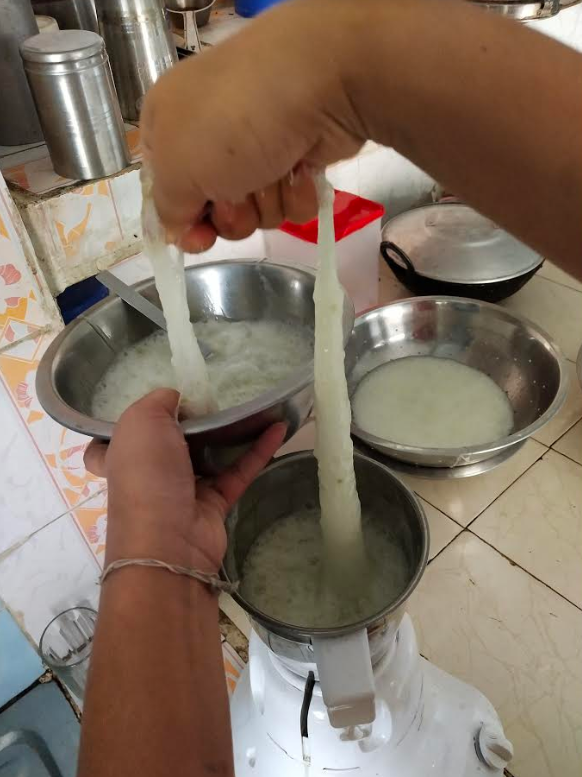 Linda Chhakchhuak is an independent journalist who has worked for several web/print news and features agencies. She is publisher of Grassroots Options, north east India's first magazine on people, environment and development.