NCR is Gasping for Breath

The National Capital Region toxic air is once again thrust upon us, choking one and all. Dealing with the pandemic was bad enough but now we have been subjected to frightening levels of pollution around us.

The past month, I haven’t come across one person who is isn’t coughing or snivelling or recovering from a viral fever that just doesn’t go away. And I am not talking about COVID-19 inflicted patients or their symptoms. They are around as well dealing with their own health issues and problems. The colds and coughs and never-ending so-called indicators has sucked us into a bottomless pit.

Year after year, there is a huge hullabaloo on handling the pollution woes and all that the government is doing to ensure cleaner air for us to breathe in… But, in reality, it is all noise and no action. Diwali comes with a bang and leaves us gasping and breathless.

The craziest thing that I’ve read on social media over the past week is that those people who are against the bursting of crackers are labelled as anti-Hindu as apparently not bursting these ‘poisonous toys’ is against our culture! What kind of insanity is this?

I had a lot of faith in people this year… I thought there would be little or no fire-crackers and that we would have a greener and cleaner Diwali… That the pandemic scare would make people behave in general… But all that went up in smoke literally as the clock struck 8pm… In the distance, the burst of ‘anti-environment artillery’ reverberated into the wee hours of the morning.

As I flung open my balcony door this morning, the stench of burst crackers and the venomous air hit my nose…and through the haze, my trust in the inhabitants of the National Capital Region blew up in my face.

Well done people: let us not worry about the respiratory impact even on healthy people, and serious health impacts on people with lung/heart disease. Let’s ignore the children who are besieged with breathlessness and asthma…struggling to breathe. Bad air quality poses the greatest risk to humans – but no one seems to get it. The deadly particles that are inhaled deep into the lungs directly lead to heart attacks, strokes, lung cancer and respiratory diseases…how do people not understand or get this? And with the pandemic around us, one would think people would be terrified on the effects it has on our loved ones and on ourselves.

What struck me as ludicrous was when some children and even adults went about bursting crackers without the slightest hesitation! Stupidity laid bare! While, I am aware that one of the main reasons for the pollution in our city is the stubble-burning in neighbouring Punjab and Haryana, yet we have not found a solution to this issue. It requires the state governments to sit down and tackle this urgently. Pointing fingers and accusations have not led to a solution and never will.

Most people have lamented that the sale of firecrackers was hit in the national capital this year due to the so-called ban. Why are people’s priorities so warped? This should be applauded not looked down with disdain.

On the eve of Diwali, enforcement teams were seen guarding the wholesale cracker markets of Sadar Bazaar, Jama Masjid, Chandni Chowk, and Karol Bagh. Heavy deployment was seen near godowns and shops, wherever there was possibility of the illegal sale of crackers – yet the whingers complained non-stop. Increased patrolling around neighbourhoods to track any violation was not welcomed.

The latest update indicates that air pollution in Delhi and adjoining areas in the National Capital Region is deteriorating with each passing day, with intoxicated air causing illnesses and affecting people. And the situation is only getting worse. Delhi's air quality has fallen to ‘severe’ category with stubble burning accounting for 32 per cent of city's PM2.5 pollution and firecracker emissions making the situation even worse. Overall Air Quality Index was at 454 at 10 pm last night.

We have no one but ourselves to blame this time. A thick blanket of smog has enveloped several areas across Delhi in the morning, reducing visibility. An improvement in the air quality is expected starting the second half of Sunday, with light rain expected across the capital. Wind direction is expected to change to south easterly, reducing the impact of farm fires on Delhi’s air.

When will we learn and when will we wake up. Inhale… Exhale… But What? This is definitely not what you call clean air!! 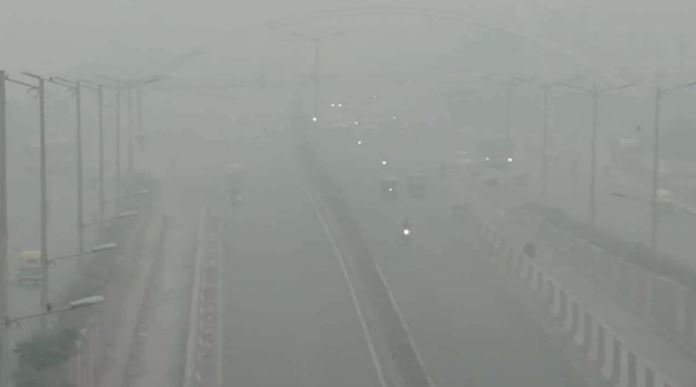