‘People with Disabilities Should Not Be Only at the Receiving End’

‘No one wants to be friends with them’

The people of Jammu and Kashmir have been battling multiple problems for decades. The political dispute has shattered the once peaceful valley. Regular face-offs between militants and the military have left thousands of people with physical disabilities.

Philauri Jaan, a resident of Nepora in southern Kashmir, was shot in her right rib in 1996 during an encounter between militants and security forces. Then 12 years old, she was rushed to Srinagar and remained in a coma for almost two weeks, and due to the underprovision of health services was referred to a hospital in Delhi.

Although doctors there saved the young girl’s life, the bullet that pierced her is still inside Philauri Jaan. A seventh class student when she was shot, she is still bedridden and barely manages to eat or drink by herself.

“We are still fighting for the rightful compensation,” says her brother Mohammed Rafiq Bhat. Initially the family were given a meagre 25,000rs as compensation. “To get that sum of money,” says Bhat, “we had to pay bribes of more than 15,000rs.”

Like Philauri Jaan, there are innumerable people in J&K living with permanent disabilities. Besides political violence, the topography of the region is another major cause that puts people at risk of severe injury.

Aijaz Bhat, a government college lecturer from Anantnag, was returning home from Pahalgam on a rainy day in July 2001 when his bike skidded and he fell from a height of 25 feet. The accident caused a fracture in his spinal cord. “I have been in a wheelchair since then,” says Bhat.

Luckily, he had earned an appointment as a government teacher before his accident, which is proving precious in these hard times. “I have always received love, warmth, and cooperation from my students and colleagues,” he says with a smiling face.

Bhat takes all his classes on the ground floor. It is a major obstacle to many people with disabilities that the structure of most buildings and public places is inaccessible to them, or difficult for them to navigate on their own.

Javed Ahmed Tak, recipient of a Padma Shri award, has run the Humanity Welfare Organisation Helpline since 2003. The organisation opened a “school for special children” in 2008, having begun formal classes in 2006.

“We got financial aid from CRY [the NGO Child Rights and You] which helped us expand our base,” says Tak. He is disappointed that there is no other school for kids with disabilities in all southern Kashmir.

He says that most such children drop out of school every year. The social stigma perpetrated on them prevents them studying with other kids. “No one wants to be friends with them,” says Tak.

Another challenge faced by people with disabilities is reaching schools, given the underprovision of transport facilities. Says Tak, “We hired a car to bring students from far off locations. The J&K Police also provided us with a van.”

With the help of CRY, HWOH also teaches its students visual arts, crafts and music. One of their students, Saima Hussain, is now working in a cultural academy.

Of their work advocating the rights of children with disabilities, Tak says their situation “is even worse than animals.” Many prominent psychiatrists have from time to time suggested that various organisations in J&K set up special centres for people with disabilities to ensure they are not exploited. Rigorous efforts put in by various organisations have led to positive behavioural changes in many children. “Now, people regret saying bad things about these children.”

Although their learning capacity is very slow, says Tak, they are now helping their families.

Tak himself is a victim of serious injuries caused by political violence between militants and government forces. He was pursuing his graduation when he got injured and became wheelchair-bound. This was reason enough for him to start HWOH together with six other people.

He says with pride, “From 2009 to 2014, the Union Ministry of Youth Affairs asked us to encourage our students to participate in games organised by them. Our students have won medals at the national level also.”

Yet his organisation never got any funds from the government of the erstwhile state or the Indian government. He says he sent a project proposal to the Union Ministry of Social Welfare once, but officials there asked him to get a recommendation from the state government. “Our file was kept rotating in the secretariat, but never got sanctioned.”

Indeed HWOH, which also runs public awareness campaigns and medical camps in various parts of Kashmir, has only got help from national level NGOs, he says. “We wrote more than 2,000 applications to various state ministers including successive chief ministers, but always got a negative response.”

“Disability is the least priority for our politicians. We are also humans; we should be part of development so that we can also contribute to national productivity,” says Tak.

He does not want people with disabilities to be only at the receiving end.

According to Tak the Rights of Persons with Disabilities Act of 2016 was not fully implemented in J&K before 2019, but when the Indian Parliament struck down Article 370 it paved the way for 4% reservation in public employment and 5% in educational institutions for people with physical disabilities.

Describing how HWOH efforts have motivated other NGOs like the Jigar Institute in Jammu to work for the same cause, he says “Our intervention is mostly of collaboration with the education department, through which we conduct hundreds of training programs to help teachers teach disabled students at par with normal students.”

The organisation recently began a school in Bijbehara which is fully accessible for all students, with 110 students currently enrolled. It also runs Child-Friendly Spaces with UNICEF in 40 villages of southern Kashmir.

Durdana Wani, a 17-year-old from Srinagar, developed an ailment in her right eye when she was born. Over time the problem started taking a toll on her mental health. While her eyes were treated to some extent at the All India Institute of Medical Sciences in Delhi, the ailment left a deep impact on her mental health. Wani was enrolled in a special school run by the Voluntary Medicare Society in Srinagar.

Says Kaiser Jahan, Wani’s mother, “She initially did very well, but later when we put her in a normal school, a few of her teachers did not cooperate, so we had to put her in a special school.”

The VMS was established by Dr Maqbool Mir in the early 1970s. Mir recalls, “I was a professor in a medical college and there I saw people with multiple disabilities, this motivated me to start an NGO of my own to help them.”

He got help from a friend of his to get trained personnel for the organisation. Initially, he says, the majority of patients had spinal injuries caused by falls, accidents, and firing caused by the political dispute.

Mir strongly believes that people with disabilities need physiotherapy to be brought back to near-normal life. “Just medical care is not enough,” he says.

He agrees that his organisation did not get much support from the government at any level. “I got monetary help from my friends, relatives, and through donations given by the general public.”

The VMS runs a rehabilitation centre also, where neurologists and psychiatrists consult from time to time. It also runs programs for children and some ayurvedic and unani treatments like massages.

“Two of our trainers are visually challenged and they are doing a wonderful job,” he says, “but because of Coronavirus, we have not been able to run more programs.”

Basheer Ahmed Lone, who has worked with the VMS since 2005, says “Dr Mir went door to door for medical interventions, but initially the organisation could not give proper rehabilitation due to lack of facilities. I joined in 2005 and that time we did not have many therapists. Later we gave it the shape of a professional institute.”

In 1996, Mir was able to found a school for children with disabilities. At first the institute had 24 kids and gradually its activities started expanding. “We started as a team of 7 and now we are a team 65,” says Lone. The VMS now has sub-centres throughout Kashmir, in Kupwara, Leh, Kargil, Ganderbal and Baramulla.

Mir says mental disability is a huge problem for many kids, and improving functional roles in these children is the need of the hour.

The VMS also provides home-based programs to those who cannot come to the centres. According to Lone, “Our expenses on one child amount to 5,100rs including transport. The government supports us with a meagre amount, which is not enough to meet expenses for even one month.” 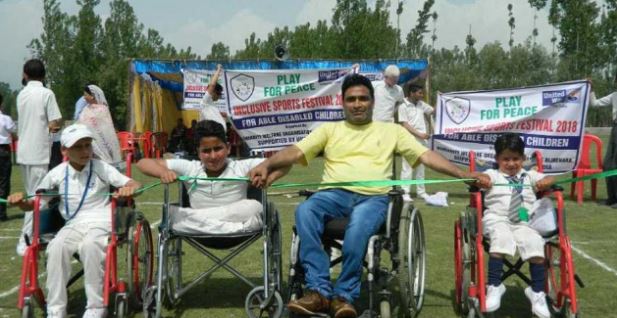