How Kerala Achieved Self Sufficiency in Oxygen And Now Supplies Goa, Karnataka, TN

Kerala first started thinking about oxygen self sufficiency in February last year, when the first wave of the pandemic hit India. Dependent till then on industrial units in neighbouring Karnataka and Tamil Nadu, Kerala moved to generate its own liquid oxygen supply for medical purposes.

"Experts advised us in the initial phase of the pandemic itself that treating corona positive people requires large amounts of oxygen. So, we decided to increase the production of oxygen in the state with a future-oriented perspective. The Central government's Petroleum and Explosives Safety Organisation (PESO) was the major consultant for us in the case of oxygen and it has helped us get a new direction," Kerala's Health Minister K K Shailaja told The Citizen.

"Though the state has eleven Air Separation Units (ASUs), we found five among them to be dysfunctional. Paucity of funds was cited as the reason. We extended all possible steps for revitalizing these and told them to take up oxygen generation for medical purposes as a challenge. Now after a year, all the eleven units are functional, and they have ensured oxygen self-sufficiency for the state while the second wave of COVID-19 poses a severe challenge to the whole country. The timely advice by experts along with the technical backup of PESO has made Kerala the only oxygen surplus state in the country," she said.

Though Kerala's health sector is also facing stiff challenges from the second wave of the pandemic, the state can now supply oxygen even to regions where there is acute shortage.

According to Dr. R Venugopal, Deputy Chief Controller of Explosives in PESO, last year's lockdown had prevented some ASUs from resuming operation as there was difficulty in the purchase of some crucial machine parts. But PESO took the initiative to these machine parts available from Chennai, and all eleven units were made functional through the first three weeks of April last year.

"Ours was a coordinated effort in rallying together all the oxygen plants in the private and public sectors of the state. Augmenting capacity and plugging leakages were our other thrust areas," Venugopal saod. On its part, the health department had procured and stored enough oxygen from the ASUs for future use.

"Like all other parts of the country, Kerala too is passing through a very difficult time in handling the second wave. Hospitals need more oxygen as the number of patients is rising by the day. But we were able to help Goa last week by supplying oxygen cylinders. We are regularly supplying Karnataka and Tamil Nadu at present. Now we are probing possibilities of distributing our surplus oxygen cylinders to other states on a priority basis. I am indebted to the experts who cited the importance of oxygen generation at the initial phase of the pandemic," Shailaja said.

The Kerala Health Minister who got the eyeballs for Kerala’s excellent handling of the first Covid surge, said that the state had put together and implemented a clear action plan insofar as oxygen production and supply is concerned.

In all the ASUs, oxygen was refilled in the cylinders used earlier for nitrogen and argon after conducting the required degassing process. The Health department prepared daily oxygen audit reports and handed them over to PESO.

In the meantime, the state government instructed small hospitals across Kerala to establish 1000 liter oxygen tanks in their premises. " At present, Kerala has the capacity to produce 204 tonne of oxygen per day. The state currently requires only 98.61 tonnes for its patients," said Shailaja.

The largest among the oxygen manufacturers in Kerala is Palakkad-based private firm Inox Air Products. It is manufacturing 147 tonnes a day. The public sector Kerala Minerals and Metals Limited (KMML) started a plant in September last year, and it is producing 7 tonnes per day.

The Bharat Petroleum Corporation Limited plant produces 0.322 tonnes a day while the plant at the Cochin Shipyard produces 5.45 tonnes a day. All the eleven ASUs across the state are producing 44 tonnes a day. Tamil Nadu is getting 74 tonnes daily from Kerala, while the supply to Karnataka is 30 tonnes.

"In the case of oxygen, Kerala has attained self-sufficiency. Now there is a growing demand for more oxygen from the other states. Our plants are functioning at cent percent now, and the options for increasing capacity are being probed. We think the total oxygen requirements will increase in the coming weeks," Shailaja pointed out. 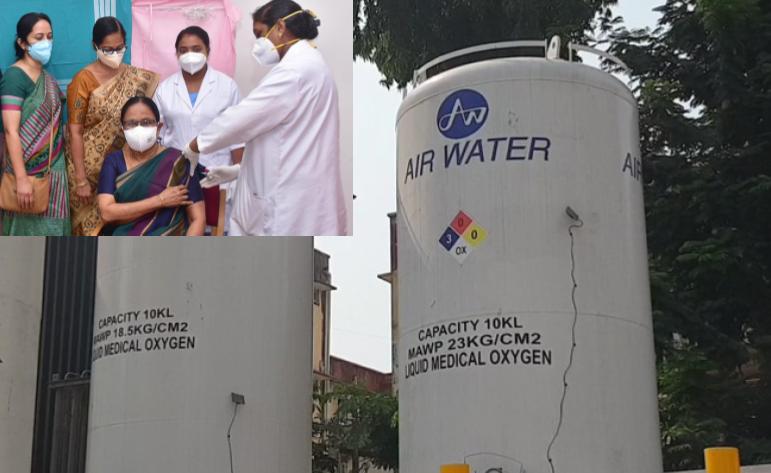