We Are Parted One by One

Maybe tomorrow, my friends and relatives will see my picture in these pages

For a month now, in the morning, I dread turning to page 4 of The Times of India: it carries notices about those who have left for their heavenly abode, mostly untimely, falling prey to the Corona tsunami. A couple of months back such announcements filled a quarter of the page; sadly now the entire page is filled with pictures of those whose innings came to an abrupt end. Sometimes, images of the lost ones spill over to the next page.

Every day I see a picture of a dear friend of decades or a close relative which fills my heart with pain and anguish; an avalanche of nostalgic images roll over my mental screen. I can hear their laughter, whispers and syllables said and unsaid; I can see their endearing smile and unfulfilled dreams floating in their eyes. The wailing of their wives, the sobs of their children shake me beyond words.

Each day, when I see these pictures, something dies within me. A part of me departs with them. When I fold up the newspaper, for a flicker of a second a thought crosses my mind: maybe tomorrow, my friends and relatives might be seeing my picture in these pages. On the wheels of time, whose journey ends where and when? We have neither the red flag nor the green. At night, while fast asleep, the shearing sound of the whistle of a passing train wakes me up like that scene from the film Pakeezah.

One month isn’t a long period in the history of a nation. One month is just a bleep in the life of a person. But one month is long enough for the Corona Tsunami to disrupt and devastate a whole nation, uproot lakhs of lives, kill millions of dreams, shatter the image of a country and bring it almost to its knees. You open any TV channel, and images of patients gasping for oxygen in hospital corridors, long queues of vaccine seekers, told after a long wait there was no vaccine for them, relatives waiting to cremate or bury their dead, people in serious condition being rushed to hospital, many with no beds, breathing their last in the hospital reception!

Courts direct the governments daily to provide required oxygen and save lives. Dead bodies float in the holy river Ganges!

Lockdowns and curfews slapped again, forcing lakhs of migrant workers, hungry and thirsty, with their wives and children in tow, with their meagre belongings on their back to exit the cities which never embraced them; on foot, back to their villages with blank eyes knowing not what is in store for them.

They prayed at the temple of Sankat Mochak Lord Hanuman, he didn’t seem to hear their prayers. They bent and sought help from Baba Bholenath, Lord Shiva, but he was in deep samadhi. Wholly helpless, hopeless, desperate for some help but not knowing where to go, whom to turn to, they look up towards the sky, raise their open hands and hum in faltering voices:

Once their official car, a Mercedes/BMW/Jaguar, carried a small tricolour on its hood and a huge national flag fluttered at the top of the India House: the residence of the Ambassador or High Commissioner.

They spoke on behalf of 1.4 billion people of India and signed agreements on behalf of the Government of India worth crores of rupees. They were addressed as Excellencies in foreign chancelleries. At most international airports, they could pass through exclusive lines for diplomats for speedy immigration clearance, and pick up their baggage and leave without being bothered by customs personnel.

But the pandemic recognises no diplomatic immunities. Beds, oxygen and vaccine starved private hospitals in Delhi, flocked by anxiety filled patients and their relatives to the brim, have no desire or time to acknowledge any diplomatic privileges. A patient is reduced to a mere number. How the Corona virus has felled many Excellencies! In the last few weeks several of them breathed their last in the reception lobby of hospitals, waiting for the allotment of a bed!

We claimed we have not only taken care of ourselves but helped scores of countries outside India. Couldn’t we calculate how many beds we might need in the whole country? Is it rocket science to figure out how many vaccine doses will be needed if we wish to vaccinate the entire population? Didn’t we know that we have just 1.5 doctors for every 1000 persons in India, lower than Bangladesh or Pakistan?

Questions fly left and right in the air but no honest answers, only charges and counter charges and efforts to pass the blame to others. When someone at the ripe age of 45 succumbs to Corona, elderly folks console family members with homilies: they whom God loves die young! Does it mean those senior and super senior citizens who survived aren’t loved by the Almighty?

But we can’t escape the suffocating feeling: many of them won’t have died this time around, if we were able to give them a fighting chance to live. Who knows? Man proposes and God disposes!

In the dark night of Corona, the list of friends and relatives is getting shorter by the day. How many of them have left without getting a chance to say goodbye? Who is next in line in the waiting room?

Ambassador Surendra Kumar is retired from the Indian Foreign Service 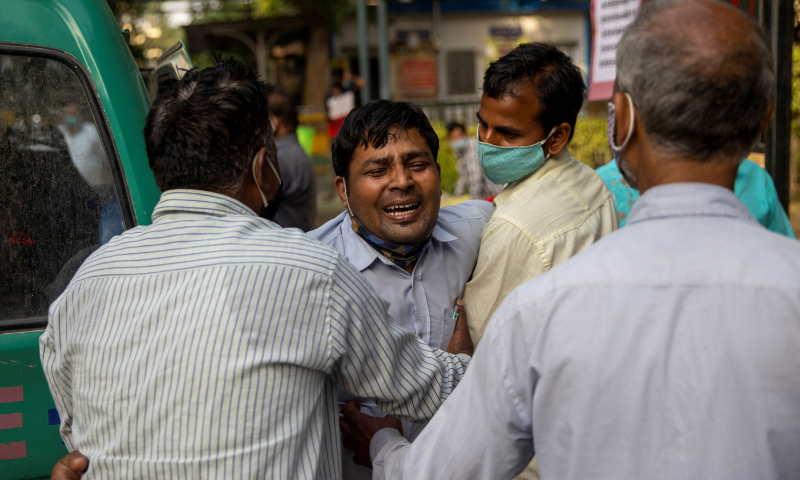