‘Every house I work at, they kept pressuring me to get my shot’

KOLKATA: Ten months after the first covid vaccines were developed, less than half the people of West Bengal have received at least one dose, and only 18% are fully vaccinated according to government figures.

This is not for lack of trying on their part.

Sahana Bibi, who travels to the city by train every morning at 5, is a domestic worker in seven households in a south Kolkata locality. She says that having to wait for her first dose presented a real problem.

“Every house I work at, they kept pressuring me to get my shot. They had all received theirs, so they could not understand why I was not getting mine,” she tells The Citizen.

Sahana Bibi lives in Ghutiari Sharif in suburban Kolkata, managing a family of four - her mother and two teenage children - on her income alone. Her husband passed two years ago.

She explains that getting the dose was not that simple for workers like herself. She spends her working hours in the city, while her vaccination centre was in her own district.

“And even then, the lines were really long. Had I gone in my own district it would have been a very time-consuming process.” The health centres quickly ran out of vaccines, she recalls, and all the residents of that particular district had to wait for the next batch, which was then allocated to the elderly.

As a result of the botched nationwide vaccine rollout, it is estimated that the vulnerable 60+ group have received only 102 doses per 100 people.

When the first batch of vaccines arrived at health centres in the city, the Kolkata Municipal Corporation opened up vaccination to all age groups. Then as the supply from the Centre began to dwindle they were forced to restrict it to certain groups.

As Sahana Bibi travels every day into Kolkata by public transport, her employers were all apprehensive that she would contract the virus during her travels, with most of these households being joint families. Under pressure, she decided to try her luck at the health centre near her place of work.

But “they would not allow someone from another district to avail the shot here,” she states, which threw up another roadblock. With supply steadily decreasing, the rules were made more and more stringent at these health centres.

Now most people would need a vaccination coupon, with address proof to show they lived in that district, in order to be “eligible” for the jab.

So it was only last month that Sahana Bibi was given her first dose, through one of her employers, who got her a coupon using their own documents.

“We had to go and stand in line at 7 in the morning,” says Tapas Puley, 29, who works as a driver for a family in Kolkata. His wife and he were only able to get their vaccinations late August, when Puley recalls the line at the vaccination centre in Ward 95, Tollygunge, was hours long and moving slowly.

“Halfway through one day, they ran out of shots and sent everyone back!” Adding to the complications in accessing this public health necessity, he says his wife hails from a different district and it was difficult being able to use his address proof for both of them.

Their next shot is scheduled for November, and he expects delays then too.

“I could not afford to go and try my luck standing in line every day because I had to go to work,” he explains.

He says he drove his employers to get their shots months before he was certain of his own.

Another reason the process has been taking so long is that the Kolkata Municipal Corporation health centres require people to be registered on the CoWin portal by the attendants there. Not only those who do not have the internet access or facility to register themselves - everyone.

“The thing with Kolkata is that, most of these people come and settle down here for work. Their livelihoods are set up here in Kolkata but their documents prove that they are residents somewhere else.

“People are having to find other means to go and get their vaccinations, or they are having to wait for when they go back to their hometowns, by which time there may not be any left for them,” says Puley.

His parents who live in Andhra Pradesh aren’t yet vaccinated either, like 83% of that state’s people. “I don’t know when or how my mother and father are planning to get vaccinated,” he tells The Citizen.

It has been dramatically simpler for those who can afford vaccination at private hospitals. In the early months of the nationwide vaccine rollout just a handful of hospital chains were reported to have cornered almost the entire supply made available for purchase.

Therefore, when the supply shortage hit Bengal, and the government was unable to launch the universal program in June, the people availing free vaccinations under the KMC were hit hardest.

Meanwhile the government had announced certain priority groups who were liable to be superspreaders, including jail inmates, street vendors, hawkers, sex workers and daily transport workers. But many domestic workers and security guards in apartment buildings, and other such workers in the New Town area have yet to receive their first dose.

While most health centres in Tollygunge are wrapping up the rollout of the first dose, there have been vaccination camps being set up in Salt Lake under the Bidhannagar Municipal Corporation, which is prioritising domestic workers and others who come in close contact with multiple possible sources of infection.

“I decided not to go until the crowds thinned out,” says a rikshaw puller in Paddapukur, Regent Estate, who is known in the area as Mithun Da. He says he took lightly the risk of not getting the shot. He also points out that many people stood in line for hours only to be sent home when the vaccines ran out.

“This happened on more than one occasion,” he says. He says his wife is yet to go and get herself vaccinated.

Now, with a third wave looking imminent, it is clearer than ever that more vaccines need to be procured and administered swiftly. The state government claims that as of yesterday 75% of Kolkatans had received at least one dose.

It is the remaining quarter, from surrounding districts and who tend to include many labourers, street vendors, and daily wage earners, who are relying on publicly provided vaccines and risk being missed out.

Chief minister Mamata Banerjee in a statement to the media blamed the Centre for not sending an adequate supply of vaccines to West Bengal that would enable the state to reach these vulnerable and marginalised groups.

Many may lose their livelihoods if they are not allowed to work without being vaccinated.

Ratan Das gets asked about the vaccine a lot. A paan stall owner in his 30s, he puts up shop at the corner of a busy traffic intersection and has a loyal set of customers. Since he prepares the paan and other snacks for them at close range, the question whether he’s got the jab surfaces a lot.

He says the problem is simple to explain. There were no vaccines left at the district health centre. He had no luck during the first rollout, and “When the next batch came in, we had to go and stand in line again.” They were sent back home 30-40 minutes later.

A lot of people he knows have been facing the same problem.

He asks, “What vaccine will they give us if they have nothing to give?” 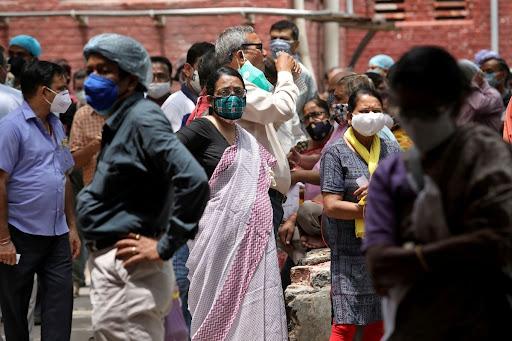