'Anything We Could Sell for Money, We Sold to Save My Dad. We Even Put Our House for Sale'

KOLKATA/ NEW DELHI: It was before the pandemic that a leaked government survey showed how household expenditures had declined in India for the first time in four decades.

Now after millions of deaths and a series of harsh lockdowns amidst inability to control the infection, another National Sample Survey released recently shows that 35% of rural and 22% of urban households were in debt in 2019, each family owing Rs 60,000 and Rs 1,20,000 respectively.

Given the stingy public assistance to households since the pandemic, the latest GDP figures show that people’s income, expenses and savings continue to fall, and business investment too.

The Citizen spoke to a number of people who are in financial distress because of medical expenses, disemployment and income loss, and ongoing debt since the pandemic struck.

Sahely Saha*, 20, now runs the small general store attached to their residence in North 24 Parganas. “My father had been running our shop for decades. Everyone in our colony knew him by name,” she recalls.

The pandemic hit in her second year of college and she was consigned to the ritual of doing her classes from home, on the phone.

Saha says that they had been apprehensive from the very start of the pandemic, since her father’s job required him to come into physical contact with a lot of people.

“Previously I went to college during the day, and sometimes sat with Baba at the shop in the evenings. He didn’t need help but I enjoyed lending a hand sometimes.” Now she runs the shop on her own, with some help from her aging mother.

“Covid took him very suddenly, at a time when we were getting news of people dying everyday.”

Her father Subhash Saha, aged 71 died within a week of being hospitalised. The treatment and hospitalisation did not come cheap. Meanwhile sales had plummeted because theirs was a physical shop, and they had to borrow money from long-standing customers and business associates to wrangle the initial two lakh rupees for his treatment.

The banks were a dead end. “His condition was worsening and we would not be able to get a loan approved in time, if at all.. Moreover, we were already looking at repaying the loan that my father took out for me to take up commercial studies at college.”

Before he was hospitalised, the doctor from a local clinic suggested that they arrange oxygen for him.

“At the time one of the cylinders was costing us 20,000 rupees - and to be on the safe side we arranged two.” They had expected that to be the extent of their expenses.

The shelves in the Sahas’ general store are nearly bare now, the wares having dwindled to less than half. “Some old and trusted suppliers still distribute to us but we lost much business.”

“He was here for when the first batch of sanitisers came into our shop,” Sahely Saha recalls.

She has had to discontinue college to manage the store full time, her mother never having gotten used to running a store. For the first few months she tried to attend classes from her perch at the front of the shop, but soon felt it was becoming a moot exercise.

“Right now I am more worried about repaying the loan my father took out for my education, than the education itself,” she tells The Citizen.

“The people at Jaipur Golden are thieves,” says Gunpreet Singh, who spent 60,000 every day when his father was admitted to the Delhi hospital. “The government had set a limit of 18,000 for hospitals, how can they still charge us so much?”

Singh says nothing was included in that hospital fee. “They had made this a 5 star hotel, with different charges for everything including meals, nursing, medicines.”

His father, the main earning member of the family, was one of the 21 patients who died overnight at the hospital amidst a serious oxygen crisis.

“The doctors kept saying we have everything, including hospital beds, plasma and medicines, just to admit your patient. There was nothing at the hospital and we had to arrange everything. We left all our jobs and were just there spending money to save my father,” said Singh.

He arranged for this money by asking help from his relatives and by selling family assets.

“Anything we thought we could sell for money, we sold to save my dad. We even put our house for sale because we needed the amount immediately.” He says they ended up spending Rs 10 lakh in those few days.

The 28 year old and his family are still struggling to pay back his relatives, and the interest they have accumulated.

“I have been getting suicidal thoughts because of the debt I have accumulated.”

“This was the first time in my life that I was facing a financial crisis - sorry, am facing - since it is still ongoing,” says Pranoy Dey, 34, who lost both his parents in the second wave.

As the only breadwinner in a family of five, he says that as a sales executive they were not able to live lavish lives. He moved to Kolkata from Malda since his sales route was in the city, but since his is a field job, after the lockdowns his employer cut his salary by almost half.

So when his parents caught a fever and developed dry cough, and consequently tested positive, he found himself in the trenches.

“I had no other option but to ask my manager for two months’ salary in advance - but he was able to grant me only a month’s worth. Still, I appreciated that.”

He took out a bank loan of 5 lakhs for his parents’ treatment, to be able to admit them to a hospital.

“We could afford what a lot of other people could not. This was also new for me. After about a week in the hospital the charges started to pile up, and the loan amount started depleting very fast.”

“My parents never had health insurance, and the insurance from the company would not cover the employees’ parents, only the spouse and children.”

Dey says that the month or two after his parents’ deaths was particularly difficult to get through because they were still bearing the costs of treatment, at a more urgent degree now, after their passing.

“The different charges at the hospital, funeral arrangements, all of these things had to be paid out of my meagre savings because my income was almost at a standstill, and I had already asked for a month's advance and spent it all.. I had not calculated or anticipated a scenario where my parents died and I had to deal with the aftermath. In hindsight it was silly and I should have.”

Dey does not know how he will begin paying off the loans. Moreover, he worries that with his son nearing school age he will not be able to provide him with a good education.

“I cannot ask my son and wife to starve themselves today so I may be able to repay a loan. You cannot say that.”

“We had a case of a girl who was hospitalised for the 95% burns she had sustained in a accident, and was detected Covid positive during that treatment,” recalls NGO volunteer Subhrodeep Roy.

“Once she tested Covid positive, she had to be shifted from around between three to four hospitals, because not all of them were equipped to isolate and handle covid patients.”

It was an accident of a stove exploding in the kitchen at the household of Nandan Basu*. His daughter, about 30 years of age, was in the kitchen cooking at the time. She sustained serious burns all over her body and was taken to the hospital immediately for treatment.

Basu is a migrant labourer who was living in Amta, Howrah at the time with his daughter and her infant.

Shuttling his injured daughter through hospitals became extremely daunting. And so Basu brought her home, in hopes that he would be able to care for her himself at a lower cost.

After recruiting the help of an NGO, he was able to raise about 2 lakhs for treatment, and they also delivered the medicines for her burns to their home in Amta.

“Even though the burns were severe, she died of Covid. And one of the reasons must be the lack of adequate care and the family’s inability to access it.”

“After she passed, Nandan called us up to say that he would like to donate the medicines back to the non-profit, so that the next burn victim may get medicines a little more readily than his daughter did, should they need it.”

Basu did not qualify for any loans, and even if he had there is no way he would be able to repay it, says Roy.

Basu is now trying to keep his small family afloat, while also trying to make up for the blow his daughter’s medical condition took on their finances, as they grieve her loss. His wife and grandchild depend on him financially.

23 year old Gaurav Gera’s parents had to be rushed to hospital after contracting Covid during the second wave amidst heavy shortage of hospital beds and oxygen supply.

Gaurav lost both his parents due to oxygen shortage. He is now struggling to live with the debt incurred for medical care while trying to save them.

“The doctors had asked to first buy Remdesivir injections and I spent rupees 5 lakh arranging them for my father.” Gera sold his father’s auto and used up all his savings to pay for the injections.

Gera, who also has a younger sister, is the sole earning member now of his family of two. He earns 14,000 rupees a month.

He takes care of his sister’s education and is also paying back the money he had borrowed from friends and family to try and save his parents. 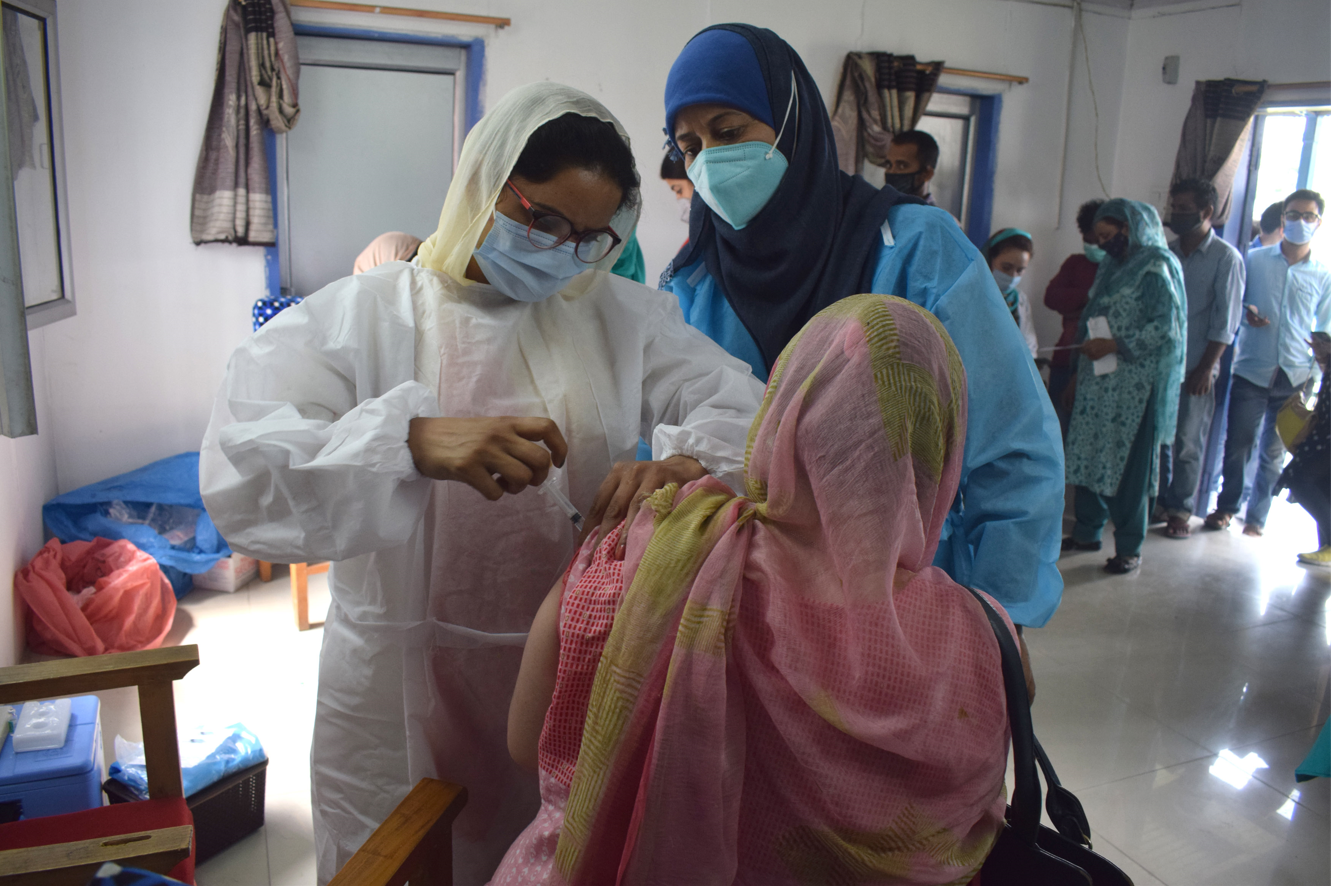