In the latest count, Mizoram has reported 241 new cases as of Thursday, with the active caseload standing at 1,40,143 covid cases in the state, with 44 children infected. This amidst the amendments imposed to the Mizoram Essential Services Maintenance Act as a response to the doctor’s strike held last week.

The Mizoram Essential Services Maintenance Act of 1990 lays down the definition of ‘essential services’ and empowers the state government to’ prohibit strike in certain employments’ - and this includes staff connected with the maintenance of hospitals, dispensaries and sanitation, and public health care providers in general.

After the ban imposed on strikes by health care workers in Mizoram amidst the still rising cases of Covid-19 in the state, the National Health Mission Employees’ Union called off the indefinite strike that was undertaken on Friday, December 17.

Health Minister Dr. R Lalthangliana stated that the government would meet the NHM staff on their demands for regularisation of employment, medical reimbursement and transfer travelling allowance, and also look into the matter of employing more staff in the upcoming recruitment for the Health Department of Mizoram.

The Director of the National Health Mission, Mizoram, Dr. Eric Zomawia, who was on leave during the commencement of the strike due to health reasons, told The Citizen that regularisation of employment has been a demand from the NHM staff for a while now, “And they have recently started asking again.”

“The regular staff has got a lot of advatages - such as pensions, etc. So they are asking the government to either regularise them, or give them advantages or preferences. And they believe that if any vacancy comes up, then they should be given preference,”Dr Zomawai added

Regarding the legal backlash these health sector workers could face he said, “These are regular demands….The Health Minister has assured that he will look into it, and that is why they have called off the strike.”

The penalties for not abiding by the amendments includes imprisonment for a term which may extend up to one year, or a fine which may extend to the amount of Rs 2000, or both. The amendment made to the Act in 1995 details - “Any person who commences strike which is illegal under this Act, or goes or remains on, or otherwise takes part in, or otherwise acts in furtherance of a strike, or knowingly expends or supplies any money in furtherance of a strike which is illegal under this Act” shall be eligible for the aforementioned penalties.

Once implemented, the ban on strikes only holds for the next six months. The Minister for Health, Mizoram, Dr. R Lalthangliana has said in a statement that he will undertake measures to meet the needs and demands of the NHM staff.

R. Lalramnghaka, Health Secretary, states that the state government has so far promised to look into the concerns presented by the NHM staff.

In March this year, the central government, the Mizoram government and the World Bank of India have signed for a $32 million Mizoram Health Systems Strengthening Project to improve the quality of management of health services in the state. This project in its objectives had listed the benefits it would hold for the health sector staff - to strengthen the management and planning as well as build clinical skills and competency of workers. This loan from the World Bank and the International Bank for Reconstruction and Development, matures in 14.5 years and has a grace period of 5 years. 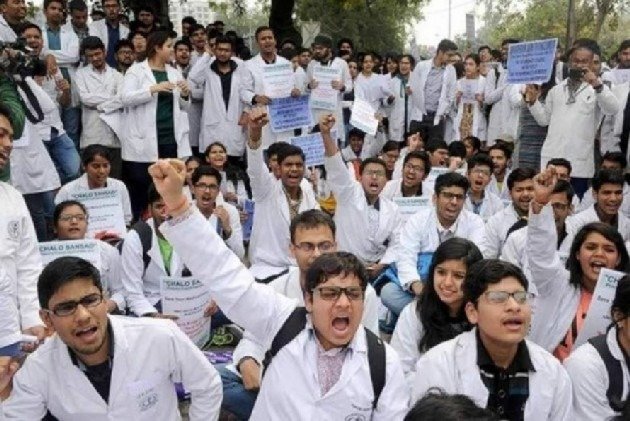