Art is omnipresent, and many a times translated into triptychs of canvas, paper, paint and earth. But it is only seldom that parcels of art are brought together under one roof. India Art Fair is one such annual event that brings the best of Contemporary and Modern Art in an amphitheatre of temporarily bedecked walls, facades and boroughs.

As one walks past the hustle bustle of a crowded boulevard, one approaches the entry of NSIC grounds in Okhla New Delhi that hosts this four-day art event. One can see a sprawling facade design by Artist Sam Kulavoor, celebrating the everyday life of people, adorning the outer walls of the Art Fair, with Bookshops and Cafes adding a fresh winter morning effervescence to the affair.

With over 80 galleries and institutions presenting the best of Indian, South Asian and Global Art, the event is an experience for every art connoisseur. The Art Fair is not only a place for a series of beautiful art pieces, but visual voices speaking about life, politics, culture, gender, religion and society.

The Fair has over the ages become a space to bring varied philosophies, cultural experiences and political dialects in a bustling and growing art colony in the South of the capital city, Okhla, which is quickly emerging as the new art destination. The Fair’s director – Jagdip Jagpal points out that the art fair has grown over 12 years by building on gallery participation, public programming, consistently creating a spotlight on South Asian and Indian art. 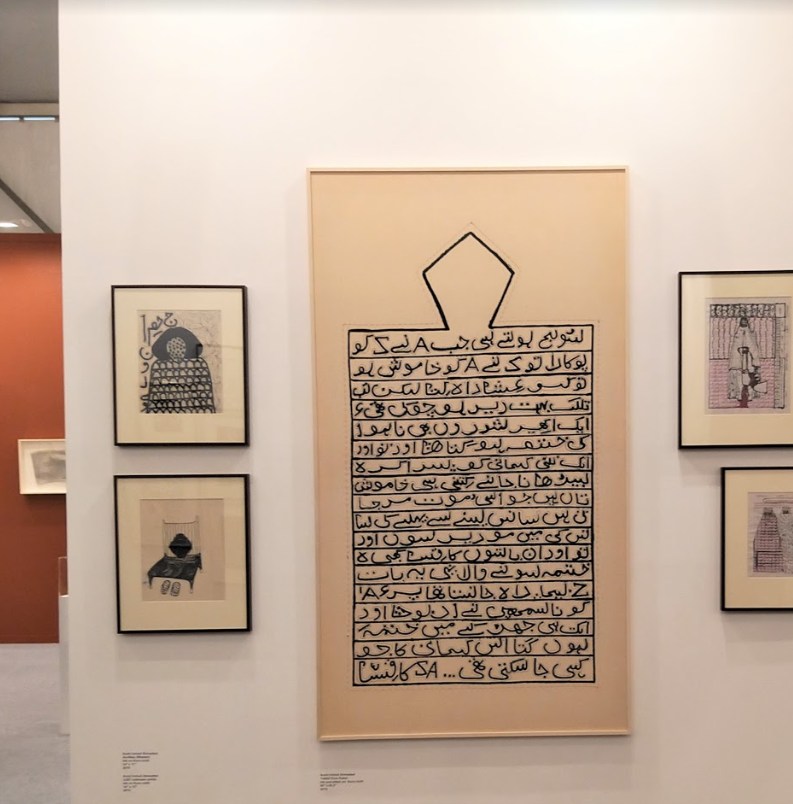 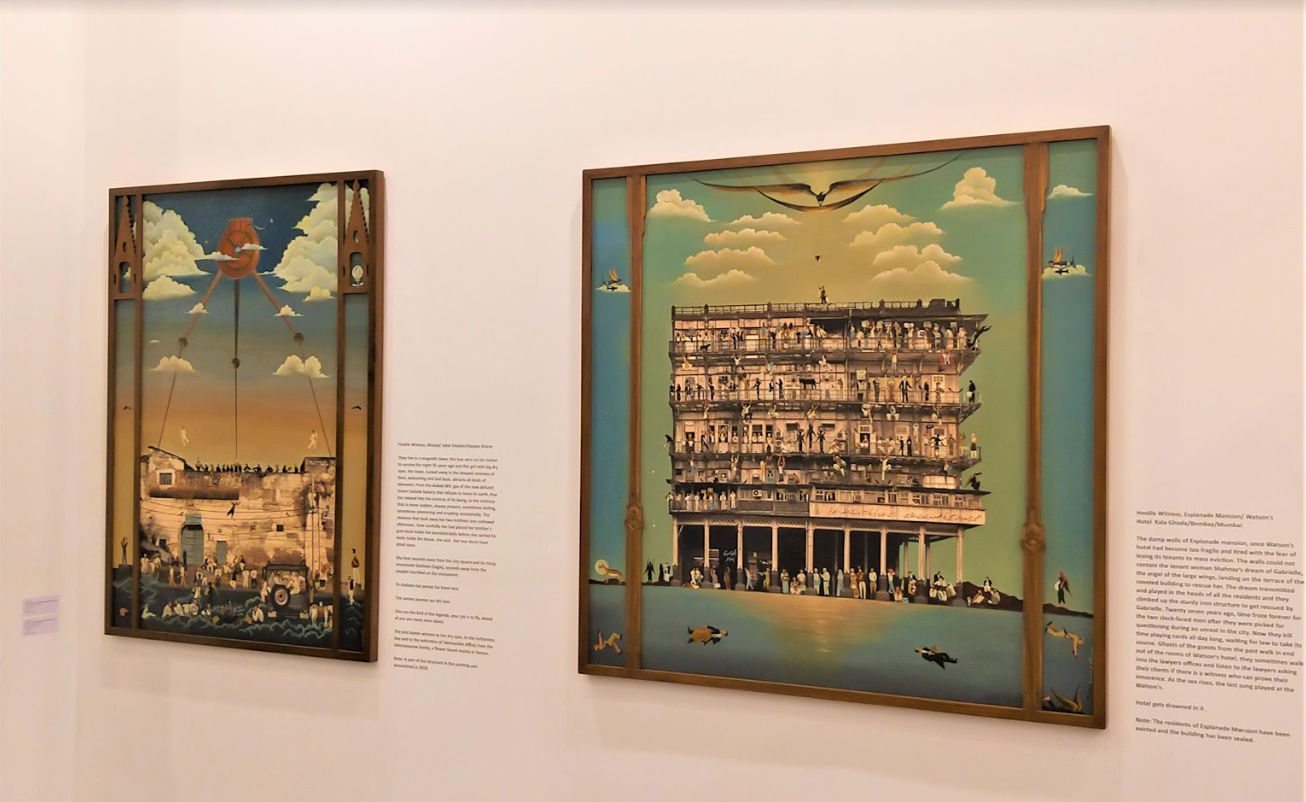 Other highlights of the Fair included FOCUS: showcasing significant solo exhibits by participating galleries, PLATFORM: a popular part of the fair acting as a catalyst for new and emerging artists. Also exhibiting under Institutions, leading cultural foundations like Kiran Nadar Museum of Art, Foundation for Indian Contemporary Art, Serendipity Arts Foundation and Korean Cultural Centre could be spotted at IAF. 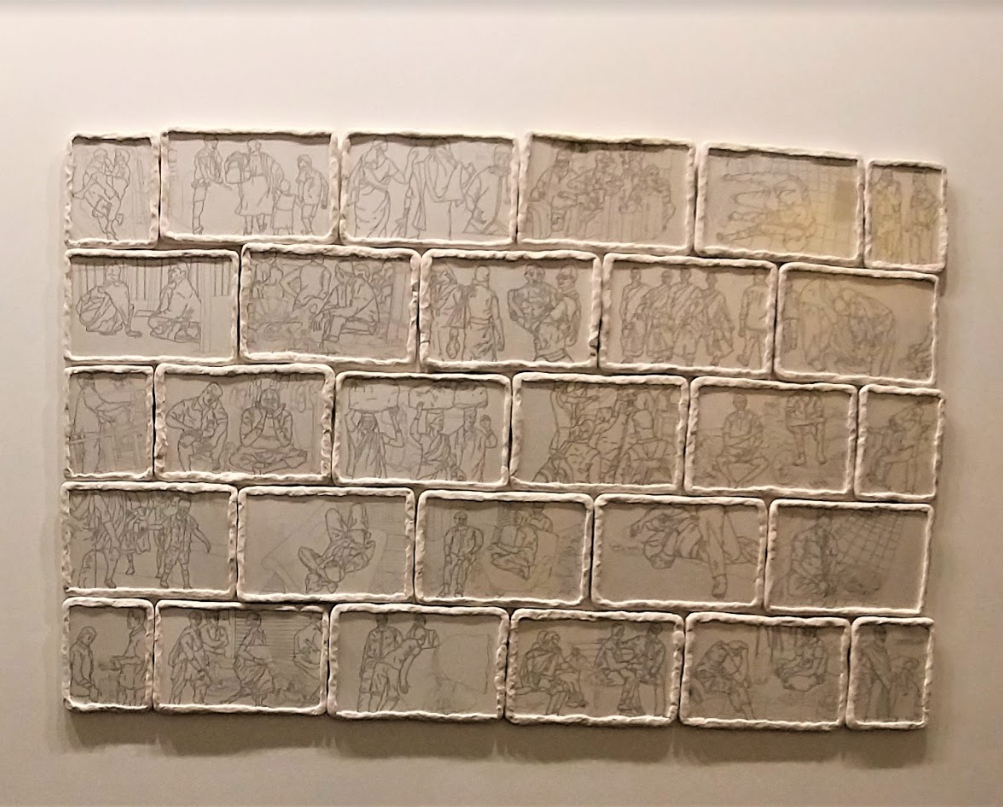 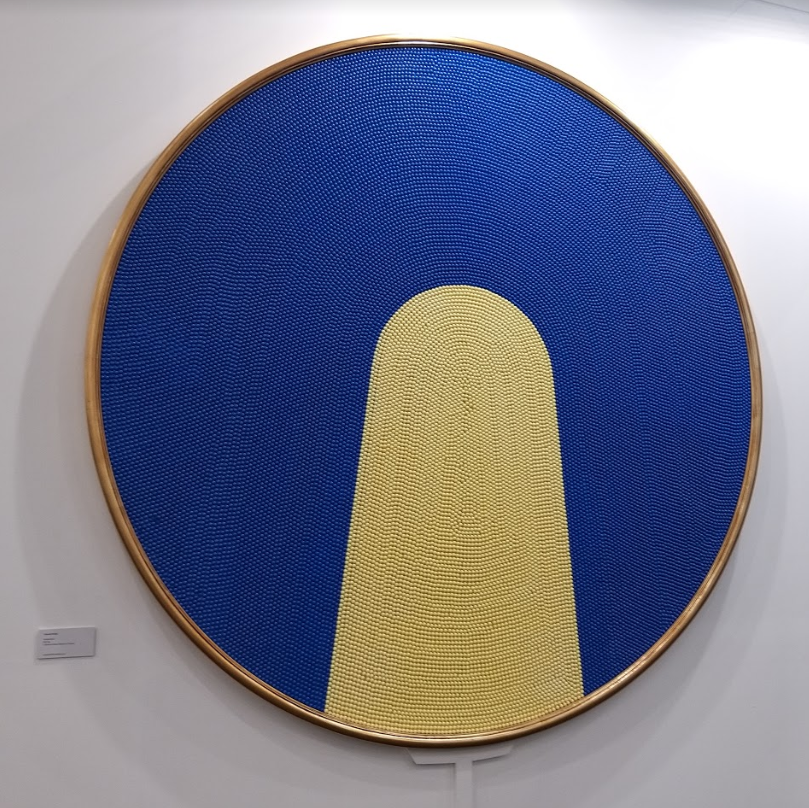 We walked across streams of people, photographers taking pictures of art works and artists, artists interacting with art connoisseurs, glance of conversations of a political life, of society, a rendezvous with art works by masters of Indian Art; rows, columns and blocks of uniform yet diverged art spaces, show stopping art pieces like the art car by BMW in collaboration with renowned artist Andy Warhol, and an arena of art prints, books and cups of coffee all becoming characters in a theatrical drama under the affable sun of a winter day.

A queue of art booths, led one in and out of well laid out walls of art. Art works by Indian modern Progressive Artists like MF Husain, FN Souza, SH Raza, SK Bakre, HA Gade framed the soul of the fair with their visual ideas of society, aesthetics, colour and politics, large mounds of sculpture, mobile art works, photographs, traditional Pichwai Paintings created a lurid amalgamation of history and culture.

Some noticeable sculptures were Sweet Days of Summer 2 by Tapasya Gupta, Tree 2019 and others by Art Pilgrim’s Dhananjay Singh, and Rathin Barman’s large scale installation inspired by defunct colonial style buildings in his home city. Composed of sculptures, drawings and placement of objects, the project will look at how centuries-old, heritage sites have been transformed by growing number of locals and immigrants who inhabit the space.

Art is the visual language of dissent, free speech and free thought, it also eloquently highlights the fails and negatives plaguing a society or a political setup. The Art Fair which was happening in proximity of the Anti-CAA-NRC protests also became a visual space to show dissent by several artist. One such work by Artist Mithu Sen, where she created a collage of 50 drawings, with red being the dominant colour, questioning democracy and the rejection of free speech in the country today. Artist Probir Gupta through his work demonstrated his activism through ‘A Poem of Instruments’, paying ode to the women of Shaheen Bagh. 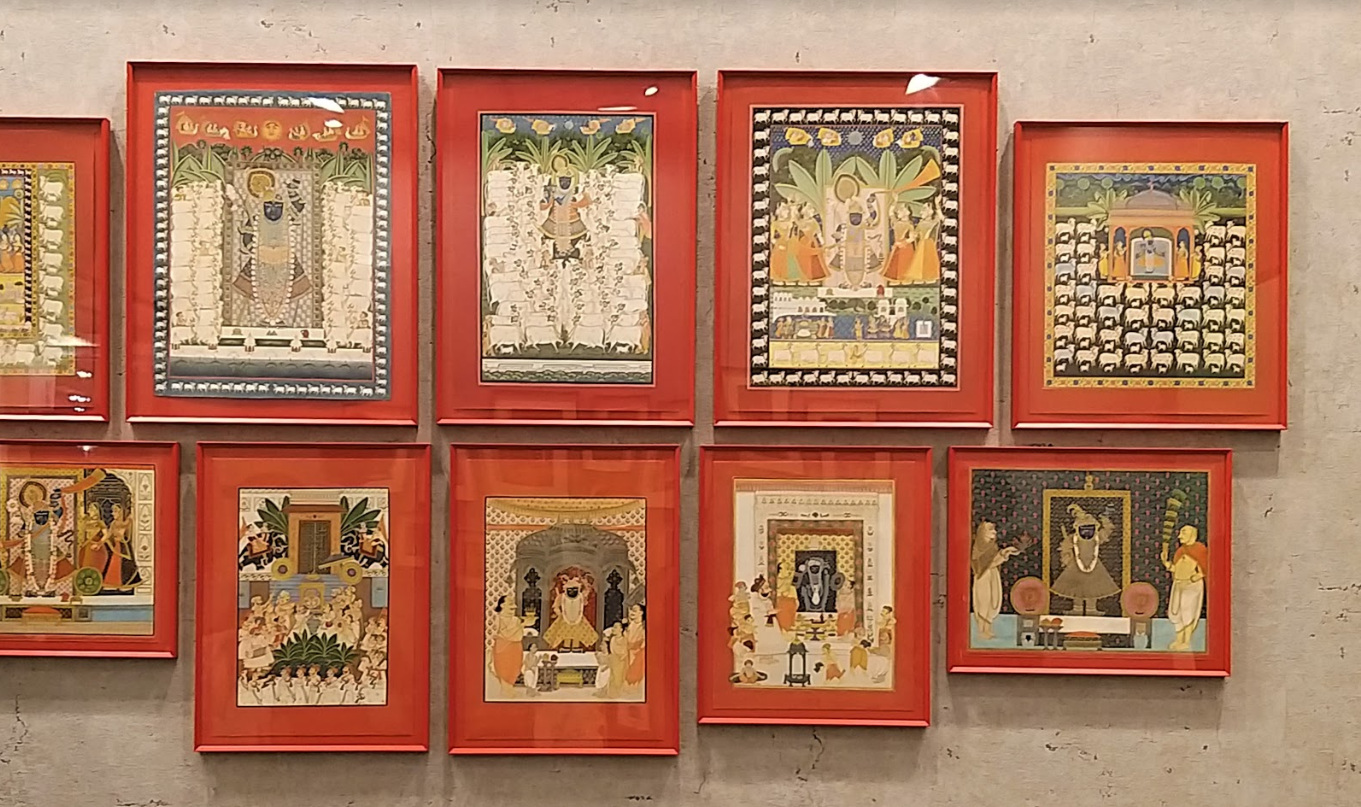 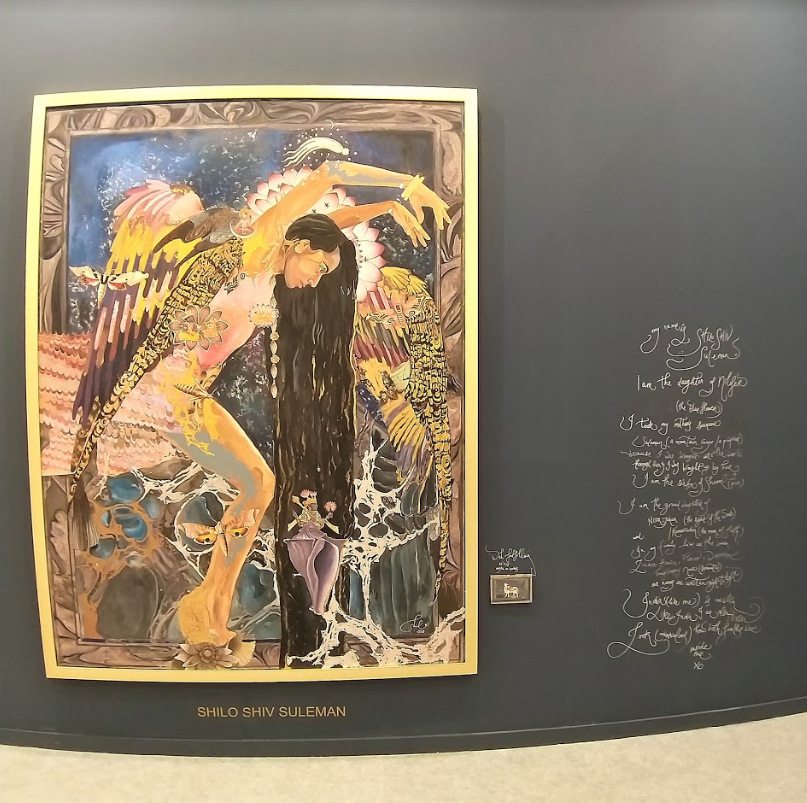 Some more art works that captivated our imagination through their visual voices, noteworthy stories and rich aesthetics:

Metta Contemporary’s Booth had striking works by artist Poonam Jain: her work Burden of Proof are a series of drawings piled together, one can see people etched in these bricks. Yogesh Barve’s work Cleaning at Metta Contemporary used a range of materials including found objects, mobile devices, Cleaning becoming the art of removing unwanted substances such as dirt, infectious agents, and other impurities from an object or environment, the process occurring in different contexts using various methods.

Death by Selfie at PHOTOINK by acclaimed photographer Martin Parr, a series of photographs that drew inspiration from India’s obsession with selfies.

Photographer-Artist Ketaki Sheth’s project Twinspotting at PHOTOINK, where she photographs Patel Twins in UK (her country of residence) that she counterparts with Patel twins in India. The Project is a study of the Immigrant experience and the homeland which divulges the issues of personal and cultural identity. 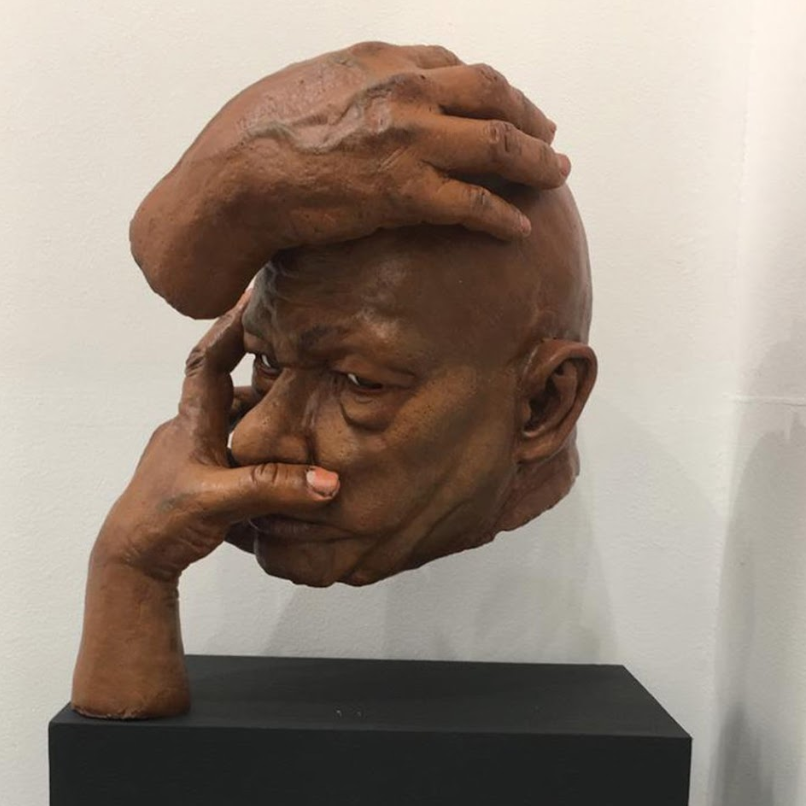 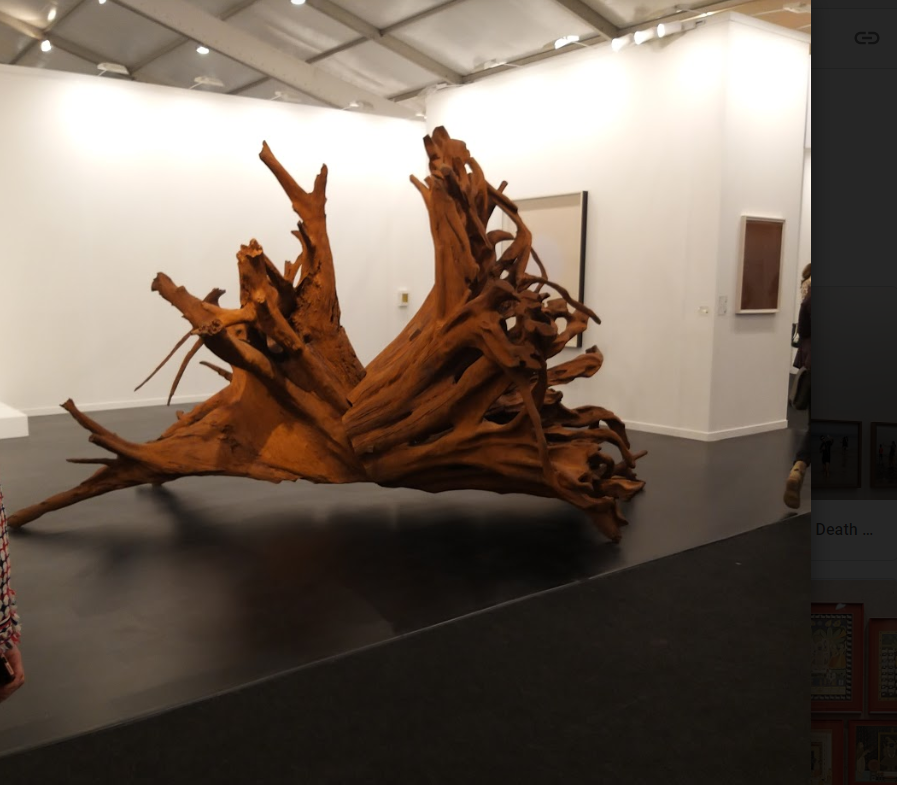 Arshi Irshad Ahmadzai’s Takhti from Kabul, is an ink and stitch work on Kora Cloth.

Seema Kohli’s The Golden Womb Series at Gallery Veda’s booth, exploring the themes of beauty, sensuality and spirituality expressed through her works based on the concept of Hiranayagarbha or The Golden Womb from which we have emerged.

The Sundry Effect: The stories we are… at Gallery Ragini The exhibition brought together 15 different story trails charting out our realities today from the farmer related stories by Thukral and Tagra, climatic collapse by Vivek Vilasini, the ayahs who left India after Independence by Cathy Lane, the hundred portraits of the Kashmiris by Veer Munshi and the story highlighting Varanasi by Gigi Scaria amongst others. The show juxtaposed the dust of Delhi with eclectic portraits, interspersed in the show were sound installation, painting, sculpture, photography and film works.

The Public Life of Women: A Feminist Memory Project by Nepal Picture Library. The Project is a bringing together of a series of pictures of Nepali women with instances from the past when women have taken on political struggle, addressed assemblies, paved new paths through education, published and shaped opinion.

Ganesh Selvaraj’s Approach Without Your Preoccupied Knowledge, a Paper on Board work that plays with density and levels to achieve variations in structure. The sculptural structures created are aesthetically satisfying, that one may approach without one’s preoccupied knowledge.

Some Artworks part of another Parallel Show: The Idea of The Acrobat by Nature Morte Gallery at Bikaner House –

Reena Saini Kallat’s – Verso-Recto-Recto-Verso installation. The artwork comprises of textual scrolls rendered using the tie and dye process by artists in the town of Bhuj. The scrolls present the preambles to the constitutions of countries politically partitioned or in conflict such as: US and Cuba, Croatia and Serbia, Sudan and South Sudan, India and Pakistan, China and Japan, amongst others.

Several Artists part of the fair became voices representing people part of anti-caa/nrc protests, with their powerful show of dissent through their art, while others like Shilo Shiv Suleman joined the protestors at Shaheen Bagh and engaged in painting murals on site.

Art is the voice of the people, of artists and people who are represented by art forms and voices of art: distressed farmers, the LGBTQ community, varied minorities in terms of regions, religions, gender, occupation. Art highlights the struggles of various communities, giving the definition of struggle an aesthetically satisfying language and lending support through its gentle yet rebellious character. Art pieces become noticeable voices through colour, form and its never to be missed juxtaposition of visual messages, one which a viewer can interpret, re-interpret and recognize.

The annual India Art Fair was a success in terms of what it wanted to say collectively about people, art and life, and individually through very different sets of artwork, coming together to speak about free thought and the power of the same invested in every creative activity. The removal of free thought will give us no art, no artists and no art events, but only a society which succumbs to fear, autocracy and mediocrity.