The Potters of Bonn Mir, and the Gufkral Neolithic Cave Site

'It used to be the image of our culture'

PULWAMA: Bonn-Mir-Hurdumir, which used to be among the leading pottery craft villages in south Kashmir, is also home to Gufkral, a site dated by archaeologists to the Neolithic period around 3000 BCE.

Gufkral (guf - cave and kral - potter) is a series of caves located some 5 kilometres from subdistrict headquarters in Tral, in the district of Pulwama. The people who live in the Bonn-Mir area today moved there after vacating this historical site.

The 16 or 17 families who live here have long been associated with the craft of pottery, their traditional work which continued from generation to generation even after they started living outside the caves.

Hilal Quadri, a resident of the Bonn Mir area of Hurdumir, says he has heard from family members that everyone in Bonn Mir (Gufkral) used to be associated with pottery, and “100% locals would work in making the pots to sell them and earn their livelihood.”

But with each passing day, he says, the local people are distancing themselves from this traditional work, “particularly due to the negligence of the government, and partly from a lack of awareness.”

“My grandparents were potters and imparted this precious work to my parents as well, who are still out making the pots, but keeping in view the latest trend in the markets, young boys are keeping their distance from it, which may put an end to this craft,” says Quadri. “It used to be the image of our culture.”

His father Ghulam Qadir is busy shaping pots on a wheel, and full of confidence says he will go on making these pots as his parents used to do.

“We were getting a lot of customers till many years back, and would sell a good number of pots. With each passing day, the customer preferred to buy the latest technology pots in the market, but we never left our work and continued it. But the young generation of ours doesn’t want to work on this craft, in view of the prevalent modern technology,” Ghulam Qadir explains.

Another potter, Manzoor Ahmad Kumar, who works in the house opposite, just outside Gufkral, says he is worried as the craft is losing its essence day by day. He believes that the pots they make will keep people same from diseases.

“There were no diseases among people in the past as they would mostly use pottery utensils and other things, which kept them healthy. With the latest technology pots, people usually remain unwell, which is a matter of concern,” says Kumar. “People and the authorities should help us save this traditional craft.” 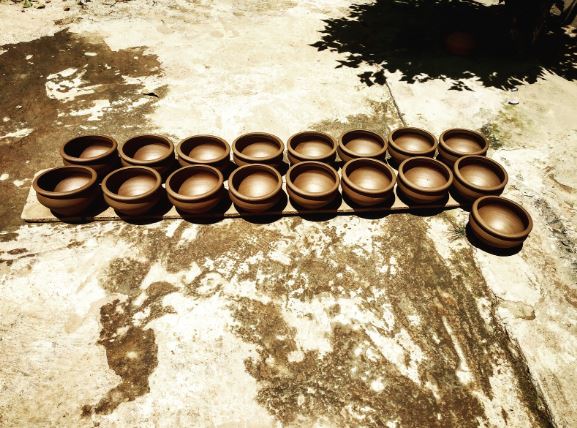 Many village residents have disassociated themselves from this work, with the rest trying their best to continue it even in the absence of support from people or the government.

Nisar Ahmad, a resident of Gufkral, agrees there has been an unabated diminution of the craft. “We earn less and work harder these days, that too on the basis of orders by specific people. Because of this around 60% of the people here have quit.”

“There were days when we would sell the pots in the market and spend the full day outside. Those days are gone, we have to wait for orders now. So people prefer working in different sectors,” says Ahmad.

Locals are also upset about the dilapidated condition of the Gufkral cave, saying their appeals have been getting no response from the concerned government department.

According to the book Ainah-e Tral written by the researcher Dr Nisar Ahmad Trali, “The people who first settled in the cave prepared the floors by applying a thick coat of red ochre, lime and evacuated shallow. Hearths and pit hearths were made for cooking purposes.”

As per official records the site was excavated by the Archaeological Survey of India in 1981, “during which stone artifacts including polished stones, ring stones, pounders, scrapers etc. were found”.

Locals said their ancestors used to live in these Neolithic cave settlements when there were no houses in the area, and would even marry under these sites.

They expressed resentment over the present condition of this historical site, saying the government has neglected the caves as well as their traditional pottery craft.

They hope the authorities will intervene to spare the site of Gufkral, and also ensure the promotion of pottery work in the Kashmir valley. 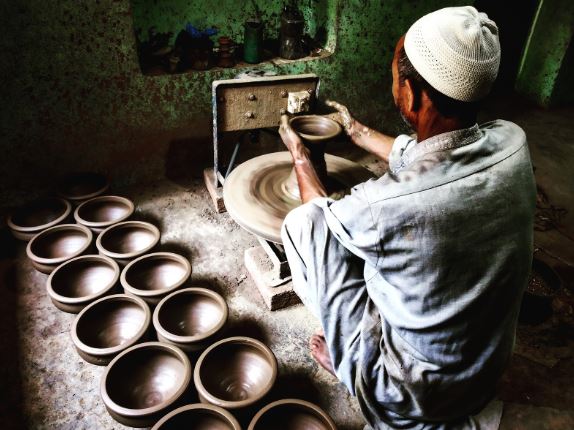