Singer Shubha Mudgal has a Plan to Help Artistes, No One's Listening

For musicians there are few options besides pushing out content online

When people are struck by adversity they turn to the arts for solace. This was true for ancient Greeks and Egyptians, who used music for bonding and healing in times of disease. It is true for the world today, whether we sing from our balconies or attend virtual concerts from our bedrooms.

Several well-known artists in India and across the world tried to ease our anxiety and isolation by performing for free. However, the pandemic does not afford the same liberties to lakhs of budding or lesser-known artists, who struggle to make ends meet as they lose their sole source of income.

Classical and folk performers, who migrated to cities to look for opportunities, have either had to return home or are looking for other sources of income to meet their daily needs.

“Even before the pandemic, in places like Delhi, people didn’t want to pay to watch [classical/folk] artists. Even if we made it free, it was difficult to fill an auditorium. Now the situation is worse,” said Arijeet Mukherjee, Secretary of Artists Association of India, a self-help group that manages artists lacking resources to support themselves. With more and more people streaming content online, he said that “digital” is often used as an excuse to pay artists little or nothing.

“We need to explore the digital space and work on creating content that is designed for the online format,” singer Shubha Mudgal told The Citizen. “Each format has its own strengths and weaknesses. We need to understand these and design online events that people will want to attend. And these need to be events where artists are paid properly, and not just promised publicity and discerning audiences,” she said.

“The content has to be curated, production values improved upon, and all this is going to be a challenge but not an insurmountable one,” she added.

Shubha Mudgal, along with Aneesh Pradhan, started Assistance for Disaster Affected Artistes (ADAA)—a campaign to raise funds to support artists. The ADAA team started mobilising resources as soon as the lockdown was announced in March.

“In early March itself, my own hectic concert schedule came crashing down and it was quite apparent that we would be facing an unprecedented situation. A few phone calls to artiste friends and colleagues from different parts of the country only drove home the fact that this was going to be a terrible blow to all of us, and would cause deep distress for many artists who perhaps are not as privileged as many of us, do not have too many savings,” said Mudgal.

They contacted other friends and artists to join hands with them and the ADAA team was formed. It comprises six people—Aneesh Pradhan, Shubha Mudgal, Rahul Vohra, Mona Irani, Sameera Iyengar and Arundhati Ghosh.

The campaign was announced in early April and has exceeded its target of Rs. 35 lakhs by collecting a little over Rs. 42 lakhs which is supporting 132 artists and their families (works out to a total of about 738 individuals), with Rs. 5000 per month for six months.

But in pursuit of a long-term and sustainable plan, ADAA wrote to several state governments asking them to consider certain relief measures along with detailed plans to implement them, but received no response.

The ADAA team sent emails to 29 governments of states and union territories. “We started sending these out on April 27, 2020 or a little later. The only responses we received were from Delhi, Maharashtra, Karnataka and Kerala. These 4 also forwarded to departments or officials for further consideration, but thereafter, we did not receive any response,” said Mudgal.

The model scheme proposes state governments, over the next 2 years, use 40% of their State Culture Budget and 10% of their Budget for COVID-19 relief to support the Arts and Culture Sector during the pandemic. 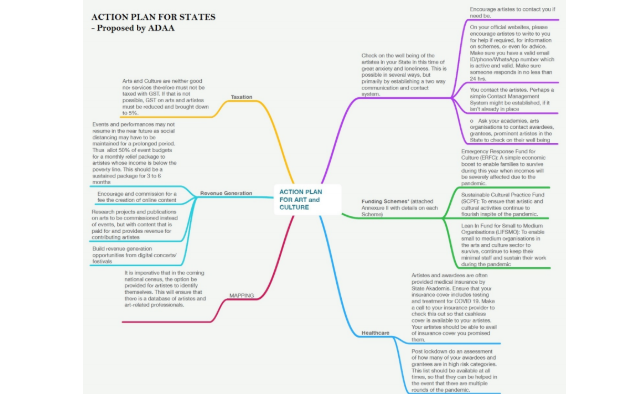 “As individuals there is little we can do if States do not respond to our messages. But we continue to work in our individual capacities as best we can. On my part, Aneesh Pradhan (my husband) and I have launched a project called ‘Gift A Concert’ as a sustainable revenue generating model for artists,” said Mudgal.

Organisations that work to promote the arts are also adversely affected. Groove Gully, started in 2019 to encourage music among school-going children through workshops and exhibitions, has also halted operations.

“Before the pandemic, we were doing extremely well. We visited orphanages every week and had workshops with 5-6 private schools,” said Jay Chauhan, founder of Groove Gully. “We had to put a break on this for 6 months at least. The whole idea behind Groove Gully was to get people off their phones and screens.”

Artists who migrated to cities like Delhi and Mumbai to perform at restaurants and pubs have had to return to their hometowns. “I play in two bands. One is called Eshaan & Priyana. I also play with an instrumental quartet call The Sonic Alchemists, but now, with the pandemic and a lot of my bandmates either having gone back to their home cities or not being comfortable meeting people, I have been dabbling a bit with performing alone,” said Eshaan Sood, a Delhi-based musician.

For musicians there are few options besides pushing out content online through Facebook, Instagram and Zoom concerts. “Facebook and Instagram, as a means of performing, to me personally are quite boring. There is no interaction with the audience,” Sood told The Citizen.

“I am completely blind so even when I perform in a club, I really rely on the energy in the room to guide me as to how the audience is feeling, which kind of doesn’t happen on Facebook and Instagram. Zoom is a little better since you can at least see and hear the people who are watching,” he said.

What can be a long-term solution to this problem? “As far as the government is concerned, they need to first acknowledge that the art and culture sector too needs help,” stated Mudgal.

“In addition to the model schemes we have suggested, they could consult other specialists once they stop being in denial, and the least they could do is to reallocate funds ear-marked for festivals and events towards relief measures for the sector,” she said.

Citizens could do more too. “I believe it is now left to the music loving public at large to provide support to the arts by making small contributions, supporting relief projects and building a community that cares for the arts. However, this should not only be in the nature of charity,” Mudgal told The Citizen.

“A sustainable way of supporting the arts is by buying music, tickets to online events and subscription-based projects must be encouraged. Equally, there is a large section of research scholars and other people working in the field of the arts, such as instrument makers, audio engineers, lighting designers and others who will need support through revenue generating projects,” she said.