One Big Family: Bollywood Nepo Culture and the Grand Samaj

What is nepotism all about?

The brouhaha over nepotism in Bollywood is not dying down anytime soon. In fact this time the scene seems poised for radical events. With Subramaniam Swamy on board and millions of Sushant Rajput fans awaiting justice, the spirit of finally doing the right thing is thick in the air.

To begin to understand this, let us have a look at the random social demography of Bollywood. First, the Hindu samaj. What does a cursory glance at the varna estimates below tell you? 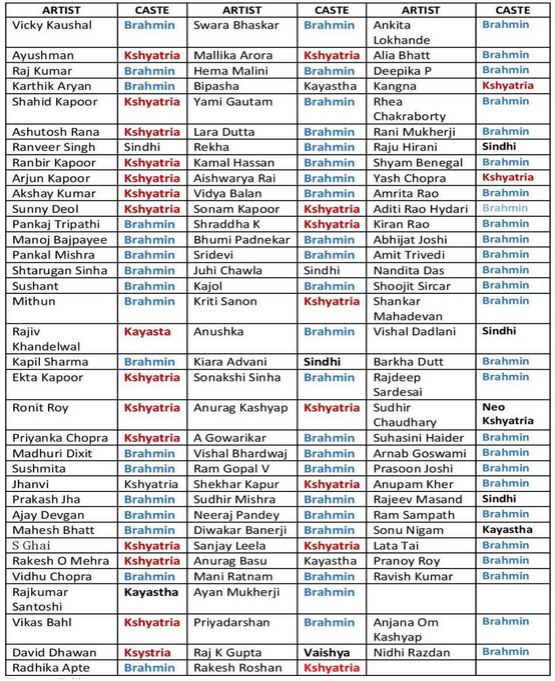 There is indeed an elephant in the room. It is called the Brahmin-Kshatriya hegemony. Is this the reason for the family nepotism bogey out there, are those families just the iceberg tip of the true extent of nepotism in Bollywood?

It is not surprising that the dynamite moment arrives, with the death of an actor who was not only a Kshatriya but a man, named Sushant Singh Rajput. Not surprising that the anti-nepotism charge is being led by an actress who is herself a proud Kshatriya, and the granddaughter of an IAS officer. Maybe it is as part of this scheme that Rajput is being packaged as a Patna Boy and Bihar pride. After all he was a Rajput man, and a talented name and face beloved by one resurgent India.

Since the Brahmin and Kshatriya axis is here to stay in both models, what are the chances that this axis is calling the shots in this “war against nepotism”?

An industry loaded with Brahmins, Kshatriyas and their kids, resolves to find the culprits of nepotism at home. Guess who takes the nastiest hit? Of all people, a Sindhi. For… sometimes being the agency for Pandey sahab’s daughter Ananya, and at other times Srivastav sahab’s nawasa Agastya and so on and on.

What does the Brah-Kshy majority lose in this incarceration? They lose nothing, not even words, while the agency is shaken to the core.

Who else takes a hit? A Muslim A-list actor, a veteran Brahmin director who converted to Islam in 1986, another young Brahmin actress who together with her actor-father raised a front in support of Dr Kafeel Khan, and lastly, Rajeev Masand, another Sindhi.

This is not to say that the alleged provocateurs did nothing wrong to Sushant. Rather it is to argue that, if there is a Brahmin-Kshatriya hegemony in action, then the said culprits are only doing the work for someone else.

I might be digressing, but this suddenly takes me back to the story of another Sindhi who loved playing with Brahmin Kshatriya boys. An all-powerful Hinduwadi who is practically the father of the BJP wave in India…

Yes, you got it. Lal Krishna Advani, whose controversial work with the Rath Yatra and the Babri demolition brought the BJP to power, and who was later repeatedly thwarted off his PM dream since he had been pegged the controversial worker. Meanwhile, who gets to be PM on the basis of this controversial work? Mr Vajpayee of course, a Brahmin, and his Kshatriya kitchen cabinet.

The posture and fate of Karan Johar as a Sindhi controversial worker, is evidence of a Brahmin- Kshatriya axis in action behind the nepotism in Bollywood, and indirectly behind the death of Sushant.

Look, the Brahmins of India don’t like Sindhis very much. Sindhis are proud Hindus, but in the Sindhi samaj, there is no caste as such. And in whatever semblance of caste they have, the Kshatriya and Vaishya are the leaders, with the Brahmins at number three and only Shudras below them. For this and other reasons (such as the Arabic script of the Sindhi language) Sindhis are often the fall guys of the Hindu samaj.

Therefore, Karan’s fate is to get disappointed, in the name of the very work he was given space to do, by the same people now posing to sack him.

If there is an active Brah-Kshy hegemony at work, how did it end up harassing a fellow Rajput outsider? Look at this.

The long list of names that you witnessed of the BK hegemony are being maintained only through family based connections. If there is no family connection, what will be the instrument of applying caste?

Against liberals for two reasons.

One, it allows her Hindutva support, for tearing into those who did not treat her well because she was an outsider. Two, as mentioned by Hartosh Singh Bal, filmmakers often turn right wing, when their products fail and they think that liberal critics and audiences are unable to appreciate them.

In the end both family nepotism and the BK hegemony will stay. The current order of Bollywood bigwigs will get some damage for Kangana’s comfort, and a big Sindhi of the Indian narrative industry, together with some liberandu Brahmins, will be weakened for the record of Hindutva Two Point Oh.

It is not surprising that recently AR Rahman revealed he has not been getting work and that unknown people were forcing Mukesh Chabbra not to sign him for Dil Bechara (2020). That Subramanium Swamy called the CBI on the Khans, is not surprising either.

Now let us look at the 20% Muslim segment of Bollywood. One would wonder what Muslims like myself are doing around such a powerful hegemony. Before asking that, observe two facts.

One, in the past seven decades of Indian film entertainment, there is a fact that has beaten the test of all times. If there is a song, a dialogue, an act, a film etc that has ever touched the heart of the Hindu entertainment consumer, it has come from a Muslim actor, writer, singer, lyricist etc.

In fact, no one touches the heart of India as the Muslim artists do. Muslims make big bucks and breakthroughs for the whole entertainment business and this is how they get to share space with Brahmins and Kshatriyas. After all, neither Brahmins nor Kshyatrias are traditional entertainers.

Fact two: Hegemony also offers no free lunch. Muslims pay a price for their participation and their representation in Indian cinema. Once this price was Terrorist themed, now in the age of Love Jihad, the price is sexual slavery. A price that screenwriters are asked to extract from any film where a Muslim plays a major role, or a major actor plays a Muslim role.

It’s a fixed thing. Check it out.

Also note that Muslim artists have made no worthy effort to undo nepotism in the Mumbai film. Far from it, they have played along with their Brahmin-Kshatriya comrades and contributed heavily to nepo culture.

Meanwhile, what is being touted as gate-keeping is nothing but the personalisation of work and family that occurs in the Brahmin system.

As theorist Kancha Ilaiah Shepherd has said, in the Brahmin world view, the metaphysics as well as the home, children, wife, everything is considered private. There is a clear demarcation only between the self and the world, the inside and the outside.

Is the nepotism in the family of Bollywood nothing but this demarcation?