Mee Raqsam - A Daughter and Son's Tribute to Their Father, Kaifi Azmi

Presented by Shabana and Baba Azmi

I wish more of us had the courage to tell bullies in our respective communities that aap humko masjid se dooor kar sakte haiin lekin Allah se dooor nahin kar saktey (you can distance me from the mosque but not from Allah).

This is a line from the recently released Mee Raqsam, a lyrical first film directed by Baba Azmi, ace cinematographer. Mee Raqsam means I dance.

The film is presented by actress Shabana Azmi. It is a tribute by Shabana and her brother Baba to Kaifi Azmi, their Urdu poet father.

There are similar lines in the film that haunt. This particular line is difficult to forget because of the determined but dignified way it is delivered by fine actor Danish Husain who plays Salim, a tailor in Mijwan.

This is a small village in district Azamgarh.

It is the ancestral village where Kaifi Azmi was born, and he returned to Mijwan to build a home there in the 1980s. Azmi had left Mijwain in the 1940s to study in the city, to see the world and to make a living in Mumbai. But the simple almost pristine life of his childhood in Mijwan was never forgotten by Kaifi. He had once wondered if a film could be made in his village.

That dream of the late poet is now realised by his children Baba and Shabana, 18 years after his death in 2002.

Mee Raqsam is shot in Mijwain and the protagonist Maryam is played by Adity, one of the many children of the Azmi household in Mijwain.

The thatched roofed barn where Kaifi was born is also visible in the film that is made with such honesty that its simplicity hurts.And how it is so possible to tell great stories on the silver screen without capital swallowing gimmicks like foreign destinations, unrealistic sets and the unnecessary pampering of ‘stars’ instead of actors.

What Baba Azmi has done in Mee Raqsam is to unfold a simple story powered by great acting and a taut narration against the pastoral landscape of lush green rice fields. The style is unpretentious. The bamboo groves in the village glow on screen. The camera infuses the bridge, and the banks of the local river with much romance. The rays of the sun twinkle through over grown reeds in the rustic background and upon the rippling waters of the river. Sunrise on different days is repeated in scene after scene as if as an obvious metaphor for a real possibility of a new dawn for humanity as dreamt by poets like Kaifi Azmi. 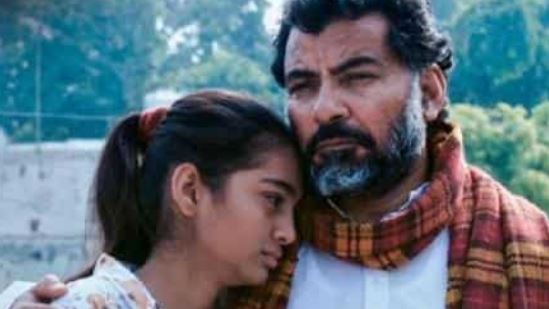 However, it is also hinted that humanity cannot simply wait on its haunches for the new dawn. Therefore characters are shown to stand up and to speak out their idea of a society they want to live in even when bullies threaten to destroy them.

When the courageous Salim speaks his mind in Mee Raqsam he is punished by self styled custodians of society. Salim’s personal piety and devotion to his creator is unacceptable to a society that seems to have lost its senses.

It is not enough that Salim is in awe and in obedience of Allah. Almost the entire village gangs up against Salim and makes him suffer for refusing to succumb to the dictatorial attitude of a cruel community elder. Like cowards the community boycotts Salim and his modest tailoring business. By siding with the diktat of the pompous bully, the village does not think twice about making life hell for Salim and his teenaged daughter.

Salim is barred from performing the routine Friday prayers with the others at the village mosque. His love for his creator intact, Salim returns to his modest two room home to pray by himself. His meditation, however is disturbed by the shattering sound of glass. A stone is flung at his window probably by paid bhakts who zip into the heart of communities, make trouble between ordinary citizens and disappear into the crowd after spreading hate and violence.

These are the worst kind of human beings in our midst whose contribution to life is little except to cause death destruction to others.

More injustices against Salim pile up. The word kafir or infidel is scribbled on the wall of his home. That is when the teenaged daughter shows that she has had enough. Now it is she who will decide what to do next. The cruelty of neighbours they have grown up with shocks her. How quickly everyone has turned against her father and her, makes the young girl even more determined to follow her heart. She decides not to give up her love for Bharatnatyam.

She listens to taunts like, a Mohammadan girl performing the sacred rituals of Bharatnatyam…how dare she? And riaz, her daily practice becomes even more obsessive than the most ardent of all devotees.

The fierce determination of this teenager to demand that society respect her kind and loving father and to make a room for herself in life by doing what she thinks is right, culminates in a passionate public performance by her.

The Bharatnatyam dancer shares a spiritual experience with the audience by performing to the sufi chants of Ali, reiterating that the glorious GangaJamuni way of life still resonates with the majority of people in this part of the country.

That neither Hinduism nor Islam is so fragile that a Muslim teenaged girl practicing an Indian classical dance, or a Hindu girl in love with Sufi music can destroy their respective faith.

That is why it makes the heart happy to hear Salim the humble tailor say in Mee Raqsam that his faith in Allah is steadfast enough to fearlessly help his daughter realise her dream, whatever it might be.