In conversation with street artist Tyler

Arnab Goswami, Sudhir Chaudhary, Kangana Ranaut, Amish Devgan… Inspired by the Hollywood Walk of Fame (albeit with a twist), these names have been accorded a prominent presence on the streets of Mumbai.

Unlike the five-pointed terrazzo and brass stars embedded along Hollywood Boulevard as monuments to achievement in the entertainment industry, TV anchors Goswami, Chaudhary, Devgan and actor Ranaut are part of a crowdsourced effort to name and shame public figures who have been “instrumental in spreading propaganda that causes widespread destruction, violence and stupidity.”

This is Mumbai’s “Walk of Shame” - the brainchild of street artist Tyler, who asked users on social media to submit names of prominent figures who they think “should be highlighted and celebrated for their current spineless stand on issues.”

The names were then stencilled onto the streets of Mumbai, complete with the words ‘Walk of Shame’ and flanked by cockroaches and a big blob of poop. “The need to call out the public figures who broke the trust of the people and swayed on to becoming a mouthpiece of the ruling party was the main inspiration behind the Walk of Shame,” Tyler tells The Citizen. 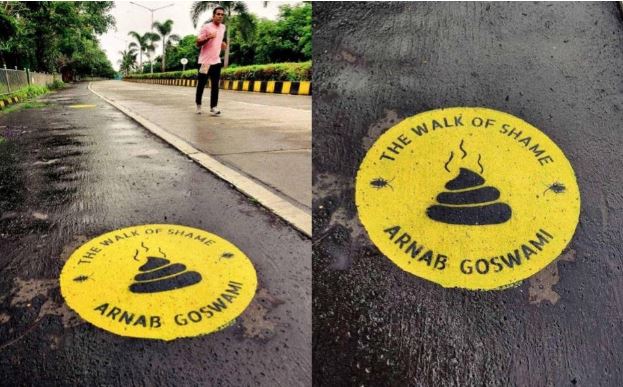 It’s a crowdsourced project, with names appearing in the comments on Tyler’s social media posts. “The process is simple and engaging. People comment under a post with the names of the people they think should feature on the Walk of Shame. Most repeated names are then eligible for vote,” Tyler explains.

A post on the artist’s Instagram page states: “This is a public-led initiative. I would only execute the work as a street artist from having gained the experience. This is purely in the interest of the people.” 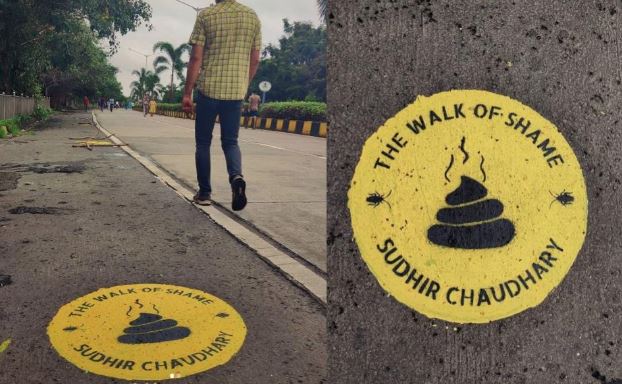 Nevertheless, Tyler admits that there is an editorial process after the names are submitted. “ I do my research before selecting the candidates for voting. The comments sections are spammed by right-wingers with names, abuses and threats,” Tyler says.

“To give the right-wingers a fair chance I did put Ravish Kumar’s name up for voting against Amish Devgan. As soon as voting started, right-wingers raided the polls. Almost 8 out of 10 accounts were proxy accounts and do not follow the page. They shared this on several telegram channels and whatsapp groups just to increase the number of votes. Their only intention was to come and vote and make sure Ravish Kumar loses. This is a classic example of how any Elections can be rigged,” Tyler tells The Citizen. Devgan’s name made it to the Walk of Shame. 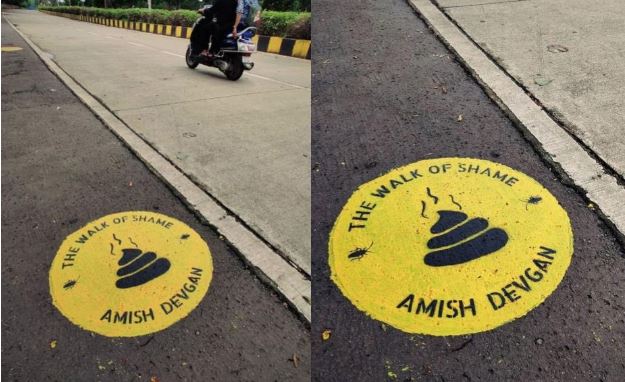 Tyler says that despite the abuse, “the response is mostly positive with an occasional threat coming every one hour.”

The artist is no stranger to political art. A quick scroll through Tyler’s official instagram feed reveals everything from Goswami on a chain being led by the Prime Minister to a tribute to dalit scholar Rohith Vemula. “Political art is meant to question everything around us. What better way, than to paint it on the streets,” Tyler tells The Citizen, adding that “I love to paint political imageries. I ventured into street art by accident. I have been painting the streets for almost a decade.”

Is the artist afraid of backlash? “NO” Tyler says emphatically.