The 11th Cinema of Resistance weekly film screening and live discussion was held with the screening of the 72-minute documentary called Naach Bhikari Naach directed jointly by Shilpa Gulati and Jainendra Dost on August 29, 2020.

Naach is a form of traditional folk theatre from Bihar, India. In this tradition, male artists crossdress as women on stage and are referred to as ‘laundas’. The most legendary name in this tradition is Bhikhari Thakur’s (1889-1971)— who was an actor, playwright, and a social reformer popularly known as the ‘Shakespeare of Bhojpuri.’

The film follows the last four Naach performers to have worked with him and creates a visual archive of a performance tradition. As they share their plays, songs and a lifetime of memories, they soak us with the world of folk theatre where we see a glimpse of budhau – the old man, himself.

“Even in its documentation, the folk form has been considered achhuta. When I started my research in 2012, I barely found any written material through which I could gain a historical understanding or contextualise the form,” says one of its makers, research scholar Jainendra Kumar Dost.

The word “naach” for the “laundas” is more than a word that means “dance.” It is a philosophy the performers live by — a way of life for those who do not know any other and who feel happy to be performing artistes trying to hold on to the last vestiges of a folk performing art called launda naach. Launda, which means a fellow, is used as a derogatory slang to address or refer to men and boys belonging to a low caste.

The directors made this documentary in Bhojpuri, the dialect spoken by the performing artistes. The film has been produced by the Public Service Broadcasting Trust. The artistes come from different parts of Chhapra in Bihar. In their heyday, they travelled to perform to ticketed audiences across Dehrion Sone, Sasaan, Asansol, Bardhamaan, Andal, Palamau, Daltongung and so on.

The seeds of the documentary were sown at the School of Arts and Aesthetics at Jawaharlal Nehru University in 2012, where the filmmakers were pursuing Master of Philosophy degrees in different subjects. “I was researching documentary practice and Jainendra was looking at folk theatre in Bihar,” Gulati said. “He had met the artists during his field research. Our interaction over the last five years and a deep-rooted love for theatre lead us to collaborate on this film.” 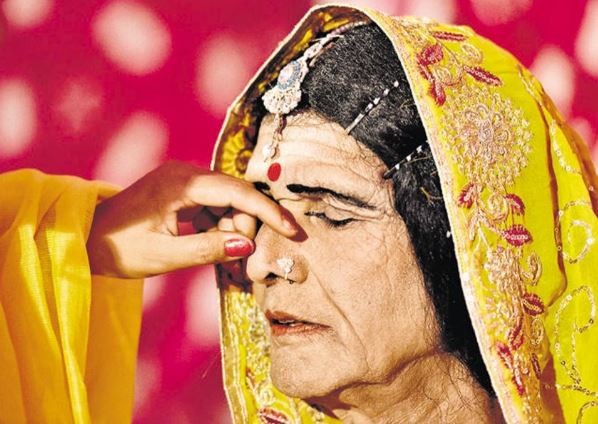 The film has multiple layers. The first explores the men who dress us as women before they go on the stage for a performance that covers singing, dancing and theatrics with live accompaniments of tabla, harmonium and sarangi. The second explores the psychological and social dynamics of these men who hide their female personas and their performances from their wives, their children and their grandchildren.

The third shows that since this is a fading art, all performers, pioneers of the art are very old, their ages ranging between 50 and 92. Ram Chander Majhi, a star in his own right, is 92.The fourth is about the ostracism they suffer from upper castes in general and Brahmins in particular who opine that their performances are vulgar and obscene and yet, turn up to watch clandestinely.

Last is the grinding poverty these old men must confront and fall back on farming when there are no call shows. Ram Chandar Chhote recalls how he would massage Bhikari Thakur’s body with 100 gms of oil as the guru taught him to take pride in his low birth and not allow himself to be patronised by the rich and the upper classes.

These come across through interactions between and among the directors (off-screen) and the performing artists intercut with on-stage performances of small skits with a joker, an anchor and an actor from time to time. Some of the younger performers look quite convincing in female attire but their voices give their sex away.

The life that throbs beneath the surface pushing them to desperate poverty is the pride they feel as artists and that there are people who still come to watch them perform.

The main artistes – Ramchandra Majhi Badi, Lakhichand Majhi, Shivlal Bari and Ramchandra Majhi Chhote represent the Bhikari Thakur Repertory Training and Research Centre in Chhapra, Bihar. They are all praise for their late mentor and guru Bikhari Thakur who they say, did not differentiate between and among people and held aloft the tradition he led to great performances.

Jainendra Dost is the Director of Bhikhari Thakur Repertory Training and Research Centre which is working towards the revival of folk theatre in Bihar. Shilpi Gulati’s body of work largely engages with themes of gender, performance and oral traditions in India.

In the past three decades, the 1887-born Bhikhari Thakur’s work has grabbed national spotlight – with his plays on migration, addiction, dowry and the condition of women, being translated. But in the process, scholars say, the Naach has been sanitised, crunched and tailored to suit mainstream sensibilities. Thus, if preserved and sustained with promotion and proper marketing and practices, this also functions as a social agency to spread messages against social ills.

Thakur died in 1971, but going by the moist-eyed interviews in the documentary Naach Bhikari Naach, he appears to have moved on only a few weeks ago. Thakur authored 12 plays (including the landmark migration-themed Bidesiya) and numerous songs in Bhojpuri since the 1920s and ran a drama troupe. Four of the troupe’s surviving members appear in the film to recite his songs from memory, share their views on his politics, and rewind to their experiences of working with Thakur over the decades.

Jainendra, who has written the biographical play Bhikarinama, drew from his origins while conducting his research – he is from Bihar’s Chhapra district, and has seen numerous Naach performances during his formative years “The documentary is one way of understanding the culture of Naach,” Dost said. “Bhikari Thakur is still popular, and in Chhapra district alone, according to my research, there are 30-35 groups that perform Launch Naach despite new forms of media.”

The directors inform us that pioneers of this fading folk art and other performers are rigid about keeping the two worlds of private life and public performance separate. “Bari goes home after every performance, changes into a devoted house husband because his wife is mentally challenged. This includes feeding and taking care of her which shows that they are not only conforming to gender roles but also have a liberal approach towards feminism,” says Gulati summing up. 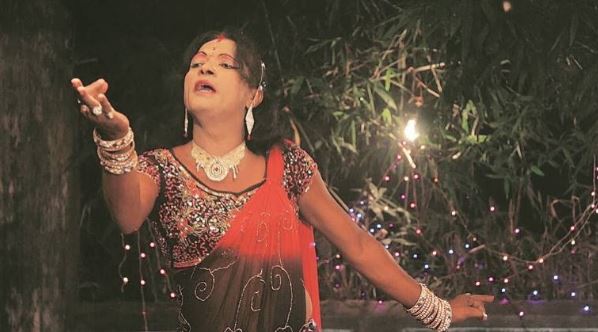