As a member of the Press, what a delight to be able to view TIFF films at home in the country and city that is your base, choosing titles of your choice from its compact 50 films.With COVID constraints severely curtailing a virtual TIFF, Festival Head Cameron Bailey and Executive Director and Co-Head Joana Vicente, have made an impossible dream, possible. Together with their team, using their expertise and ethnology, TIFF films are being made available to an international Press and world audience, digitally on request, in a smooth, rewarding process.

The first two films on my agenda were the gently touching docu-drama, ‘Lift Like A Girl’ (Ash Ya Captain) from Egypt, directed by Mayye Zayed, and in sharp contrast, the docu-drama ‘Enemies of the State’ directed by Sonia Kennebeck, a disturbing and not easily accessible presentation of an individual driven by his societal agenda.

Mayye Zayed’s ‘Lift Like a Girl’, moving with ease through its 92 minutes, is set in a seedy shipyard area in Alexandria. Shot over four years, starting when aspiring athlete Zebiba was 14-years-old, this Arabic film presents the heartfelt bonding between her and her trainer, the former Olympic athlete, 65-year-old coach, Captain Ramadan, a job he has held for two decades without government support. Zebiba aims to be the next Nahila Ramadan, her trainers’ daughter and former world champion and Egypt’s most famous athlete.

Zebiba, despite the constraints of her poverty, sets her eyes on her goal, training under the eyes of her elderly crusty, maverick tutor.

The film resonates well with India where women taking to sports such as weight lifting could well raise eyebrows from family, friends and social circles, specially in countries with a patriarchal code. The profession seems to lack any kind of femininity – a subversion of sorts. But today we live in a world that applauds gender equality in all fields. This film is a compelling and sincere acknowledgement, relating to a young girl who excels in an area reserved for males, and for taking on seemingly un surmountable challenges regardless of their social base, and succeeding, to the pride of one and all. A morality tale embalmed in modern times.

‘Lift Like a Girl’ also dwells on the bonding between teacher and pupil in the arena of sports. Mercifully liberated from any constraints or moralizing on the subject. A tender rendering of gender equation, the film is prescient with a humane view of those who choose an unusual path and a driving motivation in life. All the more so, when the person is a young girl on the threshold of womanhood, a delicate time for decision making, specially so in countries with a set code for women.

The central character, in her young teens, weight lifter Zebiba, is all set to be a worthy contender for an upcoming international award in her chosen area of sports. Like many from countries in the Eastern world, she is not tall or statuesque. She is impressive nonetheless - swarthy, well toned, tough as steel, her presence telling one and all that she means business and is set to prove her mettle.

The film follows Zebiba’s every move as she goes through her relentless routine – a seemingly never-ending set of exercises. Time after time, the weight she raises increases mercilessly as she practices, gritting herself, steeling her feet and muscles, taking a deep breath as she bends to lift her load, letting it settle on her shoulders (a feat in itself), heaving it sky high for seconds, then letting it crash on the ground below. What she is heaving above her head is a barbell loaded with weight plates. The two lifts she must master are the snatch, and the clean and jerk. Her physical relief is apparent when the exercise is over. She is clearly swarthy, muscular and focused. Finally, in the open Selection auditions, she almost breaks down, unable to take the strain and the load of her task, but finally gathers the grit to succeed and win. The applause from her public is generous and loud – and from viewers of the film, clearly palpable. This film comes to TIFF fresh from the laurels it gained in Venice. 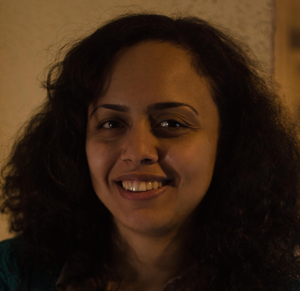 Mayye Zayed, director, cinematographer, editor, producer from Alexandria, Egypt, is a co-founder of Rufy’s Films, an independent film production company and a collective of 5 filmmakers in Alexandria, Egypt. A Fulbright scholar in cinema and media studies in Wellesley College and Innovations in Documentary in MIT in 2011/2012 in the US, she is the recipient of the Getty Images ARRAy grant in 2018 and Film Independent’s Global Media Makers Fellowships in 2017 and 2019; an alumna of Berlinale Talents, Mediterranean Film Institute, Documentary Campus Masterschool, DOX BOX and the American Film Showcase documentary program in USC School of Cinematic Arts. In 2013 she co-directed, co- produced and co-shot the collaborative feature ‘The Mice Room’ (Dubai FF 2013, Sao Paulo FF 2014) with 5 other filmmakers. As editor, she edited the feature documentary ‘I Have a Picture’ (Best Arab Feature Documentary in El-Gouna FF 2017, Best Documentary in Tripoli FF 2018, Best Documentary in Sharjah Film Platform 2019). In 2016, she directed, produced and edited the award winning short ‘A Stroll Down Sunflower Lane’ (Berlinale 2016, AFI Fest 2016, Best Experimental Film in Sharjah Film Platform 2019). ‘Lift Like a Girl’ is her first feature documentary.

Unfurling as a suspense thriller, ‘Enemies of the State’, eats into its journalistic style by trying to be as true as it can to the mystifying events of this somewhat disturbing episode in real life history, but leaves the viewer mystified on what it is pointing at. The film follows Anonymous hacktivist Matt DeHart (Anonymous is a decentralized international activist/hacktivist collective/movement widely known for its various cyber attacks against several governments, government institutions and government agencies, corporations, and the Church of Scientology), DeHart is convicted on child pornography charges that he and his family denies. At the age of 25, the former Air National Guard serviceman claims he has uncovered government secrets which led to FBI trying to frame on concocted crimes.

Enemies of the State

The implacable countenance of the main protagonist adds to the viewer’s quandary of uncertainty on what it true and what is lies. In the end, we do not know. That could well be because no-one knows, not the FBI or the secret services of various nations. Is that the point the film is making, a question posed with some timidity? Despite its uncertainties, the film does provide a suspense trail that at times is gripping. Take care, the film seems to be saying, you may not be knowing what is going on with those around you. A grisly feeling but it could be for real. However, the suspense does not quite live up to its promise of chilling revelations, and more so, its end. A nonplussed audience is a somewhat disappointed one.

Sonia Kennebeck was born in Malacca, Malaysia and is now based in New York City. She received her Master’s in international studies from American University in Washington, DC. She has directed eight television documentaries and has done over 50 investigative reports for German public television before becoming a filmmaker. Her feature documentary debut, ‘National Bird’ (16), premiered at Berlin and later received the Ridenhour Documentary Film Prize and an Emmy nomination. ‘Enemies of the State’ (20) is her latest documentary.