Glimpse of an Addict’s Phone Screen

Nomophobia is the title of a three minute film by Ankhiyan Ranjan, a student at the Jamia Millia Islamia in New Delhi, slated to be screened at the VerticalMovie film festival in Rome on October 10. You can watch the short film at the end of this article, in which Ranjan describes what is called nomophobia… 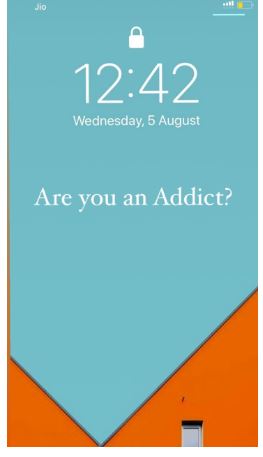 11:41 pm rushes to Mom’s room. “Mom, mom, wake up, can I please borrow your phone to call mine? I can't find it anywhere. Sorry to wake you up. Thank you.” Calling…

We are somewhere bound to place ourselves within this narrative, as we have all witnessed this panic, and adrenaline rush on the idea of losing our phone. The device holds the capacity from making us extremely indolent to rushing in panic within a matter of a few seconds.

Multiple studies by psychologists suggest the development of a fear amongst smartphone users, of not being with their smartphones, or of losing their phones. The fear has been termed NO MObile phobia, or NOMOPHOBIA.

Scholarship across the globe has drawn a direct relation between mobile phone dependency and comorbid mental disorders, with multiple studies suggesting that as many as 20% of their subjects had arguments for excessive smartphone usage, and interrupting work to check their phones even if there is no notification.

Dr Krishna Shankar Kusuma, a scholar in the same field talks about the “intimate space” which mobile phones offer, making them more humanised by exchanging feelings and negotiating space.

The pandemic has furthered the intimacy of the mobile phone over anyone else in the society. “The fact that it is a replacement for a lot of human attributes seems to be making our lives convenient at this moment, but the certainty of health hazards in near future is unavoidable,” Kusuma believes.

Gaming addiction on mobile phones is yet another aspect, where we come across bizarre stories of people, especially the youth, being involved to a degree that they become unaware of their physical and tangible surroundings.

While we learn about this phobia, most of us also realise that this is something that we have, or will potentially develop with our growing dependency on our phones.

It's like the house of candies built by the witch for Hansel and Gretel, only to lure them in and abduct them. We do not know yet that we are feeding on these treats being offered to us in the form of a small screen, until we realise that it’s a trap we are falling into.

NOMOPHOBIA, an interactive project, is a short video which forces you to confront your phobia by depicting what your mobile screen looks like, especially in the pandemic.

The project has received recognition across various platforms, and has been nominated for an international film festival being held in Italy, called VerticalMovie, on October 10 in Rome.

NOMOPHOBIA is not one person’s story, it is a story of every individual stuck in this matrix and unaware of the trouble they are in. The film attempts to capture the state of our minds in dealing with productivity, isolation, and competition, which have also been catalysed by the pandemic.

You can watch the 3 minute film below: