Then Mumbai was Bambai

Imtiyaz, the Khush Mizaz, was in worst of his mood when I entered his Haveli located at one of the narrow, overcrowded Gullies crisscrossing Sofia Zuber Road in Nagpada of Mumbai.

Nagpada today appears sleepy but years ago when 13-years old Imtiyaz moved here with a Balti of glue, film poster bundles and ladder in hand, it was a vibrant Bollywood junction.

But Mumbai then was Bambai! And Bambai, by all means, was different from Mumbai.

Bambai meant the golden days of silver screen. Mumbai means a Bollywood churning out movies one after another, like a factory.

This transformation also saw film poster making by hand as a piece of art to their digitization in purely commercial style. No wonder, the Bambai-era posters still commands collector’s demand.

Now back to Nagpada, a Muslim mohalla growing out of exodus of those from Kanpur, Lucknow, Allahabad and Benaras fighting at Ghaddar of 1857 against the British East India Company!

After printing, the works of Imtiyaz began to paste them.

Mizaz of Imtiyaz turned Khush on finding Nadira stepping out of her house and watching him smilingly pasting posters of films in which she acted.

Mumbai’s Nagpada has no Bollywood touch now. Kahaan gaye woh din….. Where has gone those days?

Those were the good, old, honeyed days of Bambai when intellectualism brimmed in the celluloid world.

Mysteries of Haveli, Zamindari & An Arrow-Mark

Mian Imtiyaz was Badmizaz, ill-tempered, when I met him at his 105-years old shanty: his Haveli - the Royal Palace.

Why not? Is not every poor Hindustani’s cottage a palace for him?

Would not you agree? I don’t care if you don’t.

Itiyaz’s claim that Ali family once had a Haveli and Zamindari in Alibag was mysterious.

The peculiar arrow-like birthmark on his right hand’s wrist was also enigmatic as he believed it was sign of reincarnation of the first Ali founding that Zamindary centuries ago.

Incidentally, do you believe in reincarnation?

However, Sultan, a Dhobi, strongly believed Imtiyaz was a reincarnation of the first Ali who fought for the Mughals in Deccan and Konkan.

His ancestors supposedly had a Zamindary somewhere in Alibag. But he knew not where it was. His grandfather Waris Mian and Abba Huzur Mansoor Ali also never knew name of that village.

Equally mysterious was Imtiyaz’s sudden vanishing for some time and stoic silence where he had been and why?

Only Sultan, the Dhobi, knew where he had been and why?

The Ali’s: A Compact-Complete History of Film Posters

This is an old affair telling tales of three generations engaged in film poster pasting jobs in Bambai and Mumbai. 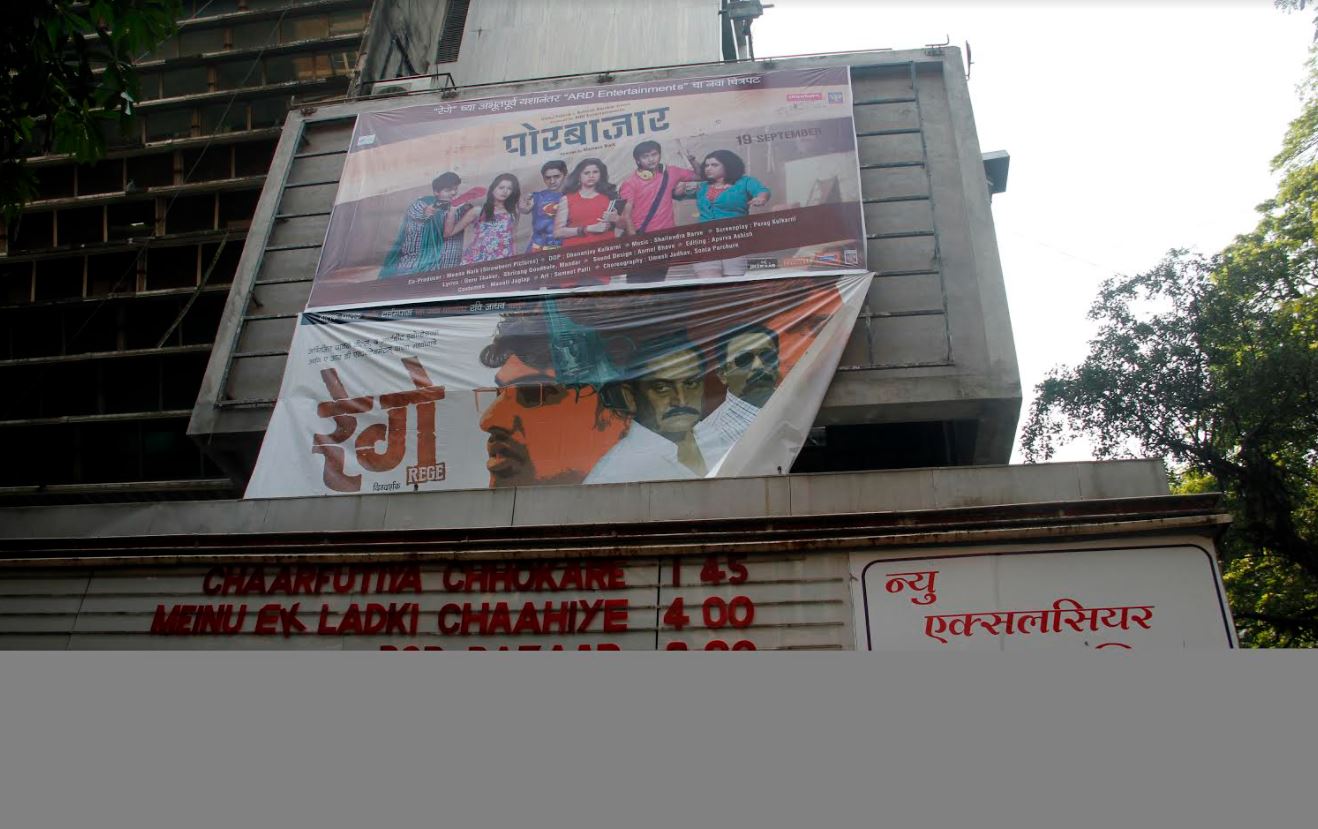 Some painted wall hangings, paintings for drawing rooms and customized art pieces to adorn walls of Bombai hotels. Such studios switched over to film poster making in 1930’s.

Waris Mian, employed in one of them when Sofia Zuber Marg was not even born, began his career as poster pasting boy with Achhut Kanya in 1936. It was a super-hit film.

The colour as thematic representation of movies was absent when Achhut Kanya was released. It will still take few more years for the colour-concept of film posters to be born.

Wondering, are you? What do colours mean in posters, in any way? Well, colours in handmade posters conveyed filmy themes with different shades depicting character proto-types: heroes, heroines, villains and vamps.

Before Waris died, his son Mansoor was already working as pasting boy. And before Mansoor died, Imtiyaz was already in the job.

Imtiyaz learnt the colour-code secrets from his father. A young Imtiyaz was amazed. And so would we be!

The red signified an angry hero, revolutionary or a Daaku and pink was for love: Isq, Pyar, Muhabbat, romance. The blue and black hinted the film is about a villain’s villainy.

On a rainy July evening in 2006, I reached Imtiyaz’s Haveli to gather information on the Bollywood’s first dancing queen Cuckoo, known as Plastic Girl for she bent her body unimaginably, while dancing.

Imtiyaz’s grandfather and father, I knew, pasted the posters of Cuckoo’s movies. I wanted to file a news story on her for the daily newspaper I served in Mumbai.

Nobody suited more for it than Imtiyaz Ali: the retired poster pasting boy, as he describes himself and currently a Chaiwalla selling Garam tea near the Nagpada Neighbourhood House at Sofia Zuber Road where I lived earlier for some time. 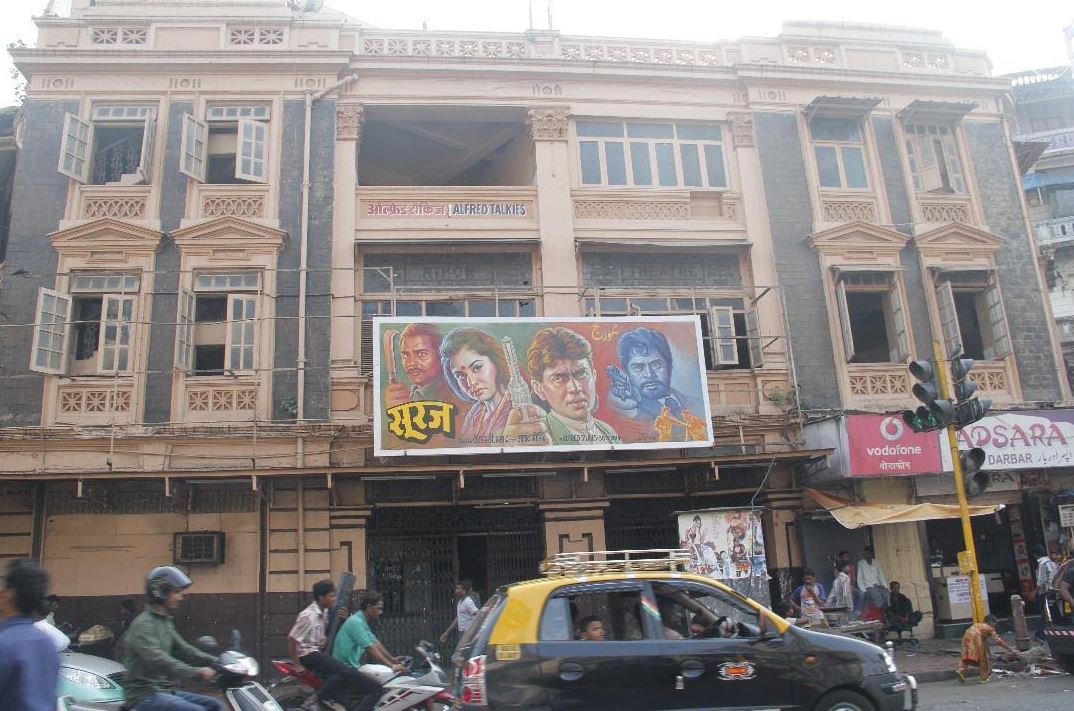 As Chaiwalla, he earns enough to support a single soul: himself.

He is single! His Begum died years ago, had no children and all relatives lost in the thick crowd of teeming millions.

Was not he, truly single?

However, in Akram Ali’s days at Alibag, their Haveli brimmed with people.

As a soldier in Emperor Jehangir’s army, he fought daringly in the Deccan and in Konkan where the Mughals then were expanding. Battles then rattled regularly.

In one such a battle, Akram saved a Mughal Sipahsalar’s (captain) life. As an enemy raised sword to chop off his head, Akram shot an arrow killing him on the spot. That Sipahsalar, a minor Nawab, was saved.

He offered Zamindary of a small village in Alibagh to Akram where he built a Haveli.

He had an arrow-like birthmark at his right hand’s wrist.

Do you believe in reincarnation?

But Dhobi Sultan very strongly believed in it.

Akram died in a battle but the Ali family lived for generations in that Haveli and village till 1769.

Attacks on Alibag region became so regular that the Ali family was forced to leave their village and flee to save their lives.

That was the end of Imtiyaz’s Zamindari family. And then, they were totally forgotten!

In 1902, Waris landed in Nagpada and purchased a Haveli where I entered to know find bundles of old hand-painted poster lying everywhere. They were Imtiyaz’s everything. He fondly termed them as his Heere, Zawaharat: jewels, diamonds.

Some of them belonged to his grandfather, some to his Abba Huzur and some to him.

The Haveli was a poster junction of three generations!

Once Imtiyaz told me a very interesting anecdote on the day of release of new movies on Fridays, primarily the Friday Matinee Shows.

Many of his young Yaar-Dost would steal money from home or sold utensils from kitchens to buy tickets for such First-Friday shows at Edward Theatre, Imperial Cinema Hall, Regal Cinema and Royal Talkies.

From him, I got a glimpse of scenarios of the First-Friday shows when hundreds lined up for tickets. Many, however, would be without luck.

It was a grand occasions for Pocketmaars – pickpockets. With a shaving blade kept at folded palm, they stood at the ticket-line to slowly cut pockets of people.

If caught, his comrades suddenly sprang up from nowhere creating a crescent around him to outwardly side with the people but allow him to run away and obstruct ways if others ran after him.

And Blackiers, old Bambai term for ticket-hoarders, made windfall profits by selling a 50 Naya Paise ticket at Rs. 1, a princely sum then.

Imtiyaz was my greatest Source of information on the Bollywood and Bambai. He also gave me many story ideas.

Whenever I met him, I had a strange feeling of seeing scenes of Bicycle Thief of Vittorio De Sica sliding, one by one, before my eyes.

While Imtiyaz pasted filmy posters, Antonio, the hero of this post World War – II Italian neorealist film, did the same with bills of commercial advertisement.

Both had a common identity: poor! 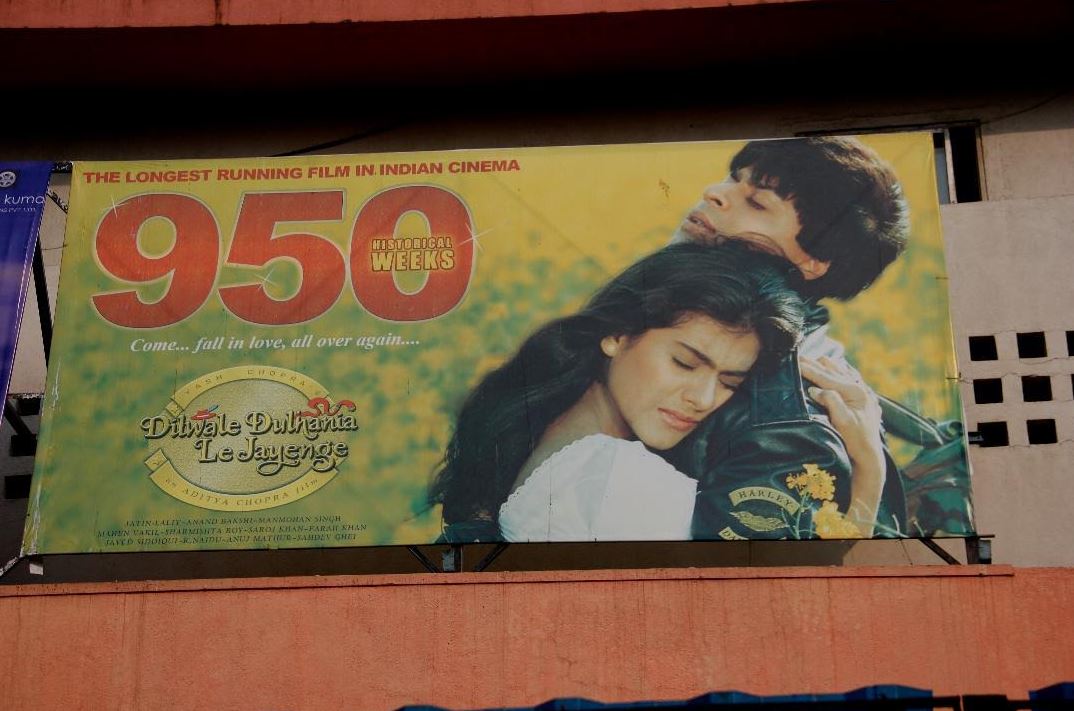 To Cool Imtiyaz Down, I cursed Mumbai’s Rain

I always liked Mumbai’s Pehla Vaarish: first splash of rain. But I had to curse it when I met Imtiyaz at his Haveli. As he was cursing it, I had to do so otherwise, he might have said to me Dafaa Ho Jaayo …. Get out, get lost….

He was cursing the rain as roof of his Haveli, unrepaired for years, developed some holes allowing waters to trespass inside his small living room damaging old film posters.

He was particularly angry as rainwater had fallen on Madhubala and Dilip Kumar in the poster of Mughal-e-Azam that his Abba Huzur himself had pasted. Posters of Hunterwali, Diamond Queen and Kismet, pasted in Bambai-walls by earlier Ali’s were also damaged.

He turned extremely angry when I suggested he should throw these damaged posters in a dust bean.

A Badmizaz Imtiyaz admonished me if I ever come to his Haveli and say anything unpalatable about posters, he will shout Dafaa Ho Jaayo at me.

Do You Believe in Reincarnation?

Soon after my last visit to that Haveli, my newspaper transferred me to New Delhi. In October, 2019, I came to Mumbai for personal works and just could not resist the temptations of meeting Imtiyaz.

I came at Nagpada but just could not find the Haveli as a multi-storied building stood there. I also did not find other known faces earlier living in nearby Jhuggi-Jhopri. They left the place to go elsewhere.

Totally confused, I walked up to laundry shop of Sultan Miyan lying at a little distant from that newly built high-rise. He was the closest friend of Imtiyaz.

Sultan told me Imtiyaz once suddenly vanished as he did earlier. 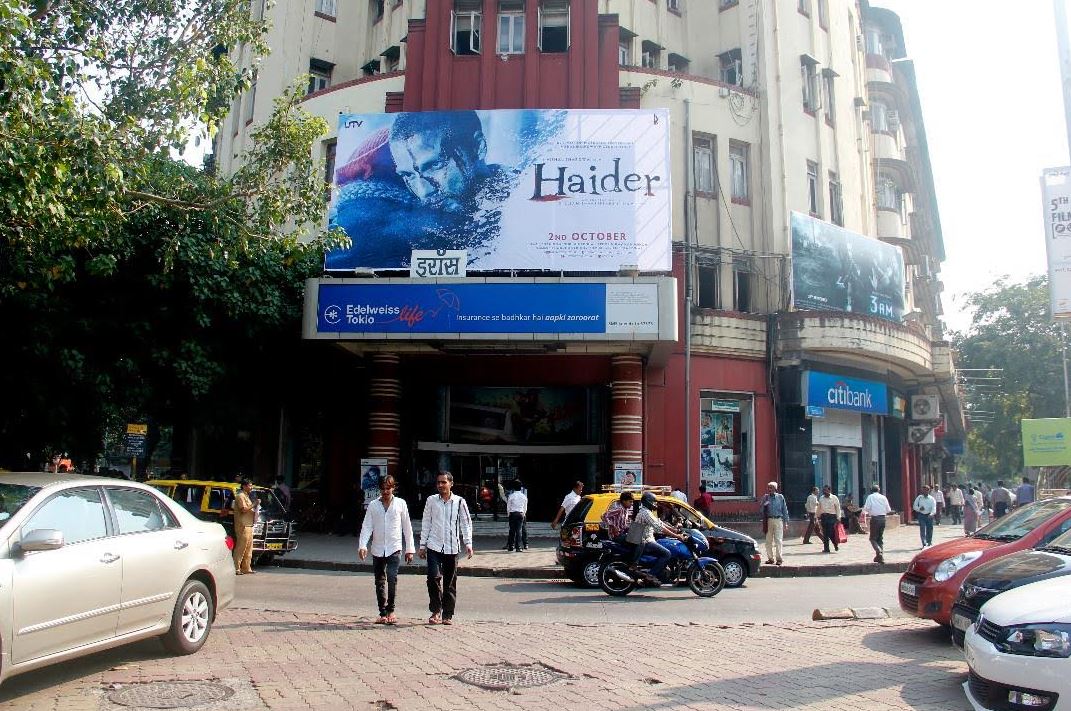 Only I knew Seth (Bambaiya term for Sahib still continuing in Mumbai) he went to Alibag to find out name of his ancestral hamlet, Sultan told me.

Imtiyaz divulged all his secrets to Sultan. Sultan knew Imtiyaz firmly believed he is a reincarnation of Akram otherwise how could both persons have arrow birthmark on right hand? It could have been in other parts of the body. Is is not?

Imtiyaz usually remained traceless for 15 or 20 days to return to his Haveli. This time, however, he did not return even after weeks rolled into months and months into years.

Meanwhile, a real estate developer started building a high-rise after buying the land from living in Jhuggi-Jhopri lying around the Haveli at throwaway prices. Imtiyaz’s property was simply grabbed as nobody claimed it.

And what happened to his film posters?

To my question, Sultan said: Seth, they were thrown as Kachda (rubbish) when his Haveli was demolished.

I don’t believe in reincarnation.

An Indoor Ski Park in Himachal - Really? 7 hours ago

Myths and Fears Around the Vaccine 7 hours ago