Marital abuse has certain aspects that the abused wife – it is a male crime barring very few exceptions – cannot even think of complaining to anyone, least to the machineries of law such as the police and the courts. The victim may even begin to believe that if she cannot bear the terrible abuse to her person, perhaps something is wrong with her and what is happening is misinterpreted by her as abuse. This, in brief, is the story of Criminal Justice – Behind Closed Doors, Series 2 that is being streamed on Disney Hotstar right now.

If this happened in a feature film, it would most certainly have been blocked from public exhibition by the self-defined standards of morality of the CBFC. So, fortunately, this could be made exclusively for an OTT platform open for viewing without the censor’s scissors cutting into tough scenes of extreme violence and perverted sex.

Though this is an Indianized adaptation of the Australian series of the same name spanning eight episodes instead of the original five, Criminal Justice – Behind Closed Doors is Indianized so well and so precisely that an Indian audience will find easy identification with the ambience, the characters, the incidents and the back stories of the various characters all fleshed out in varied shades of grey.

Almost every society greets the problem of domestic violence with a deafening silence. This is a silence that manufactures myths – that it does not happen among “educated people”; that only drunken men beat up their wives; that men beat wives because they truly love them, etc. This is a silence that encourages attitudes of self-blame, shame and resignation in women who face violence. Behind this silence lurks acceptance – that men have the right to use violence, while women should adjust and endure. An acceptance somewhere tacit, somewhere overt.

The number of women who are battered each year by their partners is unknown because of society's perception of domestic violence as a private matter, the failure of many victims to report abuse, and the knowledge that many police officers and judges dismiss abuse as inconsequential. This series directed with fine command over the audio-visual medium by Arjun Mukherjee and Rohan Sippy underlines the democratic and extremely patriotic nature of marital abuse that neatly cuts across class, status, ideology and everything else. We are introduced to Bikram Chandra (JIsshu Sengupta), a very successful, handsome, strapping young lawyer and his wife Anu (Kirti Kulhari) who appear to be a very successful and high-flying couple with a 12-year-old daughter Rhea, an ideal portrait of an ideal, post-modern, elite family living in a posh, well-appointed apartment in Mumbai.

But there is a crack. While Bikram is cool, confident, and a very caring and affectionate husband and father, Anu presents a picture of a very scared, diffident, completely confused and nervous woman who is forever afraid of failure – as a wife, a mother and even as a woman. She is a patient of chronic depression and phases of amnesia we are given to understand.

The very night Bikram has won a difficult case, Anu stabs him with a kitchen knife, suddenly, while they were having sex, calls a hospital and says that she has stabbed her husband. Then, she walks away out of the apartment, wanders aimlessly on the streets, and reaches the hospital just to utter one word “Sorry” to her badly injured husband as his stretcher is pulled into a cabin. The problem is – the daughter Rhea (Adiraj Sinha) has seen her mother from behind stabbing her father, as she was disturbed by strange noises from her parents’ bedroom. She pulls the knife from her father’s stomach which now carries her fingerprints.

From the very minute that Anu is arrested and taken to the police station, we are witness to the naked face of patriarchy in every place – the media, Anu’s snobbish, powerful and well-educated mother-in-law (Deepti Naval), the family’s lawyer friend Mandira (Mita Vashisht), the police and the legal fraternity and even Anu’s daughter who claims that Anu has committed the biggest crime – she has tried to kill her husband never mind. It is strange that this is what happens in a world where hundreds of wives are killed by their husbands for the slightest of non-reasons. They all conspire not only to pinpoint that Anu is a murderer but also to condemn her to a life within the women’s cell which for the background Anu comes from, is worse than death.

Anu confesses to her crime not once, but again and again to save her daughter from being a suspect and also because she actually is convinced that she has committed a heinous crime. Bikram dies somewhere along the way making Anu’s condition more pathetic. Her desperate appeals to meet her daughter are met with clever manipulations by the police staff to worsen her position as a murder accused.

The two supporters who back her are the simple but very intelligent lawyer Madhav Mishra and Nikhat Hussain, a young lawyer played by Anupriya Goenka despite the fact that she has already been blacklisted by her ex-boss Mandira who stand like a solid wall behind Anu though their client stubbornly refuses to open up.

When Mandira’s appointed lawyer fails to deliver, she promptly appoints a senior lawyer (Ashish Vidyarthy) who proudly claims that the duty of the woman is to light the lamp every evening and not go beyond that. He brings his feudal, patriarchal ideology to the court with him and makes it clear that he is determined to see Anu condemned to life imprisonment.

The police chief however, tries to look at the larger picture and questions himself about several loose ends behind the confession. His junior, married to another cop, is dead against Anu but his wife who works under him, begins to question herself about her own relationship with her biased husband and his dominant role in their sex life.

The cinematography is outstanding, changing shades and dimensions when the story moves between and among the flashbacks to Anu’s posh apartment, the police station, the courtroom and last, but never the least, the women’s cell of the prison which spans the small worlds within the larger world of patriarchy veiled and disguised under the sophisticated veneer that Bkiram envelops himself with, investing him with a glamorous, successful public image counterpointed with the image of Anu, the timid, scared, confused and sad wife. The cutting back and forth between Black-and-White and colour fulfills the demands of the commanding script.

The scenes inside the female cell are a revelation for viewers like us who form a major slice of the mainstream. They are scary, wild, brutal and cruel all at the same time. Each character, never mind how small, is complete unto itself realized brilliantly by the level of acting presented by the entire cast. Pankaj Tripathi as Madhav Mishra, the soft-spoken, low key, but very knowledgeable lawyer who is scared stiff of consummating his marriage is as brilliant as he always is, matched scene for scene by Anupriya Goenka. Kirti Kulhari suits the role of Anu to a tee and gives a very convincing performance. Jisshu Sengupta as the suave, handsome, diabolically intelligent Bikram is equally good. Deepti Naval as the snobbish, nose-in-the-air mother-in-law and Mita Vasisht as the ruthless, no-nonsense and arrogant Mandira is excellent.

The flashbacks into the murder scene and what went before are too repetitive and the closure is a bit melodramatic that does not fit into the serious tone of the tragedy of Anu’s story that went before. It is a series in which there is no place for a happily-ever-after ending. Criminal Justice – Behind Closed Doors, is certainly a not-to-be-missed series for focussing on an area of marital rape no one has ever dared attempt before. 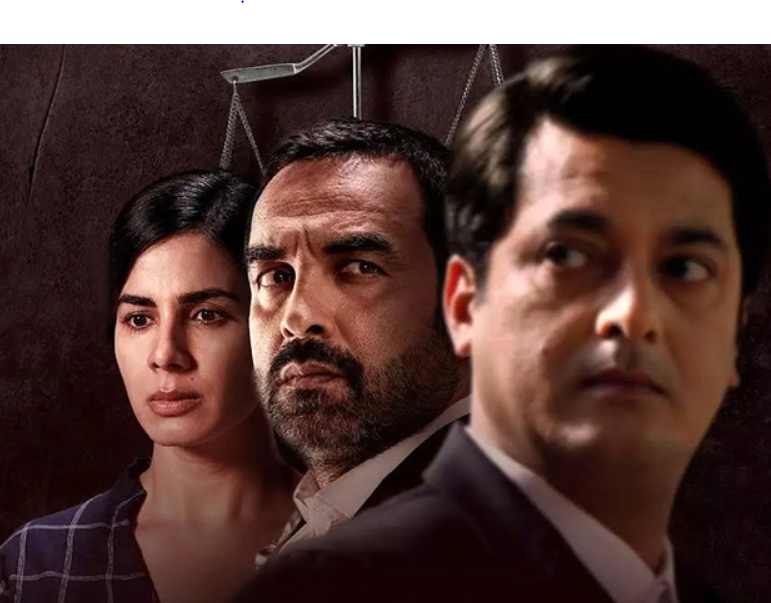